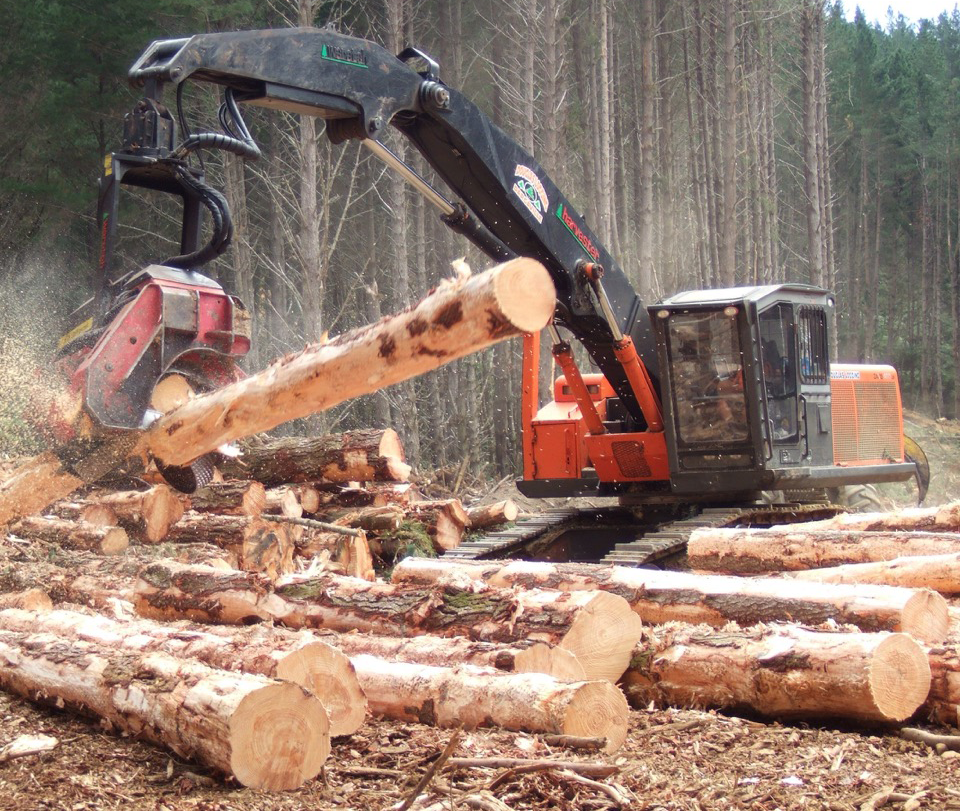 It doesn’t take a rocket scientist to understand that if New Zealand (or any developed nation for that matter) is to be internationally competitive, bolster exports and insulate the economy from fluctuating commodity cycles then focussing on value added commodities is the only way to go. So it is somewhat ironic then that the forestry industry, one of the country’s largest primary industries and our third largest export earner, has for decades, scarcely deviated from producing very basic commodity logs and timber goods. Despite producing some of the world’s finest, high quality timber with so much potential to add value, technology and innovation in the sector have been largely non-existent. The result? Not nearly enough of our precious high quality wood is being used for industries, such as housing, construction, and premium furniture manufacturing, that value and pay significant price premiums for high strength, high quality wood. Meaning New Zealand’s forestry sector is still largely synonymous with the production of rudimentary logs for low value, low revenue generating activities like pulp and paper. Hardly ideal.

Recognising the huge potential that technology can bring to NZ’s highly under-valued forestry industry, Christchurch-based Kiwi design and manufacturing company, Fibre-Gen is transforming NZ’s forestry sector into a high value as well as safer industry with its string of award winning hi-tech sonic products under its Hitman brand. CEO, Nigel Sharplin says compared to other manufacturing industries like the Japanese automobile sector who have been making strides since the 50s, the sector has been slow to innovate, particularly around the very early stages of the felling and wood processing value chain. The forestry industry is missing out on huge chunks of cash simply by selling unsegregated, high stiffness logs at no premium. Fibre-Gen’s Hitman sonic technologies are revolutionising this.

How? Sharplin says it all comes down to the bendiness of trees. Some trees are stiff and some are bendy. High stiffness makes for a higher quality and stronger wood suitable for engineered wood products thus enabling it to fetch far higher price premiums on the market. Mid stiffness and bendy wood on the other hand has fewer applications, for example, plywood, construction lumber and pulp which are only useful for low value markets. The only way to tell the difference between stem stiffness – i.e. timber quality – is through acoustics (or sonics). However, to date there has been no sonic technology on the market enabling the forest industry (forest owners) to measure the stiffness of the logs, and, accordingly, segregate them before they are transported to the mills for processing. Top shelf stiff timber gets lumped together with the bendy trailer trash for processing and forestry owners are squeezed out of a pretty price premium when potentially high value wood is sold with commodity price tags. Less than ideal for everyone involved. For a forestry owner its clear which market you’d prefer to be playing in if you had the tools available.

Designed to give foresters more bang for their buck at harvest time, Fibre-Gen’s range of world first, award winning sonic wood grading tools, including the HITMAN ST300 and the HITMAN HM200 (handheld devices that measure log stiffness and relative density to determine their value enabling better log segregation) fix this problem. And its fully automated sonic harvesting and segregation system, HITMAN PH330, due for release in the coming months, will totally revolutionise the global forestry sector says Sharplin.

Just through sonic measurement. Hitman’s handheld product range has been instrumental in helping the NZ forest industry derive hundreds of millions more dollars in value from essentially the same product and is now well embedded in the NZ market. Sharplin says Hitman’s tools are now considered the new gold standard for non-destructive forest wood stiffness measurement and segregation globally. Since launching in 2006, HITMAN products are sold worldwide to customers across China, the US, Canada, South America (especially Chile), Australia, the UK and Scandinavia and more recently, India.

And as foresters worldwide wise up to the value of wood segregation, international demand is steadily increasing. “What’s happening around the world is that because all the native forests have been largely either felled or are now protected, there’s a much heavier reliance on farmed trees to deliver high value product. And there’s a real demand to cut that fibre at a younger age. So countries are waking up to the fact that finding stronger wood in amongst the more bendy weaker wood is vital. But they need (our) technology to do that.” 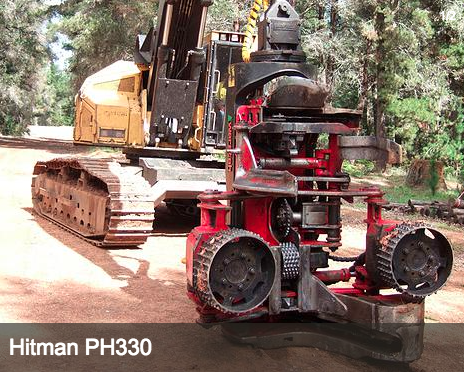 But Hitman’s handheld sonic solution range is only just the beginning. The company is thinking big and knows the real value for the forestry industry lies in a fully automated sonic harvesting system that harvests, measures and segregates wood according to its stiffness prior to making log cutting decisions. Its latest technology due to hit the NZ market early next year, the HITMAN PH330, is a world first, a fully automated harvester head sonic tool that does exactly this. Using scientifically proven and patented acoustic technology, HITMAN’s PH330 system enables forest owners to test wood stiffness and assess whether it is suitable or not for high-end building construction. “The best time to measure log quality is before log cutting. The biggest destruction of value after 30 years of forest nurture is at the point of log making when decisions are made about the grade of the wood without measuring the wood quality. But we can’t have men on the ground measuring. It’s too dangerous. So the industry is lumbered with huge waste in transporting and processing logs into structural products only to find they fail to meet the end product performance criteria”.

Sharplin is positive that, when launched early next year, the fully automated HITMAN PH330 system will be a global success. “This is a world first. The industry is crying out for this technology to be automated on a harvester head to achieve this. Right now there’s a significant loss of value in the forest industry for our customers. Our PH330 technology has customers all around the word waiting to buy this, it fits in with the international forest supply chain and will significantly optimise returns for forestry owners.”

From a macro economic perspective, Sharplin believes HITMAN’s cutting edge, high technology testing technology will add tens of millions of dollars to New Zealand’s multi-billion forest industry. His vision is to transform the industry from a $5 billion market to a more than $10 billion one over the next decade. Ambitious? Yes. But given HITMAN’s current track record, it will undoubtedly come to fruition. The company has also made the finals for the New Zealand Innovator of the Year Awards, 2015 with the technology.

“There’s a considerable volume of wood coming on stream in the next five to ten years from planting done twenty to thirty years ago. If we process that wood in the same way that we are currently, we will move from a five billion dollar industry up maybe seven or eight (just through increase in volumes). But if we can focus on understanding that new volume of wood and process it appropriately, making sure we send low value material to pulping mills and keeping high strength wood for engineered wood products, this same market will be worth twelve billion using our technology” .

He also believes the technology will bolster the profitability and economic viability of local regions such as Southland, Canterbury and Auckland since a fully optimised logging supply chain means local mills would be able to identify strong wood and turn it into construction lumber, which at the moment is not being done in any planned or strategic way. “Being able to measure log stiffness automatically means we can better support our Canterbury region and Auckland housing programmes without being overrun by foreign imported woods – as is happening in Australia. The level of imported lumber for building housing in Australia has reached fifteen percent – we don’t need this” .

If Sharplin’s predictions around the paybacks and cost savings for the industry are even half on the ball, not only does NZ’s forestry industry stand to gain significant international competitiveness, but also the company stands to gain a wealth of lucrative market opportunities internationally as countries worldwide wise up to the value of automated wood segregation. “I think this is such an important technology for NZ. Our second biggest export and we would expect the industry to see a five percent benefit from this technology coming into existence in terms of value. There’s not really anything else like it from a technology perspective that would generate that kind of return to the industry”.

But economic paybacks are just one of the many draw cards of the HITMAN PH330 automated harvester head tool. Safety benefits are also clear. Sharplin laments that current industry practice for measuring and segregating tree stiffness is fairly rudimentary, involving harvesters laying logs on the ground and manually measuring them. In short, a health and safety recipe for disaster. “In NZ we still have men on the ground (felling trees). Internationally that is absolutely illegal. This technology eliminates the manual testing on the ground and puts men in the cab for safety. So that’s also been a real key driver for us.”

He also candidly remarks that despite what its HITMAN brand name suggests, the PH330 technology does quite the opposite. Instead of causing casualties it significantly reduces them.

Fortunately, in an industry traditionally known for its conservatism towards technology Fibre-Gen has no known direct competitors on the global market and the company has been diligent in heavily patenting its technology to fend off copy cat rogues. Sharplin is quick to concede, however, that the company’s lack of competitors is likely to be only a momentary luxury so there will be no time for resting on its laurels. “We have no real competition at this stage, although we know that if we start realising value from it we are going to get competitors appearing so we are thinking very carefully about technology strategy going forward.”

Sharplin and his team are already looking at additional projects and forestry supply chain technologies that will further optimise returns for the industry. “At the end of the day wood competes with concrete, steel and the construction industry, all of which have very sophisticated supply chains. Our mission, following the implementation of the PH330 technology globally, will be focused in tracking those wood properties all the way through the supply chain. Our ambitions are not only to measure the quality of wood at harvest, but also develop technology that can capture and track the properties of wood all the way through to when timber products reach the end (paying) consumer. We’re looking for opportunities to revolutionise that whole value chain process”.

Having seen how HITMAN’s hi-tech solutions are already bringing the forestry industry one step closer towards taking a stand on the high value commodity podium, the company’s long term visions might just be the lift the industry needs.