After being established in 2011, Pure Advantage’s first phase of work looked at green growth opportunities for New Zealand and made the case for New Zealand joining the global “green race”.

In 2012, Pure Advantage commissioned research by Vivid Economics (London) and the University of Auckland Business School to survey and assess the global green growth situation and help identify New Zealand’s best opportunities in this arena. The initial result – New Zealand’s Position in the Green Race – used existing local and international examples to focus attention on how, when given the right policy incentives, the private sector has a large and very important role to play in driving green growth.

A second macroeconomic report – Green Growth: Opportunities for New Zealand – expanded upon, and brought specificity and economic rigour to, opportunities identified in the earlier research. This second report married the key economic advantages New Zealand enjoyed with areas of environmental performance that needed improvement. It showed that we can have the best of both worlds – but it takes leadership from our big businesses and politicians, significant investment and policy change to speed up the process. 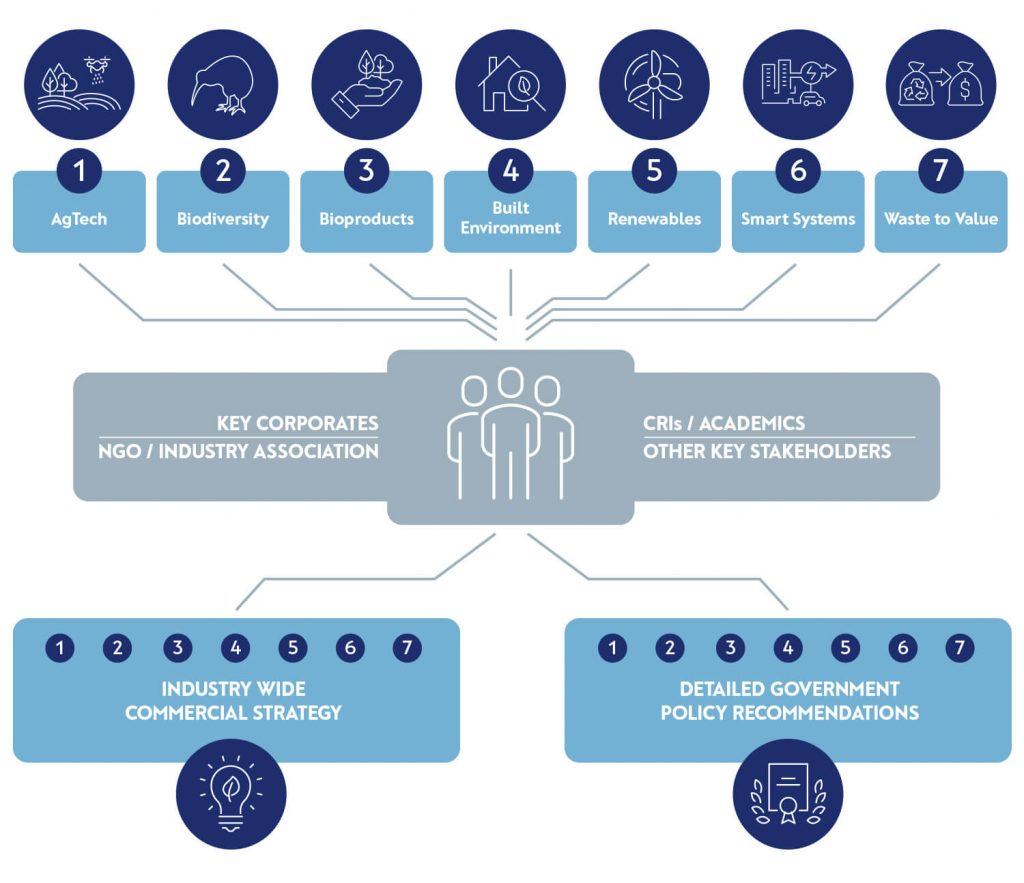 The second phase of our work involved launching a media platform to publish research reports and thought leader pieces relating to each of the advantages. Beyond simply promoting opportunities, this online content has sought to foster debate and catalyze action.

Our research has encompassed several substantial projects, including;

An Idea Whose Time Has Come (2015) looks at prefabricated homes as an environmentally focused design and supply solution to New Zealand’s housing issues.

Our Forest Future (2016) is a comprehensive discussion paper that identifies the economic and environmental benefits that will accrue from expanding our forests – in particular, native forests – and details a strategic framework by which these benefits might be achieved.  The paper has helped pave the way for the Trees That Count movement that aims to amplify and count native tree planting in New Zealand. Pure Advantage was a founding partner for the initiative and as part of the advisory board helped successfully secure $7 million in Regional Growth Funds to scale the program.

Pure Advantage was a member of the Joint Project Committee behind the release of Net Zero New Zealand (2017), a report that identifies several domestic emission reduction scenarios through which New Zealand can meet its obligations under the Paris Agreement. The report was authored by London-based Vivid Economics under contract to GLOBE-NZ, the national chapter of GLOBE-International – a worldwide association of parliamentarians working to protect and improve the environment.

To help make climate change an election issue, Pure Advantage conducted a Climate Survey (2017) of 1000 New Zealanders that revealed one in five felt the target (of a 30% reduction below 2005 levels by 2030) should go higher. Interestingly, this view was more prevalent among young New Zealanders, with one in three Kiwis under 25 wanting New Zealand to accelerate our efforts or set higher targets. Furthermore, those under 25 were significantly more likely to agree that measurement of economic growth in New Zealand (GDP) should include the impact of growth on the environment. Taken together, these generational variances provide evidence of an ideological shift in our thinking around climate change.

Given the current unprecedented rates and scales of political, environmental and economic change, Pure Advantage understands the requirement for flexibility and responsiveness in its work programme. While the seven advantages will continue to inform our thinking, future activities will proceed through a targeted schedule of campaigns that respond to opportunities and developments as they arise.