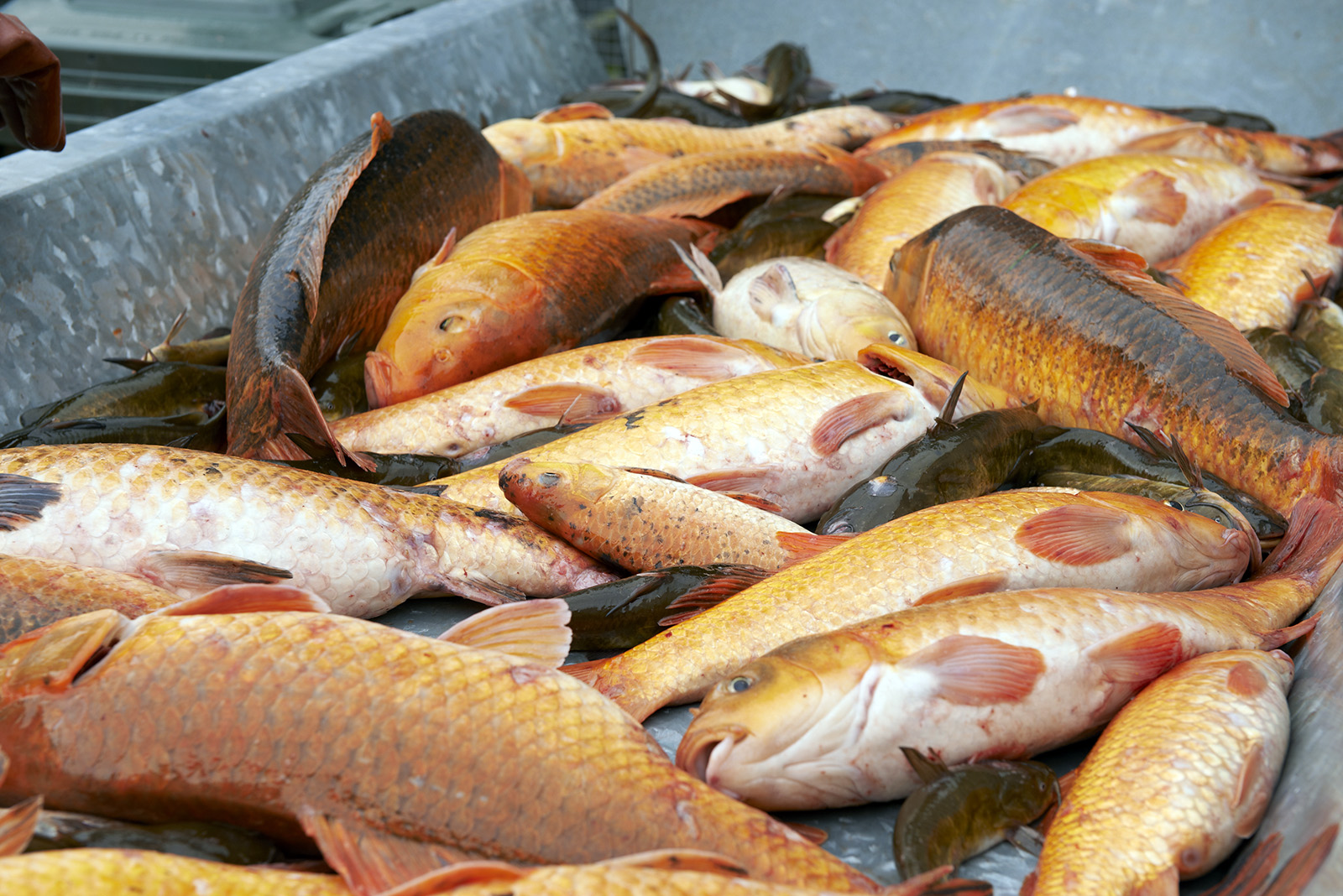 Beware the orange one

Wandering along the banks of most Waikato water bodies is a favourite past time for locals. Over the past few decades, it’s increasingly common to spy a flash of what looks like a giant goldfish. This lurid orange scamp is the carp…and it’s a real problem. Chugging along the bottom of the water column, these guys act like vacuums, hoovering up mud, plants, fish eggs and baby fish – stirring up the sediment and generally lowering water quality.

Invasive fish wreak havoc all over the world, and New Zealand plays host to several of them. Koi carp in all their orange-hued glory are particularly destructive; one of the worst in the world. Carp (Cyprinus carpio) are native to Asia, but now found on every continent except Antarctica. In New Zealand it was believed that carp may have accidentally arrived into the country in a consignment of goldfish in the late 1960s and by the early 80s their numbers in the wild had risen dramatically as they quickly colonised many waterways and changed the ecosystems significantly. Carp add significantly to the many pressures facing our freshwater ecosystems, including nutrient enrichment from agricultural activities.

These ecosystem changes combined make life pretty hard for our poor native freshwater fish, of which we have a tremendous number and variety. Examples include the tiny mudfish, an amazing little fish that can even survive short periods of time outside of the water by lowering their metabolism and ‘breathing’ through their skin. Koi carp munch on their eggs, their babies, take their food and generally mess up their home. With three quarters of our native fish species facing extinction, the effects of koi carp are unsustainable.

Koi carp are distinctive looking fish – bright orange (a Japanese ornamental variety) that can make up almost all the fish biomass in a waterway. This ‘orange tide’ needs to be removed which can be quite an undertaking due to sheer numbers and reproductive output, but the benefits for the freshwater ecosystem are inarguable. They aren’t good eating: most kiwis would turn their nose up at a plate of cooked carp. So until a few years ago, once they were hauled out, the large pile of fish had nowhere to go….

Dr Bruno David, a freshwater ecologist with the Waikato Regional Council, set his mind to solving the carp problem, and turning it into an opportunity. What if there was a way of using all that fish biomass by transforming it into another useful product? Of turning what is usually seen as just a single, isolated problem into a genuine opportunity to do good.

Bruno wasn’t interested in quick-fix solutions, but a closed loop approach that had wider benefits.

“I wanted to create a moralistic fertiliser that comes from an unwanted invasive animal, and use it as a replacement for high footprint imported fertiliser tabs.” – Dr Bruno David, Freshwater Ecologist

Koi carp consume lots of nutrients in their feeding process and these are stored in their flesh. That nutrient-rich product seemed ideally suited to use as a fertiliser. But how, and where?”

How they did it

Confronting the sheer volume of fish being extracted for freshwater ecosystem restoration saw the council invest in developing a trap and digester system. Koi are trapped in large numbers and hauled out of the waterway, and then funnelled into a digester system. The system breaks the fish flesh through the natural actions of thermophilic bacteria, which generate heat as they multiply and simultaneously dry the product out. The dehydrated organic fishmeal that results is then pressed into pellets without the need for additional binders or additives.

No innovation is without its risks and negatives. A key risk with fish traps is that they may also snare unwitting native species, which are for the most part (74%) threatened with extinction. The trap system was designed to enable native fish to escape and for the species to be identified and extracted for re-release if they are non-target. In four years, just three native fish have required rescue and have been quickly released back into a (much healthier) environment.

A key issue that can arise is the ‘boom and bust’ (pulsed) nature of carp migrations which requires careful management. Movement and capture of fish is largely dictated by seasonal water temperatures and rainfall events. One way the council has dealt with these unpredictable flows is to develop a way to safely ‘stockpile’ fish during low flow periods to better manage digester operation.

The koi carp pellets are manufactured locally, and their ecological footprint compares very favourably to the often imported products they can replace. Uses mooted for the fertiliser pellets include as an additive to potting mix in native plant propagation, as pellets in new holes dug for dune plantings and as a potential alternative bait in rat and stoat traps. Two examples are outlined below.

Dune ecosystems are some of our most threatened nationally, due to coastal development and other human pressures. Dunes are often nutrient-poor because of declining numbers of sea birds (their poo might smell gross, but it’s a really important part of the nutrient cycle). Waikato Beachcare groups are heavily involved in recolonising denuded coastal ecosystems with plantings of spinifex (Spinifex sericeus) and pingao (Ficinia spiralis).  Planting with tablets in dune ecosystems sees the nitrogen and phosphorous extracted from the lakes (stored in the flesh of the fish) deposited onto the dunes. Ordinarily, (usually imported) slow release fertiliser tablets are used in the planting holes to bolster early growth and improve survivorship. Some of these fertilisers are imported from a long way away and once they arrive at a planting day, they have a massive energy footprint. Council trials have demonstrated that the locally sourced koi pellets are at least as effective as the inorganic pellets (Bergin & Bergin, 2016), plus they come from just down the road and there are hardly any transport or production costs!

The same pellets used in dune system plantings have also been tested as a lure for trapping other terrestrial pests when setting DOC200 traps. Pests such as rats and stoats spell disaster for our native wildlife and a crucial part of conservation in New Zealand is reducing pest numbers to give our native species a chance to bounce back. The incredible success of Hamilton Halo and other pest control programmes around the country are all pieces of the puzzle toward our national goal of Predator Free New Zealand by 2050. Pest traps are commonly baited with a wide range of goodies, like peanut butter, rabbit and egg – but could the pellets have the same or even better effect?

In a preliminary collaborative trial with the Dunes Restoration Trust of New Zealand and the New Zealand Landcare Trust, 50 DOC200’s surrounding the predator proof fence at the new Rotopiko National Wetland Centre have been baited with alternating rabbit jerky/egg vs carp pellets to compare effectiveness. After four months the carp pellets have been performing particularly well on hedgehogs, capturing more than three times as many as the rabbit and egg option, and also performing slightly better for rats. Hedgehogs are hungry wee things and have a big impact on our native wildlife, so an effect lure for them is a great win. 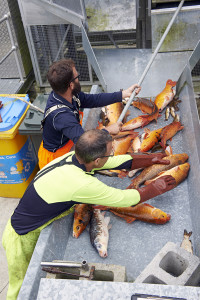 How is it a win win?

This project is potentially game-changing for our struggling freshwater ecosystems, but it’s more than just a solution to a pest problem. The project presents an opportunity for the council to sell the carp tablets to fund freshwater restoration projects such as targeted invasive fish removals, reducing the cost to rate payers, while providing communities with a locally-sourced, wholly organic fertiliser option – all while dealing to a very invasive species.

The project also represents an opportunity to collaborate with other organisations in the community, such as the New Zealand Bowhunters Society, who run the two-day World Koi Carp Classic in Huntly every year. In recognition of the multi-dimensional merits of the council’s approach, the project was the recipient of the 2014 Green Ribbon Award in the ‘Caring for our Water’ category and a KuDos Innovation Award for Science Excellence.

On the back of such success, one might expect the council to eagerly exploit the commercial merits of the concept. However, history tells us that an industry built on an invasive species creates environmentally perverse incentives that mean people fight to retain the invasive species to maintain industry, forgetting original intentions to eradicate them. In recognition of this, the council intends to make the process cost-neutral at best and eliminate such incentives from increasing and not reducing environmental harm.

Attempts to commercially control carp over decades in other countries have also failed to contain the biomass or spread of this fish.  This is primarily because the carp breeds so fast that the species is able to recover rapidly once local pressure is reduced (as catch rates fall below economically viable harvest levels). The council recognises this and considers that targeting priority catchments and maintaining pressure in specific localities can achieve a level of control that can reduce local impacts.

People can drop off fish they’ve caught for safe and ethical disposal at the council’s ‘Invasive fish recycling centre’. Contributors can rest assured that the material produced at the facility will be directed into positive environmental initiatives (e.g. as a replacement for synthetic high footprint restoration fertilisers). Additionally, the funding that could be derived from such sales has the potential to offset the costs of running the programme and potentially reduce, or with significant volume eliminate, costs of invasive freshwater species management for ratepayers.

This project began as one that focused on the removal of a single species, but the scope has broadened. Regional government has broad responsibilities in environmental management, and an effort has been made to ‘zoom out’ and consider how the successful trials might help solve other problems. The pressure on freshwater ecosystems from invasive species is a serious issue throughout New Zealand and the world and the closed loop model employed by the council might well be easily exportable. Back home in the Waikato, the successful roll-out of this programme spells the beginning of the end for carp and a much healthier future for our waterways and their native residents.