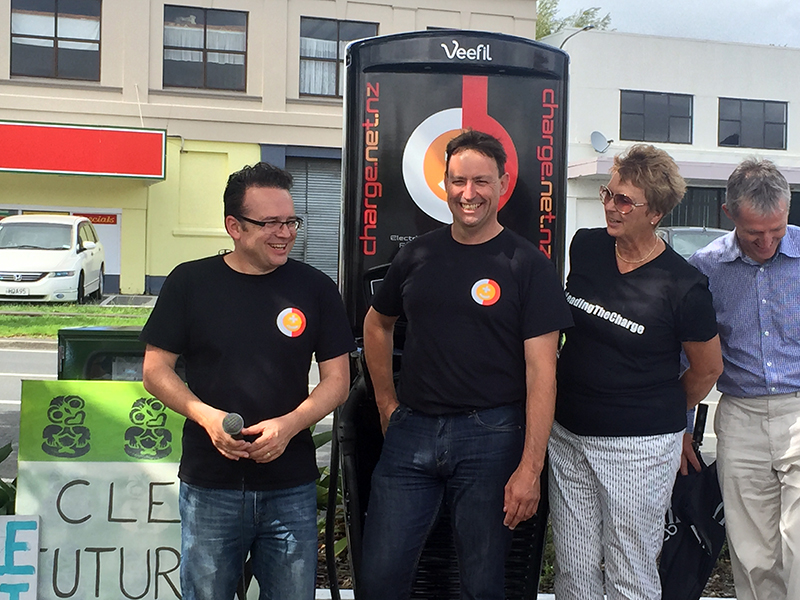 Readying Our Roads For The EV Onslaught

In the final instalment of our Global Entrepreneurship Week green growth series, we talk to a man who is future proofing New Zealand’s transport network.

This week in partnership with Pure Advantage and the Edmund Hillary Fellowship we’ve brought you inspiring stories of Kiwi entrepreneurs tackling problems in the areas of food, science media, housing, and pest control. Now we have a story that brings together the two parallel pillars of how we get around our nation — transport and energy.

Here’s something everybody knows, but hardly anybody realises: There are already tens of millions of electric vehicle (EV) charging stations currently installed in New Zealand – in our homes and businesses.

Yep – it’s the humble wall socket which, with the help of a couple of bog-standard extension cords, is quite capable of charging an EV.

Trouble is, a wall socket is going to take its sweet time charging a Tesla, a Nissan Leaf, or a Audi eTron. It will probably take all day and night.

But not all e-vehicle chargers are created equal. From your standard power socket, you move up the ladder to the type increasingly popping up outside shopping malls. They’re also the ones that EV owners have installed in their homes. They’re a fair bit quicker, but they still only deliver power at a moderate trickle, taking seven or so hours to charge your car’s battery to 80% capacity.

Then there’s the type Kiwi company ChargeNet NZ is installing. These units take it to a whole new level, power-hosing the electricity into your battery to bring it to 80% charge in around 25 minutes. That’s just enough time for a toilet stop and a cappuccino which, of course, is the idea.

ChargeNet’s mission is to make electric travel in New Zealand as achievable and easy as the fossil-fuel powered option, and to do it quickly.

In just one year, the company has installed 25 fast-charging units, with another dozen sites already under construction. And that rate is increasing – by the end of next year it aims to have 80 units on the sides of our roads.

“When you’re talking to someone about the prospect of owning an electric vehicle, the question they invariably ask is: ‘Can I drive my electric vehicle from Auckland to Wellington?’” says ChargeNet founder Steve West.

“We want to be able to answer that in the positive, without the trip taking days and you having to beg, borrow or steal power along the way.”

But with less than 2000 EVs currently in the country, ChargeNet is playing the long game.

In May this year the New Zealand Government finally came to the party, announcing its Electric Vehicles Programme, which aims to double the number of EVs on NZ roads every year, reaching 64,000 by 2021.

Alongside a $1m budget for education and the promotion of EVs each year, the EV Programme also features a contestable fund of up to $6m per year for low-emission-vehicle projects.

It’s a wise approach, says West. “The government is not an expert in this industry, so by encouraging the private sector to build the network it’s more likely to be the right one.” West cites the disastrous UK experience in building an EV network, where the charging stations put in were inadequate – suitable for charging electric bicycles, but not for vehicles. “They put in a whole lot of 13-amp power sockets. Too small, and without the right safety standards. Those are basically stranded assets now.

“As a government, you have to be really careful if you’re going to fund the cutting edge of technology. When you’re busy running a country, you’re not going to be an expert on EV charging infrastructure. The design of it [the EV Programme] is good.”

West says that the administrators of the EV Programme appear to favour multiple commercial partners collaborating on new projects, rather than single companies. “You end up with more sanity checking that way, which is a good thing. Also the scheme requires at least 50% funding for any project, so it has to be commercially viable.”

It will be a while before West’s company turns a profit, and he believes that State Highway One is, for now at least, the only road in the country where building the infrastructure is a viable proposition. “For example, the road up the West Coast is a great tourist route, but is totally unsustainable. You could not build a network of charging stations there and recover enough from its usage to justify the investment.

“It’s really all a matter of timing, because the forecasts for EV uptake tend to be exponential – we’re talking a doubling of EVs on the road each year. It may not be viable this year, or next year, but in five years it will be.”

West is certainly aiming to make the fast-charge network a sexy one, by installing the most state-of-the-art, slimline chargers on the market.

Known as Veefills, the powerful 50kW units are made by Australian company Tritium and aren’t cheap, at around $55,000 to buy and install. They are slimline units compared to most, which are generally bulky, box-shaped units.

Having a trans-Tasman supplier also means that technical issues are quickly solved, and communications are same-day.

They have found favour with innovative Kiwi energy company Z Energy, which has six ChargeNet stations on its forecourts, with more in the pipeline.

CEO and founder West has a former life as the hallowed creator of the globally successful Serato DJ software. The financial success of Serato has enabled him to further his avid interest in EV technology, obvious from the three Teslas in the garage. Two years ago he took to the road in his Tesla to show how difficult it was travelling round the country in an EV, and demonstrating EV technology to those drawn to his sleek maroon sedan. It’s also the reason he can afford to build a national charging network.

But it’s the ChargeNet software which may end up being of most value to his company as the industry progresses and more players enter the market. Already ChargeNet software operates on charging stations owned by other companies – it’s already the software of choice.

ChargeNet customers sign up to become members of the network at no fee and are sent a RFID tag – a small plastic fob which fits onto a key ring – which they receive in the post. They input their credit card details when they sign up, which are securely stored in a payment gateway, much like the Uber taxi model.

There is also the charge.net.nz website, which shows the customer where the charging stations are located across the country. Customers can check whether or not a charging station is occupied before they arrive at its location. If it’s occupied, they can then choose to either stop earlier, or drive further to the next one. 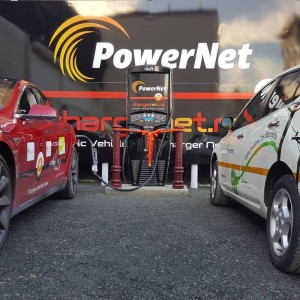 Customers can also use the units even if they don’t have a phone, provided they have joined the ChargeNet network.

“The advantage of our system over, say, a Paywave solution, is that because you’ve registered and we have your email address and your phone number, we will soon have the functionality to send you SMS messages or emails to say ‘your charge is complete’ or ‘someone’s waiting for the charging unit’.

Customers can also check whether or not a charging station is occupied before they arrive at its location, and whether there is someone else waiting for that station to be freed up. They can then choose to either stop earlier, or drive further to the next one.

“At this stage there’s so few EVs on the road that queues at the charging station rarely occur, but that functionality will become more important in the future and of course more charging stations will be required.”

West cites Whangarei as a good example. There are already three ChargeNet stations in the city, as Whangarei is already something of a national EV hotbed. “That’s thanks to Northpower, the lines company in that area, which was the first to install a fast charger in New Zealand,” says West.

So far, it’s only ChargeNet and a few electricity lines companies who are installing fast chargers. And ChargeNet is the only company with a rollout strategy over planned geographic locations. If the future’s electric, ChargeNet is already well ahead of the pack.

“We import $8b worth of fuel every year, so if we could turn that into using $2b worth of electricity a year – the cost of running an electricity powered New Zealand car fleet – which we generate locally, then as a country we are way better off.”

New Zealanders have a low average commute, with drivers in urban centres clocking up about 22 kilometres a day. 95 percent of daily travel demand is for distances less than 120 kilometres, which is within range of electric vehicles (approximately 150 kilometres per charge).