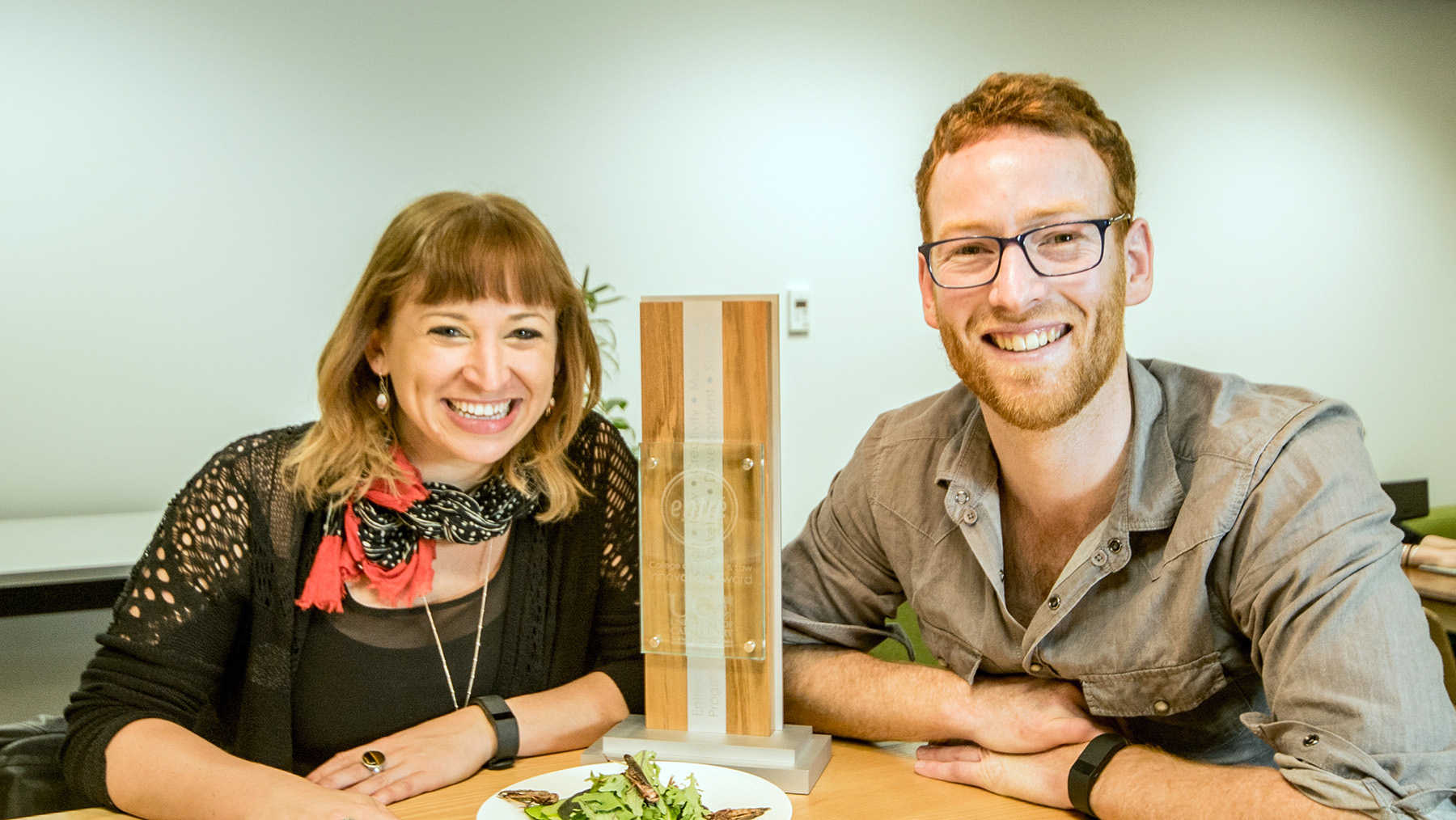 Prawns of the Sky?

They might have named them ‘Sky Prawns’, but there was no getting past what they really were: fried locusts, skewered with toothpicks, on a bed of mesclun salad.

But they breed ‘em tough in the South Island. The attendees of TEDx Christchurch got stuck in, devouring all 2000 locusts in double-quick time. They were now entomophagists, insectivorous beings, bug eaters.

“If we’d cooked 500 more, they would have eaten them,” says Rebecca De Prospo, one of the co-founders of Anteater, the company responsible for serving up the feast. “The first one is undoubtedly the hardest one, but once they tried it… well, some people ate 15 or 20.”

Anteater is a fledgling business – just six months old, but already co-founders De Prospo and Peter Randrop are making a living from it. So far, they offer just four products: the aforementioned Sky Prawn locusts; lemongrass ants – described as having the flavours of ‘lemongrass and kaffir lime, with a mild blue cheese aftertaste’; cricket powder – a savoury flour substitute with a nutty, earthy flavour; and the Kiwi staple huhu grubs. Three of the four Anteater products come from New Zealand, with cricket powder being the only exception. 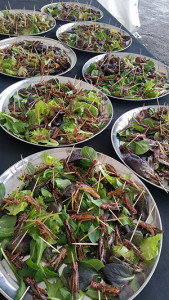 That offering is likely to expand, as the business identifies new products and markets. De Prospo and Randrop have recently returned from an exploratory trip to Thailand and Cambodia, where they dined on scorpions, spiders and bee larvae.

“If you swap out one meal per week of conventional meat for insect protein, you’re saving 100 square metres of land, your own bodyweight of carbon emissions and over two tonnes of blue water – precious fresh water,” says Randrop. “It’s a truly sustainable food choice.”

Eight months ago Randrop picked up a magazine in a supermarket and happened across an article about insects as a food source. As he read it he had a lightbulb moment, an epiphany. “I found out that farming insects uses 2000 times less water than beef farming, 100 times less emissions, ten times less land. It won’t be long before the world’s population reaches nine billion, food production will have to double – all these things. It was clear to me that insects were the perfect solution, so I decided to give it a crack.”

Up until that point Randrop was an ‘environmental vegetarian’ – eating meat only if it was wild mammalian pest meat – introduced deer, goat, wild pigs – which were by brought home by Randrop’s flatmate, an avid hunter.
“The only mammals that should be in New Zealand are bats, so eating those animals is doing the environment a favour here.”

Randrop went home, drew up a loose business pitch, and hurried off to Start-Up Weekend, an intensive and fun business event designed to help entrepreneurs workshop their business ideas. Randrop pitched his idea to the incredulous crowd on the Friday night which, taken with the novelty, voted it as one of the ideas that gets developed over the course of the weekend. Among that crowd was Rebecca De Prospo, and she joined the team formed to workshop it through the weekend. They did not win. But by Monday morning, De Prospo was all-in, and the business was on its way.

“To begin with we had a large team from that event,” say De Prospo. “Then people went back to their real lives and their real jobs – but Peter and I just couldn’t let it go.”

De Prospo is a graduate student of entrepreneurship, but the surreal circumstances of turning up for a fun weekend of learning about business strategising and emerging as a partner of an insect food business was not lost on her.

“It was amazing. It seemed totally insane when Peter pitched it, but very quickly it became something that I absolutely believed in. It certainly wasn’t what I was expecting but in many ways it’s probably the natural conclusion of the last eight years of my life.”

De Prospo was working as an operations manager for live events, but also an environmentalist and a passionate foodie. She realised she had the skills to complement Randrop’s.

She handed in her resignation six weeks ago to go full time on Anteater.

Randrop, a marine biologist, was working in the seaweed industry in Akaroa Harbour – both as a source of food and animal agriculture supplement. By the time he attended Start-Up Weekend with his crazy idea, he had already handed in his resignation, keen for a challenge but unsure of what it might be.

Just a week after Start Up Weekend, Peter had his first customer for lemongrass ants.

Two weeks later, De Prospo heard about the Entre $85k Challenge – a competition run by The University of Canterbury for young entrepreneurs. The entry deadline was that day, so De Prospo hastily put together the Anteater proposal. They made it through to the next round, and after months of mentorship, screening, testing and refining, Anteater was chosen for the grand prize of $85,000. “It’s huge for us. It means we’ll be solvent until such point as we take over the world,” she laughs.

With their radars tuned to news of the bug world, it didn’t take long to discover that there was already someone in New Zealand farming locusts.

“We found an article about locusts being served at a Dunedin restaurant. We rang them up and asked to speak to their supplier,” says Randrop.

Malcolm Diack had been supplying pet stores and zoos with locusts for the past six years and, coincidentally, was awarded his food licence at the same time Anteater was founded.

De Prospo and Randrop hit the road, travelling to Dunedin to pay Diack a visit.

“Malcolm had spent years trying to get a restaurant to give his locusts – his Sky Prawns – a shot. Fundamentally he’s a farmer – he doesn’t want to do sales or marketing, he just wants to produce a good product. We went down there and said, ‘look –- you want to farm locusts, we want to sell locusts. You produce as many as you can and we’ll sell them,” explains De Prospo.

“It was fantastic when we went to see him. The bug world is a strange world, and there’s not many of us in it. He’d clearly been living in this bug bubble by himself for six or seven years. He just couldn’t believe that he was able to sit down and have a really odd, but meaningful bug conversation with two other people – he was so relieved.”

Diack lives in an urban environment in Dunedin, and farms around 6000 locusts at any one time in a shed in his back yard. “That’s the great thing about them,” he says. “You don’t need a whole heap of space. It’s not like conventional farming where the animals are spread out across the surface of the earth – you can farm vertically with insects.”

Initially he farmed the locusts as a meal for his pet frogs, but realised quickly that he had a talent for it, and that it could easily be scaled up. “I sold them on Trademe as pet food – for lizards and frogs, but I always had the idea that they could be for the food trade. Anyone that came to my house had to try one – that was the deal. Back when I started, no one would consider eating an insect. That’s changing.”

De Prospo and Randrop struck a deal with Diack to become the exclusive distributors of his product.

So far, the lemongrass ants have been the most sought-after of Anteater’s products. “While the locusts are a meat substitute, the ants are more like a seasoning – they’re used in very small quantities and are a high-end product – like a black truffle, or saffron,” says De Prospo.

They’re also easier to get your head around. De Prospo and Randrop have identified the fine dining industry as being an effective way to get the insect message across.

Insects are already on the menu at Dunedin restaurant Vault 21 and Lyttelton restaurant Roots. And cricket powder now goes into the tortillas at national food chain restaurant Mexico.

“We found that the experiential side of dining is important, and there’s an added level of endorsement if a chef is preparing it for you,” says De Prospo.

“We want people to have a good experience with these products, rather than preparing sub-standard food at home, which is the worst thing that could happen to the industry. We want these products to be made in the most delicious way possible, so that once we’re past that barrier, people will know that this is good, healthy food.”

The case for insects.