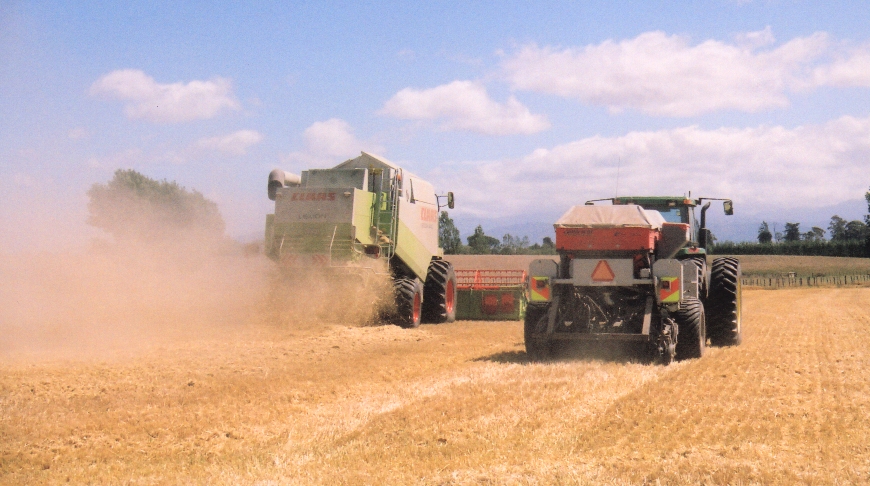 Low-disturbance no-tillage succeeds in all soils regardless of whether they are part of a home garden or a 1,000 hectare farmer’s field. In doing so, it contradicts much of what we were taught at school or university about soils and seeds. But science has a habit of doing that. As a one-time university Associate Professor, I am almost embarrassed to admit that I once taught the “benefits” of ploughing at university. It was only when I began researching no-tillage (and in particular, low-disturbance no-tillage) that I discovered that many of the principles I had been taught (and was myself re-teaching) were in fact myths. It turns out that many of them had been based on assumptions and misinterpreted observations rather than on scientific facts. For example:

We were taught that cultivating the soil kills weeds. This is both true and untrue. It’s true because cultivation buries existing weeds and pulverises others. It’s untrue because cultivation also stimulates the germination of thousands more weed seeds that had been dormant in the soil, and they then set about recolonising the area with new weeds. If you leave the soil undisturbed (as in low-disturbance no-tillage) fewer dormant weed seeds germinate. But you still need to kill those that are already growing by some method other than burial.

Options range from applying herbicides (which not everyone is in favour of) to crushing with a roller (knife rollers are best) or cutting (including the harvesting of a mature crop that has already smothered most weeds during its growing period), or surface hoeing (which is common in Africa).

Understandably, those who grow organic food find most herbicides unacceptable because they involve man-made formulations, even although the most common and effective man-made herbicide in the world (glyphosate or Roundup®) is also about the most environmentally-friendly herbicide ever invented. But other “natural” herbicides derived from extracts of natural products (like pine needles) are apparently acceptable to organic practices.

We were told that leaving crop residues on the soil surface would create increased pest and disease problems. This is also both true and untrue.

It is true that some pests such as mice, slugs, argentine stem weevil and springtails take advantage of the presence of the crop residues associated with low-disturbance no-tillage. But fortunately there are also effective control-strategies for all of these pests.

But other pest and disease problems have proven to be less of an issue in uncultivated soils than in cultivated soils because cultivation also kills the predators of those pests (the favourite meal of the native carabid beetle, for example, is slugs). In those situations, many farmers have found that they use less (rather than more) environmentally-unfriendly pesticides with low-disturbance no-tillage than they did previously with conventional tillage.

We were taught that crop seedlings prefer cultivated soil because it is easier to emerge from loosened soil than from un-loosened soil. Again this can be true or untrue in different circumstances. It can be true if the upper layers of the undisturbed soil have been compacted by animal or vehicle traffic or the surface has become sealed by impact of heavy rainfall events. But rainfall sealing (or capping) of soil usually only occurs if the soil has already lost its structure through frequent tillage in the first place.

Few seedlings have any bother emerging from undamaged well-structured and un-compacted untilled soil. Shoots often weave around soil obstacles rather than try to push straight through them. Or they wait until rain softens them.

We were told that unploughed soils would get harder and harder over time and become unmanageable.

In reality, exactly the opposite has happened. They have become more “mellow” as evidenced by the fact that the power required to pull a low-disturbance no-tillage drill through them, almost invariably decreases with time. 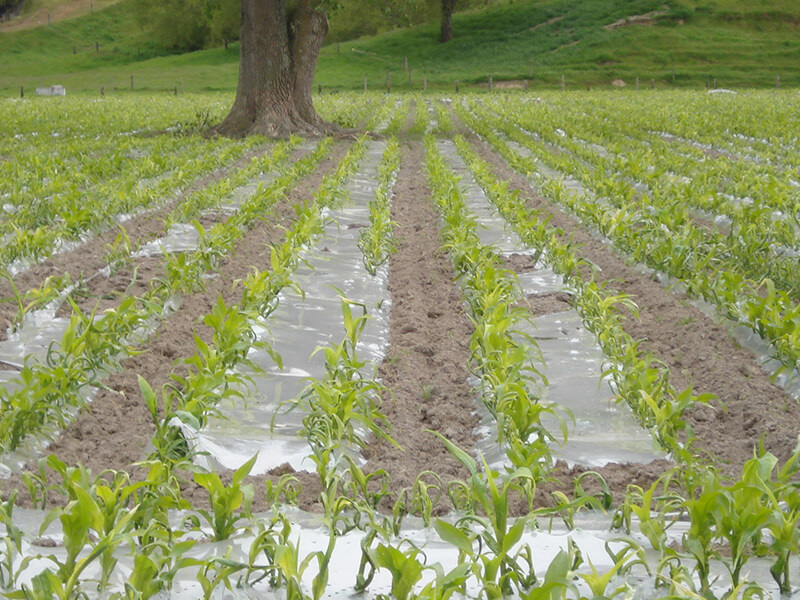 Man’s misguided attempt to capture soil water vapour is to till the soil (which discharges water vapour anyway) and then cover the tilled soil with plastic to try and hold what remains of the water vapour in. Wouldn’t it be easier and cheaper to not till the soil in the first place and retain a surface mulch of crop residues, as above? It is a bit like closing the soil after the horse has bolted.

We were taught that soil needs periodic “sweetening” by aeration. While it is true that plant roots breathe and therefore require an atmosphere of soil air around them, it is a matter of having the right amount of soil air present. Not too much and not too little.

A well-structured undisturbed soil with abundant soil life (consisting of microbes, small animals like earthworms, and actively growing plant roots) is usually nearly perfect for root growth. In fact, keeping it this way is one of the vital functions that healthy soil biology performs. It is only when compaction or water saturation excludes air from the soil that problems start.

But cultivating the soil does not solve this problem either because it introduces far too much air. Further, cultivation destroys the vital soil structure that only active soil biology can create when microbes bind fine individual soil particles together into crumb-like clusters using glue-like exudates. Mechanically-pulverised soil allows fine soil particles to run together to puddle when wet and bake hard when dry. The net effect of tilling the soil may be to “instantly” alleviate a poor aeration problem, but it will only exacerbate the problem in the longer term. Improved drainage and/or improved organic matter are better long-term fixes for compacted or anaerobic soils.

Cultivation not only destroys soil structure by mechanically pulverising the soil, it physically kills many of the microbes that create that soil structure in the first place as well as reducing rather than improving the organic matter that feeds them all.

We were taught that a fine, firm seedbed is needed to get maximum seed-to-soil contact and thereby ensure that germination takes place. But we now know that seeds get their water for germination from two sources – not just one. They do indeed get liquid water from contact with damp soil particles. So in that sense seed-to-soil contact is still important, especially if the soil has been disturbed prior to, or during seeding.

But seeds also get water in vapour form (humidity) from the soil air that surrounds them even if there is no seed-to-soil contact or liquid water at all (Wuest, 2002). This occurs only if the soil humidity that surrounds the seeds has not been allowed to dissipate into the atmosphere (along with some of the soil CO2), which happens when the soil is cultivated and aerated, even if only within a sown row.

The best low-disturbance no-tillage machines specialise in retaining soil humidity in the sown row by sealing each slot with a mulch of surface residues during the seeding process. This prevents the soil humidity from escaping (while at the same time allowing the soil to breathe) thereby ensuring that the seeds are always in a humid environment and therefore will always germinate (Baker et al, 2006).

Loose soil covering seeds simply doesn’t do this. It is too porous, even although it might be better than no cover at all. General cultivation, minimum tillage, high-disturbance no-tillage and strip tillage do not trap soil humidity in the seed zone either. Any technique that loosens the soil therefore relies on liquid water from soil-to-seed contact alone, which in turn relies on rainfall or irrigation. 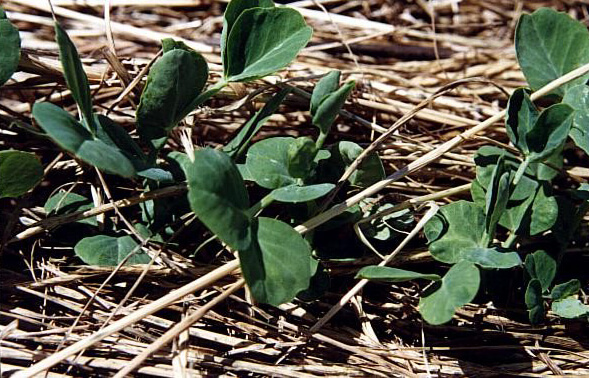 This reliance on liquid soil water characterises how agriculture has functioned (including its periodic failures) for centuries. The importance of soil humidity and how it can be harnessed was only discovered in the mid-1970s (Baker et al 2006).

We were taught that cultivation allows seedbeds to be smoothed, thereby ensuring that all seeds are sown at a consistent depth. This is true, which has placed a lot of responsibility on the designers of low-disturbance no-tillage machines to come up with superior surface-following mechanisms in the absence of smoothing of the soil surface by tillage.

Unfortunately not all designs of low-disturbance no-tillage seed drill openers do achieve consistent seeding depths. But the best of them do. They have more sophisticated seeding-depth-control mechanisms than any seed drill for sowing into cultivated soils has ever had.

We were taught that during cultivation, one aim is to produce a clean “trash-free” seedbed so as to make the passage of seed drills or planting by hand most effective. Producing “clean seedbeds” was also a matter of pride amongst farmers and home gardeners alike. It may have made farmers and gardeners feel good, but on farms especially, it fed the local seagulls and starlings. We were led to believe that this was a good thing as the birds were eating soil pests. But now we know that the birds were primarily eating earthworms, which are otherwise nature’s best soil ally and cultivation simply makes sure that nature keeps losing the battle to keep them in our soils.

Not only is it important to keep every possible earthworm alive and active in the soil (there are plenty of other food sources for birds) we now know that “farming ugly” is more beneficial that “clean seedbeds”. “Farming ugly” means leaving as much (“ugly”) crop residue as possible on the surface of a field or garden after harvest as the source of carbon for the next crop and its soil microbes, and to ensure that the soil humidity remains trapped in the soil during and after the next seeding event. 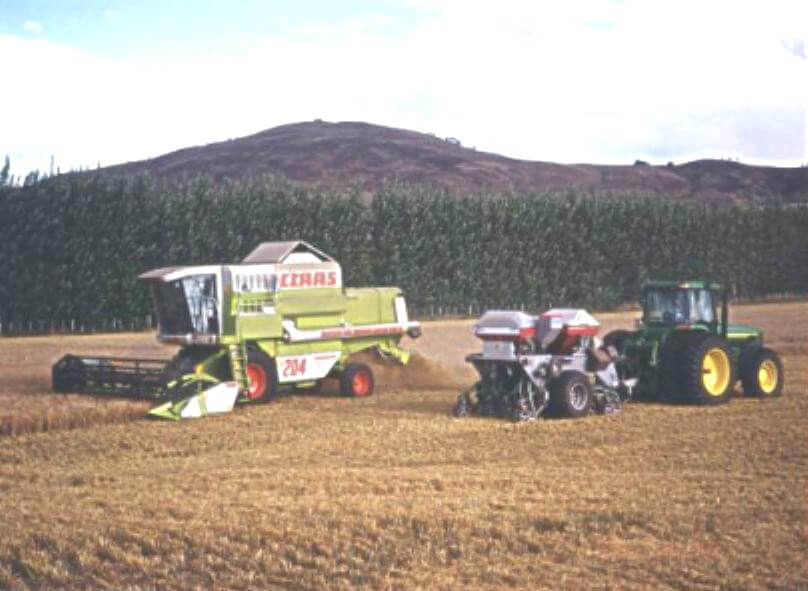 In fact, water infiltration is much faster into a healthy uncultivated soil than a cultivated soil, especially if there is a crop growing in it, or there are crop residues lying on its surface. Vegetation on the soil (living or dead) slows down runoff, allowing more time for rainfall to soak in. More importantly, the organic matter supports greater biological activity in the soil, which in turn creates earthworm and old root channels as conduits for water entry.

And when you consider that 1 kg of humus holds as much water as 9 kg of clay, it is no surprise that soils that are high in organic matter have much greater water holding capacity than soils with less organic matter.

We were told that cultivation mineralises nitrogen which gives a boost to new seedlings as they start to grow and that therefore no-tilled seedlings would be nitrogen-starved.

This is true, which is why the best low-disturbance no-tillage machines are able to apply bagged or liquid fertilizer (organic or inorganic) alongside (but not touching) the seeds during seeding. Besides, we now know that most of the mineralised nitrogen in a cultivated soil comes from the organic matter in that soil and this further “mines” (and reduces) this precious soil resource.

All of this begs the question “Why did we ever cultivate the soil in the first place” and the only defendable answer is to kill weeds.