What is Ecological Economics? A neglected discipline.

“Ecological Economics (EE) is an applied, trans-disciplinary field of inquiry established in the 1980’s. Its foundation lies in assessment of (1) the ecological scale and carrying capacity of natural systems, using Natural Sciences; (2) social fairness and distribution, drawing on Social Sciences; and (3) designing systems and institutions for efficient allocation bringing together Economics, Political Science, Planning, and other disciplines. EE investigates at multiple scales (local, regional, global) the complementary use of Natural, Built, Social, and Human Capital as the building blocks and production factors required for sustainable societies. Collaboration and participation are essential to EE as is integration based on sound design and action research principles. This field differs markedly from Environmental/Resource Economics in that these disciplines apply Economics theory to Environmental issues, whereas EE aims to re-design and provide alternative pathways.

“EERNZ aims to produce research results that are of practical use to stakeholders both directly and in the sense of promoting new ways of thinking about both economic and environmental policy. Our core areas of current research expertise include: biophysical analysis of economic processes; sustainability indicators and modeling; environmental valuation; industrial and urban ecology; the economics of sustainability options; spatial analysis in ecological economics; ecosystems services; environmental accounting of the macro-economy; participatory processes, system dynamics and mediated modeling.

“Our research goal is to explore the ways the quality of the New Zealand environment can be maintained and enhanced while still allowing the economy and people of New Zealand to prosper.” 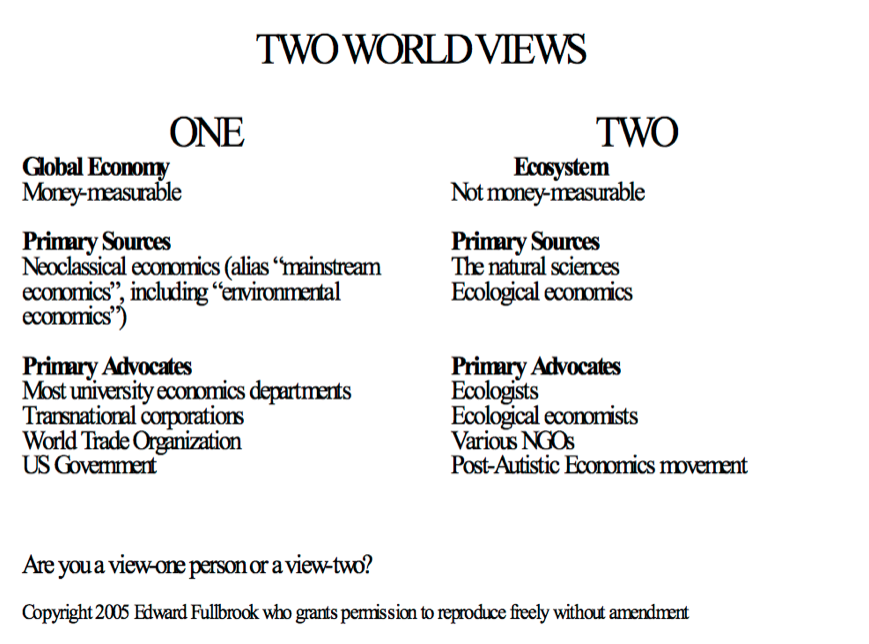 Consider the opening picture in this article. Downstream the Waimakariri River provides water for irrigation, industrial and domestic use and recreation. Some aquifers are fed by the river. The river also supplies gravel for concrete, filters and unsealed roads. Sand carried to the coast maintains beaches in the face of coastal erosion. The gravel flow has led engineers to conclude that considerable renewable energy generation from a high dam would be short-lived as the lake would soon be filled to the top with gravel. Today’s engineers have learned from mistakes of the past. The Waihopai (Marlborough) dam, built in the early 20th century, suffered this fate in about 20 years. That present hydro plant is an inefficient run of the river scheme.

A sound economic model for management of the Waimakariri catchment and Canterbury Plains and coast will take account of all these factors. Ecological economics tools are more appropriate than a neoclassical economics approach focussed on money. 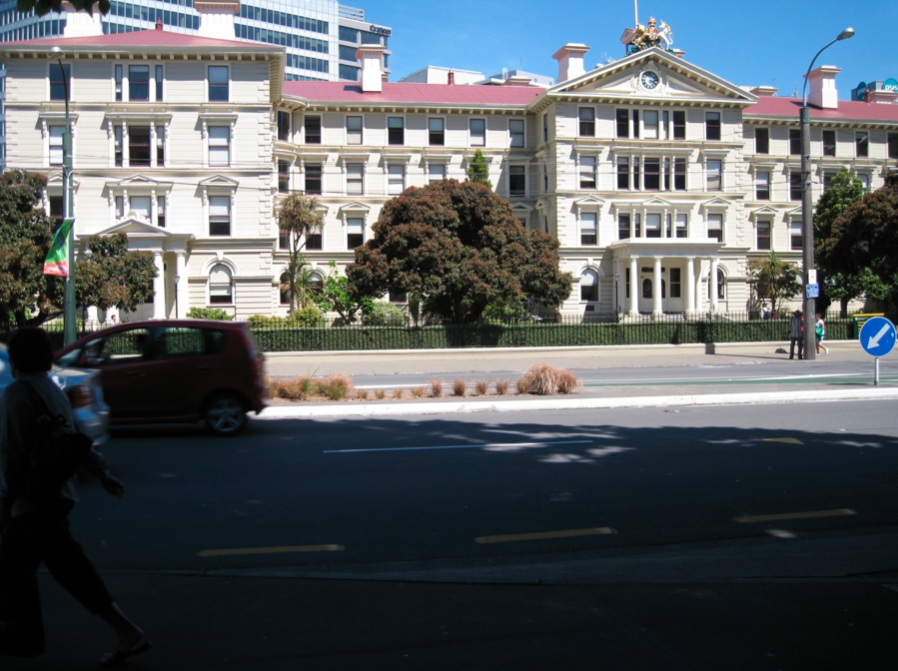 The old government building, situated on Lambton Quay in Wellington.

Another example of potential for application of ecological economics: The old government building (pictured) is situated on Lambton Quay in Wellington. It was completed in 1876, and until 1998 was the second-largest wooden building in the world. Except in special circumstances, ecological economists favour timber construction over brick, concrete and steel because timber is mostly sequestered carbon, whereas manufactures of brick, concrete and steel involve large scale emissions of the greenhouse gas carbon dioxide. There’s a historic irony in this example because kauri timber was chosen for the building only because cement and stone were more expensive at that time. Had stone been chosen, the building would probably have been irreparably damaged by one of the earthquakes which followed its construction. Timber construction of this important public building was considered to be demeaning of New Zealand in the 19th century. Often today large wooden buildings elicit interest and pride. Modern laminated timber technology allows the construction of large, high rise timber buildings

Ecological economists have developed alternatives to money-based measures used by mainstream economists. Readers will be familiar with Gross Domestic Product (GDP). This is defined as “the market value of the final goods and services produced in a country in a given period.” This includes defensive expenditures (money spent to prevent or repair physical or social damage). So, the Canterbury earthquakes increased GDP because of the increased expenditure on demolition, repairs and reconstruction. The cost of New Zealand domestic violence has been estimated to exceed the value of the agriculture, farming and fisheries industries combined (Herbert and MacKenzie 2014).

I doubt if you could find a New Zealand economist unaware of limitations of GDP. After all, Simon Kuznets (1934), the inventor of the concept of GDP, in his first report to the US Congress, said “The welfare of a nation [can] scarcely be inferred from a measure of income.” Nevertheless politicians and mainstream economists are frequently heard reporting that the NZ economy is thriving because of ‘healthy GDP growth.’

Ecological economists have developed the Genuine Progress Indicator (GPI) which seems to me to be the most realistic measure of welfare. In the following table I summarize the differing ways in which various components of the economy are treated by GDP and GPI.  For instance voluntary work increases GPI ( +), but is not included in GDP (0). 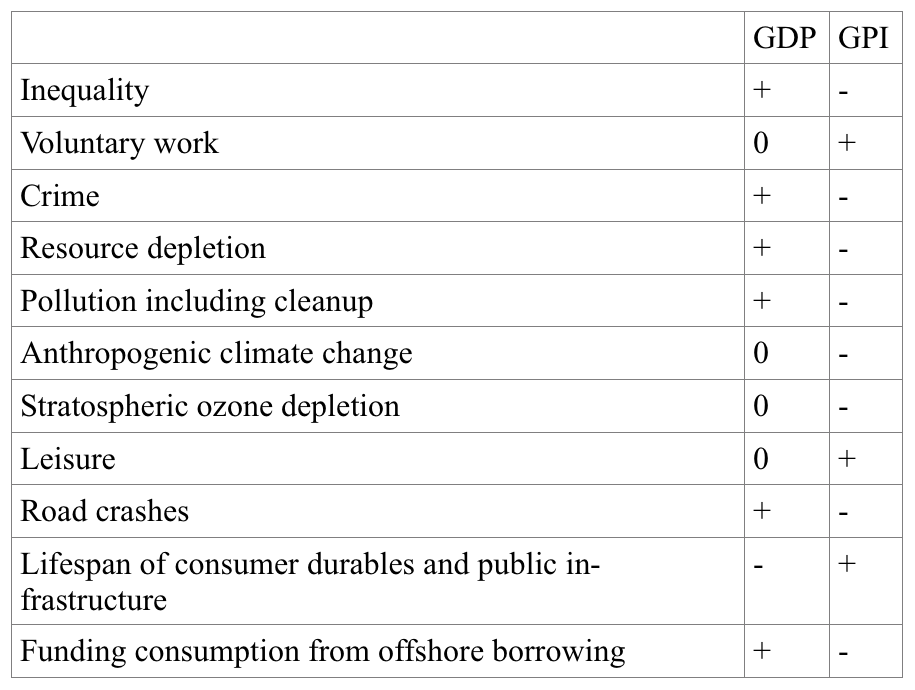 GPI is much more difficult to determine than GDP. For most countries GDP is increasing but GPI is decreasing.

Ecological Footprint was defined in 1992 by University of British Columbia ecological economists William Rees and Mathis Wackernagel as “the aggregate area of land and water in various ecological categories that is claimed by participants in the economy to produce all the resources they consume and to absorb all the wastes they produce on a continuing basis, using prevailing technology.”

My updated definition of Biocapacity is “the biologically productive area of a country, (including its exclusive economic zone of ocean and perhaps wider areas of ocean) capable of generating an on-going supply of renewable resources and absorbing its spillover wastes without lasting harmful effects.”

Some public agencies such as Landcare (who have estimated NZ’s ecological footprint ) are doing ecological economics research. Some regional councils are using ecological economics principles as far as their legal remits allow. Victoria University has appointed ecological economist Marjan van den Belt as Assistant Vice Chancellor (Sustainability) to apply ecological economics concepts in leading this civic university to do sustainability well, contribute to sustainable development and be known for it. One example of the many papers that include sustainability, is Environment and Resources 114, where students are taught to integrate the physical, social, economic, and political factors associated with environmental change. First, the course introduces the earth systems associated with environmental change (both natural and human induced). Second, the course explores the social, political and economic implications of contemporary environmental issues and human-environment relations. 240 students are taking this course. Associate Professor van den Belt thinks NZ has a lot to offer in being a leader in sustainable development through research and teaching. She says people do try to use a systems approach as they learn new ways of thinking but we have a way to go in using systems approaches effectively, making the good work visible and doing more of it so that we may transform an economic system into one that consistently recognizes the benefits of our ecosystems as the foundation for social, cultural and economic well-being.

Andrew, Robbie and Forgie, Vicky. 2011. An analysis of New Zealand’s Ecological Footprint as Estimated  by the Global Footprint Network: An Update.