When doors open at the end of the school day, kids spill outside, hoping to catch a few last minutes with their friends. Even on the shortest day of the year they tumble out into daylight. Solar makes up a tiny fraction of New Zealand’s electricity supply. In December 2014 New Zealand’s total installed capacity was only 18.8 MW, approximately 2% the capacity of our largest hydro power station at Manapouri. While we’ve got plentiful sunlight hours we’re even more blessed with other renewable resources such as wind, hydro, and geothermal.

Accordingly solar power is unlikely to be competitive with New Zealand wholesale electricity rates in the medium term. However, since solar power is ideally suited to installation at the point of demand – on residential and commercial properties – it is already competitive with retail electricity prices. The most obvious example is customers whose need perfectly matches sunlight hours; schools. Other strong candidates are locations that enjoy high sunlight hours but are remote from New Zealand’s grid scale electricity generation. For example, under the Electricity Authority’s proposed changes to its Transmission Pricing Methodology, Northland customers are facing dramatic increases in their line charges. Solar energy could be used to create distributed electricity generation thereby reducing the dependency of remote locations on expensive transmission infrastructure.

The high retail cost of imported petrol and diesel means that solar energy in New Zealand is also competitive as a transportation fuel. The average New Zealand car travels 12,000 km per year with a fuel efficiency of 10km per litre. With the March 2015 median fuel cost of 91 octane petrol at $1.79, the average annual fuel cost is approximately $2,148. By replacing a fossil fuel sedan with a Telsa S electric car and charging exclusively with solar energy (even in the depths of winter), the solar panels and battery would pay for itself within 10 years, after which the car’s fuel would be free.

Few countries enjoy New Zealand’s rich array of renewable energy sources and yet the sun provides enough energy in one hour to meet the world’s energy demands for an entire year. Consequently solar energy plays a much larger role in other countries’ efforts to reduce their carbon emissions. More than 1.4 million homes in Australia have installed solar panels since 2001. This is the largest per capita installation rate of any country and was promoted by government guaranteed feed-in tariffs. Even without these tariffs solar photovoltaic energy is now cost effective in all major Australian cities other than Melbourne.

Germany – which has the same amount of direct sunshine hours as Alaska – also promoted a wave of solar installations by offering priority feed-in to the grid for surplus generation. Because Germany offered feed-in tariff guarantees to businesses as well as consumers, more than 85% of Germany’s solar photovoltaic generation comes from systems larger than 10 kilowatts whereas most Australia solar generation comes from residential systems of less than 5 kilowatt capacity. This German policy has been the single biggest driver of the Swanson rule over the past decade as Chinese factories expanded to meet strong German demand. 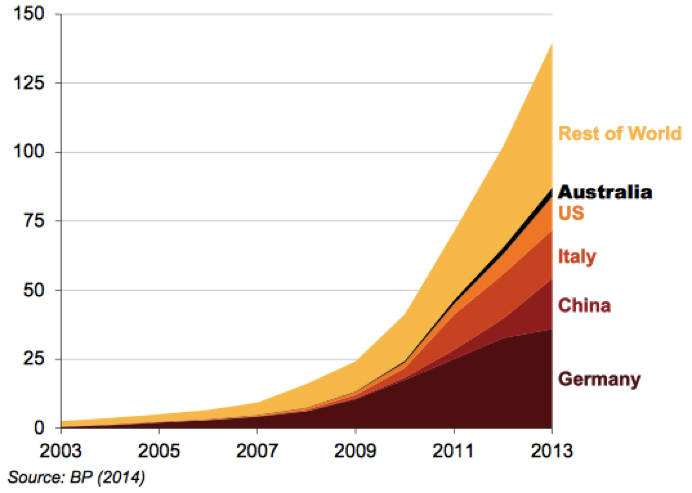 In the long term, solar will become competitive even at wholesale prices in New Zealand. As predicted by Swanson’s law the price of solar panels have fallen precipitously over the past three decades. Swanson’s law is the renewable energy equivalent of Moore’s law which suggested that the cost of computer processing power would half every 18 months. Richard Swanson, the founder of SunPower, a major American solar manufacturer, projected that the cost of photovoltaic cells would fall by 20% with every doubling of global manufacturing capacity.   Thirty-five years ago solar generation cost US$30 per kilowatt hour. Today solar photovoltaic generation is one hundred times cheaper. Modern photovoltaic generation now costs less than US$0.30 per kilowatt hour. By comparison, natural gas-fired plants cost approximately US$1.00 to build in the United States before the cost of fuel is added. 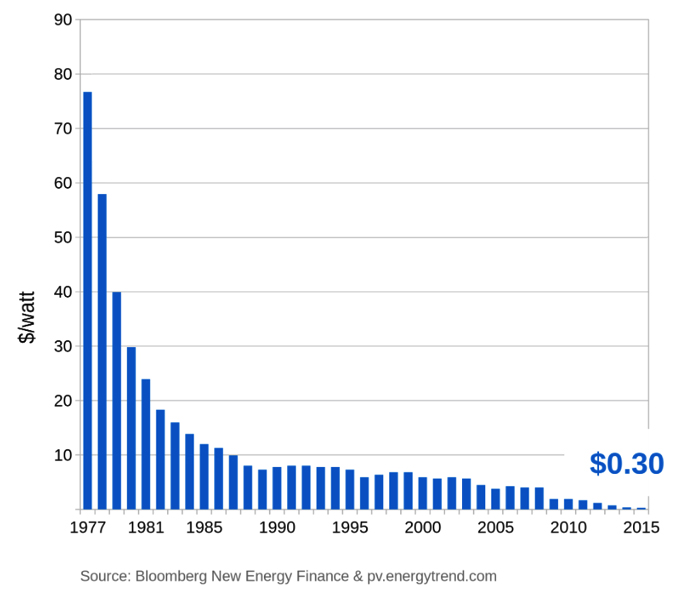 International research is seeking to increase the proportion of solar radiation converted into usable energy. One promising technology under development at the Swiss Federal Laboratories for Materials Science and Technology creates extraordinarily thin iron oxide and tungsten oxide films within Photoelectrochemical (PEC) cells. The iron oxide absorbs visible light while the tungsten oxide absorbs ultraviolet. As it turns out biomimicry could have fast-tracked their research. The microstructure of the PEC cells mirrors the inside of a moth’s eye. Moths have evolved the ability to collect as much as light as possible to see in the dark, and to limit reflected light which could alert predators. Technological advances such as these have not yet entered large scale manufacture which means that Swanson’s law still has many years to run.

Solar energy is driving growth in high tech green jobs close to home. Seeking to capture engineering talent at Canterbury University, Silicon Valley based company, Enphase Energy, recently announced the expansion of its global engineering facility in Christchurch. The new Middleton facility will support the design, development and testing of its microinverters which convert the direct current (DC) generated by a solar panel into the alternating current (AC) used by home appliances.

Entrepreneurs are also innovating financial models to promote solar energy. For example New Zealand’s Solarcity, offers rooftop leases whereby it purchases and installs solar panels. Its consumers then make monthly payments (of less than their previous grid-connected electricity bill). Similar companies in the US then on-sell the future income streams as bonds to outside investors achieving a cost of capital in the US of 2% to 3% lower than that for mainstream utilities.