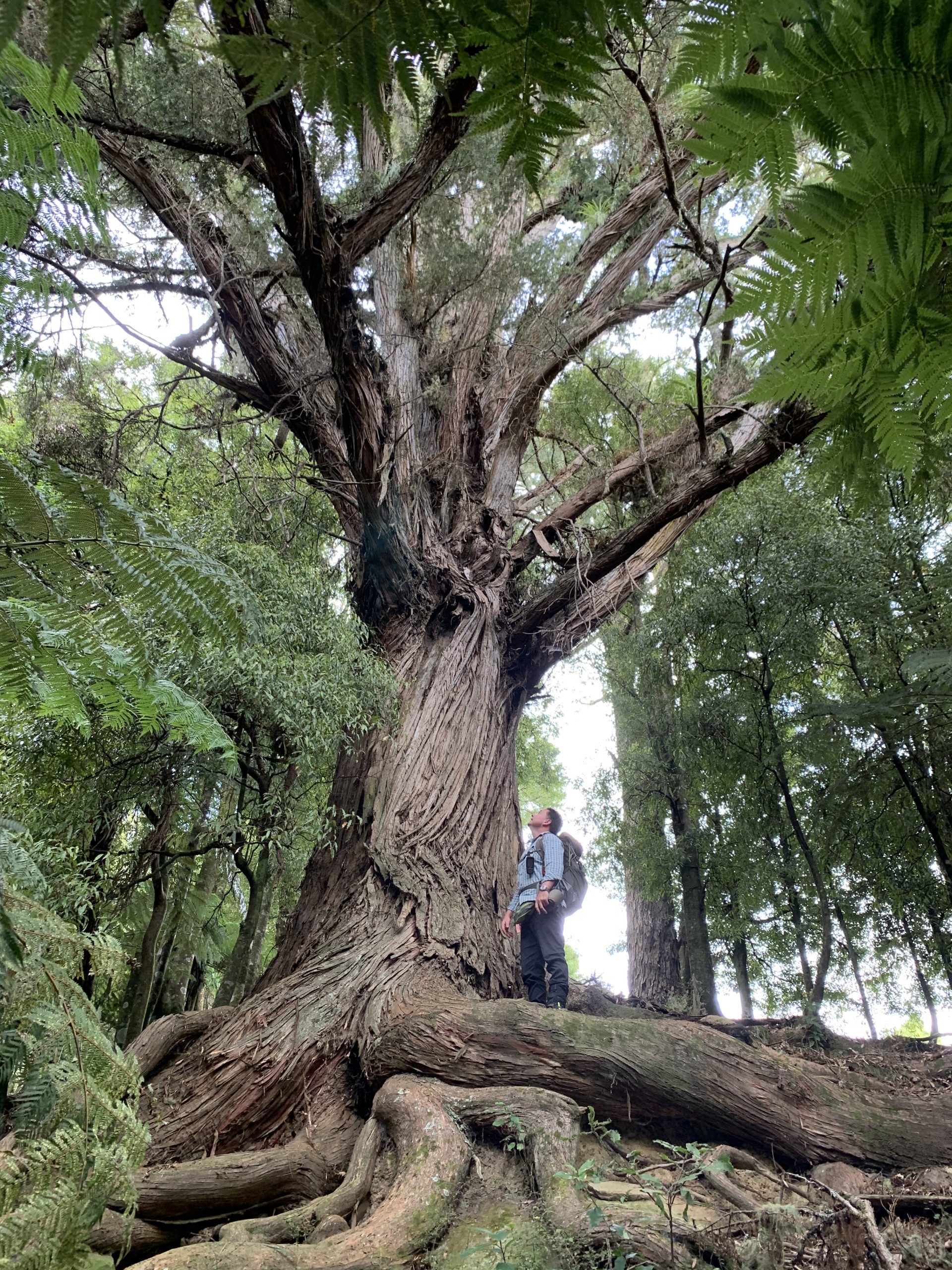 Establishing new native forests can be difficult, more so in some parts of New Zealand than others. Exposed, dry conditions without overhead shade favour more aggressive weed species which outcompete native species; browsing pests are attracted to environments where native species could otherwise regenerate. There is increasing interest in how New Zealand’s exotic plantations can be transitioned to native forests, and more is being learnt about management techniques that can be applied to provide the right conditions for native species to survive and thrive under plantation canopies.

The role of a nurse in forest restoration

In today’s times, given our long-standing biodiversity and emerging climate crises, re-establishing native forest at landscape scales must be amongst our most important environmental priorities. However, in the absence of a forest canopy, native forest restoration can be extremely challenging. A lack of shelter and shade results in drier, brightly lit conditions, which favour weeds at the expense of the more particular shade-requiring temperate rainforest tree species, the latter which naturally establish in the shelter of a native canopy some decades following disturbance.

The concept of a nurse is well founded in the restoration literature. Examples can be found across the globe of a nursery being created by pioneering species of either native or exotic identities. The concept is, that irrespective of its identity, a canopy ameliorates the macroclimate to form an understorey microclimate (i.e., which can be described by parameters relating to light, temperature, moisture, and air flow), thereby creating conditions more suitable for species naturally found beneath forest cover. 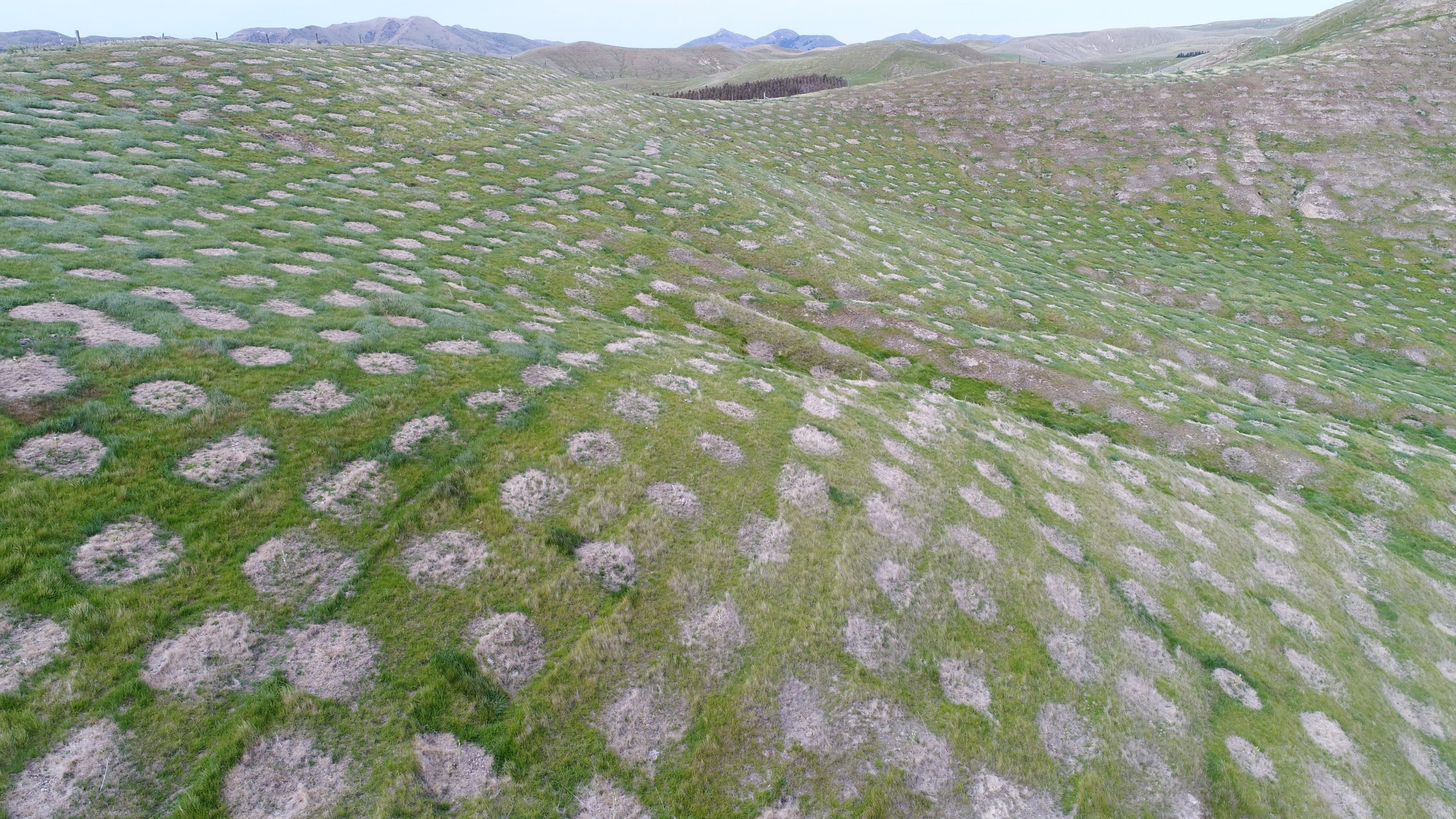 By land area, Aotearoa has a large (1.66 million hectares) exotic plantation estate and there are signs of a growing appetite amongst landowners for restoration of native forest cover. A number of plantation owners (including those that inherit plantations such as Iwi through Treaty settlements) no longer wish to continue rotational forestry. For others, due to stricter environmental expectations and compliance limits, and/or shifting commercial drivers, clear-fell harvest may be inappropriate or uneconomic. There is also a collection of landowners wishing to establish native forest in climates (e.g., dry, warm or windy) where the shelter of a nurse is crucial for establishing natives. Others have interests in sequestering atmospheric carbon through a hybrid exotic-native permanent forestry model which benefits from the rapid sequestration of an exotic plantation followed by a long-term accrual of carbon through the regeneration and succession of long-lived native tree species.

When managed under a permanent forest regime, the opportunity presented by exotic plantations as a nurse for native forest restoration is significant for Aotearoa and is deserving of greater levels of investigation and support. This would help make the concept a more certain proposition for foresters and forest regulators alike.

There is so much to be gained, but only if we are realistic and do it right

Where plantations can be retired at scale, much needed landscape scale outcomes for biodiversity are possible. Due to avoided clear-fell harvest, large scale protection of soils and freshwater ecosystems become possible. Carbon can be stored rapidly through prolific exotic tree growth and incorporated into a developing native forest.

But none of this is certain without adequate forest management. Transitioning plantations requires an ecological basis to forest management, which is in contrast to our tried-and-true exotic forestry techniques of establishing, tending and harvesting exotic tree stands. Permanent forest management, to be truly permanent, must address threats to regeneration and succession. As outlined below, such forest management needs to be implemented both at forest stand and landscape scales.

The vigour of native regeneration is spatially variable across Aotearoa, for instance, being more prolific at warmer and wetter compared to cooler and drier sites. Native species regeneration within exotic plantations is shaped by climatic constraints, meaning realistically, that recruitment of native species in plantations will require greater levels of intervention in less favourable climates. This leaves a subset of our exotic plantation estate suitable for potential use as a nurse for permanent native forest.

Another key consideration in today’s landscapes is the level of browser pressure (e.g., from feral ungulates such as deer and goats, and possums) on understorey regeneration and how successfully the damage by browsers can be reduced to enable diverse regeneration and succession. 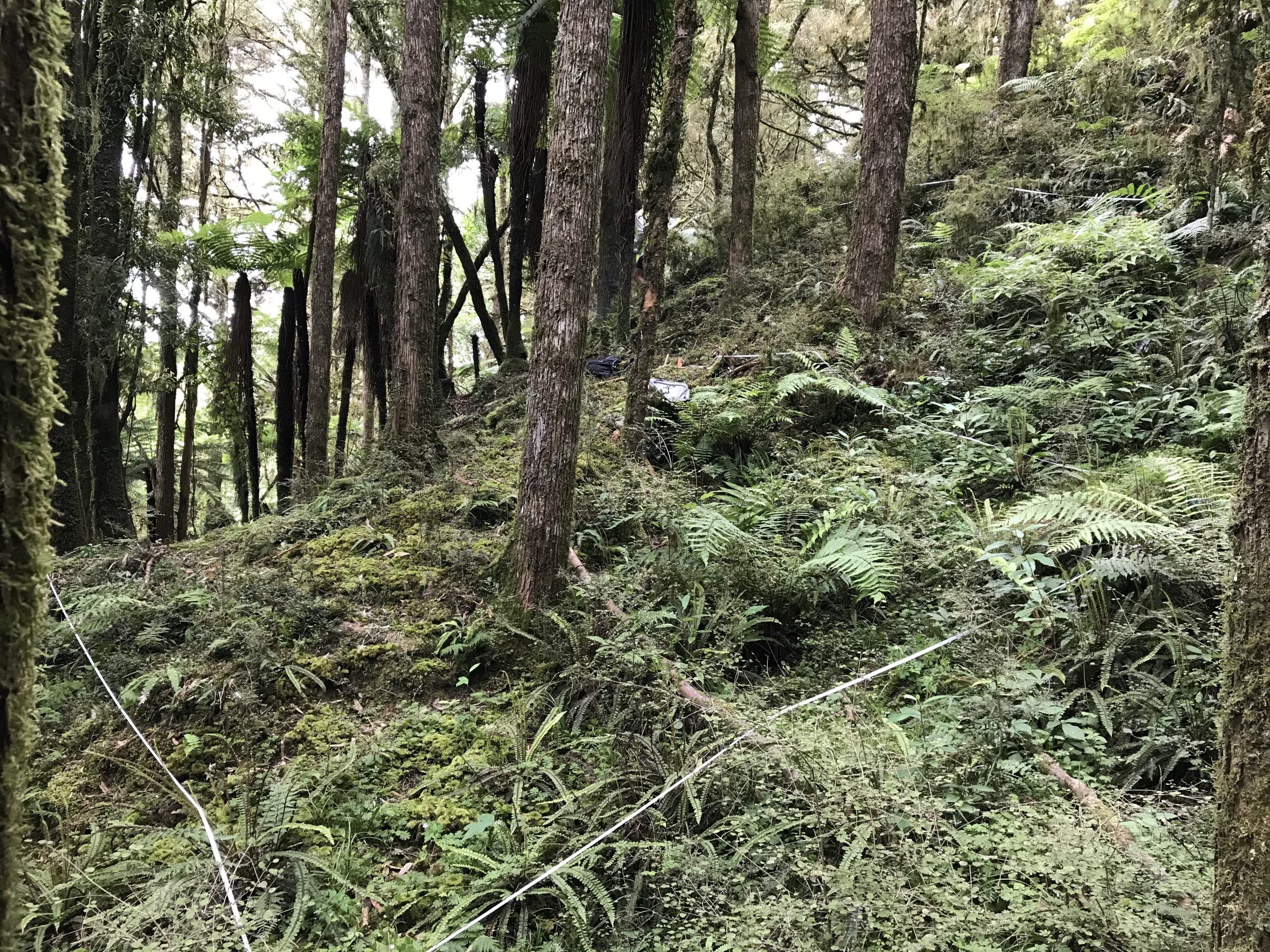 Existing forestry models require little browser control compared to the levels needed for spontaneous regeneration of a diversity of our native forest species. This means that credible permanent forest models involving native regeneration will in most areas require significant investment in sustained browser control, whether it be through quality fencing or browser population control. In some localities other pests that threaten regeneration and succession, such as invasive vines or shade tolerant weeds, will also require comprehensive control which the forestry operation will need to address.

Another reality which is central to a successful transition to native forest is the ability of native tree species to establish themselves in plantations, particularly the old-growth species which have desirable traits in terms of forming diverse, independent and long-lived native forests. Where seed sources or dispersers are scarce, these old-growth species might need to be reintroduced to plantations in some way and this action of subsidising dispersal limitation through enrichment planting is an important part of managing the transition. 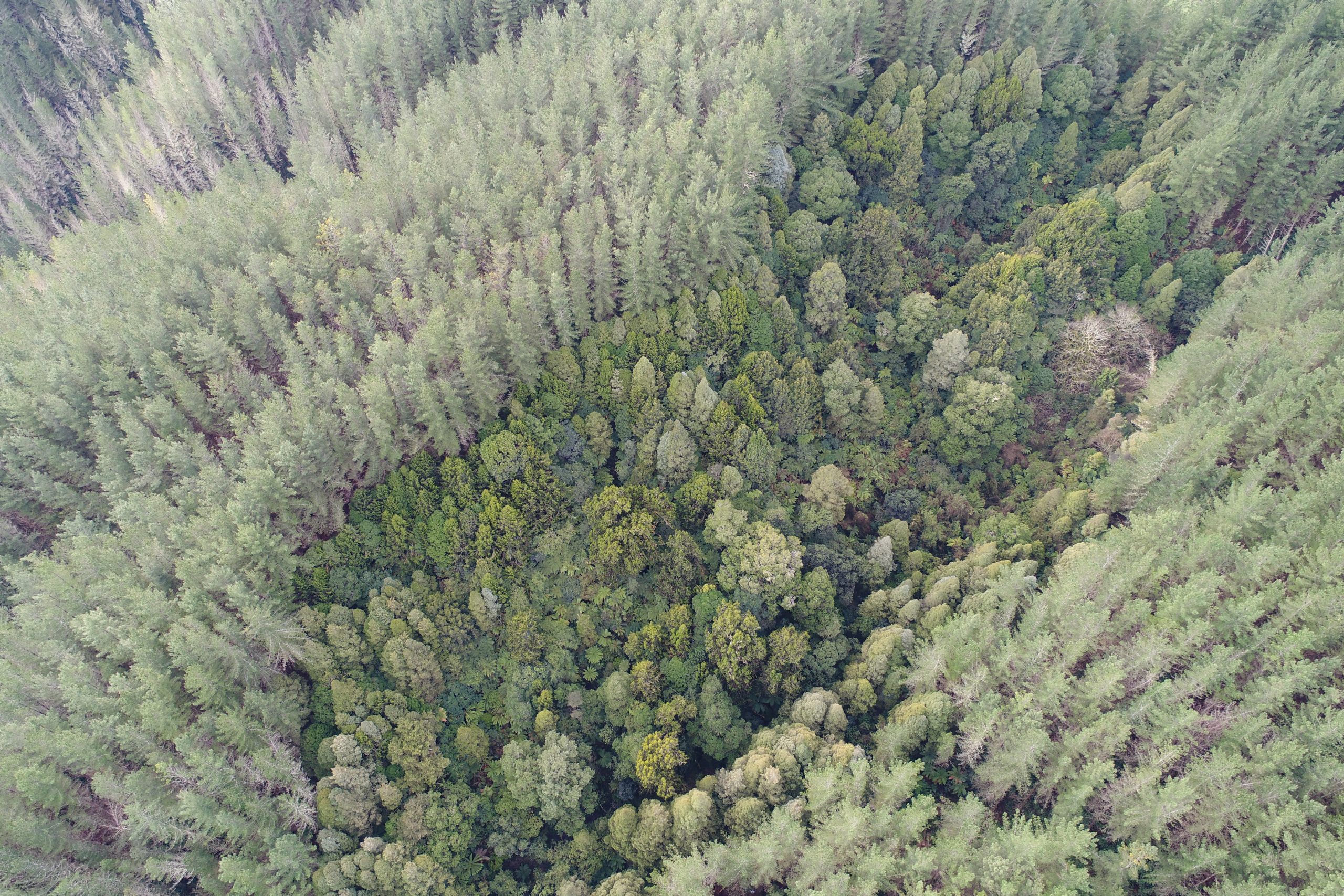 While the opportunities are considerable, management of a transition must be designed around a given site’s ability to regenerate and have adequate measures in place to address the risks to regeneration of native tree species. We should be critical of proposals where transitions to native forest are being sold without the fundamental management being put in place to ensure adequate native regeneration and succession will occur.

A number of existing examples of exotic plantation to native transitions serve as examples from which we can learn. 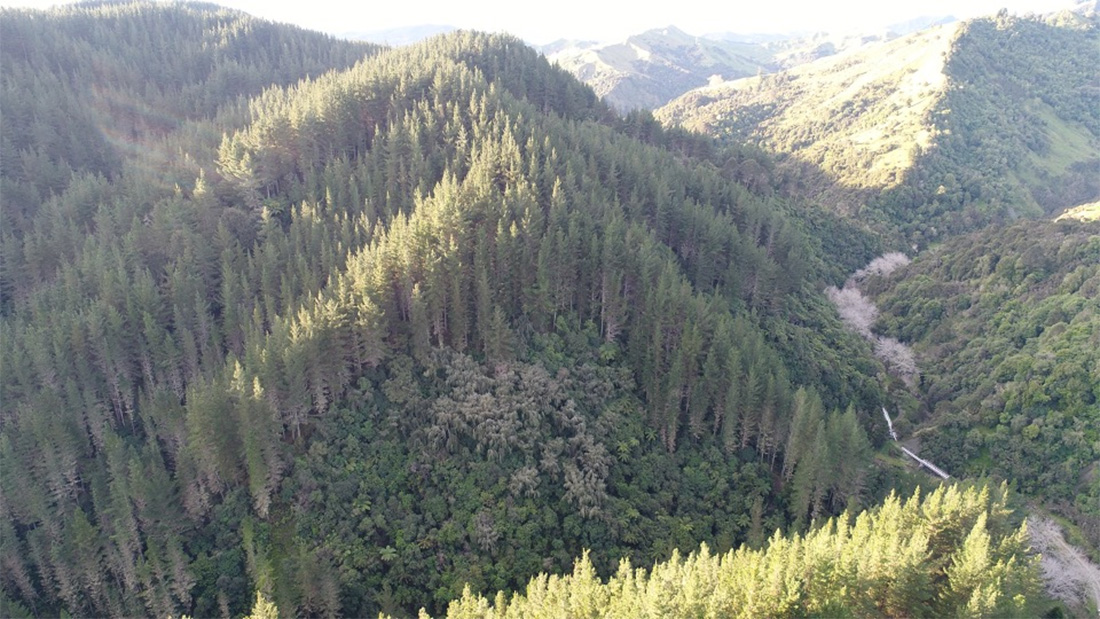 Clear-felled erodible hill country in regions like Tairāwhiti have been shown on multiple occasions to be highly vulnerable to severe erosion during extreme weather events such as ex-tropical cyclones. However, in this region, several examples exist where the freshwater values in such catchments have driven radiata pine plantations to be retained permanently, with management of feral ungulates increased to promote native understory regeneration. 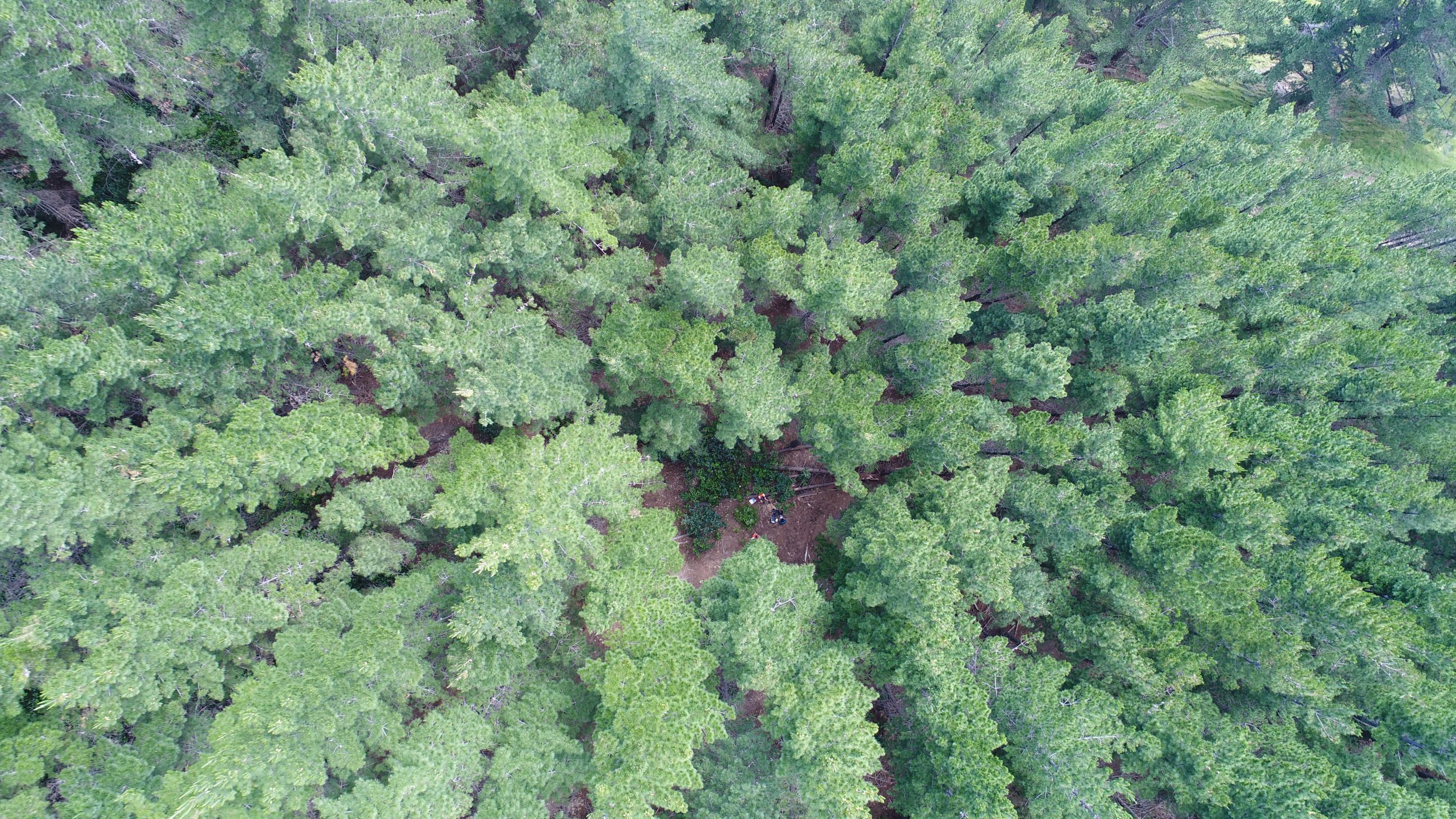 To accelerate transitions in these stands, managers can assess the need to manipulate the pine canopy , thereby optimising light levels to stimulate growth of shade-tolerant native tree species adapted to the environments found in tall-stature native forest 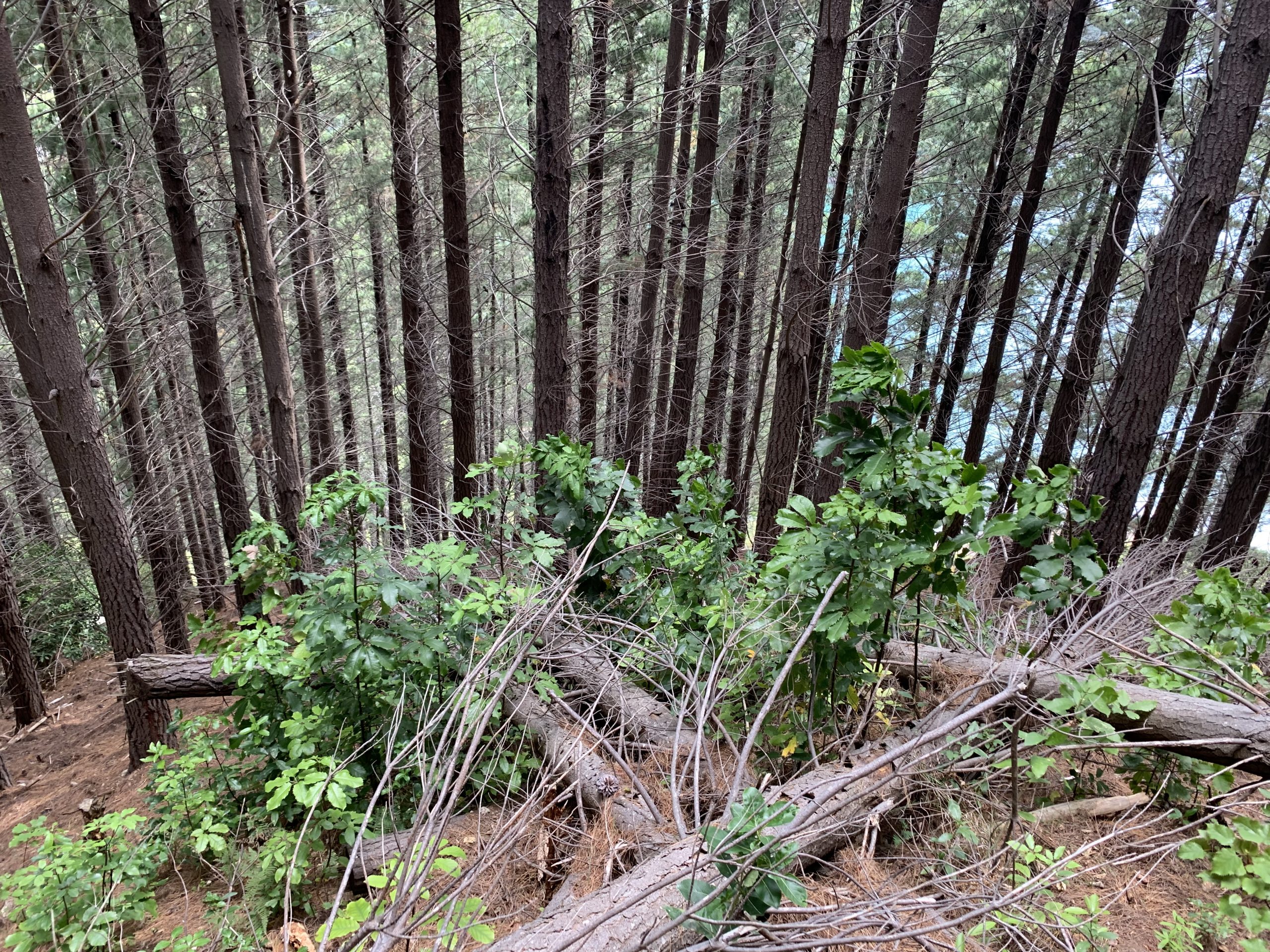 Stands of native conifers have been successfully raised in exotic conifer stands in the central North Island , with the native tree species rimu attaining dominance over the pine nurse within 50 years. 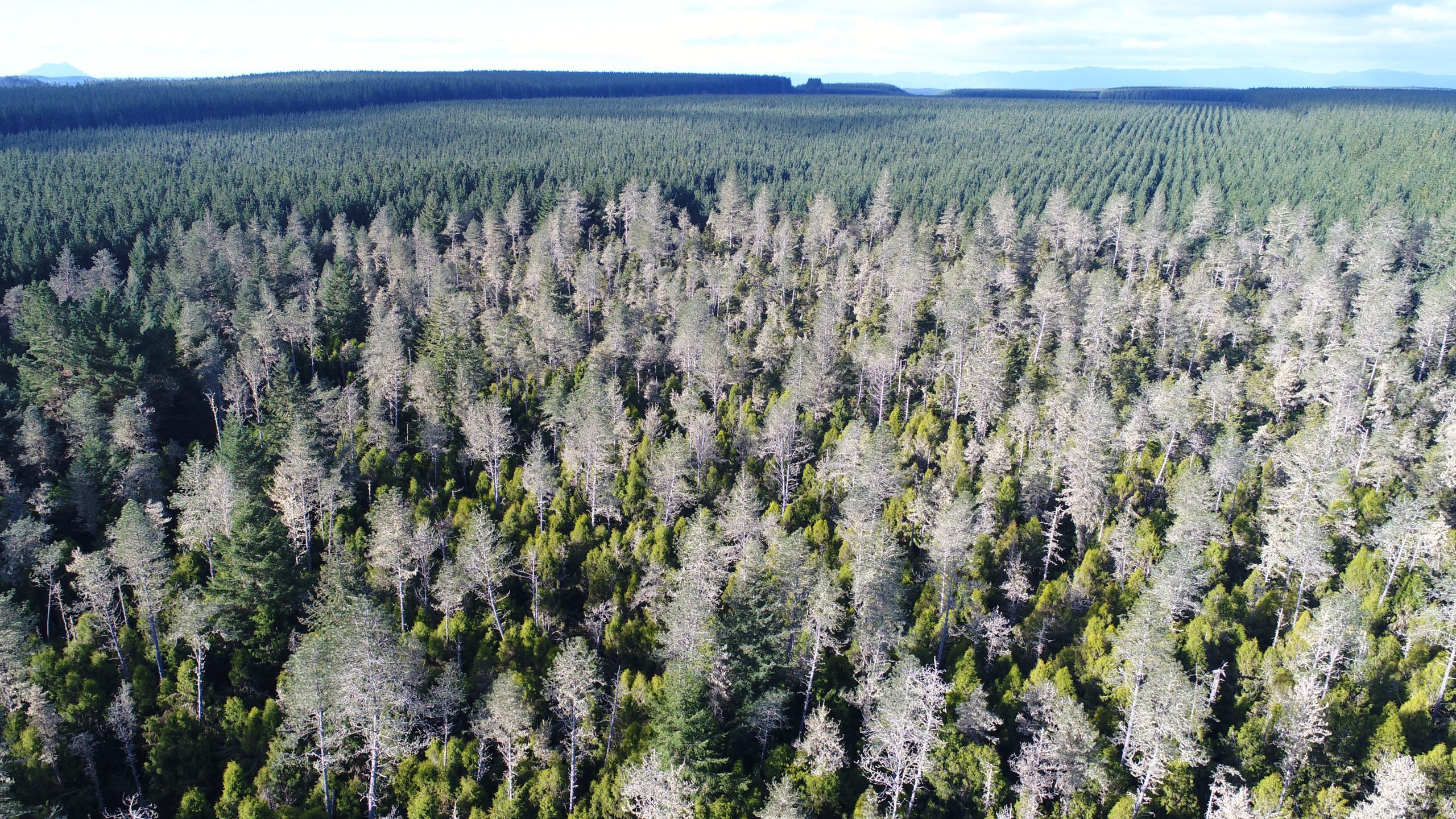 While atypical due to its localised high rainfall pattern, Milnthorpe Reserve in Golden Bay is well known for its abundance of naturally established native understorey beneath planted exotic tree species. 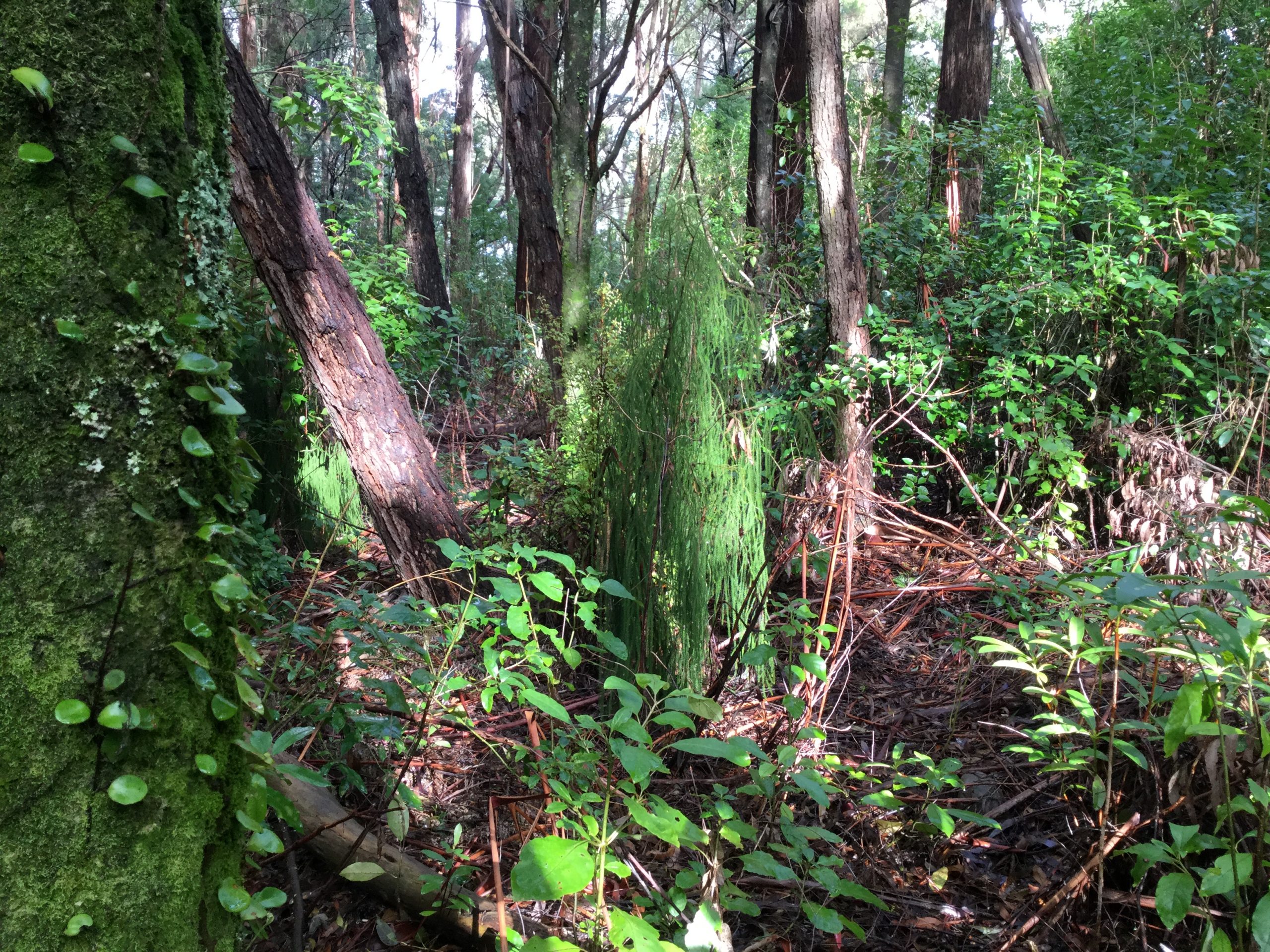 The shelter of an exotic nurse plantation comprising tree lucerne is being trialled as a tool for establishing locally adapted long-lived native tree species in a semi-arid zone of the Marlborough district. 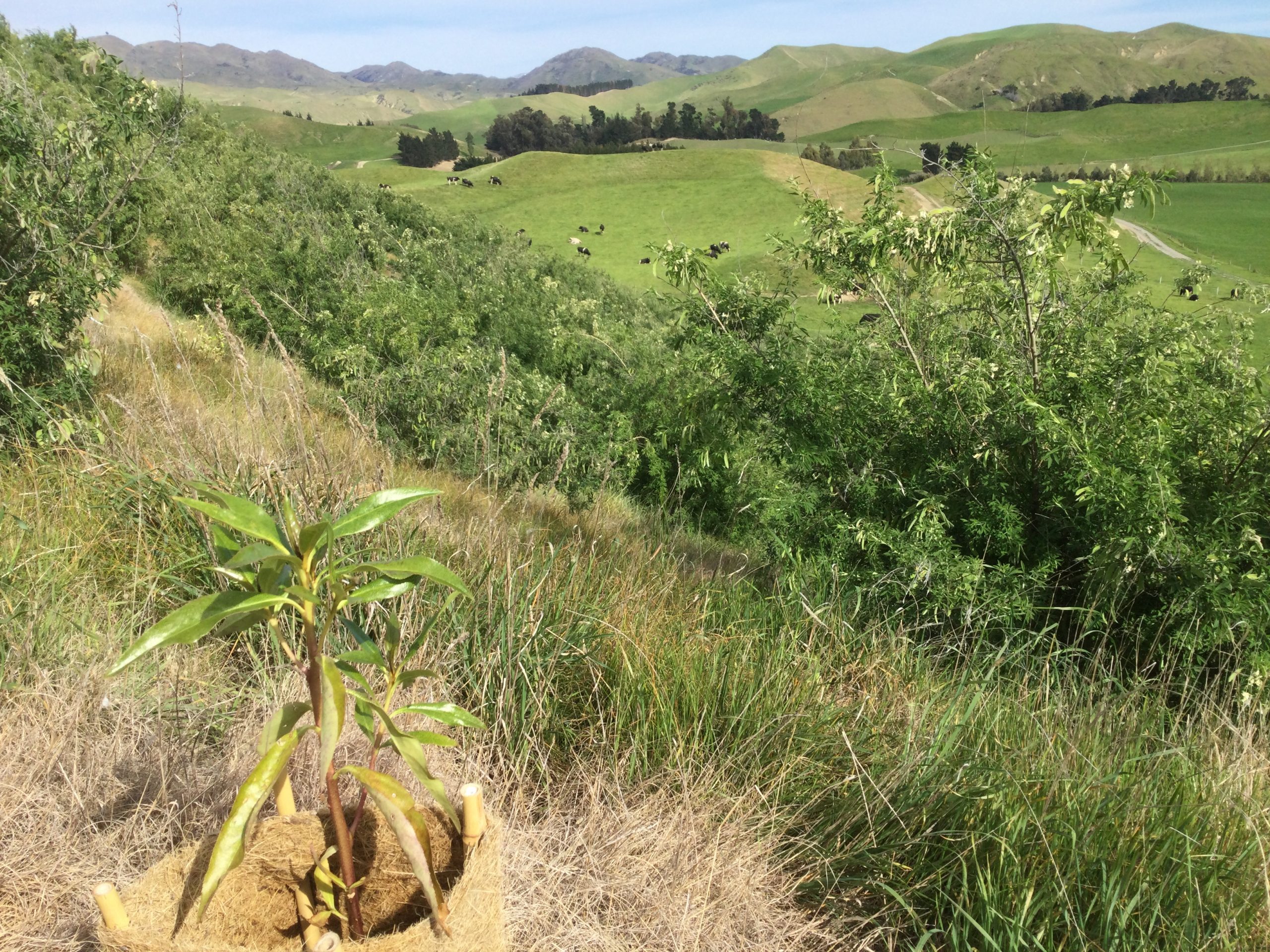 Much work is required to refine our knowledge of managing plantations for transition to native forest. There is a need for management scale trials where the techniques, costs and benefits of transitioning can be empirically assessed. Work needs to be done to delineate the land area of Aotearoa according to suitability for the transitioning approach. Identifying areas requiring low levels of intervention will help as it is in these areas that forest restoration can be implemented at landscape scales through retiring and transitioning exotic plantations.

Given exotic plantations are forest types with no natural analogue for study, we also need to collect data which demonstrate the growth and biomass of native tree species within exotic plantations. Further still, work is required to define and describe forestry techniques required to effect the transition at various scales and to meet differing objectives. Importantly, these forest transitions need to be planned and implemented through an ecological lens to increase certainty and so that opportunities and threats can be fully realised and addressed.

With the adequate knowledge, and a realistic approach, we have significant opportunities for native forest restoration where exotic plantations can be transitioned to permanent native forest.