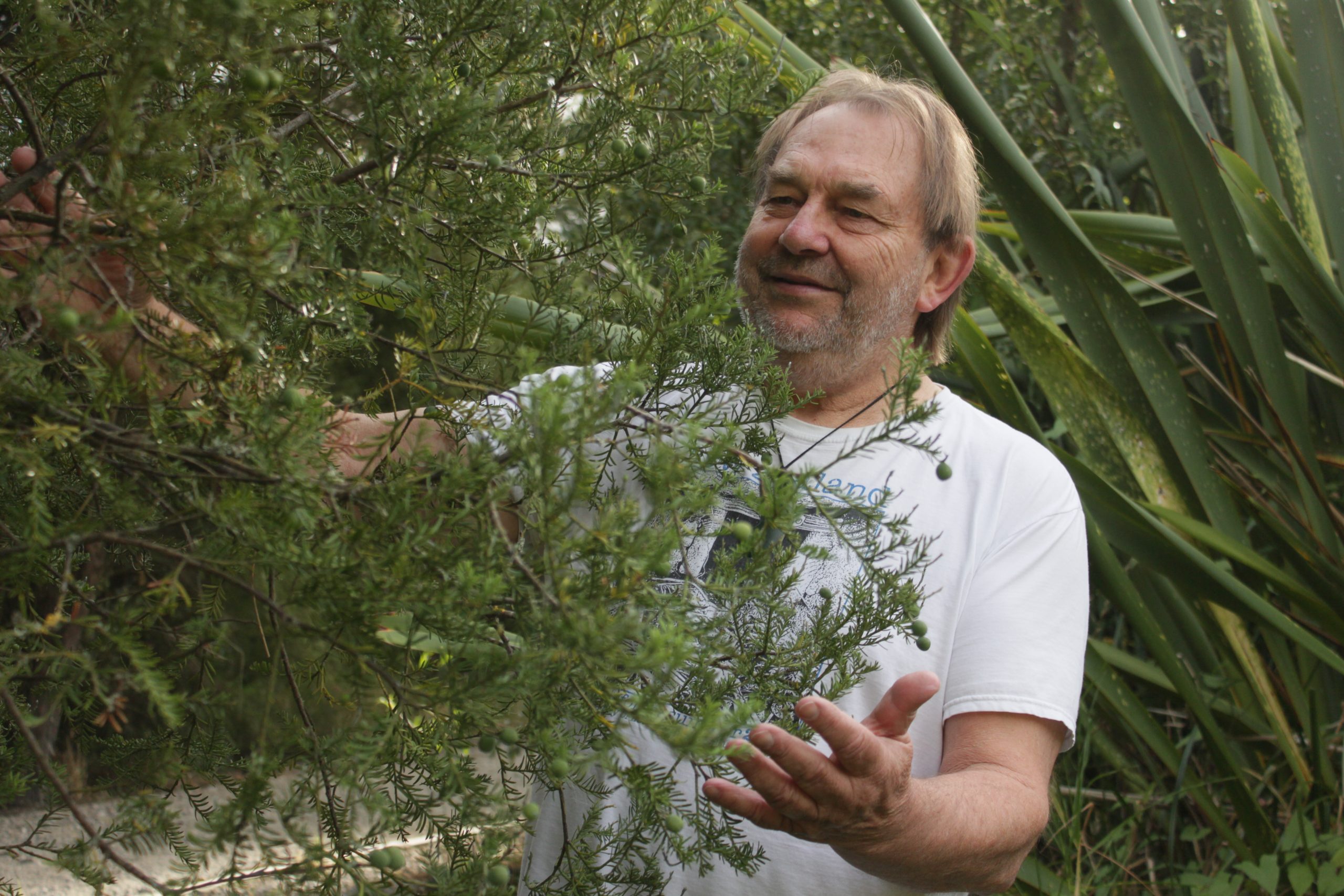 The forest cover of Ōtautahi-Christchurch City has been evolving for some 6000 years. Here Colin Meurk tracks relatively recent changes since settlers arrived, and presents an optimistic picture of native species making a comeback in and around the ‘Garden City’.

Ōtautahi-Christchurch City is young, but the place has a long, convoluted history since emerging from the post-glacial ocean 6000 years ago. The urban forest we now behold is an evolving, living cloak, waxing, waning and ever unfolding, revealing many layers.

Before the first peoples stepped ashore from their waka, there was forest across the Plains and over much of what is now the City. This is captured in the Cathedral Square Chalice sculpture – fretted silhouettes of foliage and flowers of the buried forest lying beneath the earthquake-munted Cathedral. These ancient forests were engulfed in silt, sand and stones, carried by a raging Waimakariri River. Then later, a thousand years ago, human-induced fires visited the woods and shrublands across the wider Plains, and finally the British settlers’ farms arrested nature’s slow recovery back to a dry forested landscape it wanted to be.

The celebrated Black Maps (1856) of the first English surveyors pretty much agree with modern soil maps on the location and relative proportions of original wetlands (about a third of the modern city) and drylands. Fundamentally there were ferns on organic peatlands that supported sedge reeds and tussocks, mikimiki and mānuka. There were swamps of raupō, tall tussock sedges, fern, harakeke, and tī kōuka on gleyed soils (grey, steely colour of deoxygenated iron compounds of continuously water-logged silt).

In the fullness of time these flax and fern-lands on river/stream floodplains were succeeded by mānuka, tī kōuka, karamu and kahikatea-pōkākā forest. When the British migrated in from the late 1840s there were only two remnants of forest that had survived flood and fire. These were 600-year old ‘islands’ or motu of kahikatea, mātai and tōtara at Pūtaringamotu and the similar ‘big bush’ at Papanui. These two forests are or were on Taitapu gleyed soils typical of floodplains, with tōtara and mātai more prevalent on the drier fringe with more oxidised Kaiapoi soils of a rusty iron hue. The latter two podocarps (Gondwana conifers) were prime, durable timber for the early building and fencing of Christchurch, and all the millable trees of these species were gone in short order.

It is nevertheless a modern-day miracle that Riccarton Bush was preserved by the Deans family, because the land was still prime for farming, and in fact kahikatea (or white pine as it was known because of the lack of goldy resin in the wood) proved perfect for making butter boxes – that wouldn’t taint the butter. One imagines that the wet to dry soil sequence – Taitapu gley, Kaiapoi mottled, and Waimakariri dry soils naturally and potentially supported forests dominated respectively by kahikatea/pōkākā; mātai/hīnau-houhere-tarata; and tōtara/houhere-kōwhai-kānuka. These podocarps, unlike northern needle conifers, have berries upon which our bush birds are dependent.

From the beginning Europe’s so-called noble trees – oak, elm, ash, linden, beech, sycamore, plane tree horse chestnut, cedar, as well as swamp cypress and redwood from North America, were being planted for nostalgia and their known value as timber or amenity. Pinus radiata from North America, eucalypts from Australia and willows from Europe were also being planted for rapid transformation of what, to the new settlers, appeared a somewhat desolate, swampy early Christchurch scene.

We look at the well-wooded city today and don’t remember it was ever different. But from a classic tree growth curve, we can imagine the now mature northern deciduous trees might have been 10 metres tall by end of 19th Century, 25 metres by middle of 20th Century and up to 35 metres now, tailing off and beginning to fall apart,  having lived too fast in this oceanic climate. During this time, tree cover in Ōtautahi has increased from less than 1% to 7-29% today, depending on suburb or inclusion of plantations. The average is 12% when plantations are excluded, whereas parks and reserves are 29% tree covered.

Adoption of the Garden City brand led to the populating of parks and residences with globally fashionable trees and shrubs – camellia, maples, rhododendron, plums, holly, fatsia, hawthorn, barberry, yew, laurels, birch, robinia, wattles, alder, privet, ash – almost all of which (except the first three in the list) have become invasive, along with grey willow, tree of heaven, rowan, elderberry, blackberry, and exotic vines.

Adding to the recombinant mix there were always a few indigenous trees actively planted – fast-growing or distinctive tī kōuka (fancied as an ‘exotic palm’), lancewoods, pittosporums, and akiraho. This inclination has expanded due to the post-war rise in environmental awareness, local identity and native plant nurseries. The proportion of indigenous trees has at the same time been spontaneously increasing through natural regeneration – first the common, tī kōuka, karamu, kōhūhū, tarata, pōhuehue, poroporo, broadleaf, akeake, five-finger, and horoeka; and introduced from the North and proliferating, or forming hybrid swarms with local varieties – taupata, karo, houpara, houhere, and kōwhai.

Because of more relaxed management, locally rare seedlings of māhoe, kaikōmako, tītoki, a lone tawa from a century-old, planted tree (south of its natural limit in Kaikōura), and whekī (a single observation on riverbank opposite historic plantings in Millbrook Reserve), are now also emerging.

Not being a rainforest, Ōtautahi has always been marginal for frost- and drought-tender species apart from in very localised niches where there is continual moisture, yet not wet feet. Tree ferns, filmy ferns, epiphytes, makomako and kōtukutuku fall into this category. A case at Lincoln illustrates this. In one particular season the perfect goldilocks conditions prevailed – there were blackbird-dispersed kōnini fruits, from a planted parent tree, and germination along the sheltered, south wall of a building in an existing woodland. The seedlings capitalised on a cooler, rainier summer than usual, and became established as saplings. This happened only once, but tānekaha and mountain beech have also occasionally regenerated out of their range at this site. 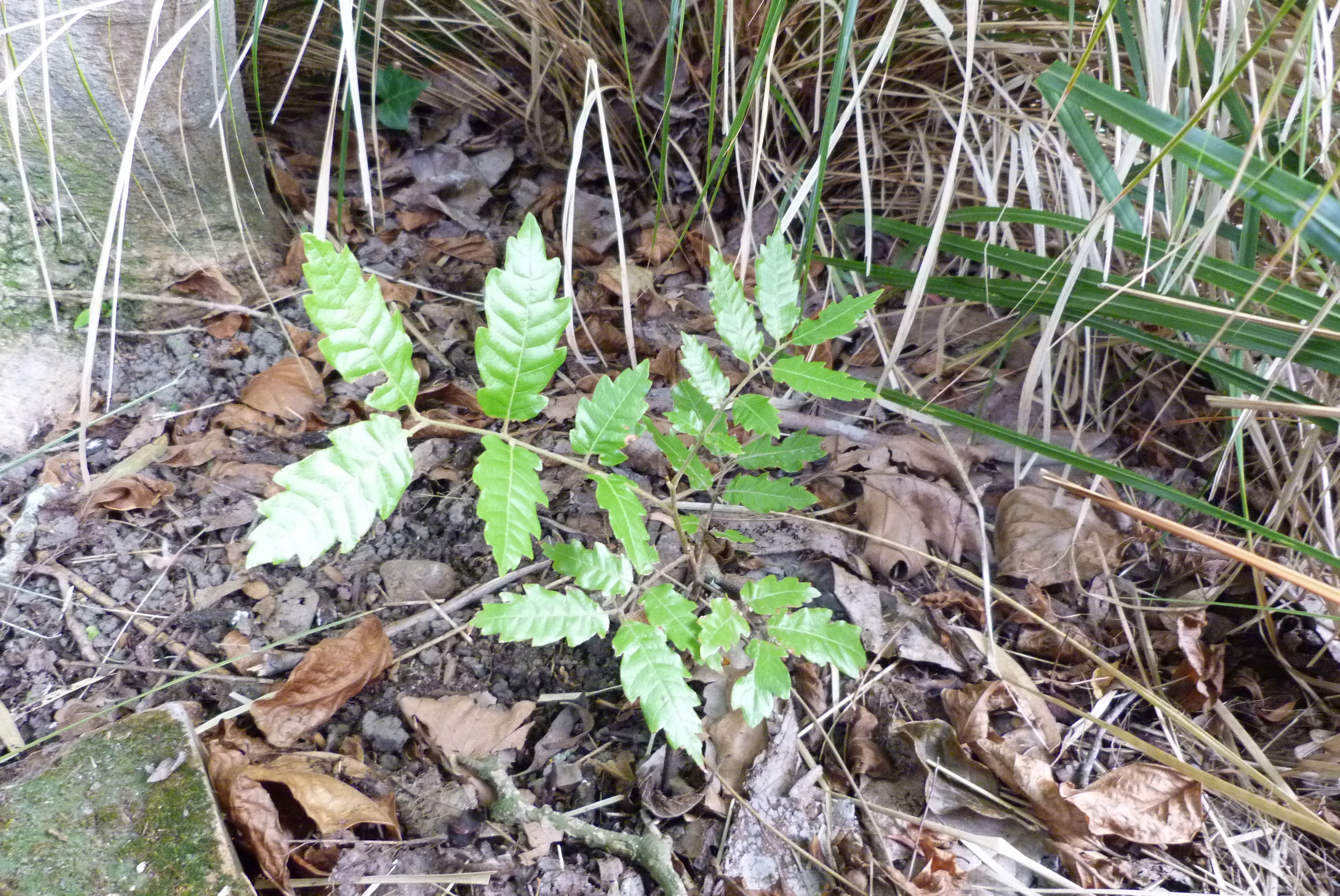 Tītoki at its natural southern limit on Banks Peninsula has appeared in my garden under magnolia and gum trees – suppressed but it slowly will take over from the exotic perches (Fig. 1). In the past three decades, a lone tītoki in Putaringamotu has spawned saplings spread throughout the bush.  It is tempting to suggest this has something to do with climate change. Riccarton Bush species (kahikatea, makomako, karamu, putaputawētā, tī kōuka, Coprosma rotundifolia, rōhutu, māhoe) have been found up to 1.4 km away from source in residential gardens but through being unrecognised or inconveniently located are usually eliminated. Ernle Clarke Reserve, a 100-year-old English woodland, has small groves of kahikatea and other native trees. Frequent kahikatea seedlings occur close to parents, but also up to 200 metres from source. Māhoe, a still rare species across Christchurch, is densely established in the understorey since the style of ‘gardening’ of the formerly privately owned woodland has changed – from ‘scorched earth’ to selective weeding.

Rain-forest rimu and native beech do not belong in the local dry climate but there are more rimu in Christchurch than local podocarps, and similarly beech perhaps because they mimic the European noble trees. One imagines that whenever city residents go on holiday across the mountains to the rainforests of the West Coast and see the beautiful young seedlings of rimu – and sensing some need for ongoing native bush bathing – dutifully bring them back to plant in their gardens. Sadly though, they never fruit in eastern Canterbury, let alone give birth to any little rimu progeny. Several other forest types do however naturally occur in greater, peri-urban Christchurch – Montane cedar, beech, and mountain tōtara; dry tōtara-mātai-kānuka woodland; riparian and coastal ngaio-akeake bush. The predominantly deciduous parklands, street trees, orchards, gardens, and pine plantations make up the total gamut of urban forest.

Kānuka was the prevalent plains tree cover in the 1850s, seeds prolifically, is wind-dispersed and, while it grows as a suppressed turf in a mid-Canterbury asphalt country road, near a remnant stand, inexplicably it is hardly ever seen regenerating in suitable urban habitats like paths and wall cracks.

Community restoration, of habitat and people, has been adding critical mass and mother nodes of hitherto uncommon source plants (especially the long-lost native noble trees) across the city since the sesquicentennial year of 1990. Prior to this, Arbour Day plantings up in Victoria Park became a post-war thing, led by Forest and Bird. The Christchurch City Council waterway enhancement programme was also an important boost from the mid-1990s. These efforts, along with Te Ara Kākāriki in Selwyn District, have been steadily advancing an optimised forest patch model across the near-city landscape, connected by corridors of naturalised streams and roadsides. And a more naturally receptive urban matrix is being enriched with local forest species, planted and spontaneous, provided they escape the over-zealous gardener. I have described the rampant regeneration of the common forest elements, but a transformational point has been reached in the past five years as less common noble trees have matured to not only fruit but procreate young seedlings more widely across the residential matrix as hoped for.

This regenerative forest life force or mauri of the city is arcing back to some distinctively primeval, Ōtautahi-Aotearoa character. It is increasingly embraced and promoted by the community and mana whenua, and will support iconic wildlife – especially when value is added through predator-proofed sanctuaries, and perhaps, with some of the species which have arrived from northern parts of the country, will be resilient to climate change. 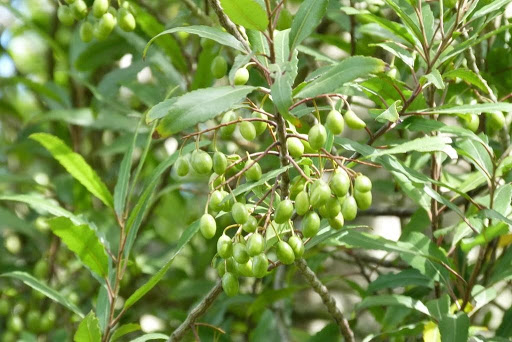