The Importance of Native Trees in Agroecosystems

Early settlers who arrived on land cleared of native forests soon began planting exotic tree species for multiple benefits. These exotics continue to dominate tree cover on farms today. Native species offer the same benefits: the challenge is how to encourage farmers to actively manage and expand native forest remnants, and establish new native forests. Policy settings need to change and other incentives need to be provided if native trees are to become the dominant tree cover on farms in future.

New Zealand was primarily forested before people arrived, at least over the areas that are now used for farming. Estimates vary, but forest and other woody vegetation (woodland and shrubland) likely covered 75-85% of the total New Zealand land area. With settlement by Polynesian people some 7-800 years ago and then by European people in the last 150-200 years, we have seen a massive loss of native forests with perhaps only 25% of the land area still forested.

Early European settlers encountered or created a largely treeless landscape and quickly realised the importance of trees to farming. So on the one-hand, while native forest was cleared to create pasturage, trees were also being planted to provide the many benefits that they give. The irony though is that these planted trees were largely exotic, mainly trees that were familiar to the settlers from their homes in England and Australia. 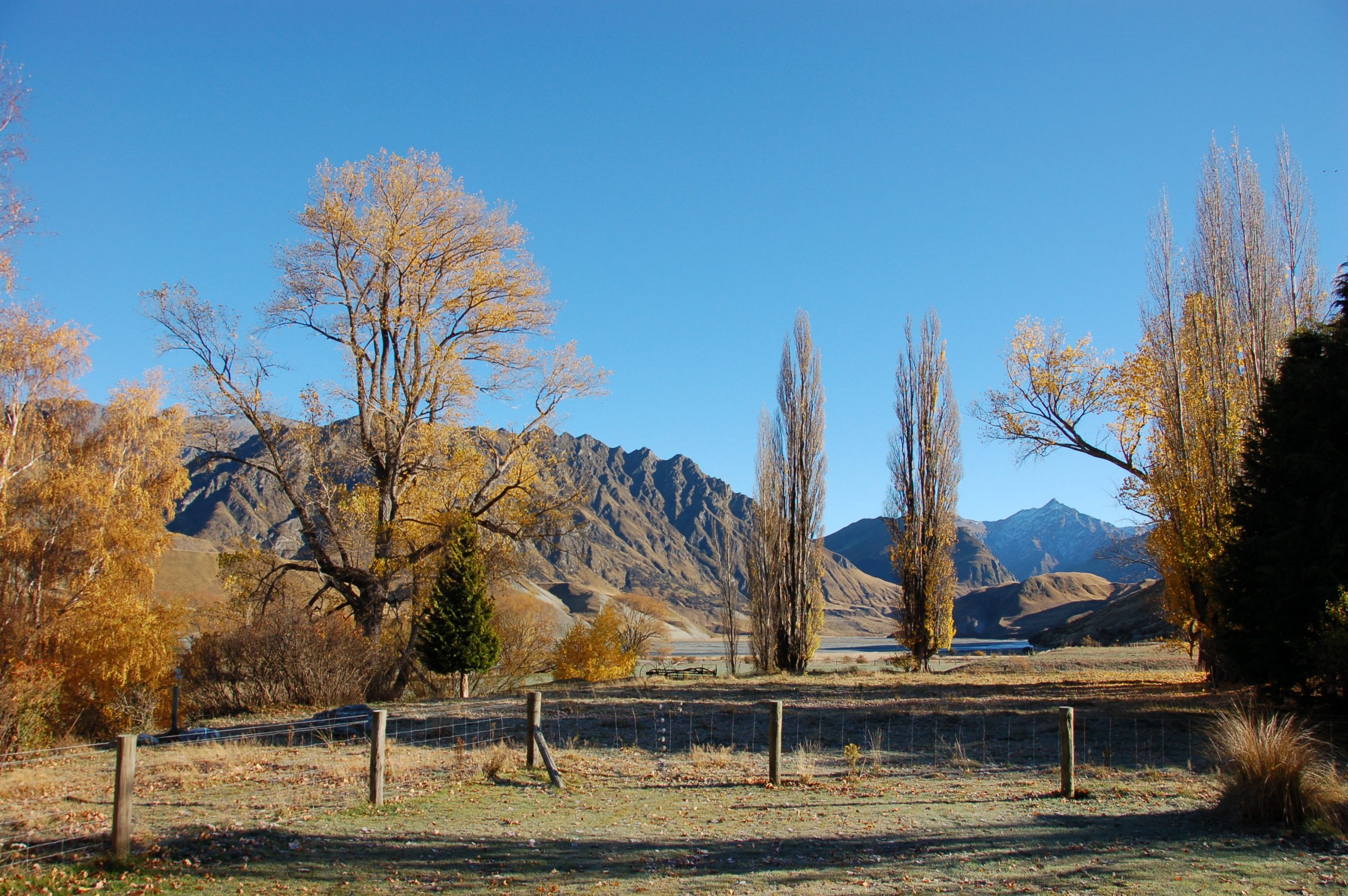 Exotic trees were planted both because they were familiar (for the same reason that exotic birds were being released in New Zealand at this time), but also because they provided many benefits to farming including timber for building, as a source of firewood, and especially for shelter. More recently we have come to recognise the many other benefits that trees provide in agroecosystems including for erosion control and enhancing water quality, for shade, as an additional income source and for carbon sequestration. Most recently the benefits of some exotic trees for native biodiversity have also been realised, for example eucalypts providing nectar for korimako and willows, spring foliage for kereru.

Today in New Zealand exotic trees are a dominant component of agroecosystems whether they are long shelterbelts of pine, macrocarpa and poplar, woodlots of various timber species, large spreading eucalypts providing shade around stock-yards, willows along creeks, homestead gardens of walnuts and fruit trees, and so many more.

While exotic trees are such a conspicuous element of modern agroecosystems, in the rest of this essay I will look at the role of native trees and consider what remains today, what native trees can offer farmers and what the challenges are to establishing more native trees in rural landscapes.

A joint University of Canterbury – AUT research programme has been focusing on native biodiversity in agroecosystems. As part of this research, we  recently published a nation-wide study showing that while most of the country’s remaining native forest occurred on public conservation land (national parks, scenic reserves etc), significant amounts also occurred on private land, especially on sheep and beef farms which contain 17% of all remaining native forest. While this native forest is often highly fragmented, it contains forest types that are otherwise under-represented on public conservation land. We concluded that New Zealand sheep and beef farms offered massive potential for biodiversity conservation, especially in those parts of New Zealand with the least public conservation land. 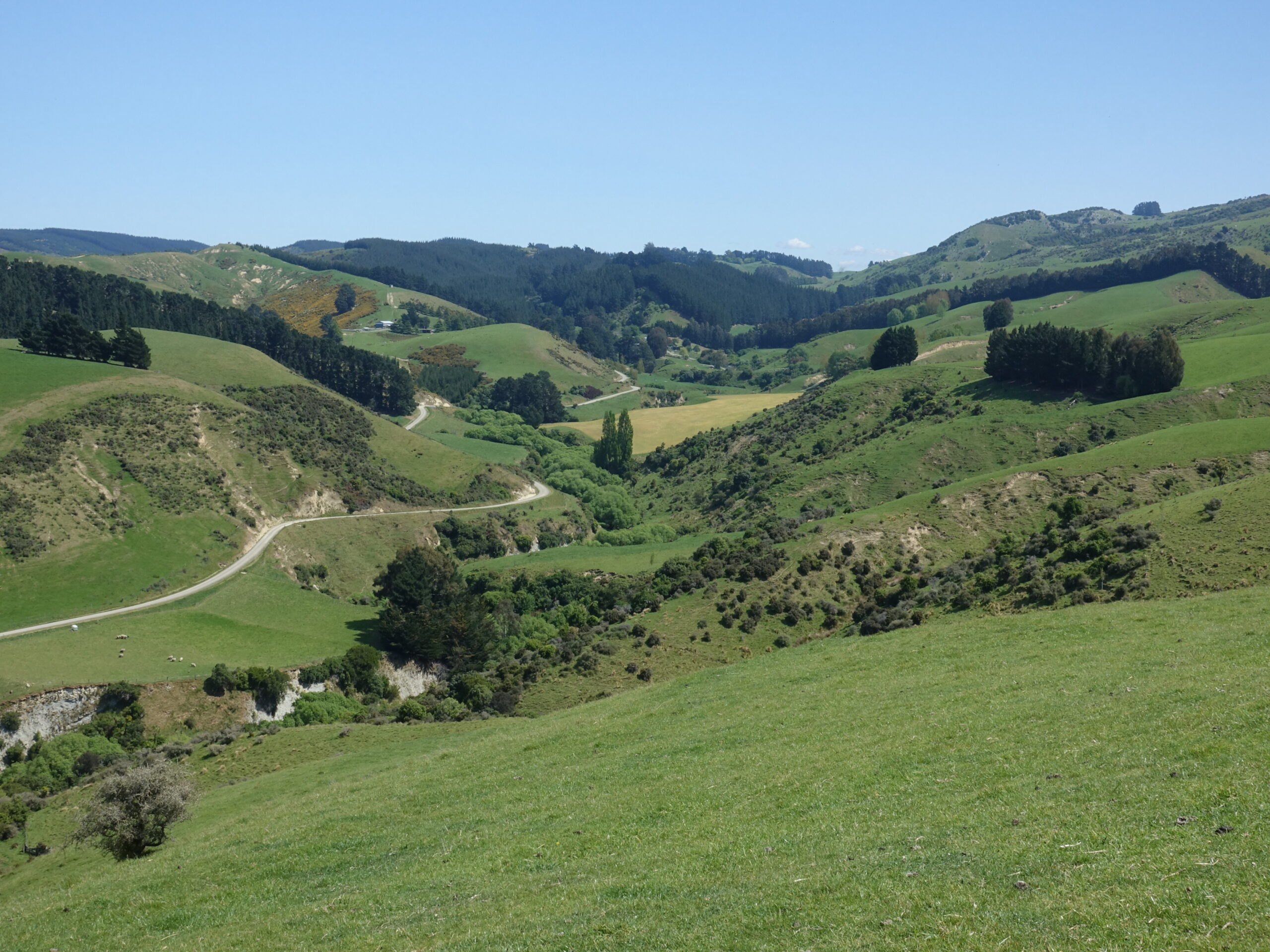 Native forest occurs in many forms on agroecosystems from remnant patches of the original forest to small copse and even scattered trees across paddocks, as well as often large areas of regenerating shrublands and forests, and increasingly areas of restoration plantings. Forest composition is variable depending on where you are in New Zealand, but regenerating forests are often different to remnant forests with species like kahikatea, tōtara, māhoe, kōhūhū, kānuka and mānuka abundant. Native trees in farmland can be found in a wide range of locations but are often most common along gullies or on south facing hill slopes, sites that have provided refuge from historic fires or are less productive from a farming perspective. But in many cases, even on some of our most productive farmland such as in the Waikato, individual trees and even forest remnants can be found scattered across paddocks.

Native trees can offer just the same benefits to farming as exotic trees, and some have comparable growth rates. Native trees on farmland can be important for timber, help reduce the impacts of soil erosion and improve water quality, and provide shade and shelter. But even more than this, native trees provide habitat for native biodiversity, improve landscape connectivity for forest birds, sequester carbon for the very long-term, and are a core part of our cultural and landscape identity. Native trees like kānuka and tōtara can be prolific regenerators even under grazing. In higher rainfall areas like Northland and East Cape, tōtara regenerates vigorously across low producing pastures and there are extensive areas of young regenerating tōtara forests in these landscapes.

It was heartening to see in the January 2021 Climate Change Commission report  a strong emphasis on establishing native forests for the long-term carbon sequestration over the use of short-lived pine plantations. But even more importantly, native forests (remnant, regenerating and planted) when considered and planned at a landscape scale can greatly improve connectivity within agroecosystems. This connectivity is essential to allow our native birds including kiwi to spread out across our rural landscapes.

Native trees offer so much in rural landscapes but there are challenges in both retaining what remains and in increasing the number and area of native trees. It is important that we not only retain what we already have but that we manage remaining native trees and forest to sustain and enhance their values. This involves controlling the many factors that threaten them such as invasive plants and animals and through providing buffering and increasing connectivity around and between remnants.

Establishing new native forest is about ecological restoration and involves understanding the ecological processes such as succession and mutualisms, and ensuring that appropriate species are established for the site conditions and that initiate successional development towards more mature forest. In some situations, enrichment of existing forest, especially regenerating forest such as kānuka, might also be an option.

But to both sustain and enhance native forest across rural landscapes the political settings need to be correct. At present we have a National Policy Statement on Indigenous Biodiversity that takes a very rules-based approach to protecting native biodiversity including forest across New Zealand. While we need consistent national rules, a strict rules-based system is likely to fail unless good incentive systems are in place that encourage and support farmers on whose land this current and potential native forest exists.

Simply saying an area of native forest is significant and cannot be developed does nothing to either protect its values or encourage a farmer to think about planting additional areas. Native forest requires management whether it is on public conservation land or private land which is why the Department of Conservation spends hundreds of millions of dollars each year managing biodiversity on public conservation land. New Zealand  urgently requires support for landowners to do the same on private land if we are to sustain the values that occur in native forests there. One simple tool that could be used to help with this is allowing farmers to gain some form of carbon-credit from native forest that was present before 1990 (and hence is not Emissions Trading Scheme eligible). This would be a positive incentive for farmers to manage degrading factors like plant and animal pests and would lead to an improvement in habitat quality and of course result in more carbon sequestration. While controversial in some ways, the One Billion Trees programme did contribute to an increase in native forest planting across New Zealand and this scheme needs to be urgently refunded to facilitate ongoing native forest establishment. Finally, landowners need to be provided with really good advice about the importance of their native forests, on how best to manage what remains, and the best ways to establish new native forests. We need biodiversity ambassadors throughout rural New Zealand to provide free, independent, expert advice to landowners.