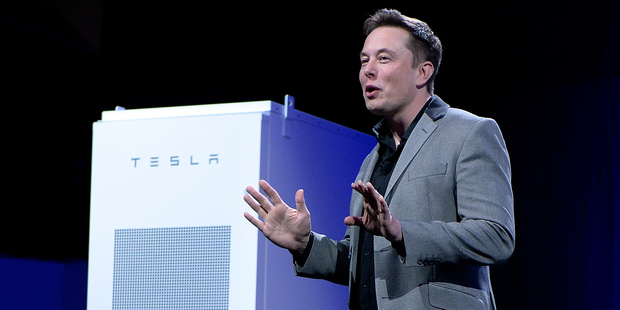 He said the battery – which can store large amounts of energy in a small space and at a relatively low cost – was the biggest technology advance he’s seen in his 30 years in the energy industry.

“Looking into the future it completely changes the way the energy sector has to think. It will change the way we design and build networks and generation,” Mackenzie said.

Tesla founder Elon Musk this month unveiled new lithium-ion batteries for home and commercial use. They start at US$3000 ($4058) for home use and the company is stepping up production at a $6.2 billion “gigafactory” in Nevada.

Electricity systems are designed around building power stations and transmission lines to cope with peak demand. This requires large capital spending from the companies which in the distribution sector are regulated and under pressure to keep charges down.

Vector has a commercial relationship with Tesla forged over the past year as a result of the Auckland-based utility company having a demonstrable interest in solar power and battery technology, Mackenzie said.

Vector would investigate providing large-scale battery storage for commercial users that could be on trucks or on skids to cope with peak demand that may vary between seasons. It was already offering solar units for residential consumers with close to 300 being hooked up to older style batteries.

The company has about 700,000 electricity and gas connections and last year spent $202 million on capital directed at growth. Total capital spending grew 13.6 per cent to $339.2 million.

Spending on new developments including alternate energy was about $10 million a year, Mackenzie said.

“We have to embrace this rather than hope it will go away.”

The biggest mistake would be overinvesting in traditional lines infrastructure that could be obsolete in a few years.

The larger domestic Tesla battery which sells for US$3500 could provide the equivalent of half a day’s power if storing solar energy, and if joined together could make a household self-sufficient. Mackenzie said it would provide some remote houses the opportunity to get off the grid but he expected most to stay connected for security of supply and to be able to sell back into the system.

He would not discuss more of the deal with Tesla. Details on availability of the batteries would be released about the middle of the year.

Tesla is best known as a car manufacturer but its vehicles are not likely to be shipped to this country for some time while it meets a backlog of orders in bigger markets such as the United States and China.