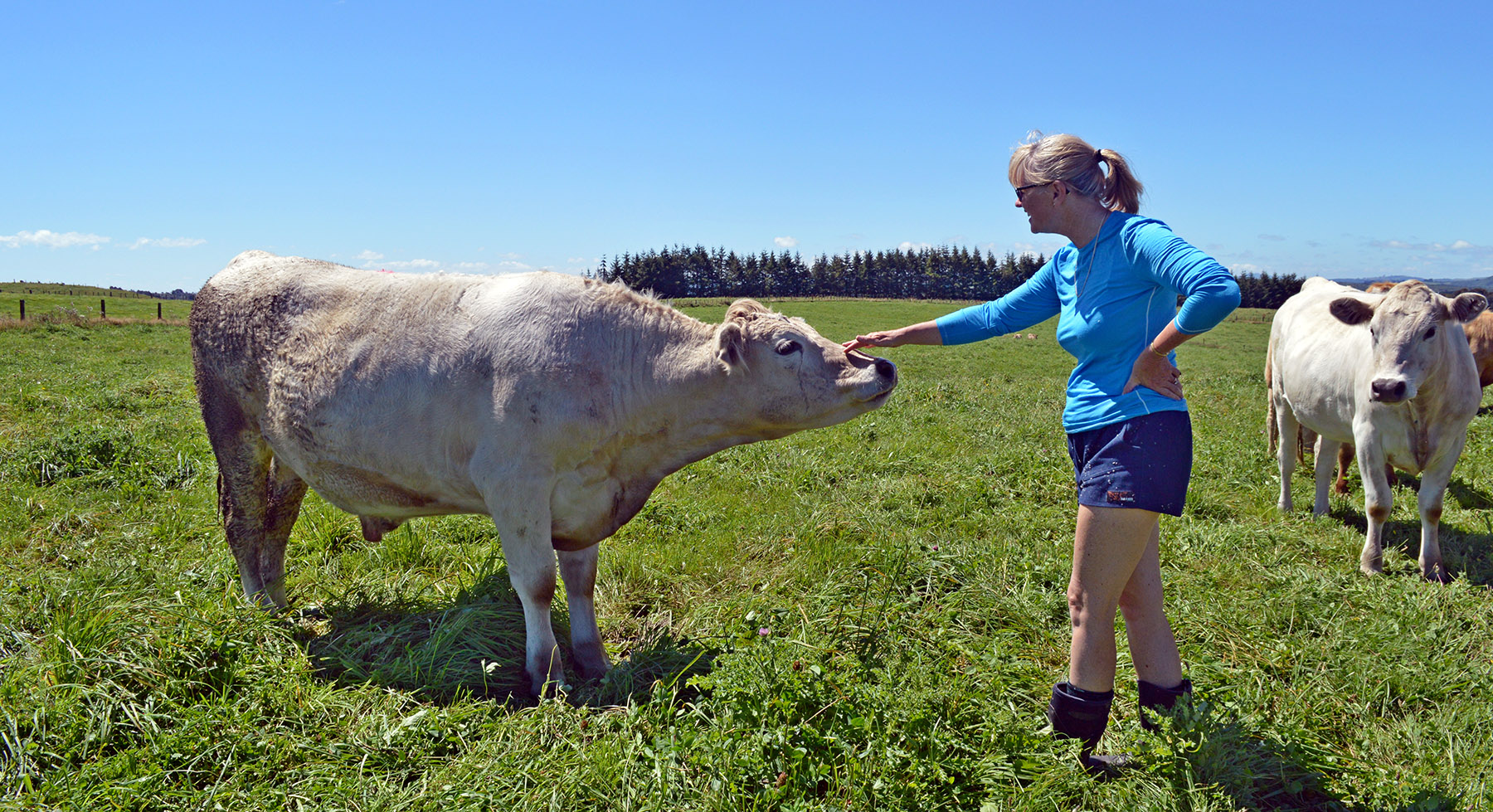 Who is the real Polluter; the Farmer or the Consumer?

Will consumers pay a premium to food producers doing the right thing by the environment? For most of us, it’s an intriguing conversation starter. For Mike and Sharon Barton, their very future hangs on the answer.

The Bartons run an award-winning 142 hectare sheep and beef property on Taupo’s western shore, where a strict cap on nitrogen discharge has been in effect since 2011. Known colloquially as the ‘N Cap’, it was imposed by the Waikato Regional Council in a bid to limit nitrogen leaching into the lake through Taupo’s highly porous pumice soils. Because most of the nitrogen load can be traced back to animal urine, it’s effectively a cap on stocking rates, and hence productivity.

The Bartons began to truly appreciate what the cap meant for them in 2007, when Mike in his role as chairman of a local farming collective was asked to give evidence at an Environment Court hearing. Using financial records from their own farm and five others in the catchment, and assuming rising costs, static incomes and capped livestock, he modelled the likely economic impact. His conclusion? Worst case, they’d all be insolvent within a decade.

It was a shock, and for some Taupo farmers, utterly demotivating. The Bartons, too, had to do some soul searching. They were former Auckland academics who’d bought their farm in 2004 just as the nitrogen issue was starting to bite. Now they were faced with some unsettling calculus. They’d already wrung all the performance they could from their Charolais-Angus herd; they couldn’t grow the quantum of meat per hectare. Their only option, they realised, was to somehow extract more value from the meat they were producing.

The result is ‘Taupo Beef’, a premium beef and lamb brand sold in a number of high-end restaurants, specialist retail outlets and supermarkets around the North Island. Crucially, the label is promoted not only on the merits of the meat – grass-fed and aged for at least four weeks – but on the fact that the Bartons’ farming system helps to protect Lake Taupo. It’s a big experiment, a bid to see if the New Zealand consumer will pay a price that more closely reflects the cost to the producer of farming sustainably under environmental limits.

“We had the view that if visitors to Taupo were impressed by the water quality and what we had done as farmers, they might be willing to pay a premium for meat grown in a manner that protected the lake,” says Mike, a former chairman of farmer group Taupo Lake Care and a trustee of the Lake Taupo Protection Trust, the body responsible for reducing the catchment’s nitrogen output.

They tested the waters, so to speak, with a 2011 trial at three top local restaurants, including the Hilton Lake Taupo. Restaurant staff were schooled on all the qualities of Taupo Beef, but also on the cap itself and how farmers were responding, so they could tell the story to interested diners. At the Hilton, the product was offered alongside the incumbent Angus eye fillet, but priced at $42.50 versus $38.50. Despite the premium, it was soon outselling the conventionally produced alternative four to one, and even after the price was raised again to $46.50 the restaurant sold twice as much of it as the Angus.

“We knew we still had to deal with the whole beef market chain, the distributors, processors, wholesalers, etcetera, but at the consumer level the trial really gave us confidence,” says Sharon.

“By the end of the four months, the hotel and the other two restaurants saw us as part of their brand. They felt that consumers saw them as doing the right thing as far as protecting the environment.”

Mike concedes that some diners would have been swayed by the product being locally sourced, while health conscious types might have been attracted by the fact the animals are grass-fed, with no use of growth hormones and antibiotics.

“But in the end we didn’t mind what brought them to our meat, because very quickly they got involved in the water quality story, and that became as important as any other driver. For us the real success was that it allowed us to have conversations with consumers, and allowed them to begin to understand that their purchasing decisions can and will impact on environmental issues.”

The Bartons were able to bolster their case for charging an environmental premium with an official endorsement based on two years of auditing of their operation by the regional council.

“We felt the auditing they [required] every farmer to undergo in relation to the [nitrogen cap] could either be viewed as a negative, or it could form the basis of a validation of our brand claims around water quality,” says Mike of the ‘Protecting Lake Taupo’ tick displayed on every Taupo Beef product. “If we didn’t have that auditable and verifiable water quality tick, and people didn’t feel that what we were doing was robust, then we wouldn’t have got far at all.”

Since the trial, their focus has been on scaling the business. They found a proactive national distributor, and have built the brand so effectively they’re now able to call on other Taupo farmers to supply the market. Mike anticipates volumes will double again during this summer, “which gives us a chance to get real scale”.

Yet this is still very much an experiment, with success not guaranteed. “I’d have to say that while we’re getting a premium, it’s not yet fully meeting the costs of protecting the lake,” says Mike. “And I guess you’d expect that, given we’ve been selling food here in New Zealand for at least 100 years with none of the environmental costs of production built into the price.”

“But this applies to food producers around the world. We’ve all received less and less for our product over the last 50 to 100 years, and what we’ve done in response is to intensify, to grow more per hectare to cover our rising costs.”

In Taupo, intensification is off the table. And other farming regions will soon be grappling with similar pressure as government reforms to the management of fresh water begin to bite. It’s coming to a farm near you, in other words.

The Bartons, who last year won the Sustainable Business Network Awards to go with their 2014 Ballance Farm Environment Awards supreme gong, are part of a project to replicate the Taupo Beef model in other catchments around New Zealand. Still in its infancy, the Food, Farms and Freshwater (www.3f.co.nz) initiative will hinge on the development of a common auditing process.

“It’s a big issue for New Zealand: how do we brand our food from the point of view of its impact on the environment, and how do you compare people from different catchments with different challenges and diverse regional councils with different policy approaches?,” says Mike.

“If you have a farmer here in Taupo dealing with the nitrogen issue, and a farmer in Northland dealing with sediment, and they’re both doing the right thing, the premium they get should be the same. We have to come up with an auditing process such that, if we say the meat is produced in the right way from a water quality point of view, regardless of the particular nutrient challenge, the consumer has got confidence.”

None of this works, however, without an acceptance from the consumer of their role in the environmental degradation caused by food production, and their part in the solution.

“For us, the real success of our brand is about having open, honest conversations between the food producer and the consumer about sharing the responsibility for water quality. We say the premium that you’re willing to pay for food grown in a manner that protects water quality is the true measure of how much you value it. Another way of looking at it: eating isn’t divorced from the agricultural process – it’s the final step in that process.”

“Of course, as a nation we’ve got to then start thinking about the greenhouse gas emissions associated with food production, and the impact on biodiversity. If you were to build all those costs into the production system it gets challenging, but that’s where this journey eventually has to take us.”

Ultimately, it’s a conversation that, like most of the food we produce in this country, has to go offshore. Will a shopper in Beijing pay a premium to protect Lake Taupo, for example?

Sharon says the jury is out, and believes success will depend on how the marketing is framed. “I do believe they’d be happy to know that [the meat] is from an environmentally good area, with good soils, clean air – the whole package.”

They’ll know the answer soon enough, with the obvious next move being to test the overseas market.

“We won’t consider Taupo Beef has been a success until we’ve got a robust and profitable export market, where the issues are canvassed with the consumer,” says Mike, who is convinced they are pioneering a model that other kiwi food producers will eventually adopt. “I don’t think we have any choice as a nation but to go down this track. We can’t stay in the agricultural commodity market space and then also mandate water quality limits. We can’t earn enough to pay for the cost of those limits.”

“If we don’t start earning a premium for our environmental performance then one of two things will happen: either we won’t achieve our water quality goals, or we’ll drive food production to those countries where they don’t yet value water quality. Because you just can’t build that cost structure into your production system and not get some return for it.”