One Number to Rule Them All: Are We Stuck with GDP?

Businesses do it. NGOs do it. The New Zealand government plans to do it. Clare Feeney conducts a thought experiment on why governments should report on their national accounts across the Six Capitals and finds this is at the heart of what government is for.

What is the government for?

With businesses and non-profits now measuring value-add across the Six Capitals, should governments do it too? Is this what the government is for? If so, can any government afford to do it?

I looked up ‘government’ in my old Oxford dictionary and in between ‘gout’ and ‘gowk’; found ‘government’. Not finding the definition of what ‘government’ is very helpful, I searched for definitions of what government is for.

Yes, government exists to balance individual freedom with state authority and maintain orderly relationships within and between states – and also to:

“The care of human life & happiness, & not their destruction, is the first & only legitimate object of good government.” – Thomas Jefferson

But economic growth has dominated government discourse since 1945, growth in GDP seemingly the sole national goal. What’s now rapidly changing is our ability to measure wellbeing other than just economic, and this opens up a more informed conversation about how to improve them.

I wrote this article to discover my own thoughts on how it could work for a government to report against the Six Capitals. I found that I think they can – and so does our government!

“Prosperity for the few founded on ecological destruction and persistent social injustice is no foundation for a civilised society. … The concept of governance itself stands in urgent need of renewal.”  Tim Jackson in his seminal book Prosperity without Growth (p5)

1) ‘Develop and apply a robust macro-economics for sustainability

2) ‘Redress the damaging and unsustainable social logic of consumerism

“GDP measures everything except that which makes life worthwhile.” – Bobby Kennedy, 1968

A new approach to macroeconomics for sustainability must provide for the things that make life worthwhile. Happiness or wellbeing economics has been on the rise for many years, with a growing body of research showing happiness is more detached from financial wealth than we thought. It can also be a driver of economic development. This offers governments many different policy levers to improve wellbeing.

Leading economists like Costanza, Daly, Deaton, Jackson, Layard, Sen, Stern, Stiglitz highlight the vital importance of drawing what have been previously treated as social and environmental externalities into the heart of our economic analyses. Now the New Zealand Treasury has added heft to Stats NZ’s long-standing work on indicators that measure the Resource Management Act’s social, cultural, environmental and economic wellbeings.

Here we align the four well-beings with the Six Capitals against which businesses report. And rather than traversing the burgeoning literature on the indicators themselves, I’ll overview how it could look if governments measure – or don’t measure – welfare, needs, betterment, goals, growth, prosperity and progress in terms of:

Well-being economics for a sustainable future: the role of government

If a government is to ‘develop and apply a robust macro-economics for sustainability’, how do we define that economy? It’s fast emerging as what I’m calling the Wellbeing Economy, a zero waste, net-zero carbon, circular economy focused on adding value across all wellbeings while operating within planetary boundaries. 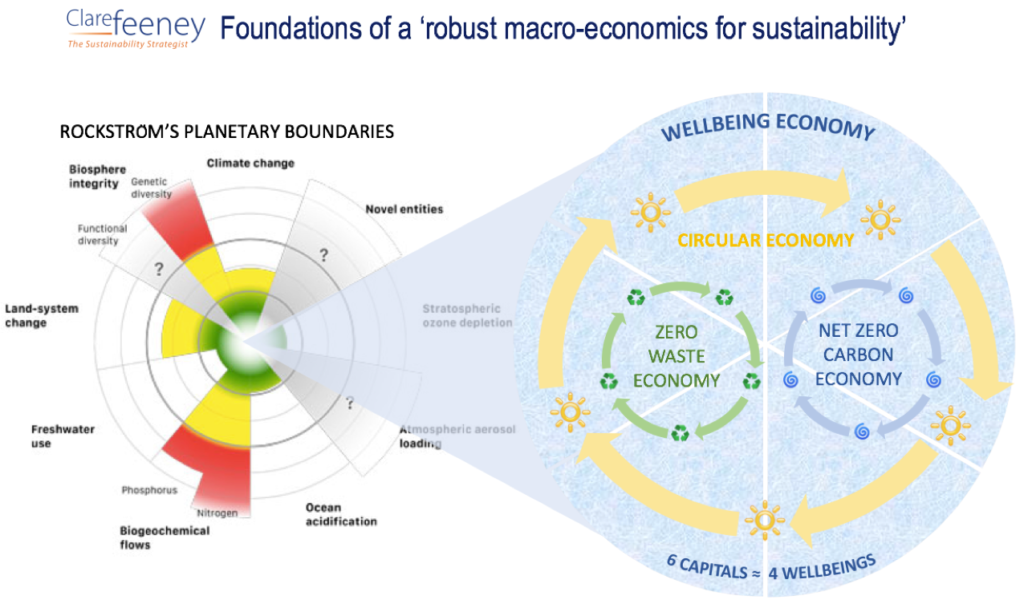 “I don’t think that GDP represents what New Zealanders think of as success … Success would be measured through financial capital…, natural capital, human capital and social capital … This is not some light, fluffy happiness index. This is actually based on indicators and measures we can track.” – Grant Robertson, New Zealand Finance Minister, in an interview with the New Zealand Herald

In what will be a world first, the New Zealand government’s 2019 budget will be a ‘Wellbeing Budget’ based on Treasury’s wellbeing framework. Encouragingly, it’s resonating with businesses as well as communities.

This is something every New Zealander can be proud of. If this is to succeed, however, the government must bring us all along with it, especially those most wedded to the growth-based linear economy measured solely by GDP and those with the highest exposure to the risks of transition.

“I shop therefore I am.” Graphic designer Barbara Kruger

Next, how can government ‘redress the damaging and unsustainable social logic of consumerism’? Does this fall within a government mandate, or is it an existential matter?

We’ve known for a long time that increased consumption doesn’t equate to more happiness and better outcomes for people across all wellbeings, but what should or could the government do about it?

Many social movements reflect dissatisfaction with the materialistic results of the growth-based economy focus on consumerism; think slow food, downshifting, authentic happiness, farmers markets and more. These fit neatly within the wellbeing-focused macroeconomy depicted above.

Consider also community outrage at environmental externalities such as plastics in our seas. Many governments are now responding to this issue, and firms selling single-use or short-lived consumer products are realizing the need to rapidly innovate their way into a circular economy.

Government has both a direct and indirect influence on consumerism: it can put in place policy and legislation and lead public opinion on a wellbeing economy, but by designing waste minimisation and more efficient resource use in all sectors and investing across all wellbeings, it will also lay the foundations for deeper and less fleeting community happiness than consumerism has provided.

“Prosperity goes beyond material pleasures … It resides in the quality of our lives and in the health and happiness of our families. It is present in the strength of our relationships and our trust in the community. It is evidenced by our satisfaction at work and our sense of shared meaning and purpose. It hangs on our potential to participate fully in the life of society.”  Tim Jackson, Prosperity without Growth (p5)

Ultimately, I believe that government must commit to reducing consumption that does not add value to wellbeing. This brings us to government’s third urgent task to ‘establish and impose meaningful resource and environmental limits on economic activity’, something the OECD has already pointed out to us.

“The Earth belongs to each generation … no generation can contract debts greater than may be paid during the course of its existence.”  Thomas Jefferson, September 6, 1789

Here the government must tackle more difficult technical issues, such as:

This will take time. The best time to start was two generations ago – but the next best time is now.

Can we afford a wellbeing-based economy?

Governments’ core function is to raise financial capital in order to transform it into the other capitals, as the Auckland Council’s Alec Tang puts it. Far from being intangible, Alec says this added value is expressed in the form of physical assets like roads, libraries, parks, pipes as well as community development services that help to build social cohesion and a sense of community belonging. This wellbeing approach has informed the Auckland Plan.

But can we afford to pay for government budgets and plans that focus on wellbeing?

Consider the diagram below. Assume that government expenditure is the same in each quadrant. How effective is that spend at delivering wellbeing under different policy/implementation and leadership settings? 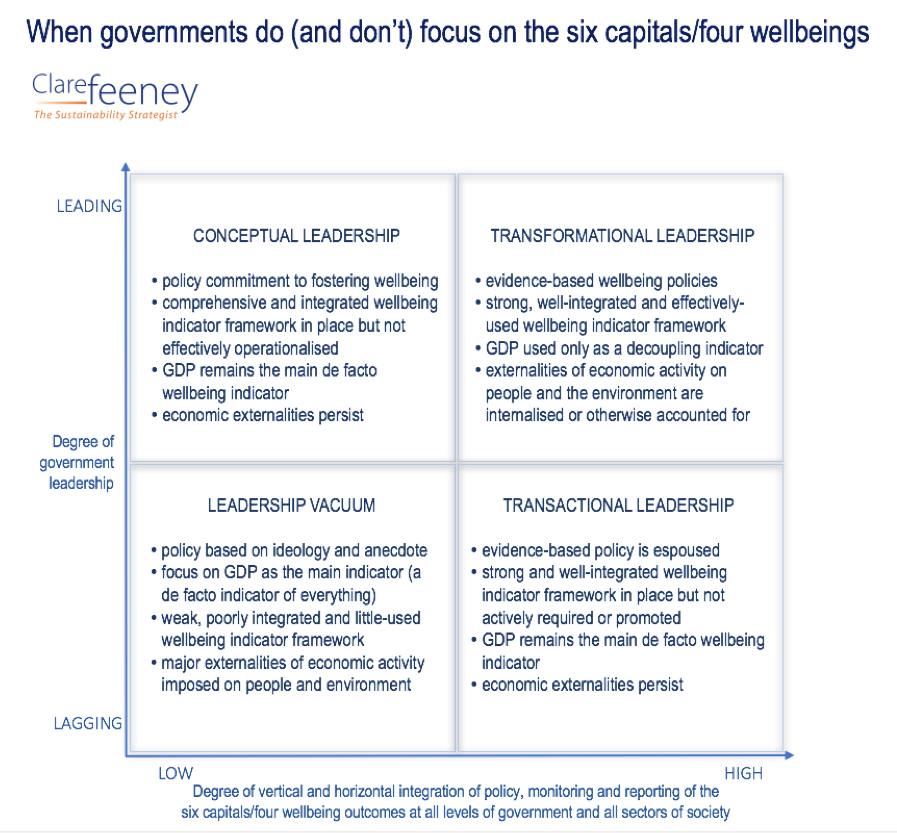 In a leadership vacuum, poorly targeted investment means money will be spent on remedying instead of preventing the effects of present and future externalities that affect all the wellbeings.

Overly conceptual leadership sets up a disconnect between the commitment to espoused outcomes and the national ability to deliver them, again resulting in ineffective wellbeing expenditure.

Transactional leadership sets up the systems that could deliver wellbeing, but without the integrated structural changes necessary to embed these solutions into government vision and community engagement.

Transformational leadership together with robust processes for vertical and horizontal integration of policy, monitoring and reporting of well-being outcomes at all levels of government and across all sectors of society results in more targeted and accountable government expenditure. However, we may ask, ‘leadership transforming capital into what?’ The answer is the wellbeing economy depicted above. Herein lies the potential for affordable and cost-effective government investment in wellbeing.

Expenditure for a transformational leadership budget within an affordable envelope can be found in many ways, including by shifting (not cutting) taxes on ‘an ecological basis, moving some taxes off ‘goods’ such as work and enterprise (personal income and profits) and on to ‘bads’ – waste, pollution and overuse of scarce resources for example’. This is one way of internalising or otherwise compensating for the effects of economic externalities onto the other wellbeings.

Crucially, to achieve sustainable happiness and prosperity across the wellbeings, successive governments must sustain a collective commitment to all the wellbeings.

Sure, it won’t be easy. But it’ll be very exciting!

“Prosperity consists in our ability to flourish as human beings – within the ecological limits of a finite planet. The challenge for our society is to create the conditions under which this is possible. It is the most urgent task of our times.” Tim Jackson, Prosperity without Growth (p5)

This is a big topic covered in massive detail by Nobel Prize-winning thinkers. I have not attempted to summarise their work, but aim to encourage reflection, conversation and action.

My heartfelt thanks go to those of my friends and colleagues listed below for their help, to those who critiqued my earlier articles and sowed the seeds of ideas for this one, and to Pure Advantage for being interested in the reflections of an environment and sustainability strategist who is not a statistician or an economist!