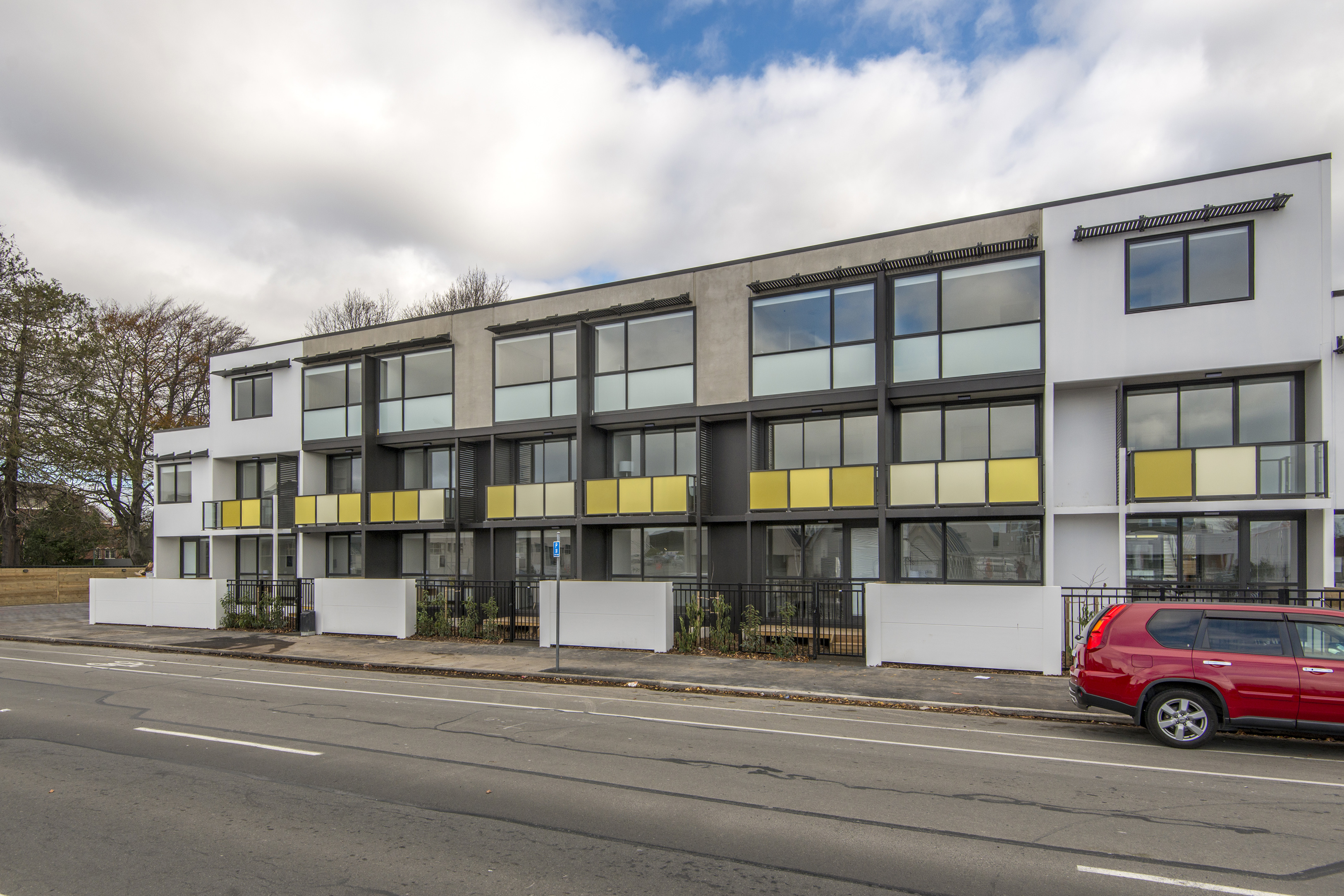 A red brick heritage wall once dominated the street frontage at 399 Manchester Street, in Christchurch. The wall collapsed during the 2011 quake, destroying a piece of Christchurch’s urban history but opening a path for an apartment development that sets a new benchmark for social and sustainable housing.

The recently completed “Stalla” apartment complex is the face of Housing New Zealand’s new mixed tenure policy, in which state tenants will live alongside private owners in “tenure blind” medium-density housing developments. The building, which was developed by Auckland-based Legacy Property and designed by award-winning architect Andre Hodgskin, is also pioneering in sustainability terms. Certification wasn’t finalised by presstime, but the developers are aiming for a Level 6 Homestar rating, which would make it the first residential development in the South Island to achieve Homestar credentials.

Mitchell Jefferson, Development Manager for Legacy Property, characterises the project as being a test case for the company, too. “This has been three years in the making.”

Some background is useful here. The land at 399 Manchester Street was owned by Housing New Zealand and earmarked for state housing from as early as 1957. After the 2011 quake, HNZ decided to develop Manchester Street as the first of a programme of five mixed-tenure housing developments, and as part of its commitment to deliver 700 new homes in Canterbury by the end of this year. Legacy Property was contracted to develop 26 one and two-bedroom apartments, with HNZ taking 11 units. Andre Hodkins’ Auckland practice, Architex, was engaged to handle design.

Jefferson says he had the idea of chasing the Homestar rating after a study tour of medium density residential developments in the United States.

“It’s really important to plan for it from the beginning, because it is very hard to retro-fit, or to decide halfway through construction that you want to achieve Homestar,” he says. “We made that commitment at the very start to try to aim for Level 6 with this development. We had it incorporated into the building consent drawings, and we’ve been trying to get to that level ever since.” 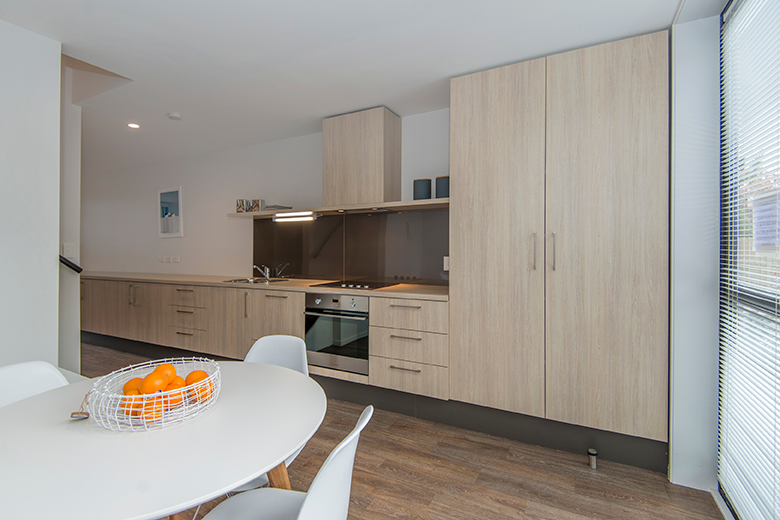 There is a swag of sustainability features in the Manchester St development, including:-

Beyond these individual features, the building’s design and construction were driven by sustainability concerns. Prefabrication was used wherever possible, with precast insulated concrete sandwich panels for the load bearing walls. (Along with concrete flooring and ceilings, they create thermal mass).

The use of offsite manufacturing also helped to reduce construction site waste, says Jefferson. “All the cabinetry in the kitchens, the bathrooms, the laundry and the bookshelves were all prefabricated flatpacks. We also used the same vinyl throughout the bathrooms, kitchens, living rooms and even some bedrooms, so less waste was created.”

The units, meanwhile, were arrayed in two long blocks running north to south, with glazing deployed to allow maximum sun and light to penetrate, while on the southern side windows were minimised to retain heat.

Jefferson says the developers adopted a flexible approach to insulation. “You can’t assume every unit is the same; you need to identify the ones that may lose more heat, and upgrade them. For example, there’s a one-bedroom unit on the southern side with a window near its entrance to help with security. We upgraded that window with a low ‘e’ coating, and went for a really efficient high-density insulation.” 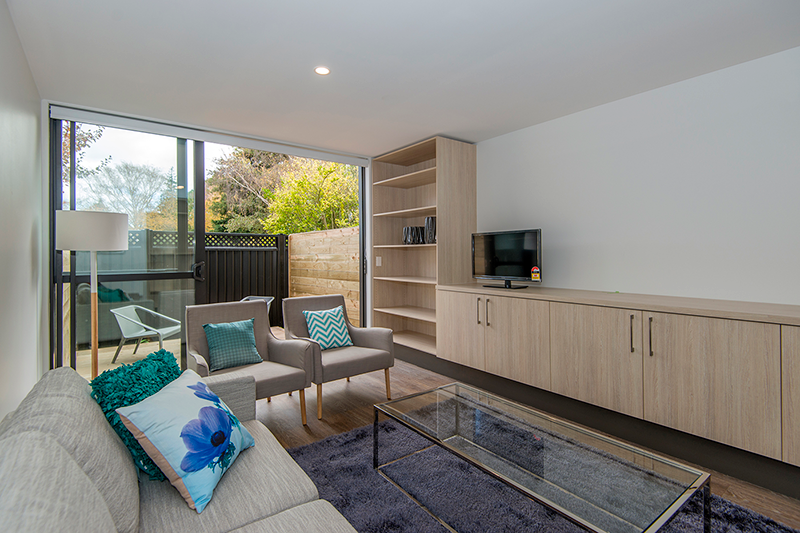 Some elements of the sustainability plan are yet to unfold. The communal vege gardens, for example. “Once everyone has moved in I’m going to meet them and ask how they want to use the gardens,” says Jefferson, who adds that he hopes the decision-making should help foster community feeling. “One option is that that everyone works together and plants the gardens. Or we could divide the gardens into little plots and everyone gets their own. Or, if no one is interested, then we’ll pay for the area to be planted in fruit trees that can be managed by the site manager. Then everyone can just enjoy the fruit.”

It’s a fine plan, and an optimistic note to strike in the heart of quake-struck Christchurch. Housing New Zealand has described the Manchester St development as the start of a building programme that will “change the face of social housing”. For his part, Jefferson believes it signals the way forward on apartment development.

“It’s inevitable that this is the future of medium density development, especially from a sustainability point of view. We just wanted to be at the forefront, to show that it can be done.”