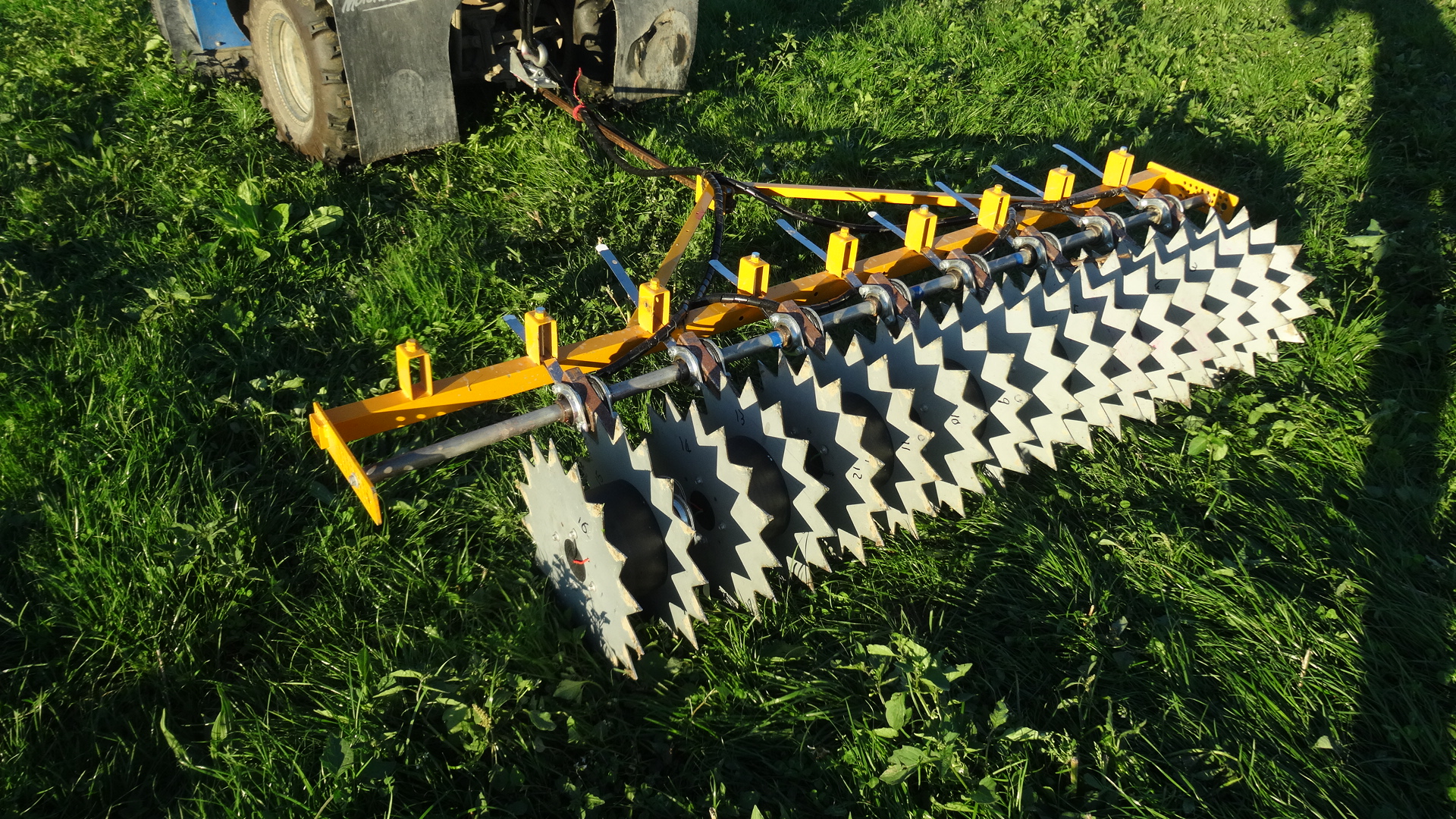 Meet Spikey. Eight metres long and equipped with a set of spinning saw-toothed discs, it looks like something you might take into battle – which, depending on how you view the issue of nitrate leaching, isn’t far from the truth.

An invention of soil scientist Dr Bert Quin and robotics engineer Geoff Bates, Spikey is designed to detect and neutralise urine patches on farm pasture, a significant source of nitrate leaching into waterways. Dr Quin describes it as possibly our most serious environmental problem, and says it has grown hugely as a result of intensive dairying.

“It’s a massive issue. With cows you get a much higher concentration of nitrogen in the urine, and because production has been ramped up, you’re getting more nitrogen returned to the land. The fundamental problem is that the concentration is much greater than the pasture can use.”

Quin and Bates, whose company is called Pastoral Robotics, unveiled Spikey at the recent National Fieldays which, despite being rooted in traditional heartland New Zealand, reliably showcases some of our most exciting agritech innovation. Among other products at Mystery Creek, for example, was an effluent recycling system that turns raw dairy shed effluent into water so clean you can drink it, and a smart calf-feeding system that automatically dispenses customised feed while gathering data to optimise rearing. (More on those two later)

But back to Spikey, an idea which arose from a chance meeting between the two Auckland-based co-creators a couple of years ago. Quin, who had been working on the animal-urine problem since the 1970s, says that while there were various nitrate inhibitors on the market, they tended to be applied indiscriminately because no one had yet devised a way of accurately targeting urine patches, which typically only cover five per cent of a paddock. So he and Bates set out to do just that, inventing a robotic trailer that detects fresh urine by measuring electrical conductivity in the soil.

“The crucially important thing is to detect the patches soon after they’ve been laid down – within two days, really,” says Quin, who notes that after 48 hours the urea in cow urine quickly converts into nitrate nitrogen, which is completely water soluble and vulnerable to leaching into groundwater.

When Spikey detects a urine patch, it releases a proprietary mix (there are no residue issues, and it rapidly breaks down into harmless components, says Quin) that spreads the patch laterally while also promoting grass growth. “As sure as night follows day, because the grass has taken up more nitrate than it would have otherwise, there is less nitrate to leach.”

In fact, Quin reckons that Spikey should reduce nitrate leaching by at least 50 per cent, while at the same time growing more pasture. “Unlike other solutions touted for the nitrate problem that typically involve direct or indirect costs, this is actually going to make money for farmers,” he says.

Having won the “Most Innovative” award at Fieldays, Pastoral Robotics is now gearing up to take the product to market. The plan is to develop three commercial Spikeys, with an on-farm trial lined up for Spring, followed by full launch next year. The company is also working on a fully autonomous robotic towing vehicle, and a spreader may be added to Spikey to enable simultanous paddock fertilising. 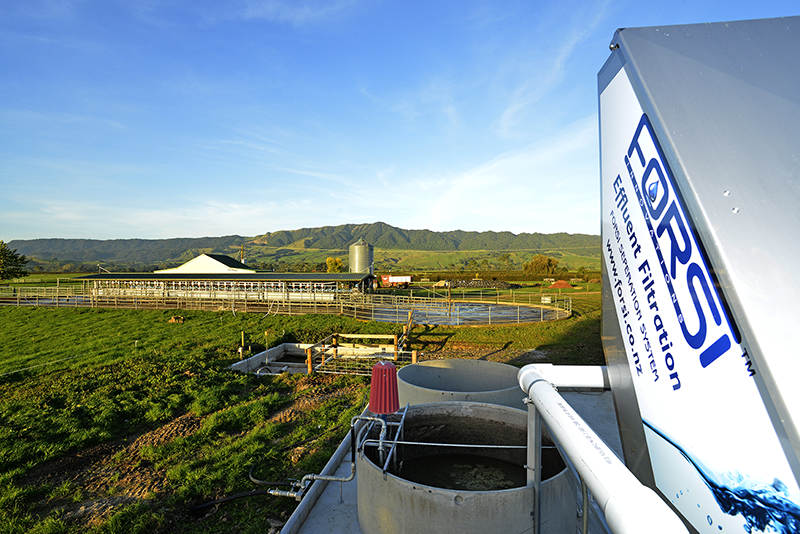 Forsi, which was founded by Craig’s father Terry Hawes as a water filtration venture, has spent eight years developing the technology, a multi-step system that begins by taking cow effluent through a large sand trap and over a slope screen separator. Contaminants are then removed by a suspended solid removal system, and the water is put through yet more filtration, followed by four sterilisation steps.

For farmers, who have to deal with constantly changing effluent compliance regulations, it promises a far simpler life. “Farmers are constantly up against issues like whether their effluent system meets regulation, whether their ponds are big enough, whether they have a large enough irrigation field, and so on. With this system you don’t need effluent ponds, or big irrigation fields, and that issue of compliance no longer exists because you’re dealing here with clean water.”

The Forsi system also delivers secondary benefits. For a start, the solids are composted down and can eventually be used as a cost-saving fertiliser. But additionally, it creates clean re-usable water, an increasingly valuable resource on New Zealand farms.

“If as a farmer I can get clean water at the end of this process, then I’m not having to pump so much out of the ground,” says Hawes, who notes there is a growing issue of bore water being contaminated with elements such as iron, necessitating expensive filtering treatment. “This water can be reused by farmers for their wash-downs, or for their cows to drink in times of drought. If they’ve got a paddock that they want to irrigate in the middle of a drought, then they’ve got clean water to use, without also having to worry about what might run off into streams.”

Since Fieldays, the company has had two reps constantly on the road following up enquiries, with three sales almost ready to go. At between $295,000 and $350,000 per unit, it’s a big purchase, but it should deliver savings over the long term. And Hawes is convinced the system could change dairy farming for the better, mitigating the sector’s environmental impact.

“If every dairy farmer had one of these it would take their farming practice to a whole new level,” he says. “The practice today is to have irrigators spewing raw effluent that [could] end up in waterways. We’re taking that part of it away, reusing it, capturing all the valuable elements, and effectively giving the money back to farmers.”

Another potential gamechanger that piqued the interest of dairy farmers at Fieldays was Calf SMART. An automated, cloud-based calf rearing system tailored for New Zealand conditions, it’s the brainchild of entrepreneurial engineer Ben Neal, who grew up on a dairy farm in Dannevirke. Neale spied shortcomings in the automated feeding systems already in use on local farms, which are imported from Europe and don’t necessarily fit the New Zealand setting. By contrast, his four-stall feeding system is robustly engineered, and scaleable up to 2000-plus calves.

It’s also, as the name suggests, very clever. A calf entering a stall is identified by an ear tag antenna, and the system dispenses a feed recipe optimised to its particular requirements. Calves are weighed at each feed, with the data accessible by smartphone or home computer so farmers can closely monitor the progress of each animal. The goal is to produce better quality and more consistent herds, faster. 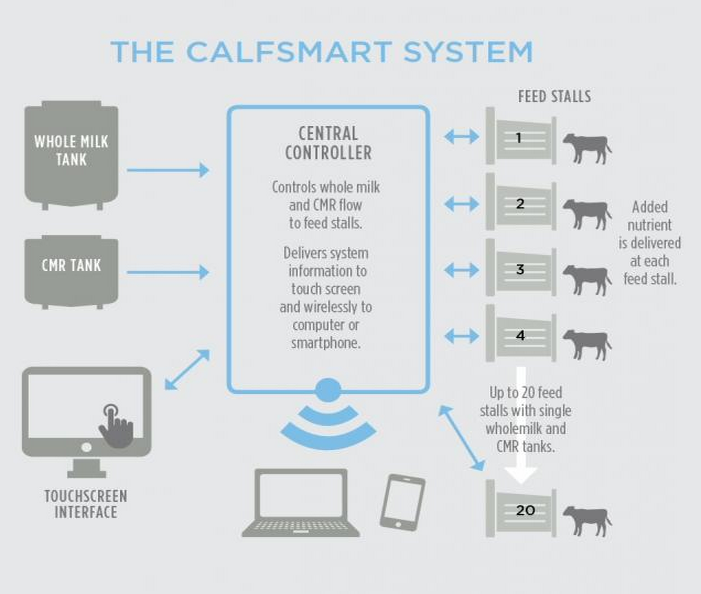 After three years of testing and, more recently, on-farm trialling, the Calf SMART system is primed for commercial release. Neal says the company is putting in a large system at the moment in the Manawatu, and anticipates a further eight installations in Autumn 2016, then ramping up the following Spring.

As well as financial benefits for farmers, Calf SMART delivers environmentally, he adds. Optimising calf feed militates against over-consumption. And whenever the system enters a hot wash cycle, any remaining milk feed product is pushed to storage tanks, for later use. “It’s really efficient and there is minimal wastage, with minimal product going down the drain.”