It’s all very well having the best mouse trap under the sun to catch little Jerry, but if you can’t afford to buy his favourite cheese to catch him then your strategy is slightly flawed.

The same goes for solar.  No matter how advanced and capable solar PV technology has become in recent years, if the market can’t afford to adopt it, then the model is broken. Those who can successfully build businesses that provide the market with affordable access to solar will not only be pivotal in transitioning the world to clean and distributed energy, but will also stand to pocket a pretty sum of money.

In the US, zero-money-down and third party finance business models have been significant in bolstering the country’s exponential increase in the market uptake of solar energy. Solar start ups like Mosaic, Sungevity, and Solar City are now literally running all the way to the bank and gaining growing investor attention as their business models enable customers, large and small, to enjoy lucrative energy cost savings from day one. One smart Kiwi company that has effectively established a lucrative foothold across the growing New Zealand and the Asia Pacific solar market, simply by understanding the importance of business model innovation, is Sunergise.

Sunergise’s unique point of difference is its one-stop-shop, no capital down business model. Much like a conventional power utility, Sunergise provides and funds everything along the solar energy generation and distribution value chain, from solar panels to installation, maintenance right through to insurance. Customers just pay an agreed rate for the solar electricity generated over a fixed period of time at a cheaper rate their usual power utility would charge.  No prohibitive upfront capital outlay. Just cheaper and cleaner energy – from day one. A pretty compelling option.  So much so the company was recently announced as a finalist in the New Zealand 2015 Innovators Awards Cleantech and Sustainability category.

According to business disruption and clean technology expert and Stanford lecturer, Tony Seba, by 2030 the world’s power supply will, by and large, consist of renewable energy. Eighty percent solar, and the remaining twenty percent wind. Given that only two percent of New Zealand’s power supply is currently sourced from solar, Sunergise stands a lot to gain when market demand heats up and as conventional utility power prices continue to rise. According to Paul Makumbe, CEO and Founder, most business models around wholesale solar energy generation in New Zealand are based on a production based model. Sunergise is a rare exception. “We mimic the utilities in that we’ll put in a solar system and we won’t charge you for what it produces – only for what you consume. So we take a little bit more time in understanding your profile in terms of your power consumption, what you’re wanting to do.” Makumbe says what makes Sunergise a particularly attractive option for its growing customer base is its transparent and fixed pricing model with no hidden costs down the line.  “What you find in many power agreements in the US and what’s now coming out in New Zealand is that everyone puts in an inflation adjustment or price escalator (inflation, built into your solar lease). We don’t have that. So what you pay today is what you’ll be paying in ten years, twenty years from now.”  While many other companies would see this a risk, Makumbe thinks of it as a key point of differentiation and a successful lure for potential customers.

Two and a half years in Sunergise has already established market presence across NZ, Fiji, Vanuatu, Papua New Guinea and soon Australia. Its steadily growing customer base comprises large brands including Raddison, the Sheraton Hotel Group, ANZ, Colenso and Port Denarau Marina – Sunergise’s first customer. The company has also just entered an agreement with Akuo Pacific, a hotel chain with close to one billion dollars worth of renewable assets in seventy-five nations.  The partnership will enable Sunergise to tap into Akuo’s global expertise, purchasing power and brand allow it to attack larger projects it has not had the resources or reach to do, to date. “The partnership alone takes our costs down by twenty to twenty-five percent. It also means we can absorb some of the exchange rate losses we’ve weathered lately.”

While Sunergise has a small number of residential sized installations, the company has been smart around cherry picking customers who can generate profitable and steady returns. Makumbe say its primary target market is large scale commercial clients who understand regional coverage. “We want to work with customers that have regional presence. So people like Coca Cola, Radisson, Akuo. Companies where you have one agreement covered as a region. We get a lot more value from that. You sell once and on the back of it you install across (say four) different countries.” For Makumbe the residential market is not been lucrative enough to focus on. “I don’t think that the residential model currently works on a power base agreement. You lose a lot of value on the table for the consumer, so we’re staying away from that market. I just can’t make the value stack up for a householder. But we are playing around with business models that we think would actually make sense.”

Sunergise’s market strategy is clearly paying off. Since its first solar install in 2012 Sunergise has been growing at the rate of approximately three mega watts per annum. And the company is looking to have 8.5 megawatts of installed solar generation by March 2016 across its various Pacific markets. For the solar layman amongst us, Sunergise’s 8.5 megawatts of installed solar is enough to power more than 2,800 homes.

While Sunergise is currently on a winning streak Makumbe is not one to rest on his solar laurels for long. The company is acutely aware that the business’s profitability is also largely at the whim of a highly fluctuating exchange rate. Any drops in the NZ dollar essentially eat into the company’s pool of profits, particularly since the company sources all its solar PV equipment internationally using the US dollar. Further, similar zero-money-down finance options are now entering the NZ solar utility game, driving up competition. “It didn’t use to be, but now New Zealand is actually the toughest market for us to do business. But it’s good for us. It pushes us to be a little bit more innovative in terms of our business model offer and think about the customers we really want” .

To future proof itself Sunergise is now shifting its focus away from a purely energy wholesaling model towards providing energy management solutions that emphasise customer engagement. “What you’ll notice with most solar companies in NZ, is that they approach it from an engineering and product perspective. When you look at how people interact with solar companies today there’s no real engagement. We’ve gone a different path.”

The company recently developed a customer centric energy management app that it is trialling. Makumbe says phase one of the app allows users, no matter where they sit in the business, to view in real time the amount of energy they are using and the amount of energy being used from solar vs the grid. The app also enables its customers to compare and contrast energy use within their own sphere of influence and sends out personalised messages and reminders to staff around energy management issues such as switching off computers at the source, turning lights off and managing HVAC. “What typically  happens in a solar installation is that you put it up and the only person who gets to see the cost of the bill and consumption activity is traditionally the CFO.  What we are trying to do now is put that into the hands of everyone in the company. This app has essentially enabled us to engage with our customers and their staff at a personal level”. 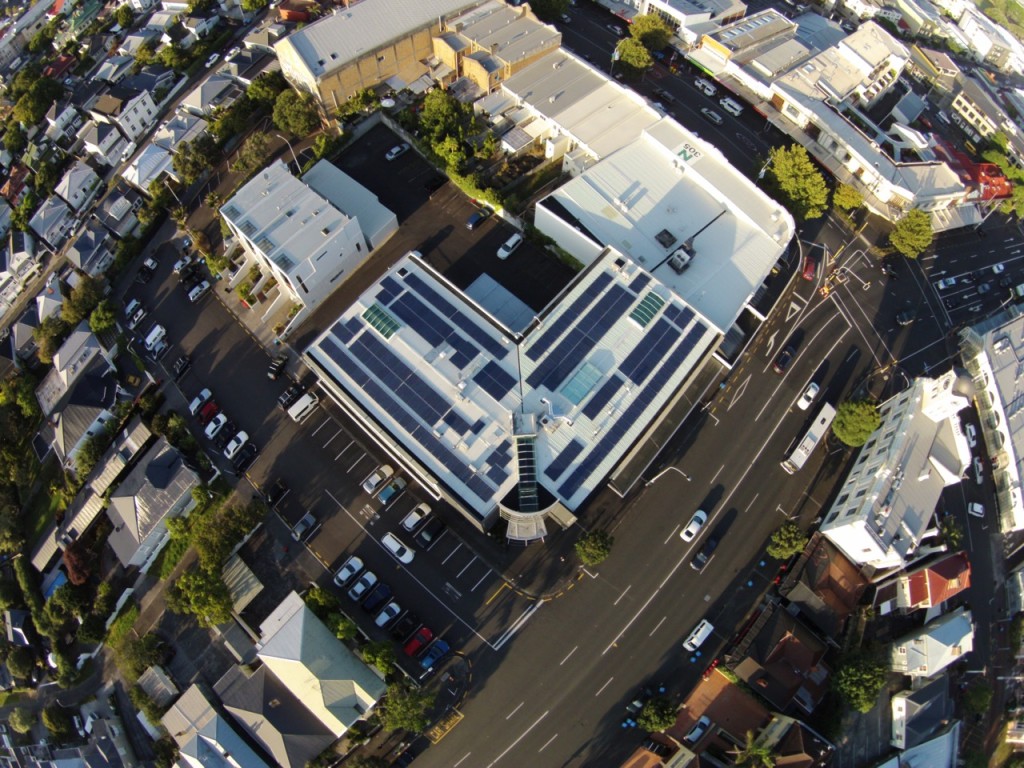 Makumbe says its first customer to trial the app, Colenso, is already saving an additional $2000 monthly by using it. This comes on top of pre-existing energy savings the company is already reaping under Sunergise’s solar power agreement.  “Colenso’s renewable energy consumption load typically runs at three percent. But their goal is to get to 40-50 percent. Not by increasing the size of the (solar) system but by looking at ways to improve their energy usage and other sustainable activities that they can carry out in the organisation that will impact on energy use. Our app’s soft focus around engagement has really helped with this.

Now Makumbe and his team are working on the app’s next iteration that will open it up to communicating with other devices so they can understand where the source of power loads are coming from – effectively turning the app into a market place.  “When we sign up a customer it’s a ten or twenty year agreement – so you’ve got a long term relationship that you want to foster. But you also want to make sure that at any point in time that you are adding value to their customers. And that’s through engagement. It’s really about how do we increase the engagement beyond the panels we provide?”. Unsurprisingly, Sunergise’s board is mainly made up of brand people and not energy professionals or systems engineers. By choice.

But Makumbe thinks the industry is still at the bottom of the ladder in terms of business models – both in NZ and abroad. He also doesn’t think there’s any reason why solar provision can not be done on an all-you-can-eat-basis. To test this hypothesis the company is now also trialling an electrification programme based on the mobile phone telephony system.  “Why is it not a daily charge? If you think about it, distributed energy generation is really no different to mobile phones. And the business models just follow suit. A power base agreement is no different to a post-pay account where they (the mobile provider) give you the device for free and build into the cost of sale. You sell electrons in the same way you sell minutes or data.”

Sunergise’s diversification across the regions and new business model exploration has ultimately allowed the company to put together investor packages that are attractive and profitiable thus making additional rounds of capital raising a fairly smooth task. Investors are now known to offer Makumbe more money than the company can actually handle.  “The vision for us is to be the leading renewable energy utility in the region that enables energy access, and as well as reducing energy costs and improving sustainability across the region on an economic basis. Not based on subsidies.  We don’t do anything that requires a subsidy cushion.”

Even with current falling exchange rates raining on New Zealand’s solar parade, Makumbe believes solar will become the dominant energy source going forward. Even in New Zealand. “We wouldn’t be staying around if we didn’t think that would happen. With the falling exchange rate a lot of consolidation will happen in the next 12 months as companies figure out which business models will work and which ones won’t. But if you can survive through this period, and prices keep coming down, it should all be fun and games”.