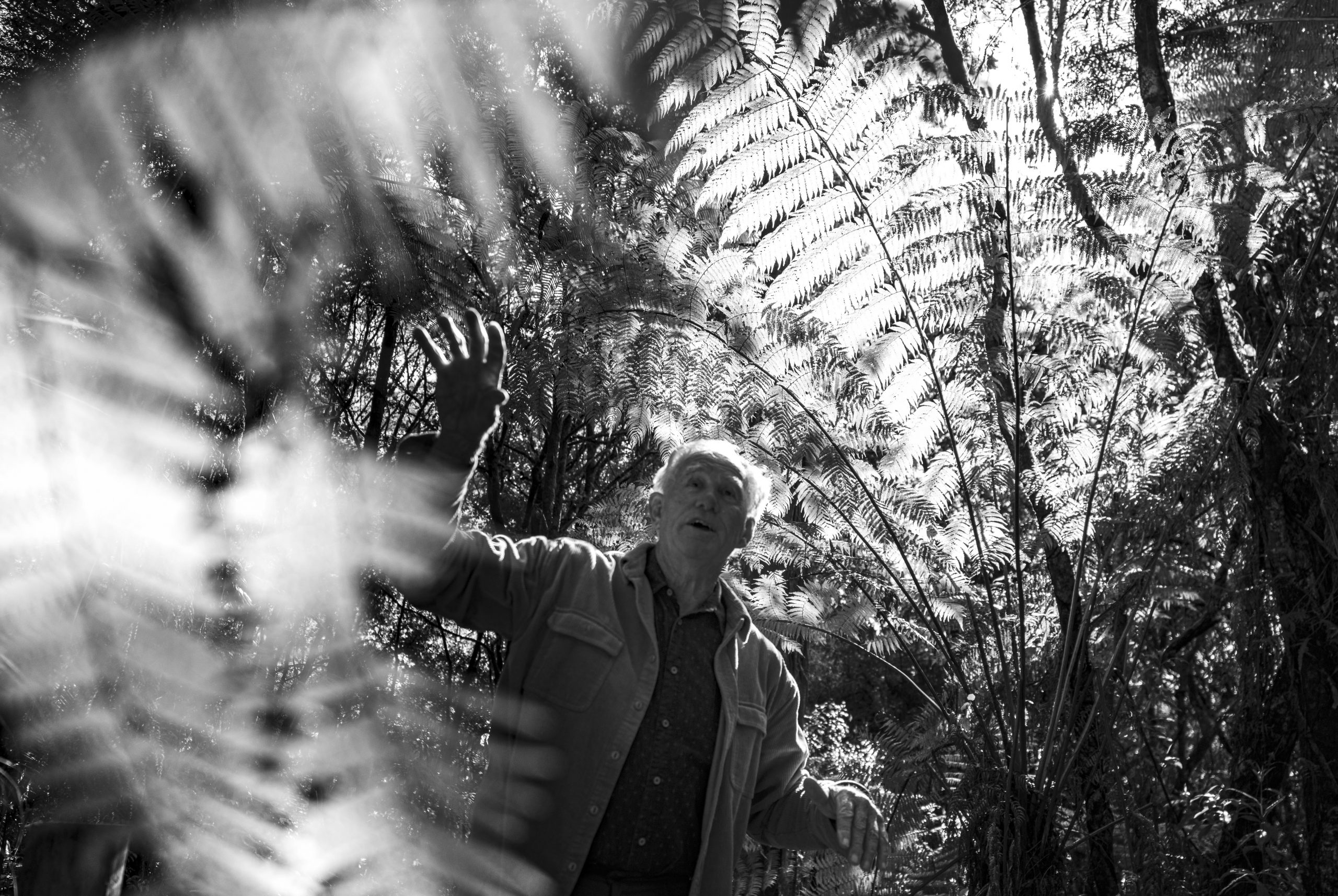 How We Got Here: Setting the Context

The loss of native forests since humans first settled in New Zealand around 800 years ago has been a disaster for hill country soils, water quality and biodiversity. Evidence of soil movement and its eventual loss into waterways and the sea is widespread. Climate change will increase the vulnerability of our hill-country soils and we urgently need to act. The best way to stabilise the soil and begin the healing process is to encourage native forest cover, whether this is by allowing natural regeneration of mānuka as a starting point or by speeding up the process by new native forest planting.

About 80 million years ago Gondwana, that enormous southern continent, started to shed a portion of herself that moved eastwards. The large rafting piece of land, which we know now as Zealandia, carried with it a wide selection of biota originating from the mega continent with current affinities with land we now call Antarctica, South America and of course Australia.

The islands that we know as Aotearoa are the tiny visible remnant, just 6%, of that migrating continental mass which now lies under the sea. We know that by 60 million years ago Zealandia and Aotearoa were sufficiently far from Australia to begin to develop some unique species and to lack some important Australian plants and animals. The upheavals of the land mass, tectonic, volcanic, and simple passage of time have left us with a couple of small islands, much of which is geologically recent. We know that we lie on a plate boundary as well as a massive active volcanic field, part of the Pacific Ring of Fire and the stochastic events arising have had dramatic and far-reaching effects on our landforms and our biota.

”The islands that we know as Aotearoa are the tiny visible remnant, just 6%, of that migrating continental mass which now lies under the sea.

However, the most recent and arguably the most dramatic effects on both plants and animals have been the extreme glacial events of the past two million years, culminating in the most recent glaciation which reached its peak just fifteen thousand years ago. The effects of these events have been dramatic, resulting in well documented extinctions of many plant species and the resulting retreat of species into ice age refugia. Whereas in continental land masses species can migrate north and south in response to climate changes, in an island there is no place to go and extinctions and disjunctions abound.

So what did we find when the last of the planet’s human migrations first arrived at these islands? Massive forests of conifers and beech species covered 80% of the land with only the high mountains free of forest. The plants and animals present presented a unique range of species with 80% unique to these shores. But we now know that what appears to be such a rich array of diversity is in many ways depauperate. We have but 2500 species of native plants which is just 0.6% of the world’s plant species. We have less than twenty widespread canopy tree species. Some countries, especially in the tropics, have many hundreds. We have but two native mammals and only 91 land-based bird species. While our long isolation from other land masses accounts for the uniqueness of our biota, that isolation, and to a great extent the past ice ages, have caused the loss of many species.

Homo does what Homo does

Human activity has accelerated the loss of species and has continued unabated. It started slowly some 800 years ago with initial colonisation of the land and it is shown that 6.7 million hectares of forest was burnt prior to European arrival. Then in the past 150 years the rush to convert Aotearoa into a large pasture has seen another 6.2 million hectares removed, reducing our native forest cover by some 70%. The removal of forest from our hill country has been a disaster for our soils, for our water, and for our biodiversity. In geological time hills and mountains slowly and sometimes violently erode under the strong forces of gravity to reach the lowland and eventually the sea. But by removing our forest cover we have accelerated that process, in the same way we accelerated species loss, by a thousand-fold.

”The removal of forest from our hill country has been a disaster for our soils, for our water, and for our biodiversity.

The evidence of that is easy to see on a high proportion of hill country. The tiny terraces called terracettes that adorn so much of our high country are evidence of soil creep. They are formed by gravitational movement down slope, exacerbated by animal tracking, but initiated, maintained and amplified by gravity. This is the mechanism whereby our hill country soils become depleted and our lowlands enriched. 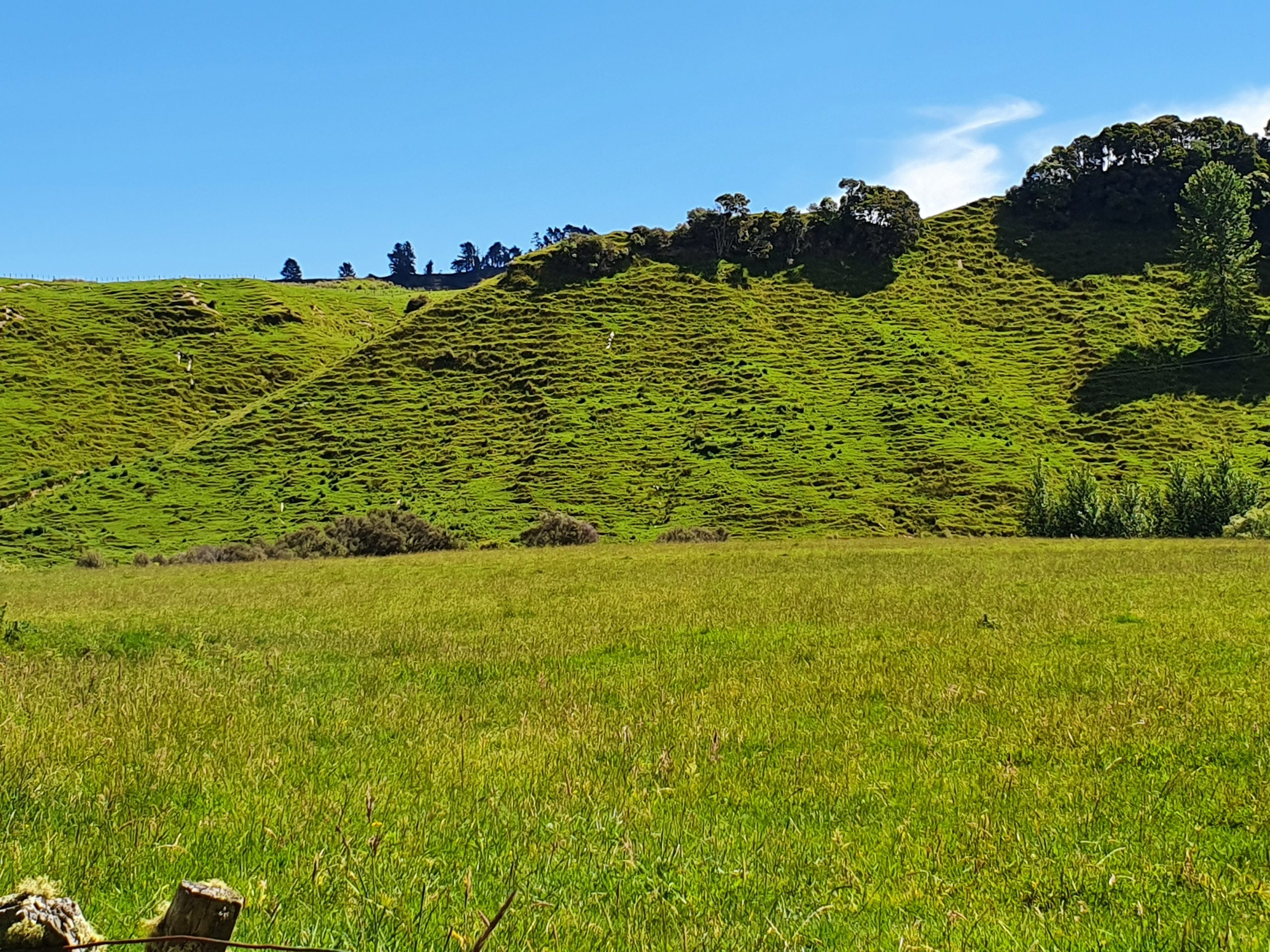 New Zealand is a very hilly country: 37% of our land mass is at a slope of 15 degrees or more, that is 10 million hectares. That of course includes our high country which is naturally erosion prone and out of production now. What we need to concentrate on is our hill country, particularly erosion-prone grazing areas.

The Ministry for the Environment (MfE) tells us there are 830,000 hectares of erosion prone grazing land in the North Island alone. There are well over a million hectares of steep land in New Zealand where a thin mantle of soil is held in place by shallow grass roots.

Even on gentle slopes the evidence of this insidious soil creep is widespread and obvious. We see the effects of this soil movement in our streams when the headwaters of our rivers are not protected. The downstream siltation and turbidity of our rivers can be traced back to this feature of our hill country. The next step, also too frequently seen, comes when this chronic problem becomes acute. The sliding creep gives way to minor subsidences that expose the bedrock and create small landslides 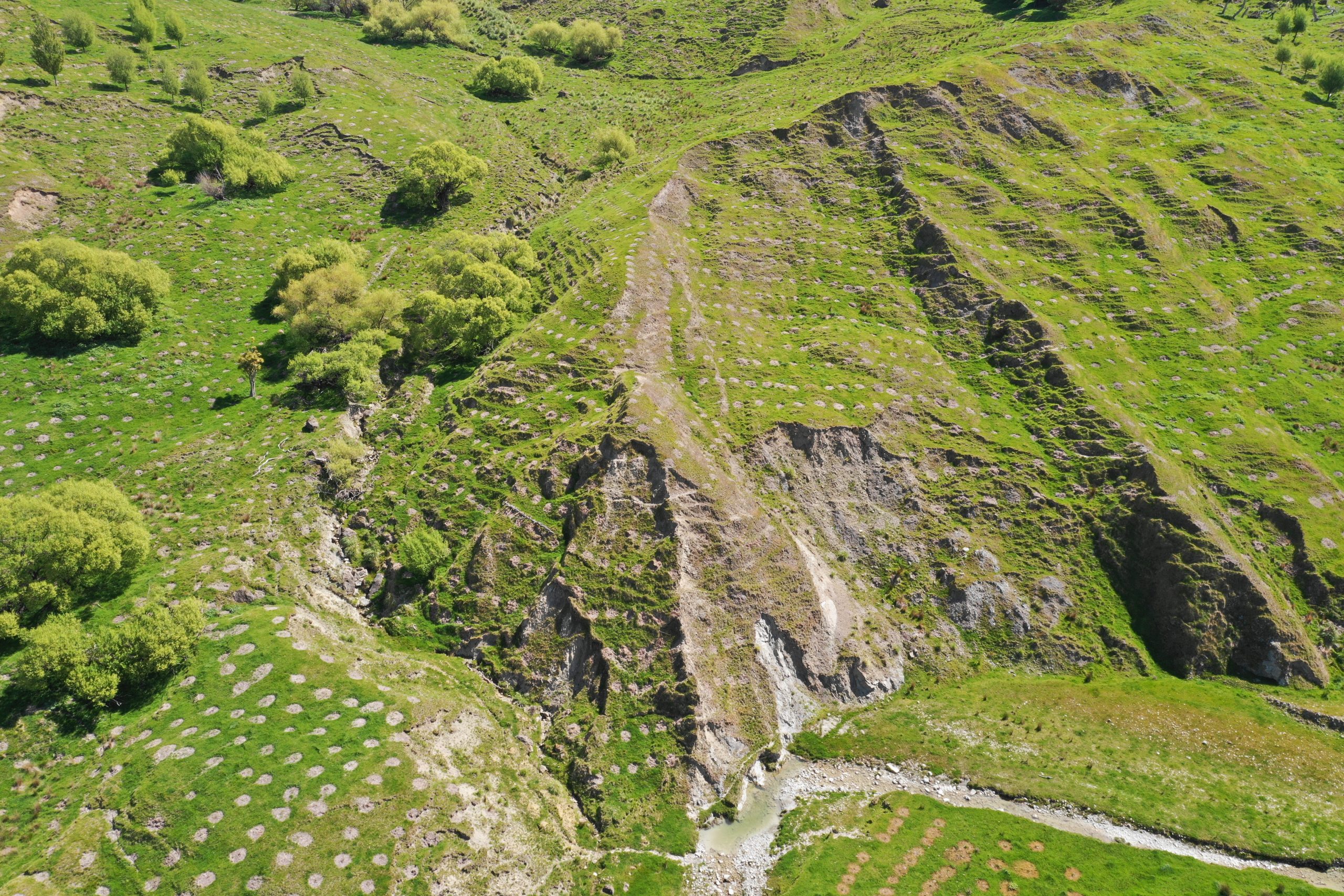 The problem is widely recognised and stabilisation with poplar and willow poles, as encouraged by several regional councils, is one way to slow down the progressive downslope movement. 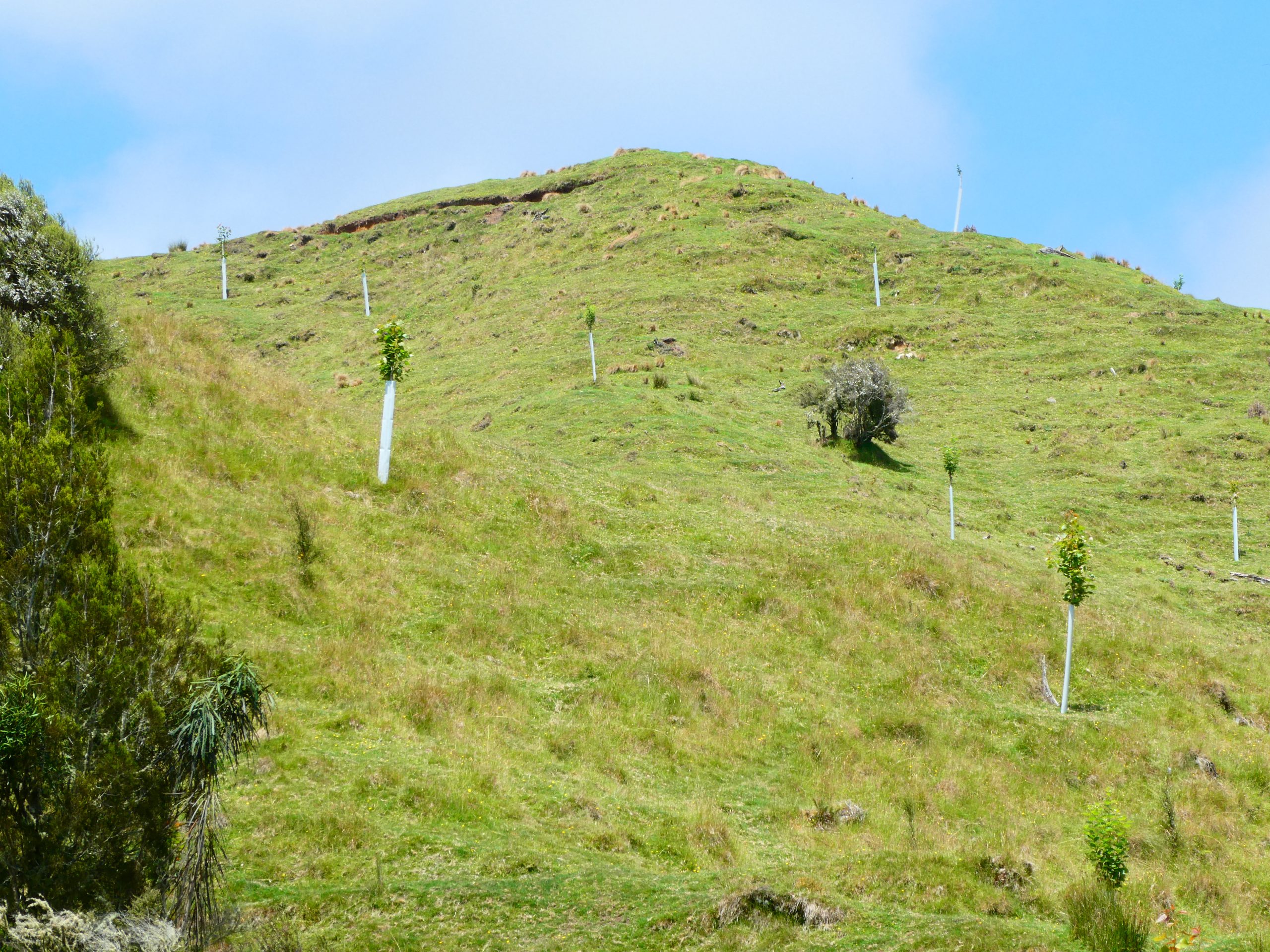 But there is a better way; here we see natural regeneration of mānuka on those same slopes, healing the land, providing a nursery for native trees to thrive, slowing down runoff and eventually allowing the full range of tree species to thrive. 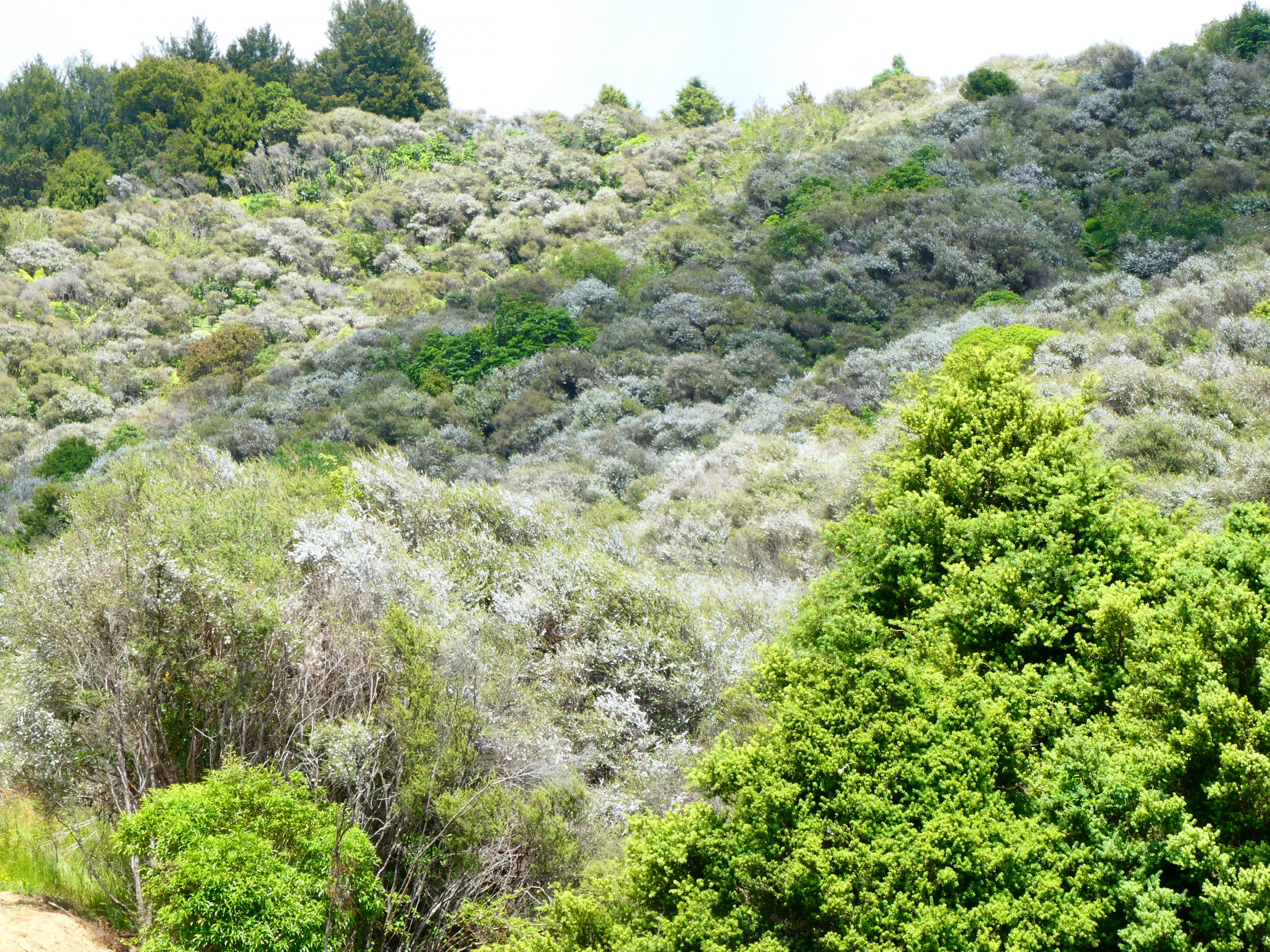 And this is the result of natural succession on those same slopes, healed hillslope providing the full range of ecosystem services for flood control, soil stabilisation, biodiversity, and massive carbon storage. 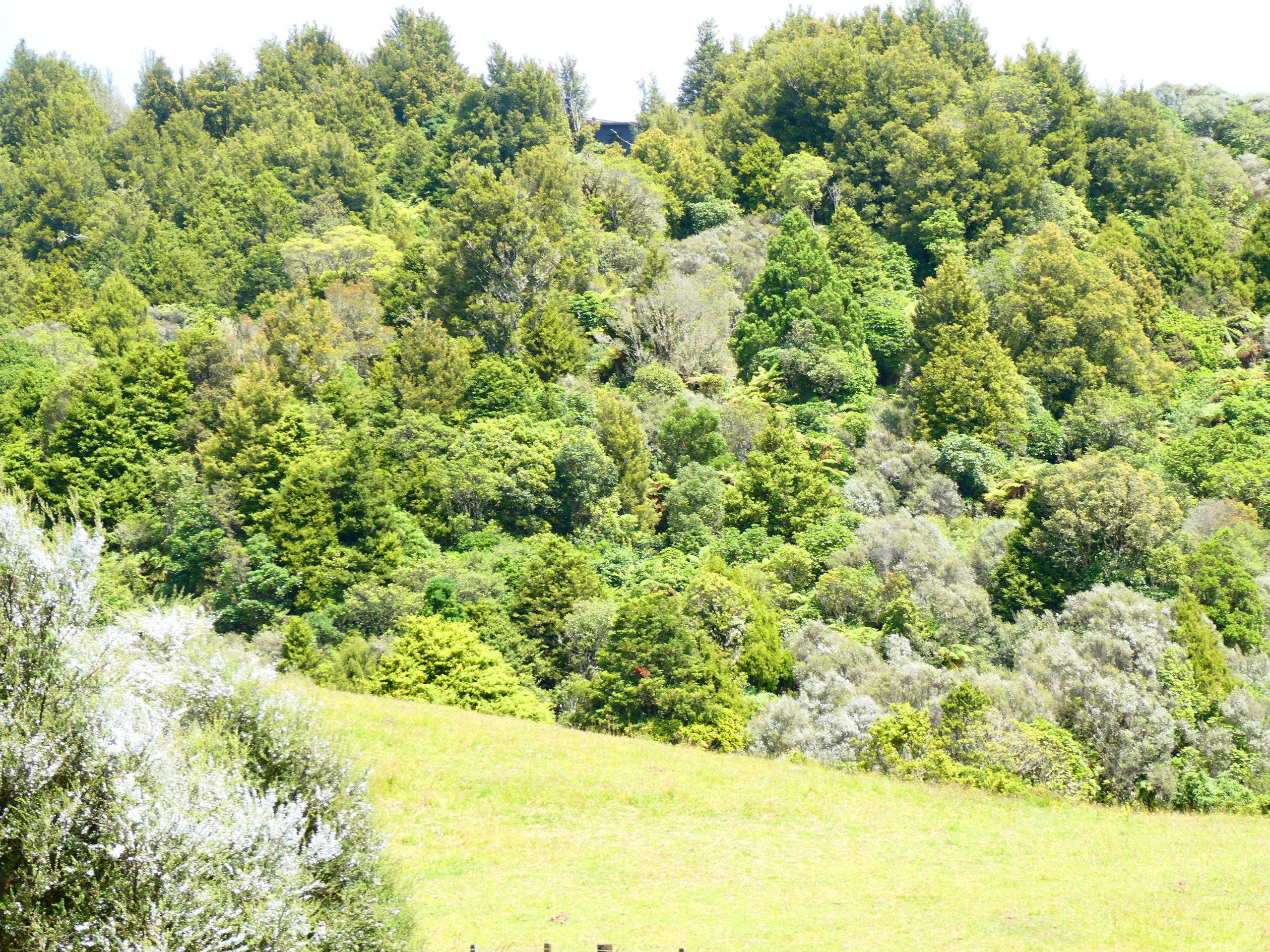 While the image shows what a healthy hillslope in New Zealand could look like, attempts to accelerate the process by planting and management are being applied. The mānuka honey boom has inadvertently created an opportunity for these hillslopes to be clothed again, from which, given neighbouring seed trees, native forest species will arrive.

But the reclothing of our eroding hills becomes urgent as we enter uncertain times with climate change bringing higher intensity rainfall to some of these areas and the slow depletion of soil mass makes it harder and harder to force the growth of grass.

A related, but essentially similar need, is to wrap native forest around the headwaters of all our streams. These two issues go hand in hand, and we need to realise that the health of our lowlands depends on the health of our uplands for soil stability and for water quality.

The problem of soil erosion has many parallels and connections with the whole climate change issue. A slow creep finally catching up with our ability to both comprehend and act.

”It would be so much better to have our hills clothed in native forest.

Does that ring some bells with our response to the totality of the climate change problem?

But serendipitously they can also be connected in a way that has a multitude of positive outcomes. As it becomes obvious that much of this eroding hill country becomes less and less productive in the traditional agronomic sense, it presents a splendid opportunity to provide one of the carbon sinks advocated by the Climate Change Commission.

Planting these slopes in trees which return the ecosystem services that these hillsides evolved into over millions of years has innumerable benefits – in soil stability, water retention and purity, biodiversity, carbon capture and landscape values. It would be so much better to have our hills clothed in native forest.

The O TātouNgāhere (Our Forest) body of work forms the basis of a plea to return at least a portion of our hill country into native forest. It is a big ask and demands that we agree to value our long-term wealth and even survival. There has been a massive retreat of farming from some of our hill country, especially when stock subsidies were removed, and acknowledging the need to remove significant carbon from the atmosphere in the long term we will need to again identify where we can site the extensive forest plantings advocated by the various environmental groups including Tāne’s Tree Trust and the Climate Change Commission.