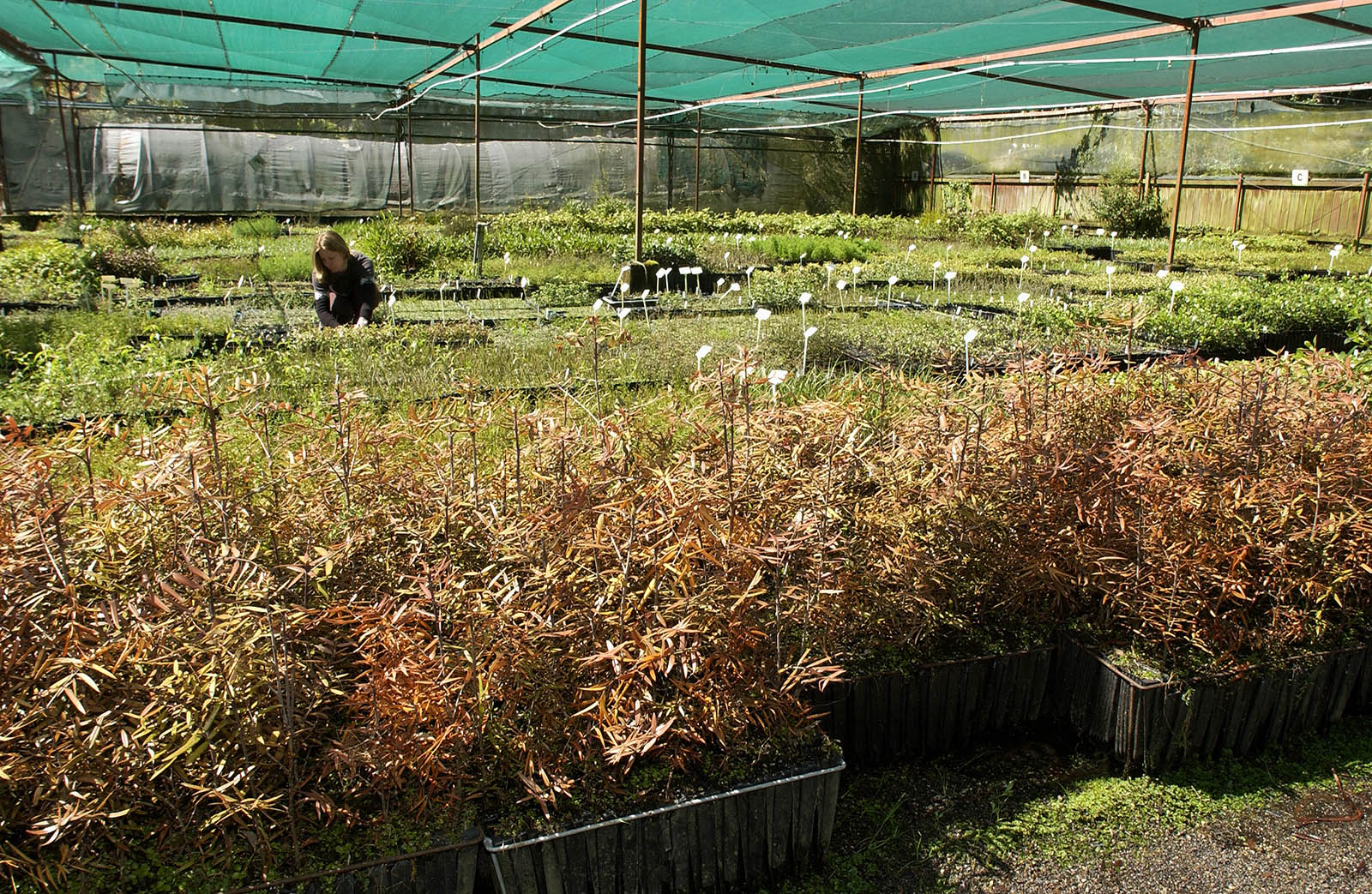 Raising native trees – do cuttings have an edge?

It is encouraging to see the Crown Research Institute Scion applying greater resources to research into our native tree species, which may eventually contribute to their more widespread establishment for both production and environmental restoration. A major impediment to establishment of native forest is of course cost.

Depending on the site and objectives of planting, estimates (costs) can be up to $20,000 per ha to carry seedlings through to closed canopy stands free of weed competition. These costs are around 10 times that for planting pines (e.g. Davis et al. 2009). While comparison with the radiata pine industry is not necessarily that helpful it is inevitable that the question is often asked. Why are natives so expensive to plant compared to radiata, and especially why do nursery-raised seedlings of our major native shrub and tree species cost $3-4 per plant vs 30-40 cents per plant for pines?

Well quite simply we are looking at two very different land use options in terms of scale, infrastructure, ecology of the species, silviculture, the objectives of planting…. and the list goes on. Unlike the radiata pine  industry and the huge history of well-funded research into turning this species into a genetic and silvicultural super tree, the native forestry industry has had a relatively low input of research and is of a vastly different scale, and is not driven by the commercial investment required for our third biggest export earner.

In addition, establishing native scrubland and forestry involves multiple species which are naturally slower growing than pines and where succession planting is required for most sites to provide a nurse cover of shrub hardwoods as essential shelter for inter-planting of later-successional tree species – a very different scenario from the monocultures of industrialised production pine forestry. And with the increasing requirements of eco-sourcing, this effectively means that native plant nurseries need to raise several provenances of each species if they are supplying stock to different regions.

When it comes to natives, planting programmes are often small and scattered covering a range of sites to meet multiple objectives; the planting is often undertaken by communities, iwi and landowners voluntarily, not just contract planters; and each nursery produces plants in a variety of species, in a range of sizes, grades and container types to meet the diverse demands of multiple small growers. This is in stark contrast to large scale radiata forestry, which revolves around massive industrialised bare-root production.

Consequently, the native plant nursery industry is fragmented and small scale, and is often hamstrung by lack of forward planning of planting projects. We estimate that a significant proportion of the 10 million or more native trees and shrubs that are raised annually are grown on ‘spec’ due to lack of forward orders. All these factors contribute to the high cost of native plants, which is just one of several components adding to the cost of establishing native forest. 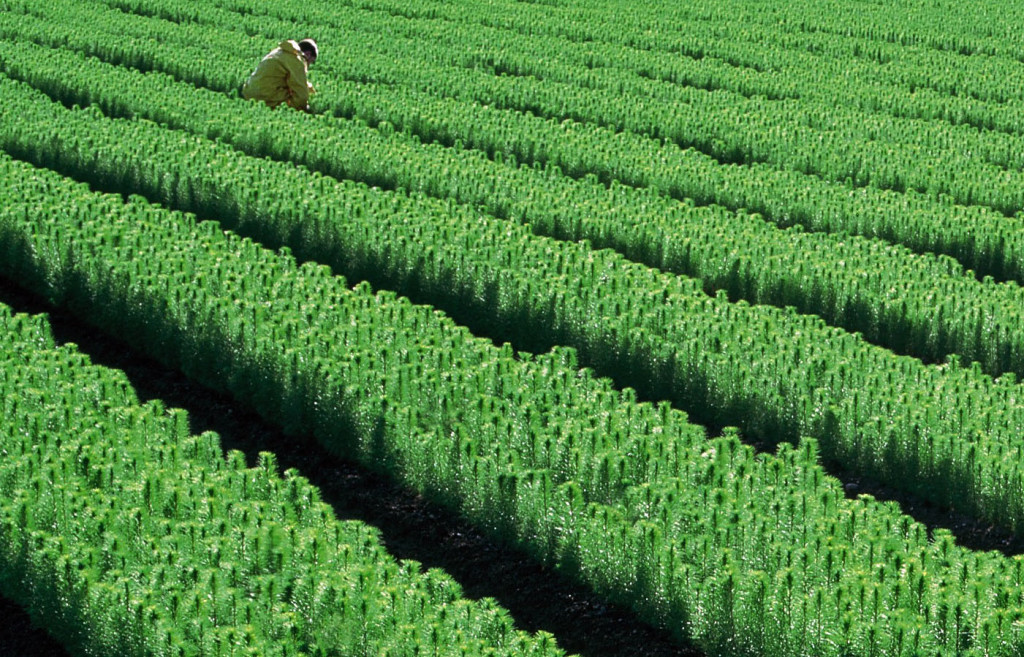 Highly mechanised radiata pine nurseries produce tens of millions at a fraction of the cost. Attempts at substantially reducing the cost of large scale production of natives from cuttings is not new and has yet to be demonstrated. ©Jonathan Barran Photography

There have been many attempts at trying to reduce the cost of native plants by improving technology, automation, etc. This has included the need to provide a reliable source of seed for raising seedlings or looking to other propagation methods such as cuttings. So it is with some interest that Scion has recently indicated “a scientific breakthrough” in the propagation of our native forest trees (article by Jamie Morton, The NZ Herald, 2nd September 2016). While the press release is limited in detail, some claims may require a degree of caution such as the statement that producing natives from cutting is new technology. It should be noted that plants derived from cuttings for two of our most important forest species – totara and rimu – as quoted in the article, have in fact been developed decades previously.

For totara, former senior nursery propagator Trevor Faulds at the Forest Research Institute Nursery (now the Scion Nursery) indicated that “totara has also been raised successfully from cuttings, readily forming roots even where live stem and leaf material has been taken from very old trees” (T. Faulds pers. comm. in Bergin 2000). For rimu, trials undertaken over 40 years ago involving taking cuttings from nursery plants “show that rimu can be propagated successfully from terminal cuttings” (Dakin 1974).  While the technology of cuttings may show promise for erratically seeding species such as rimu and tanekaha, it offers little advantage for species such as totara and kahikatea which seed abundantly in most years and produce adequate quantities of seed every year. Although rimu does have spectacularly heavy seed years – the most recent in 2015 – interspersed with years of lesser seed abundance there is opportunity to collect at least modest quantities of seed in most years.

In good seed years very large quantities of seed can be easily collected and many thousands of germinated rimu seedlings – using a starvation technique – can be easily and cheaply held over in trays for pricking out and growing on in subsequent years when seed is less abundant and less easily collected (Diane Coleman, Treeline Native Nursery, pers comm.). Totara can also be held over for at least four years using the same technique (ibid.). The routine use of cuttings to propagate seedlings of native podocarps is unlikely to result in faster growth in the nursery and may even necessitate extra time in the nursery to get some species up to acceptable planting-out condition and size (ibid.).

As with radiata pine, plants from cuttings are expensive to produce and are used to clone trees from scarce seed stocks from genetically superior trees with improved growth and good form (Maclaren 1993). The case for cuttings for selected native tree species may change once genetically improved trees are identified and available for cloning, but this is still some way off (many years at best), and will require the controlled pollination of superior trees to produce genetically improved plants.

Cuttings from seedlings raised from “one of the finest examples of mature podocarp forests left in the country” may or may not offer some gains as tree form is highly likely to have been influenced by the growing environment as much as by any genetic basis, but the cost is likely to be high compared with plants raised from seed. It seems large numbers of fast growing plants produced at a reasonable cost based on cutting technology is an aspiration rather than a reality.

While we applaud an apparent increased focus on native species by Scion, we are acutely aware how damaging failures at a forest level can be and urge caution in the planning of large scale planting of these species until there is greater awareness of the costs and performance for any particular site.

A project funded by the Tindall Foundation, and managed by Tane’s Tree Trust, “Our Forests Our Future”, aims to establish demonstration plantation plantings of selected native species using best current practice while clarifying the real costs and management options. This project aims to get us walking before we run, avoiding the negative impacts of large scale failures.

Dr Hoskings & Dr Bergin would like to thank Dr John Herbert for his contribution to this piece. Dr Herbert worked for 34 years as a researcher in native forest ecology, natural resource management and indigenous silviculture with the NZ Forest Reseach Institute. For the past 16 years he has undertaken programmes to rehabilitate pasture and plantation forest sites to indigenous scrubland and forest.