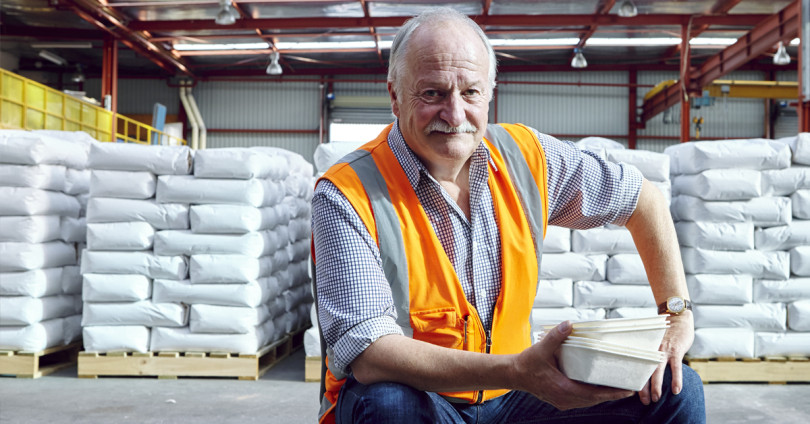 Britain’s famous Glastonbury Festival has influenced everything from green politics to dance music to the rise of Ed Sheeran. Less well-known, though, is the role it played in prompting Aucklander Richard Williams to embark on a quest to make takeaway packaging from potatoes.

Richard, a former Army aircraft engineer, and his friends were friends with Glastonbury founder Mike Eavis back in the 1990s. A prize winning dairy farmer, Mike complained after festivals that his cows were developing stomach problems from eating takeaway cups and trays thrown into the fields by revellers.

He asked Toby and Richard to come up with a compostable alternative that wouldn’t cost him a fortune in vets’ bills or landfill charges.

Never one to turn down a challenge, Richard has spent the last 16 years perfecting a process to turn waste from potato chips into biodegradable packaging.

“Environmental issues weren’t talked about as much back in those days – you were considered a bit of a touchy-feely treehugger,” says Richard.

“But I enjoy a challenge, and I’ve always been passionate about the environment.

“Most people would have given up somewhere along the way, but I was determined to finish it.”

Bioproducts like Richard’s potato packaging have been identified by Pure Advantage as one of seven key areas with the potential to grow New Zealand’s economy without damaging our natural environment.

Pure Advantage, which was set up by business leaders to challenge Kiwis to build businesses to use natural resources in a sustainable way, hopes more innovators will seize opportunities to create eco-friendly products that create wealth and skilled jobs for New Zealand.

For Richard, inventing spud-based packaging turned out to be a big ask. The packaging had to be food-safe, microwavable and waterproof, and had to be able to be safely returned to the earth after use – unlike polystyrene, which is oil-based, toxic and non-biodegradable.

Richard continued his research and development when he moved to New Zealand 20 years ago. By 2001, he was able to start selling potato-based plates, trays and bowls, although he has continued innovating and problem-solving to try to improve his inventions ever since.

Richard’s packaging, which he markets under the Earthpac label, is based on potato starch, a waste product from the chip-making industry.

Starch granules saturate the water after the potatoes as are cut into chips and chippies. Earthpac sources this waste starch from Bluebird and Griffin’s, mixes it with cellulose and water, heats the mixture and cooks it into the required shapes in moulds.

Recycling the potato starch saves it from having to be flushed down the drain, which is hugely water-intensive.

The manufacturing process produces no harmful fumes or liquid waste, while the small amount of solid waste created is given to eco-stock to be made into cattle cake. After the packaging has been used, it can go into the compost or a worm farm.

Richard has spent the past three years developing injection-moulding machinery that automates production of meat trays, which are in great demand here and in Australia. When the meat trays are into full production he will be working on developing aircraft trays and takeaway cups.

While the continuous research and development has often been exhausting – Richard typically works 10 or 12-hour days – he has never considered giving up.

“The thing about doing something no-one has done before is that there’s no-one you can go to for help. You can’t find a book to help you, or Google it,” says Richard.

Patents are pending for the design process that Richard has developed.

“But the potential is huge. There are 150 million takeaway cups going into landfill each year in New Zealand, and we use five million polystyrene trays a week. It isn’t easy to change habits that have been created over decades, but we have to start finding alternatives.”

There is a single customer in Australia that already requires 200 million units a year!