The second in a series of profiles of New Zealand business leaders utilising technological solutions for a zero-emission future, Pure Advantage and Westpac highlight business leaders taking that leap and look into what it might take to finance the transition as well as the resultant opportunities of a Net Zero NZ.

Andy Booth didn’t pull any punches when a recent court decision went against Solarcity, his Nelson-based renewable energy provider. In June, the High Court ruled out Solarcity’s legal challenge to lines company Unison’s imposition of an extra fee for some Unison households with rooftop solar.

“Unison is discriminating against its smartest, most energy-aware customers,” argued the Solarcity founder and CEO, in a statement that described the charge as a solar tax. “But these kinds of approaches by monopolies to stop solar won’t work.”

Several months later, and Booth is sticking to the fighting talk. Yes, Unison’s move has made some homeowners uncertain about the economics of going solar. But long term, mass uptake by New Zealanders is inevitable, he suggests. “And when it comes, it will happen very quickly.”

If he’s proved right, then Solarcity will have likely played an important role in that transformation. Launched eight years ago, the CarboNZero-accredited company aims to accelerate the shift to solar by removing the biggest obstacle for most homeowners: upfront costs. Solarcity’s customers pay nothing for the panels, installation or maintenance. Instead, they buy the power – ‘solar as a service’ – paying a fixed, inflation-free monthly fee, plus “mates rates” for any supplementary grid electricity.

Unusually in an age of easy commitments, the contract is for 20 years, a feature seized on by rivals – what happens if you move house? – but which Booth touts as a virtue, a way to beat the rising cost of power. (As for what happens if you sell and the new owners don’t want solar, you simply take it with you.)

“To stop climate change requires an inter-generational commitment,” he says of the long-term contracts. “What this scheme does is allow you to save the planet, and to save cash.”

It’s the kind of pragmatic solution to big issues that Booth has favoured since he was on the international board of Greenpeace. In Europe in the early 1990s, he co-founded World Television, with the aim of keeping environmental on the political agenda.

Solarcity’s approach, designed in collaboration with Westpac and backed by Sir Stephen Tindall’s K1W1 fund and Pencarrow, is modelled on US ventures and intended to be independent of political and commercial whims.

Clearly, however, it’s not impervious to industry resistance. Booth acknowledges that the electricity grid has mostly served us well. But the model isn’t suited to current challenges.

“Most lines companies and incumbent regulators don’t have a mandate around climate change,” he says. “The Electricity Authority’s job is to deliver power as safely and economically as it can, with no mandate to hit that 100 percent renewables target. There’s a complete disconnect between the industry and clean tech, right at the heart of the energy industry.” 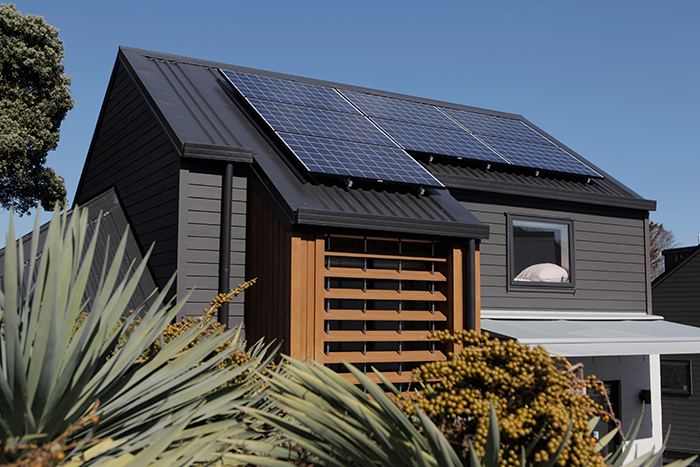 “It’s foolish to stop innovation and new technology,” he adds, drawing a parallel to the telecommunications industry’s recent history. “This is important to the economics of the nation. If you aren’t able to find and use cheaper power in the future, you become incredibly less competitive.”

Still, he’s an optimist. As the price of battery technology collapses, he predicts that New Zealanders will adopt solar plus storage for the bulk of their energy needs. (Solarcity recently added battery storage to its service options.) The immediate goal, however, is to install 200,000 systems in five years.

“If we can achieve that, then essentially New Zealand will become 100 percent renewable; we won’t need [the coal-and-gas fired station] Huntly anymore,” he says. “We can trigger a fundamental change in the way our nation generates power.”