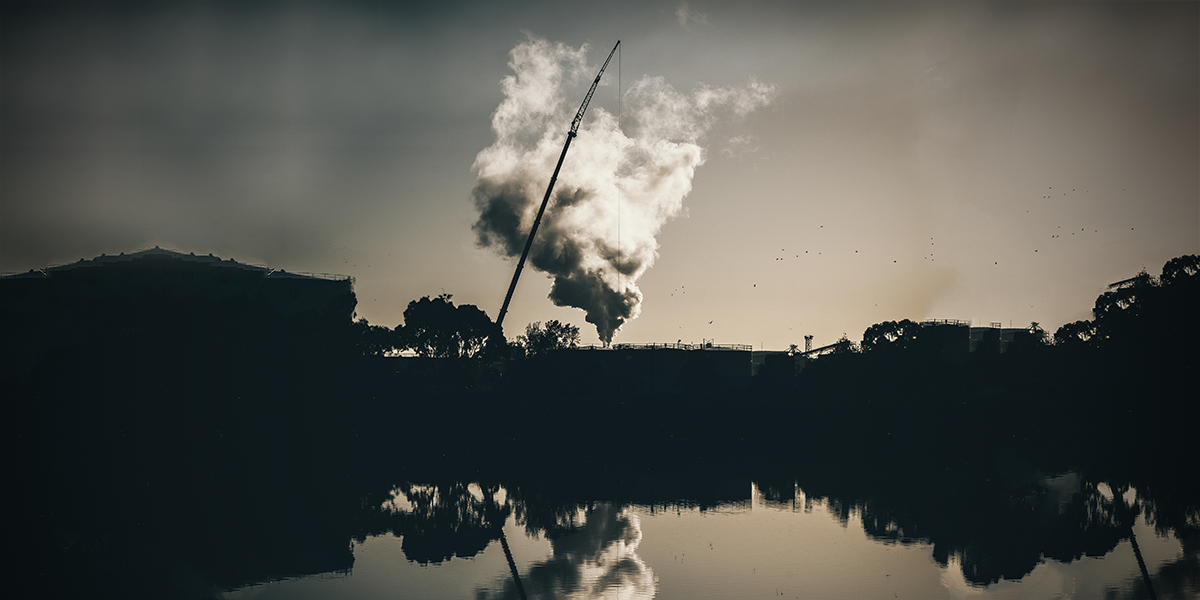 Net Zero and beyond: fostering Kiwi wellbeing across the Six Capitals in a low carbon future

The biggest difference in the 2017 election campaign compared with past elections was the effect of widespread public concern about poverty and the environment. They became upfront campaign issues for all the leading parties. This unprecedented shift puts the new government under pressure to deliver material change to communities around the country.

We have for the first time a broad political consensus on the desired outcomes.

Much political debate is focused on the HOW – the suite of policies, actions, actors and indicators to achieve the agreed outcomes. Often these are already clearly defined by many credible local and international sources – but somehow, we never consistently focus on doing them: despite the many social and environmental successes of businesses, iwi, government bodies and nonprofits, the gravitational pull is towards business as usual.

The definition of insanity is doing the same thing over and over again and expecting different results.
– Albert Einstein

What would it take to support us to do things differently and do different things?

What’s missing is the WHY: a why that goes deeper than the warm and fuzzy “WHAT” outcome statements. It’s a WHY that inspires and sustains the long-term commitment by all players that we need to stay together and stay on track.

Without a credible WHY, the HOW is continually re-litigated, the energy fizzles out, the community contract is broken once more and the collective impetus towards the WHAT falters and eventually falls away to a set of worthy but disconnected initiatives.

Where’s the WHY that New Zealand can seize while the new government is still alive to the hot election issues? A uniting WHY that harnesses the collective impetus “to do better” and sustains the HOW for the long haul?

This was a deeply ambivalent election result – I don’t mean divided, but there’s a deep ambivalence there. Yep, we’re doing okay in a lot of ways – there’s not a desire for huge radical change; but there is a desire for, a strong feeling, that we can do better.
– NBR political editor Rob Hosking on Sunday Morning (at 16’30”)

Why? THEN Who, What, Where, When and How.

What we measure counts. What’s out there to measure what counts for everyone along the ambivalence spectrum?

In this article, I argue that two simple, unifying concepts can do the trick.

Firstly, the Six Capitals provide a framework for measuring the things that Kiwis value in a way that meets the goals of the different groups that make up New Zealand society. It’s a framework that is now widely used by business, can yield meaningful measures for communities and should be reported on in a set of national accounts by governments.

Secondly, carbon exponentially outclasses GDP as a synthesising indicator. Together with other GHGs it’s a proxy indicator of waste: a single indicator that indirectly measures lots of other things. Everything we do or use has a carbon cost. Carbon accounting shows us where our use of resources of all kinds is needlessly costly, and how we can run a smarter, more productive and less wasteful economy.

Yes, it’s true. Climate change is not the enemy and carbon is our friend. 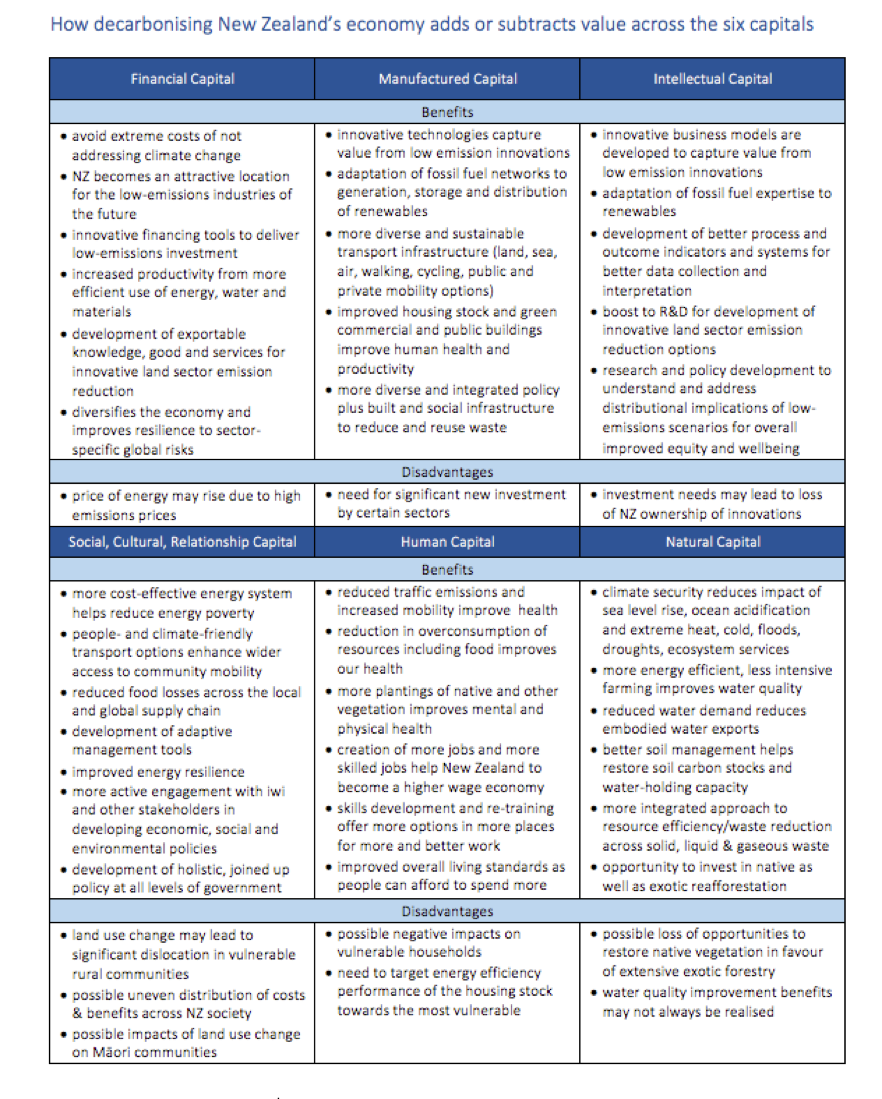 Climate change was among the environmental issues of concern canvassed in the elections.

But would tackling climate change also help address the high level of public concern around poverty and pollution while maintaining economic momentum? And if so, would look at the outcomes – the WHAT – across the Six Capitals give a range of WHYs big enough for the many constituencies of New Zealand Inc to plan and carry out a sustained and concerted HOW, the necessary and sustained action to make a difference?

I think so. Others agree.

“This changes everything”. That’s the conclusion Naomi Klein came to: she sees climate change as the biggest and most exciting opportunity facing us all right now.

Enter Net Zero in New Zealand. I’ll summarise my response to the report and what it means for Kiwis to embrace it, by showing how it can help New Zealand Inc do better across all six capitals. This will enable everyone in New Zealand to identify a range of WHYs that will sustain their commitment to change.

Environmental and economic risks…, in particular around failure of climate-change adaptation, water crises and unemployment and underemployment reflect… concern about how little tangible action has been taken to address them.
– World Economic Forum Global Risks 2015, p1

The report from Vivid Economics on getting to domestic emissions neutrality by the end of this century sets out several HOWs to achieve the WHAT to which we and 167 other nations have committed.

I’ve summarised Vivid’s report here. It notes that “the world has committed to a low-emissions future.” It then analyses three scenarios which I’ve bracketed by two other options from the report that describe New Zealand’s possible choices with respect to the ratified Net Zero Goal:

Let’s look at Option 2 – the combination of Scenarios 2 and 3. Why? Because it’s what New Zealand citizens and business leaders want, as reflected in the election debate and also as overwhelmingly shown in Pure Advantage’s Climate Survey of one thousand New Zealanders.

A credible WHY measured across the Six Capitals

Whether you take the 1984 election or the 2008 global financial crisis as a baseline, Election 2017 voters thought economic progress as measured by GDP has come at the expense of people and the environment.

The historically unspoken trade-off between increasing export earnings by intensifying farming at the cost of reduced stream flows and water quality has become a focus of community outrage. This at the same time as tourism, our second-biggest income earner, finds itself competing with primary producers for our natural environment while also degrading it.

Vivid’s report was explicitly intended “to starkly illuminate [such] key strategic issues and trade-offs“ associated with our decisions about how to meet our Paris obligations, such as the effects of:

Insurance actuaries (the planet’s best mathematicians) and economists, as well as the Paris Agreement signatory nations, know that decarbonising the economy aims to avoid the extreme costs of not addressing climate change now. The Vivid Report also notes a suite of benefits by directly addressing it.

In the summary table below, I’ve taken some of the benefits of decarbonising New Zealand’s economy from the Vivid Report and other sources and shown how they can add, and in some cases, subtract value across the Six Capitals.

In real life, any action to improve any one of the capitals will also benefit many of the others, so the benefits and disadvantages will need to be analysed for each action.

Only then will the full, rich picture emerge of how our decisions affect our entire society, economy and ecology, allowing transparent analysis and informed discussion of our Net Zero pathways.

This kind of analysis helps us assess progress towards achieving the UN Sustainable Development Goals to which New Zealand has signed up, and enables the use of indicators aligned with any given macroeconomic theory including the circular economy, doughnut economics and ecological economics, as well as particular goals such as zero waste.

Of course, we can! New Zealand is an innovation hot-house. We’re already exporting breakthrough technologies all around the world. We’ve been the global petri dish in which Apple, Samsung, Google and various financial institutions around the world test their new ideas. We are small, adaptable and creative. We can lead the way with climate change innovation and export our knowledge.

Vivid Economics note that uncertainty about the rate of change in emission reduction options technologies that are not yet available, proven or affordable may affect the willingness of public and private sector decision-makers to commit to bold change.

Habit is habit, and not to be flung out the window, but coaxed downstairs one step at a time.
– Mark Twain

That said, the Royal Society’s report on the Transition to a Low-Carbon Economy has already noted that many of the first steps we can take are well known, well-proven and mostly uncontroversial.

Transparently documenting the pros and cons of net-zero options across the six capitals will allow people who are ambivalent and from across the spectrum to adjust to and be part of the changes we need to make for the global carbon imperative.

See? Climate change is not the enemy – and carbon is our friend!