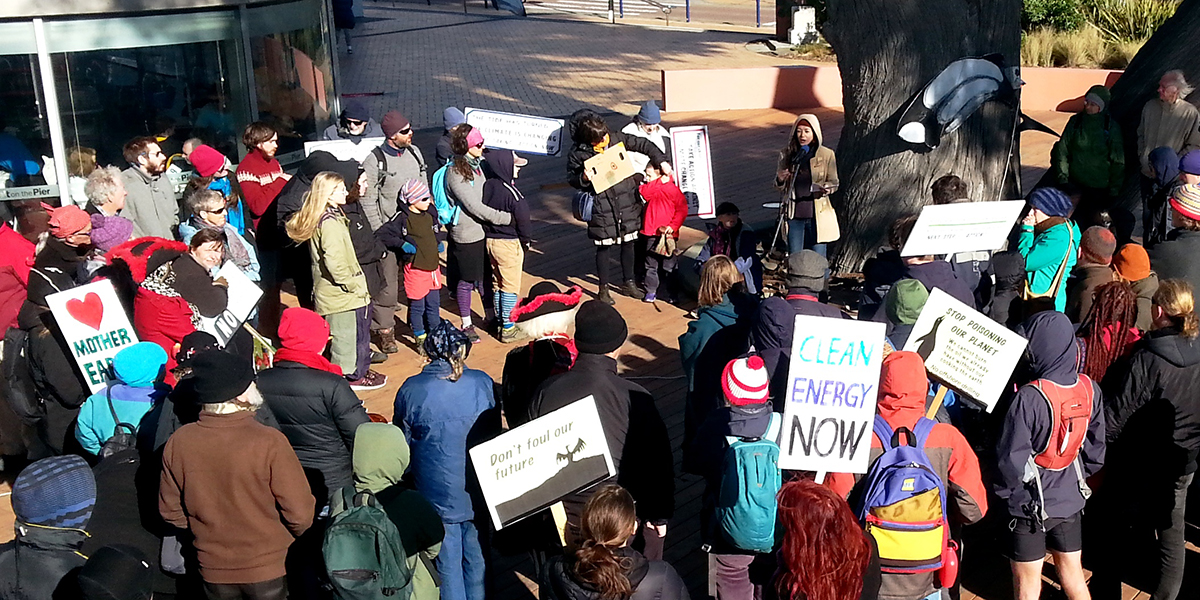 What now after Net Zero report? New Zealand’s climate leadership conundrum: is staving off the climate crisis really a crisis of leadership at both local and central government levels?

In any global disaster, is there an obvious point in time when society most desperately needs leadership? Is it the day before doomsday? Minutes before? Or once the disaster is already in full swing? In an ideal world, of course, leaders would step up and lead as soon as it is known a crisis is looming. In our past, we’ve arguably had valid excuses for not being adequately prepared for the totally unexpected natural disasters which catch our planning off-guard. But our present day knowledge, through science and technological advances, allows us to look much further into the future, and we know that when it comes to climate disruption, we have the ability, albeit in this short window of time, to stave off the worst of its consequences for humanity. I’m pondering this because when it comes to climate change action, I’m sitting at local government level and I’m straining to hear any sirens.

The World Meteorological Society now describes our earth as being in truly uncharted territory. Let’s not beat around the bush. Climate change will completely disrupt our world as we know it. And this isn’t some hypothetical future prediction – it’s already catching us both ill-prepared and vulnerable. The United Nations, just last week, declared the East African famine currently devastating millions of people in Kenya, Somalia and Ethiopia, as the worst humanitarian disaster in modern history. And the urgency for action is growing by the day. The latest call to action is Mission 2020, a set of six milestones set out by a panel of experts convened by Christiana Figueres the former Executive Secretary of the United Nations Framework Convention on Climate Change. Mission 2020 aims to urge countries to adopt and implement these six milestones which cover energy, industry, transport, land use, finance and infrastructure, in order to meet global targets to avoid the worst effects of climate change. The report pinpoints the year 2020 as the deadline by which we must hit peak carbon emissions or, it warns, face nothing short of a calamity. Our window for ‘saving’ our climate has effectively been narrowed, to less than 3 years.

If the message is not yet clear, it’s that governments need to act fast. Our globe’s best shot at progress to date has been the Paris Climate Agreement, which the NZ government signed in 2015. Unfortunately, leadership and urgency have been lacking (and at the international level, it’s been pointed out as such), as our government’s commitment to reduce greenhouse gas emissions by 30 per cent below 2005 levels by 2030 is woefully insufficient to meet our Paris commitment. In addition, we continue to offer up swathes of our ocean and land for oil and gas exploration, at a time when we know the world cannot afford to burn even our known fossil fuel reserves. The Government’s freshly announced budget of $4 million for climate change over four years to progress our nation’s ‘climate change work programme’ is an embarrassing pittance, highlighting the fact that leadership by central government continues to be at best misguided and sluggish, at worst, wilfully negligent.

The one shining light of leadership from Parliament has been the Vivid Economics’ Net Zero in NZ report commissioned by Globe NZ – a cross-party alliance of 35 MP’s from across the political spectrum. It sets out different scenarios which will drive large-scale emission reductions such as moving us towards 100% renewable energy, the substantial electrification of our national vehicle fleet and sweeping land use change from pastoral agriculture to forestry with a rather drastic drop (up to 30% decrease from current levels) in our dairy, sheep and beef herds. The report concludes that “… it is possible for New Zealand to move onto a pathway consistent with domestic net zero emissions in the second half of the century, but only if it alters land use patterns”.  The takeaway message outlines that if we’re serious about keeping global warming to under a 1.5 degree limit then the ‘Net Zero 2050’ option, which combines both Innovative NZ and Resourceful NZ scenarios is our clearest pathway to ensure NZ’s net domestic GHG emissions are close to net zero by 2050.

So, we have for the first time some architecture to guide policy debate and decision-making at central government level, but when it comes to the ‘doing’–actually putting in place measures to reduce emissions–can we really rely solely on central government? What could local government’s role look like in effective climate mitigation measures? 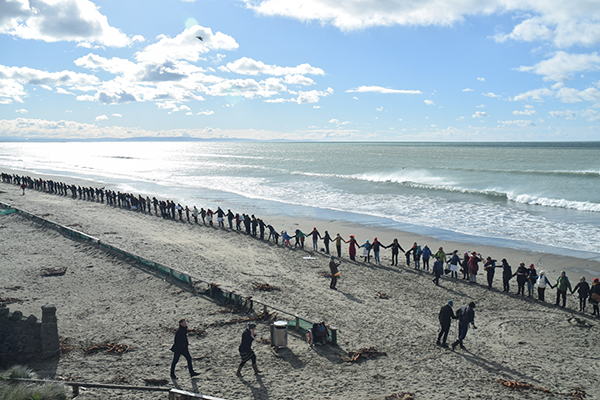 Hundreds gathered at New Brighton Beach in Christchurch on May 20th to participate in Oil Free Otautahi’s event ‘Hands Across the Sand’ where citizens stand together to protest the government’s continued Block Offers for oil and gas exploration. Photo credit: Oil Free Otautahi

Local government is currently limited to climate ‘adaptation’ under the Resource Management Act. Considering the necessity and urgency for broad scale change, this limitation to my mind, looks increasingly short-sighted and insufficient, as emissions reductions must be well-planned, staged, clear pathways that set timeframes in which local communities can adapt. Couple that with the vast biogeographical and geological differences, both between and within, our regions and a singularly rolled out central government mitigation policy appears less and less convincing. Local government also functions under the Local Government Act, which requires that in taking a sustainable development approach, a local authority should take into account the social, economic, and cultural interests of people and communities; the need to maintain and enhance the quality of the environment; and the reasonably foreseeable needs of future generations. At the moment, by being less than proactive in preventing the very real threats which climate change poses to both today’s communities and future generations, I believe local government is failing dismally to deliver on this part of our mandate.

So what could effective mitigation look like at a local government level? Mitigation would cross many council roles, from greater priority of public and active transport infrastructure and services to the roll out of electric vehicle charging infrastructure in towns and cities. For brevity’s sake, however, I’ll focus on the elephant in the room, agriculture – which makes up 49% of New Zealand’s total emissions. Ironically it is also our sector which suffers most from an increasingly unpredictable and unstable climate. Regional councils could set livestock caps for catchments, capping stocking rates to a certain limit based on emissions calculations. The Net Zero NZ report highlights that studies have shown the de-intensification of farms can maintain or improve profitability and be an “effective strategy to mitigate potential profit losses”. Such a mitigation tool would also have flow on benefits to improving water quality from reduced nitrogen and pathogens entering our waterways.

Reducing on-farm emissions could be achieved through the use of OVERSEEER– a software tool already widely used in the agriculture sector. It estimates nutrient flows (from runoff and leaching) in farming systems but also has the ability to calculate farm level greenhouse gas emissions (such as methane from belching ruminants and nitrous oxide produced in the soil from urine patches or through the use of synthetic nitrogen fertiliser). This tool could be could be rolled out more widely and used to guide farmers towards farming practices that reduce emissions. Regional Councils could complement an effective national Emissions Trading Scheme which has an effective emissions tax that results in real incentives for forestry (both exotic and native), protecting remaining native bush areas, or retiring marginal land to native forest. This could be guided by councils offering planting plans and advice on the restoration of habitat for our dwindling native species, tailored to regenerate the unique biodiversity values present in a particular area. Such a regionally focused programme could also direct incentives towards our greatest asset, soil, encouraging farming practices which are known to sequester carbon through improving underground microbial communities and cropping and grazing practices. 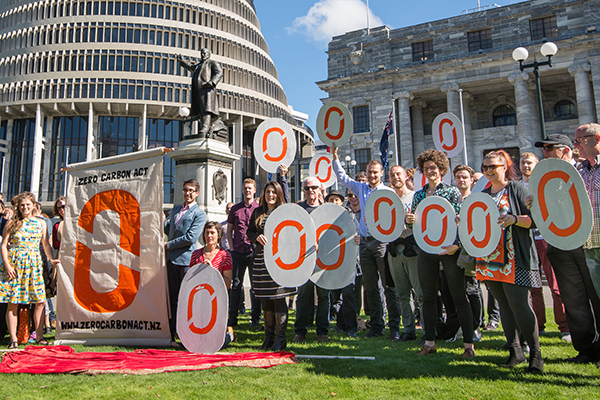 This is what leadership looks like. Generation Zero alongside concerned citizens and academics launched the ‘Zero Carbon Act’ at Parliament in April – NZ’s most coherent climate policy so far. Photo credit: Generation Zero

No matter what climate mitigation might look like, the report states the importance of a stable regulatory and policy environment in order to ensure investment delivery is low-cost and effective. This is where leadership is crucial. Currently, in the absence of leadership, citizens have stepped forward as leaders, to fill the vacuum. One young woman, Sarah Thomson is set to challenge Climate Minister Paula Bennett in the High Court next month for the government’s Paris targets being set at levels which are “unreasonable and irrational” considering the seriousness of the issue. Generation Zero is a youth-led organisation in New Zealand focused on transitioning society away from its dependency on fossil fuels and combating climate change. The Zero Carbon Act written by Generation Zero with the help of various experts and organisations is the most coherent policy we’ve got to date. The Act calls for legally binding emission targets using five-year carbon budgets based on a ‘Two Baskets Approach’ which separates short-lived (like methane) and long-lived (like carbon dioxide) greenhouse gases, and implements an effective ‘firewall’ on international carbon trading to ensure emissions reductions are taking place domestically. Importantly the Act also establishes an independent Climate Commission to provide expert advice and ultimately hold the government to account.

I believe the local government sector needs to pick up the Zero Carbon Act and run with it. We need to form a clear sector-wide view which calls for central government to mandate us to mitigate against the worst impending disaster in human history. We need to do this before the September election to ensure whatever government takes power has committed to effective climate policy and local government mitigation. Leadership on climate action is required at every level of government to prevent this global crisis from spiralling out of our control. Is it really beyond us to get this right? Must we be resigned to sluggish policy which results in too little, too late? Can we, dare I say it, lead?

For our leaders, be they local, national or global – climate change allows us to make decisions that will have benefits that cross our imagined economic, cultural, social and environmental divides. The spectre of climate change–both the breadth of the issue itself, and our response to it–blurs the lines between local and national decision making and the global consequences which may result. It allows us the opportunity to embrace a new way of thinking – to plan for a new world which thrives within planetary boundaries. Waiting to see the bat signal at two minutes to midnight seems to be the current strategy of central, and much of local, government. But I prefer to think urgent proactive leadership isn’t too much to ask of those of us who are elected by our communities and expected to be, well, leaders.