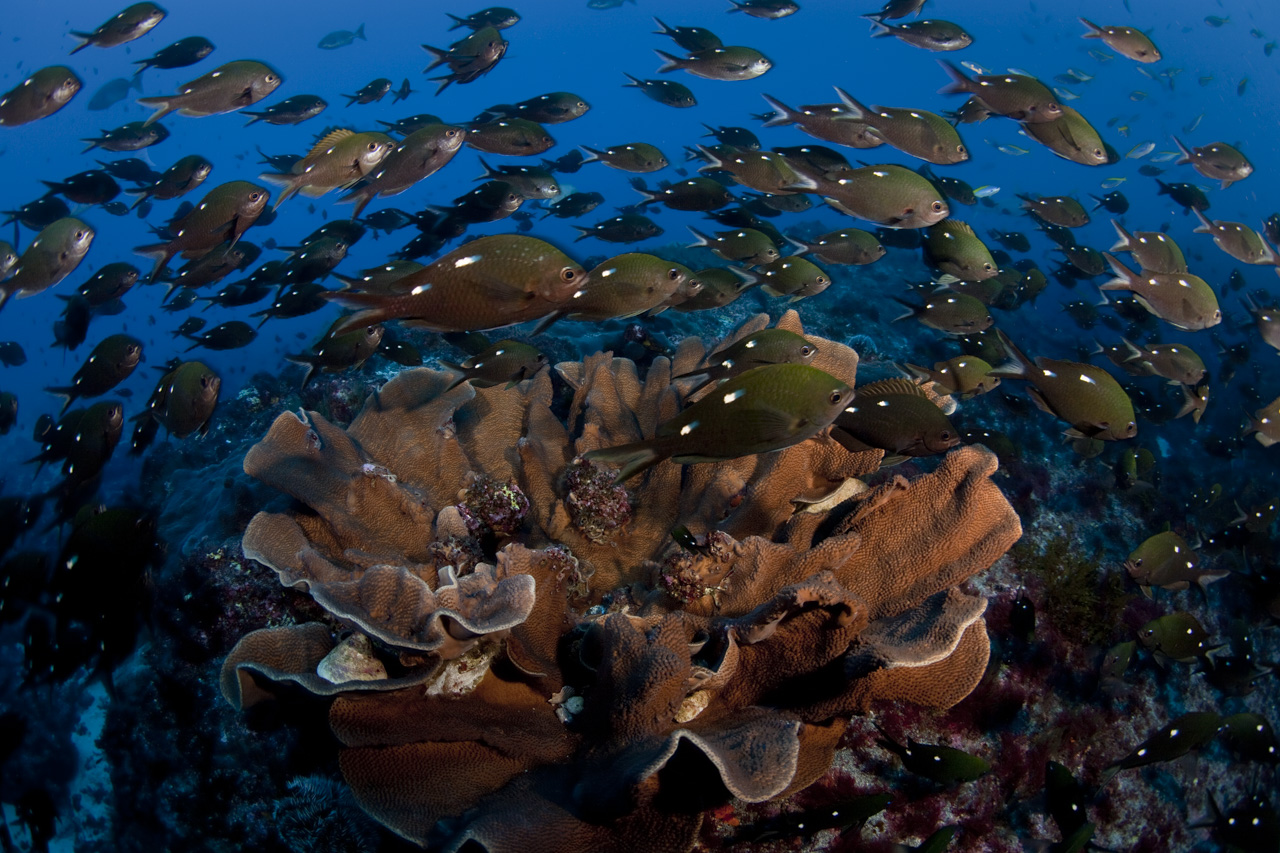 A backward roll from the tender and I am fully submerged, surrounded by bubbles. Within seconds the bubbles rise to the surface, and I look through the very clear water and I count: one, two, five, nine, twelve, fifteen … and more sharks appear. These are juvenile Galapagos sharks coming to investigate an intruder into a territory where they are the top predator. The sharks are joined by other top predators including kingfish and kahawai, all keen to see if the disturbance in the water is an opportunity for a meal.

This is the beginning of a typical dive at the Kermadec Islands, about 900 km north of the North Island and half way to Tonga. As I descend towards the reef, there are many species that are familiar to mainland New Zealand, but there are also Moorish idols, surgeonfish, cardinal fish and large spotted black grouper, plus there are corals and crown of thorns seastars, all of which are more typical of tropical waters. This is clearly a transition zone between the tropics and the temperate waters of northern New Zealand.

I have been very fortunate to have visited the Kermadec Islands four times over the last five years. In 2011 I led the Kermadec Biodiscovery Expedition with 12 other scientists, the largest coastal survey of marine environments ever undertaken at these remote islands. Fifteen new species of marine animals have so far been described, and more await description, and many other species were recorded at the islands for the first time. I made my most recent visit in November 2015, and the new species recorded continue to increase.

The existing Kermadec Islands Marine Reserve is currently the largest no-take reserve in New Zealand, which are a series of four rings of protection 12 nautical miles around the isolated island groups. In late 2015 the government announced the proposal to extend the protection zone to 200 nautical miles by October 2016 which, at 620,000 km2, would make the area of protection more than twice the land area of New Zealand and it will fully protect 15% of New Zealand’s Exclusive Economic Zone. This will be among the three largest marine reserves in the world.

The remote Kermadec Islands, too far for intensive fishing pressure even before establishment of the marine reserve, is an example of what we are missing out on in New Zealand, and almost everywhere else in the world. For these islands are among only a handful of places in the world where fishing has been at such low levels that they demonstrate how abundant fish used to be before fishing targeted the largest species in the most accessible areas. Most obvious is the frequent sight of large number of these top predators close to the reef: Galapagos sharks, kingfish, kahawai and spotted black grouper. And the next level down in the food chain – blue maomao, trevally and damselfish – can be so abundant that divers only 5m apart can lose sight of each other within these massive schools. From old accounts, coastal New Zealand was no different.

Speak to any fisherman that has been fishing for more than 50 years in New Zealand and they will recall easy capture of large, prized fish like hapuku from the shore, whereas they are now only found on deep offshore reefs. The first scuba divers in the early 1960s describe how easy it was to catch rock lobsters close to shore; all it took was a hessian sack and many, many lobsters could be guided in without resistance. This pattern is repeated for almost every desirable species.

After a marine reserve is established for some time, fisherman focus their efforts near the boundaries of the reserve – “fishing the line” – where they benefit from the spill-over of the increased biomass and size of fish from within the reserve. 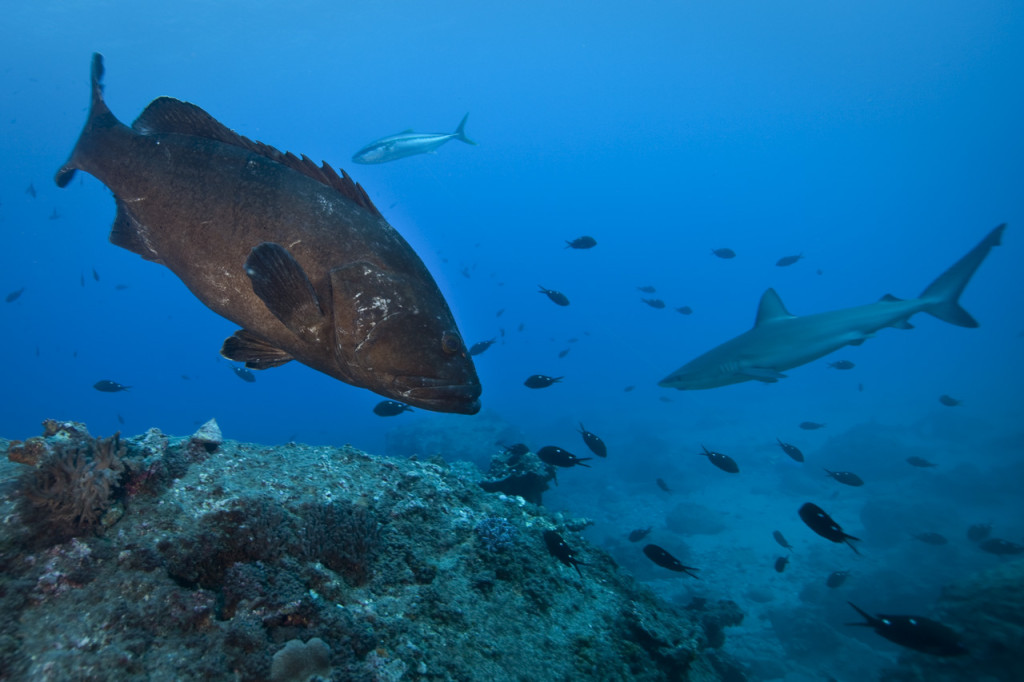 This confirms the immediate local effect of marine reserves however, until recently, the evidence for broader impact outside of reserves has been lacking. An elegant experiment on the Great Barrier Reef (GBR) confirmed that reserves do in fact make a disproportionate contribution to marine populations in a wide area, well beyond the reserve boundaries¹. The Great Barrier Reef has 30% of its area allocated to full marine protection in a patchwork, with the remaining areas available for varying levels of marine extraction (mostly for recreational and commercial fishing). The researchers based their study on two highly desirable species for fisherman: a coral trout and sweet lip. By genetically characterising individuals of these species inside the reserves they could determine which parents produced each juvenile fish by matching genetic signatures. The results were remarkable. For both species of fish in the study, the parents in the reserves contributed about twice as many juveniles to the study area (which included reserve and non-reserve zones) than parents from fished areas. The extension of this is that by protecting 30% of the Great Barrier Reef from fishing, fisherman have access to as many fish outside of the reserve as if they could fish the entire reef area. Thus there has been no opportunity loss by designating areas of protection. That sounds like a win for the fishermen and a win for the ecology of the reef.

In summary, full marine protection establishes a fully functioning marine community with all trophic levels intact, from top predators down to small invertebrates. The number of individuals and biomass of species targeted by humans is much higher inside reserves than outside. And the benefits of these more numerous and larger target species inside reserves are more fish outside reserves that are available to fishermen. Yet despite all this evidence of the benefits or marine reserves, there remains strong resistance to their establishment, and most strongly from commercial and recreational fishermen who would be the major beneficiaries of the increased biomass and resupply of juveniles that reserves can provide well beyond their boundaries.

The reason reserves have such a positive benefit comes down to some fundamental biological principles. As female fish get older and bigger, they produce eggs in much greater numbers, and these eggs are better quality. The consequence is that the larvae that hatch from these high quality eggs have a higher chance of survival to become juveniles, than do eggs from younger fish. In the statistical game of marine populations, these big, old, fat females make a disproportionate contribution to additional juveniles to the population. And it is the larvae that can disperse well beyond reserve boundaries to seed distant areas.

Fishermen prize the biggest fish; outside of reserves, most fish are just below or around the legal catch size, as larger fish are heavily targeted by fishermen and removed from the population. In contrast, inside reserves, most fish are larger than the legal catch size. It is the loss of these larger individuals in fished areas that has drastic negative consequences for the recovery of marine populations.

By raw numbers, New Zealand has reached its international obligations under the Convention on Biological Diversity by protecting 10% of its Exclusive Economic Zone (EEZ) from fishing, and will easily have exceeded this once the Kermadec Ocean Sanctuary is established. But the bulk of the reserve areas are in remote parts of New Zealand’s EEZ, at the offshore islands of the Kermadecs and the sub-Antarctic islands. This is no accident, as politically there is least resistance to limiting fishing access to these remote areas. The problem is that these remote areas are not at all representative of marine habitats in the rest of New Zealand. The stark statistic is that only 0.3% of the coastal area of mainland New Zealand is protected from fishing, and mostly in very small reserves that have limited ecological benefits because of their small size. These have been able to be established because they are attractive coastal areas of high amenity to people, so they have achieved strong community support. But even then it can take a decade of intensive campaigning before a reserve is established, which is what it took to get New Zealand’s first marine reserve at Cape Rodney to Okakari Point in 1975; this small reserve is now visited by over 300,000 people annually.

Marine reserves that work effectively share five features: they are no-take, well-enforced, over 10 years old, large (greater than 100 km2), and physically isolated for example by deep water². By this measure only five of New Zealand’s 37 marine reserves measure up, and these are all at offshore islands. There is a glaring absence of large reserves on mainland New Zealand that is representative of the range of habitats. Why do we need large reserves? Because fish and rock lobsters can leave small reserves where they are vulnerable to capture – which means that these small reserves partially fail in supplying an abundance of juveniles to the surrounding area.

Proposals to establish larger reserves along the coast have usually faltered. A proposal in 2012 to establish a large reserve on Great Barrier Island had strong community support and seemed to have good momentum. But due to the complexity of the existing Marine Reserves Act, it required both the ministers of Conservation and Primary Industries to agree. As has often happened in the past, only one minister endorsed the reserve so the proposal faltered. Meanwhile the Sea Change process to establish a spatial plan for the Hauraki Gulf has suffered delays due to the complexity of agreeing to a reserve network.

The current mechanism to legislate marine reserves is challenging and it has been recognised for many years that the Marine Reserves Act 1971 was due for an overhaul. The government has released a consultation document on a proposed Marine Protected Areas Act. The emphasis in the proposal is for economic opportunities and exploitation security, rather than habitat and population recovery. The influence of the proposed Act extends out only to the territorial seas (12 nautical miles from the coast), missing the opportunity for prudent management of the remaining 90% of New Zealand’s marine estate that extend to 200 nautical miles from the coast.

It will take political courage and leadership to develop a truly representative system of marine reserves. Rather than seeing marine reserves as a loss of access rights, they should be seen as prudent management tools to ensure healthy marine environments without reducing the quantity, size and quality of fish available overall to fishermen. Given that most of New Zealand’s marine species are found nowhere else in the world, there is an opportunity to maintain this diversity by protecting habitats in a representative network of large marine reserves. Besides the obvious benefits to marine life and ecosystem health, this will have broader benefits to many sectors of the community from increased tourism and enhancing New Zealand’s “clean green” brand.