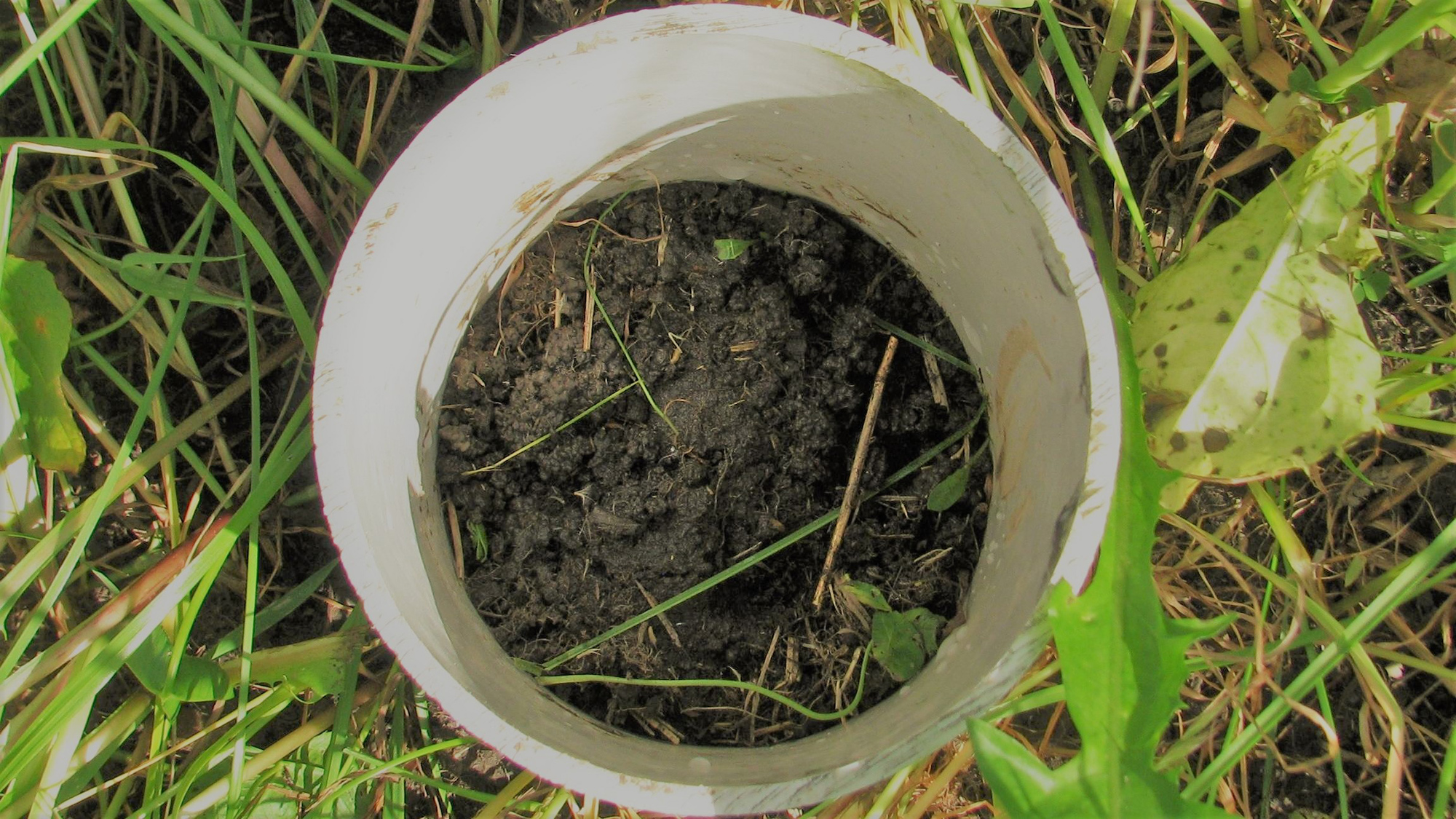 What do soil surfaces look like to absorb 200mm rainfall per hour?  This question is not asked in New Zealand agriculture and is overlooked because no text book illustrates this essential principle. The photo shows what soil surfaces look like to maximise rainfall absorption – cottage cheese, not cheddar. Note the soil colour is black, not grey as many NZ farming soils are described. This colour, and it’s associated absorption properties, are due to organic matter and the amount of one element: carbon.

Soil carbon is precious for farmers. It determines how much water soil can hold, the fertility and biodiversity present in the soil, and therefore the length of growing seasons. Every kg of carbon holds at least 4kg of water and a lift of 1% soil carbon in top 10cm is equivalent of Aus$1,500 – Aus$2,000 with current fertiliser prices.  (The bank we draw nutrients from) High carbon, biologically active soils are often two degrees warmer than those which aren’t. It’s said this is the equivalent of dropping over 300 metres in altitude.

So what is the potential of soil carbon?  At the Paris summit, New Zealand signed up to the French government initiative to sequester 4% of carbon in soil to improve soil organic matter content globally. Why do that? Because soil holds more carbon than living plants and atmosphere combined. The problem is the ever changing amounts present in soils, is primarily due to what is happening on soil surfaces and above.

Photosynthesis drives soil carbon with 10-40% of photosynthesised carbon passing through plant roots within an hour (Kumar et al, 2006). These exudates comprise of more than 150 compounds which feed soil organisms (Narasimhan et al, 2003). It is activities of bacteria, fungi and other soil life which stick together soil particles into aggregates that create soil structure. The nature of carbon compounds determines whether it’s labile (and quickly decomposed) or recalcitrant, the ideal forms for sequestration.

Farmers and agricultural professionals are excited about possibilities here, so why isn’t more said? Clearly passionate about soil carbon, Louis Schipper, a professor at the University of Waikato’s Earth and Ocean Science department, observes that there is a lot of noise but not hard data on what pastoral practices sequester and lose carbon in New Zealand and elsewhere (Schipper et al, 2017). Schipper suggests that surprisingly little is known because nobody thought of looking at soil carbon. Instead most soil analysis focused on minerals for fertiliser companies.

The Schipper review makes clear phosphate fertiliser doesn’t make any difference to carbon stocks.  Irrigation while increasing production reduces carbon levels most likely due to higher soil microbial activity. There is no definitive data yet on the effects of nitrogen, or the impact of earthworms. We know pasture renewal loses carbon, up to 1-2 tonne depending on whether or not cultivating or direct drilling is used (due to decomposing roots and soil biology). Bare soil surfaces exacerbate the amount lost, therefore direct drilling reduces the amount lost compared to cultivation. Technologies like bio-char and carbon based soil conditioners affect soil carbon but they are merely surface amendments.

Surprisingly, what isn’t known is how grazing regimes affect soil carbon levels in New Zealand. Instead, Schipper focuses on farming systems (dairy, dryland, irrigated, hill country) and ignores grazing regimes. Grazing has greatest influence on sward composition, amount of litter on soil surfaces, size of photosynthetic leaf area, and therefore extent of exudates pumped into the soil. No effort has been made to look at the timing of grazing, grazing frequency and pasture recovery times, nor stock density (as compared to carrying capacity). Instead most scientific interventions focus on expensive technologies such as irrigation, synthetic fertilisers, pharmaceuticals, and biochar and when are their carbon footprints ever evaluated?

(Soil change over four years) The same bank four years apart showing how plant roots help develop soil. Black streaks follow roots down into pumice soil in 2011 (left photo) extending the A horizon. By 2016 the white pumice had gone replaced by a deeper A horizon.

While much research draws from grasses and pasture plants growing through life stages under scientific conditions, how this differs from pulsing mature plants under grazing conditions as found on farms, is where there is more work to do. Could observations of why diverse pastures hold carbon levels steady, whereas ryegrass monocultures lose carbon, be due to unrealistic productivity claims about monocultures? And does this then drive overgrazing and stripping of ryegrass plant abilities to regenerate themselves and feed their soil communities?

Where are New Zealand scientists targeting their focus? There are three areas; hill country, tussock grasslands, and peat soils. Hill country data is showing increases in soil carbon and scientists aren’t sure why. Tussock grasslands which suffer from overgrazing, burning, and pests can lose carbon but proper grazing including occasional fallow from grazing is good for soil carbon. Both these situations could reflect how grazing practices influence soil carbon levels.

Peat soils notoriously lose carbon. Found in Northland, Waikato and Southland, they can be 9-10 metres deep. Once drained they can lose 3-4 tonne per year and while it might take 100 years or longer for those soils to fade away, all that carbon is going into the atmosphere. The question to be asked here is where drainage is required and whether rates of decomposition can be slowed as higher water tables prevent decomposition.

However, long time soil carbon advocate, and ex-Agmardt board member, Waikato farmer Max Purnell contests many issues around current New Zealand soil carbon research. He argues scientists do not look deep enough, at least a metre deep, to see where much higher rates of carbon accumulation occur. He cites private research showing highest rates of carbon accumulation happen anywhere between 1 to 6 metres. This conflicts with the review on carbon sequestration rates and potential soil volumes because few New Zealand academics have looked this deep.

Nowhere in the Schipper review is the nature of carbon measured defined in New Zealand research. Are they short or long chain carbon compounds? There is recognition that shorter chain molecules are more labile and predisposed to decomposition. Longer chain carbon molecules are more stable than shorter and it’s claimed these are deposited in greater qualities in deeper soil profiles. Schipper doubts this. Soil carbon is considered more stable at depth due to increased residence time and declining mineralisation rates meaning carbon is less labile and more recalcitrant (Schrumpf et al, 2013). However, some researchers assert fresh carbon entering deeper soil layers decomposes recalcitrant soil carbon by stimulating dormant microbes but have yet to prove this theory at depth in soil (Fontaine et al, 2007).

Getting real data from deep soil profiles is difficult and expensive. There is recent work being demonstrated in Canada where soil cores to a metre deep are being examined and similar work is happening in New Zealand. Dr. Christine Jones’s private research highlights greater change in carbon levels deeper down the soil profile on an Australian farm but New Zealand science has yet to document this.

Furthermore, there are few farmers in New Zealand who graze to increase soil carbon as their grazing focus is livestock performance not ecosystem enhancement. 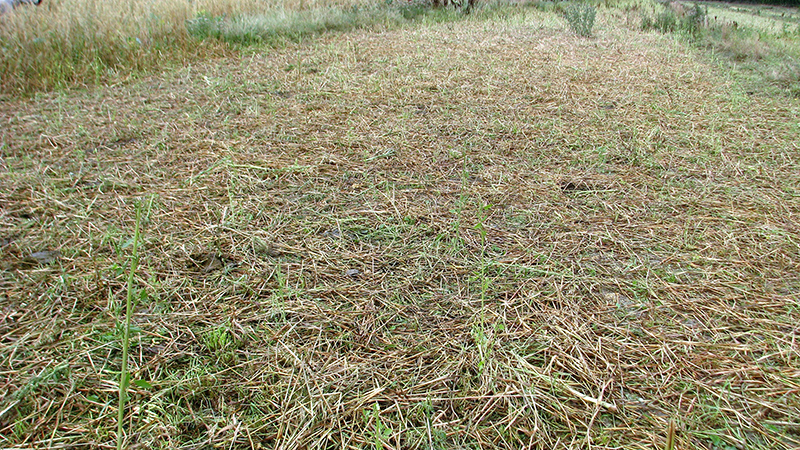 It’s this lack of real soil carbon data at depth that adds to why Purnell believes steady state modelling founding soil carbon predictions are flawed.  He argues these models are conceptually based rather than relying on actual measurements, particularly below 30cms.  Therefore, establishing relationships on modelled data to predict soil carbon levels further down soil profiles is speculative, something both Goh (2004) and Schipper et al, (2017) acknowledge. It highlights frustration between soil carbon promoters and a scientific community who understand physical and chemical mechanisms of soil carbon stabilisation and acknowledge their limitations regarding biological mechanisms.

Purnell is not alone in his criticism of modelling programmes guiding environmental advice and relationships to soil carbon. As independent soil scientist Samuel Dennis points out, a divisive issue for farmers is the relationship between Overseer, the nutrient budgeting programme driving the basis of productivity limits for many regional councils, and soil organic carbon and nitrogen. Overseer predicts nitrogen losses from farming systems, but carbon and nitrogen are intricately linked, so whenever carbon is accumulating in soils nitrogen is accumulating also, reducing nitrogen losses.

However, nitrogen accumulation rates can only be adjusted crudely in Overseer, and users are advised not to adjust them at all as the model is not calibrated for such changes. Overseer doesn’t recognise factors contributing to C and N accumulation such as surface pasture litter, volumes of exudates leaving plant roots, or root depth.

These attributes have a strong bearing on soil abilities to deal with nitrogen leaching.  So it doesn’t reward farmers who are building capacity to hold nitrogen.

So where does this leave the soil carbon debate? Schipper’s view is clear; that carbon credits are unlikely incentives. He explains if a 100ha property sequestering 1 tonne C/ha/yr; that is 100 tonne per year for the property. If price per tonne of carbon was $NZ25/tonne (currently $17) the whole farm would raise only $2,500. Add on costs of measuring soil carbon or a lower price if carbon is lost throughout the year and net income will be less. While sequestration rates might be high initially they cannot be maintained as carbon levels rise.  Based on this thinking there is no carrot here.

Yet despite conflicting views, both sides believe the greatest advantages for farmers increasing soil carbon, come from improved soil health; the emerging term which emphasises greater water absorption and retention and higher fertility. Amounts, rates, and nature of these benefits will be the focus of further debate.  What is not being denied is that soil carbon can reshape the nature of agricultural production through enhancing landscape function and community resilience.

Narasimhan, K. Basheer, C. Bajic, V. B. and Swarup, S. (2003).  Enhancement of Plant-Microbe Interactions Using a Rhizosphere Metabolomics-Driven Approach and Its Application in the Removal of Polychlorinated Biphenyls. Plant Physiology 132, 146-153.