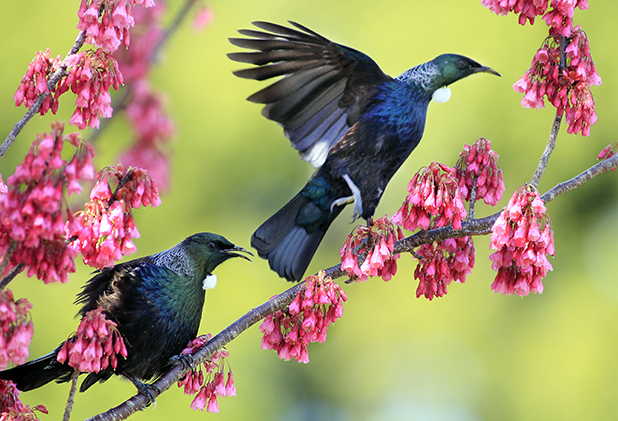 Although being good looking and tasty, the banana hasn’t had sex in thousands of years.

Nearly all commercial bananas (Cavendish) are sterile clones, making them susceptible to disease due to the lack of genetic diversity. Right now, the fungal disease Black Sigatoka is stalking the defenseless Cavendish banana, threatening it with extinction.

The increasing standardization of food crops is threatening their ability to adapt and survive.

A lack of genetic diversity often requires high levels of pesticide use that can result in health defects. Studies show a fifth of male banana workers in Costa Rica are sterile, allegedly due to exposure of fungicides. Women in banana packing plants are twice as likely to suffer from leukemia and have babies with birth defects.1

But bananas are not the only ones in trouble. Pineapple, mango, garlic and countless other plants are genetically weakening, with global food security becoming a reality.

“Genetic diversity is the (protective) hedge between us and global famine.” (SEED; The Untold Story)

Commercial fruit growers have concentrated on increasingly few varieties, discarding others through artificial selection. Crops are bred for appearance, taste, size, and function. In the process, the plant’s natural ability to withstand pests and disease has been undermined and the wild varieties are often lost. 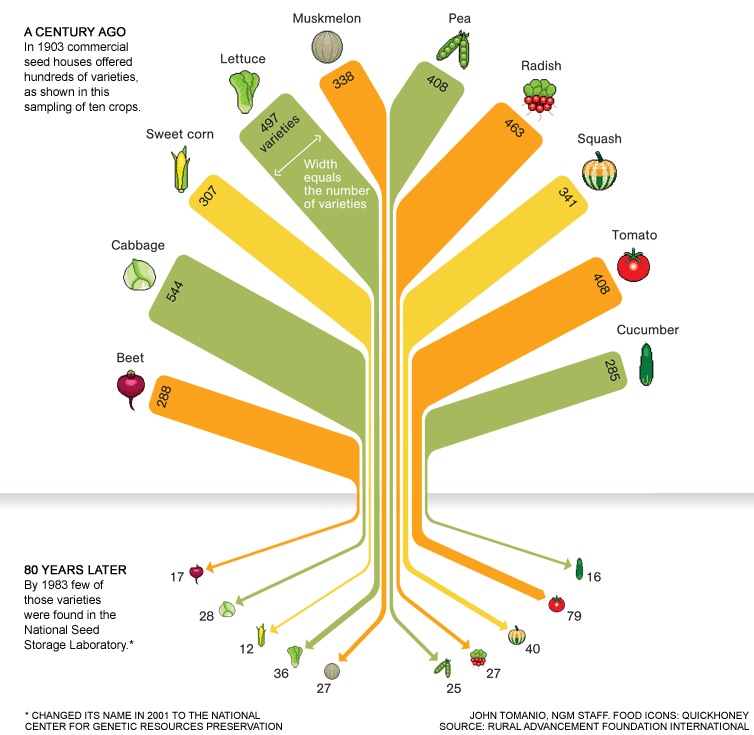 Fruits and vegetables aren’t the only species in danger. Endangered Earth claims that “in the last 500 years, human activity has forced over 800 species into extinction.”

We’re struggling to save popular species such as mammals and birds, leaving little hope for endangered and obscure vegetables such as the Alonquin squash or the Speckled lettuce.

In fact, biodiversity is already below the safety limit across half the world’s landmass.2

Most global biodiversity loss occurs as a result of land-use change associated with habitat destruction, where the land is cleared for agriculture or development.

Agriculture began 10,000 years ago, but the privatization of seeds has only occurred very recently. Farmers find it increasingly difficult to exchange seeds or grow crops that aren’t genetically modified.  Farmers have grown dependent on companies like Monsanto, having to buy new seeds every year, together with Monsanto’s pesticides. Monsanto’s controversial use of toxic products and their commitment to genetically engineer the worlds’ food supply, threatens our health, environment, and economy. Seed diversity has declined, rising seed costs have displaced farmers and the pesticide and fertilizer companies that control most seeds today have flourished.

Nutrient imbalance is estimated to account for 5-15% of current global biodiversity loss. Air pollution and nitro-phosphorus saturation via synthetic fertilizer can harm species of high conservation and food value which are naturally adapted to a few nutrients and are threatened by eutrophication.3

The millennium seed bank partnership estimates that 60,000 to 100,000 plant species are in danger of extinction. In New Zealand, 40% of the 2378 indigenous vascular plants are threatened with extinction. Seventy-two per cent of our indigenous freshwater fish species and 80% of our 203 bird species are also at risk.4 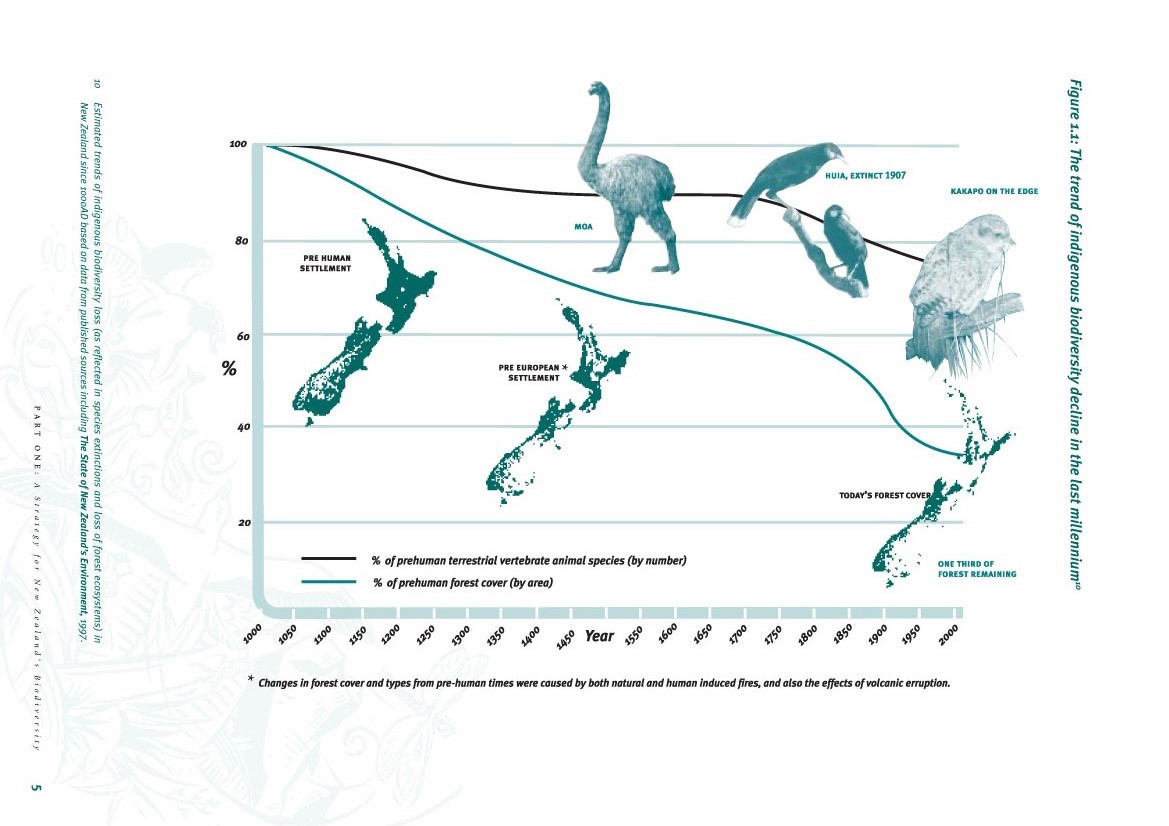 Rats, stoats and possums kill around 25 million of our native birds every year, with their direct economic cost to the primary sector being $13.3 billion or 1.96% of GDP.5 The New Zealand government recently announced that by 2050 the country will be predator free. Although ambitious, this conservation project will draw worldwide attention and reinforce New Zealand’s trade and tourism brand.

“The high percentage of endemic species (those found nowhere else in the world), make New Zealand’s native biodiversity both special and highly vulnerable.”4

Currently, climate change receives all the attention while biodiversity plays second fiddle, but this might soon shift.

Businesses are only beginning to understand the risks and opportunities associated with biodiversity loss. The plight of bees is a symbolic representation of the interdependence between biodiversity, business and society. “Colony Collapse Disorder, reported in many parts of the world, is a serious threat to agricultural stability since one in five plants is pollinated by bees.” Industries reliant on agriculture are in jeopardy if biodiversity continues to decline.5

It is increasingly popular for businesses to track, manage and minimize their biodiversity impact. Coke, Puma, Dow, and Unilever are benefiting from ecosystem services approaches that track biodiversity.

“The Natural Capital Project is forming a partnership with Unilever to determine how land-use changes will affect their commodity targets, ecosystem services, and biodiversity. For example, as Unilever explores switching from using petroleum products to those made with biofuels, they can better understand how impact changes in land use resulting from their consumption decisions would ultimately impact biodiversity.”6

Living Water is a ten year $20 million partnership programme between Fonterra and the Department of Conservation focused on improving biodiversity and water quality at five significant catchments where intensive dairying exists. In March 2016, Living Water signed an agreement with the Queen Elizabeth II National Trust (QEII) to formalise a partnership to help farmers and landowners legally protect areas of natural and cultural heritage.

The New Zealand Manuka honey industry is a sound example of a native species contributing indigenous biodiversity to human wellbeing, while providing economic benefits. In association with the Trees for Bees programme, Comvita seeks to develop productive Manuka plantations and a range of native plant species that assist with beehive health and increase biodiversity.

“Bees are like the canary in the coalmine – they’re a great indicator for environmental health.” (Janet Luke – Save our Bees)

There are many benefits to New Zealand protecting its native biodiversity while using resources sustainably. New Zealand has a strategic economic advantage connecting our ‘clean and green’ brand to our key natural environment-based industries. This could provide immense opportunities for businesses to position their branding and communication around biodiversity enhancement. Securing a supply of ingredients, environmental stewardship, and biodiversity management ensure product quality; a major way that modern brands position themselves. The opportunity to secure premium prices for our exports based on brand is compelling.

Studies have shown that public understanding of biodiversity is extremely low, with only 18% of the UK population having a ‘fair amount’ of knowledge of biodiversity, and 31% never having heard of it.

The most tangible way for consumers to reverse the decline of biodiversity is through broader education leading to greater awareness. “We have the opportunity to practice ecological restoration at a national level. Broad community discussion is needed, informed by science, and responsive to societal and cultural values.”7

Without swift action and collaboration, the next generation of New Zealanders will inherit a country lacking in biodiversity, where many millions may suffer from food insecurity.