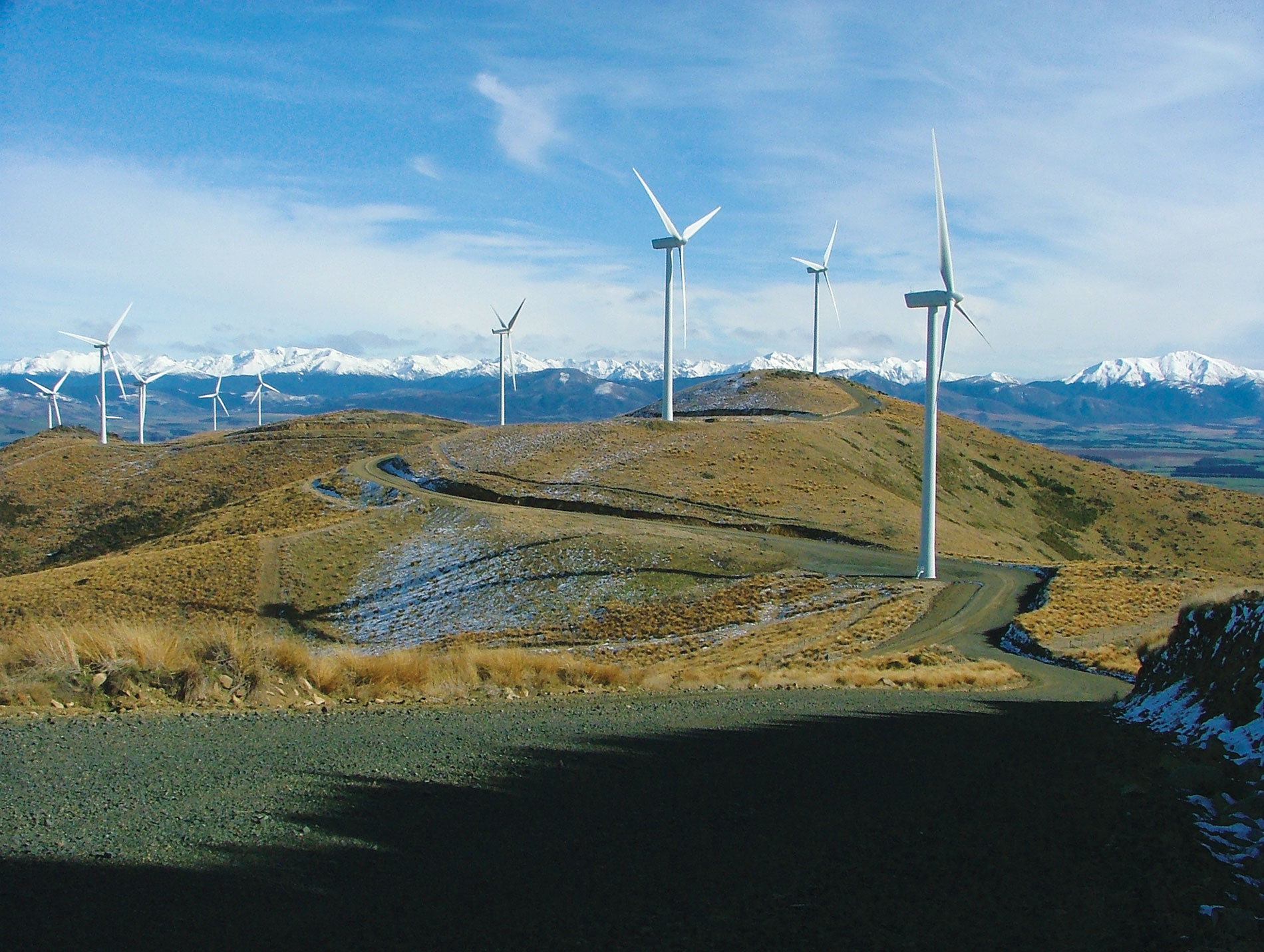 Just north of Wellington the rugged coastline is dotted with wind turbines. Construction for Meridian Energy’s Mill Creek 60 megawatt wind farm commenced in 2012 and will produce over 200 gigawatts each year. Local landowners invited tenders to build the wind farm as a means of diversifying their farming income. Situated close to the High Voltage Direct Current inter-island transmission line the power plant will help balance out the transfer of electricity from the South Island when our hydro lakes are low.

Wind energy currently delivers just 5% of our total electricity supply but has the potential to replace all of our existing fossil fuel generation. International innovation is driving down the cost of wind energy. Since the 1990s rotor diameters have doubled and the average height of the turbine hub has increased by 50%. This has increased the generation capacity of a given wind turbine as winds blow faster at greater heights and larger rotors can generate more power at lower speeds.

Last month, the United States Energy Information Administration reported that wind power achieved grid parity in many parts of the country with the wholesale price of wind power falling to US$23.5 per megawatt. In New Zealand dollars that equates to $36.2 per megawatt and is significantly less than the marginal cost of New Zealand’s gas-fired plants.

With our extended shoreline and strong southern winds New Zealand is especially well placed for offshore wind projects. The United Kingdom and Germany show how quickly this renewable advantage can be deployed. The world’s largest offshore wind farm, the 630 megawatt London Array, was commissioned in 2013 and now delivers 2,200 gigawatts of power each year, enough to power a quarter of million homes.

Germany will add more offshore wind this year than in all previous years and is on track to reach 6,500 megawatt capacity by 2020. That capacity is equivalent to eight Manapouri plants (our largest generator of hydro electricity).

The Ministry of Business, Innovation and Employment estimates that New Zealand’s electricity demand will increase by 1.1% per annum over the next 15 years requiring an additional 10,000 gigawatts of annual generation. Given that New Zealand has over six times the length of coastline of Germany, we could easily meet our 2040 energy demands by building the same amount of offshore wind capacity that Germany is adding in just the next two years.

One of the key arguments against wind is its intermittency. What do you do when the wind isn’t blowing? New Zealand’s high proportion of electricity generation from hydro plants allows us to solve this issue. Recent upgrades to the national grid have further enhanced our ability to match hydro generation with times when the wind turbines stand still.

If there’s anyone who understands the risk of power outages, it’s information technology companies and yet more and more giants are switching their data centres to 100% renewable electricity. Apple, Google, Facebook and Amazon have all committed to 100% renewable electricity and are preferring locations with strong growth in renewables. For example, Iowa’s billion dollar commitments to wind energy helped it secure equally gargantuan size investments from Facebook and Google for new data centres in the state.

European innovation is also providing leadership in energy storage to deliver energy when the wind isn’t blowing. An Audi plant in northwestern Germany will soon start converting surplus wind power into synthetic methane by combining carbon dioxide with water in a process called methanisation. Carbon dioxide neutral electricity can then be generated from the methane as the carbon dioxide emitted will be equal to the carbon removed from the atmosphere at the start of the process.

If large scale storage was required in New Zealand a century old technology is available: pumped-storage hydropower. This effectively converts a hydro power plant into a massive grid scale battery. When surplus energy is supplied to the grid, this excess energy is used to pump water uphill into a reservoir that can then deliver gravity fed hydro energy at a later time.

Overseas, start-ups are exploring modern innovations on the pumped storage model. Gravity Power, a Californian based company has designed two vertical shafts, one inside the other, that uses surplus power to raise a giant piston which when it then falls generates electricity by forcing water through a turbine.

Others have argued that wind is not well designed to match peaking demand. Again, New Zealand is blessed with renewable energy advantages to meet this need – geothermal. This week Contact Energy announced it will soon close the Otahuhu B gas-fired power plant. In the 2014 financial year the Otahuhu plant produced 1,700 megawatts of power. Contact Energy’s proposed 250 megawatt extension to its geothermal plant on the Tauhara field, north of Taupo, could replace this power. Contact Energy has already secured consents for the extension. However instead of deepening its investment in geothermal, Contact Energy announced it would re-invest in its gas fired Stratford plant, the same plant that failed to meet its 1990s commitment to sequester the 250 tonnes of carbon dioxide it emits per hour at full capacity.

Wind energy can also be a great match for electric cars. Wind tends to blow at night exactly the time when most cars are parked in their owner’s garages. Perversely, research by National Institute of Water and Atmosphere (NIWA) predicts that by 2040, wind speed in New Zealand will increase with climate change thereby increasing the annual generation per megawatt of wind energy capacity.

Collectively, New Zealand’s major power generators have ten new projects to deliver 2852 megawatts of wind capacity. Consents have already been secured but have been put on hold while demand uncertainties remain. This additional wind capacity would generate almost 10,000 gigawatts of energy each year, one quarter of our annual electricity needs. Next week we will explore the role of solar energy in New Zealand’s path to 100% renewable energy.