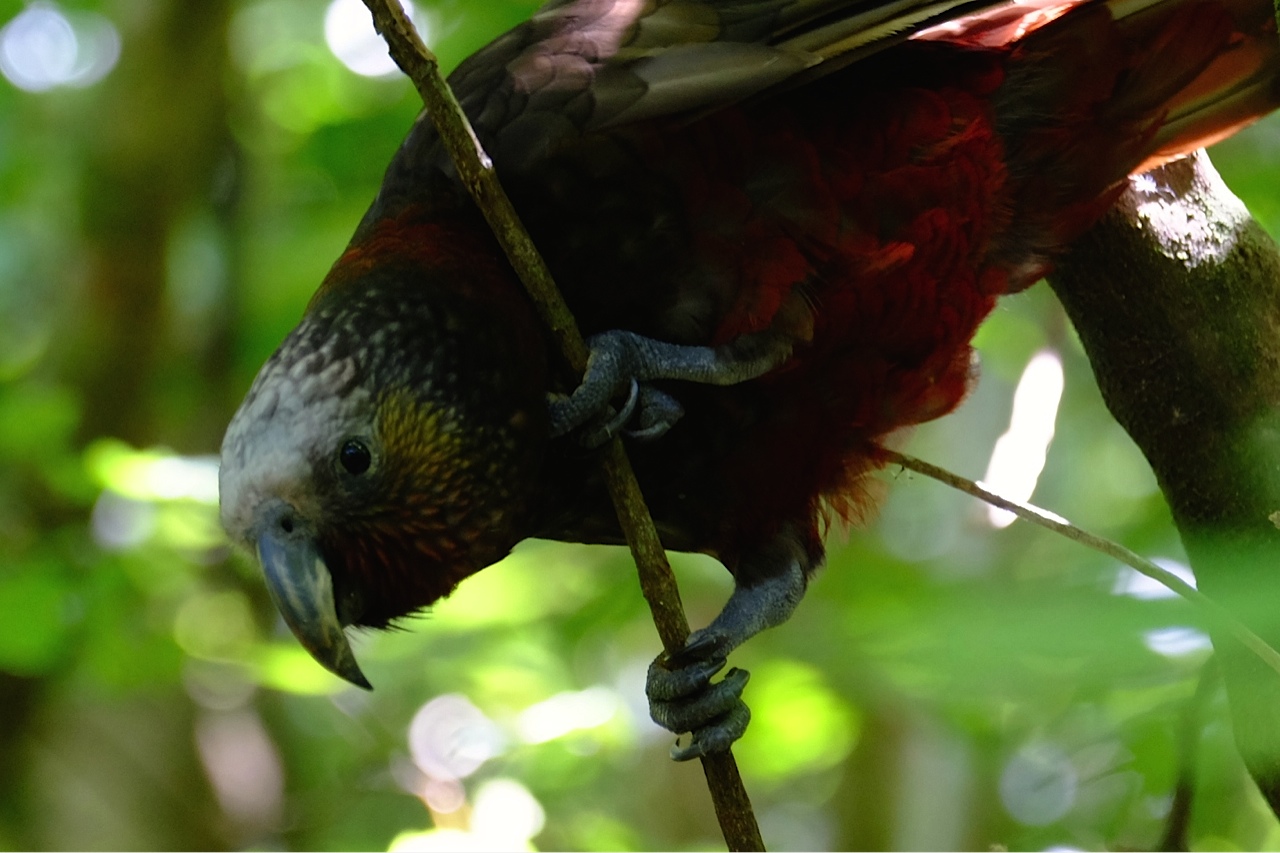 Make no mistake; it’s their city too – living with nature in the age of ecological restoration.

If you’re lucky in Wellington these days, you might look up and spy the rufous beauty that is a screeching kākā. Extinct in Wellington for nearly a century, the bush parrots are spilling over the predator-proof fence of Zealandia and (tenuously) into the city.

As the natives comeback, the humans applaud. In a 2012 survey about 80% of respondents thought native birds ought to be in the cityCharles, K E 2013. Urban human-wildlife conflict: North Island kākā (Nestor meridionalis septentrionalis) in Wellington City. VUW Masters Thesis. http://researcharchive.vuw.ac.nz/handle/10063/2994: charmed by the tūī jazz fest and the kākā circus that has come to town.

New Zealand’s natural heritage is exceptional. It is famous globally due to both the extreme scale and pace of loss since humans arrived as well as the prevalence of deep endemism (our species are not just unique, but have been evolving isolated from others for tens of millions of years).

Internationally, our ecosystems have been described as being ‘as close as we will get to study life on another planet’Diamond J M, 1990, New Zealand as an archipelago: an international perspective In: Towns DR, Daugherty CH, Atkinson IAE eds. Ecological restoration of New Zealand islands, Conservation Science Publication No. 2, Department of Conservation, Wellington, New Zealand, pp. 3–8.. It’s no wonder that species like kauri, kākā, kokako, tūī, tīeke and the weta have become a critical part of our national identity, as Kiwi as the All Blacks, and errr, kiwi. Try selling a hedgehog, rat or possum as our national icon.

“They are our national monuments. They are our Tower of London, our Arc de Triomphe, our pyramids. We don’t have this ancient architecture that we can be proud of and swoon over in wonder, but what we do have is something that is far, far older than that. No one else has kiwi, no one else has kākāpo. They have been around for millions of years, if not thousands of millions of years. And once they are gone, they are gone forever. And it’s up to us to make sure they never die out.”

Unfortunately, our biodiversity is in crisisBrown, Stephens, Peart & Fedder, 2015, Vanishing Nature: facing New Zealand’s biodiversity crisis, Environmental Defence Society, Auckland. Only 200 out of 2800 threatened species receive active recovery management (Auditor General 2012). Ours is a time when critical decisions need to be made to avoid ongoing and irreparable loss. One of those decisions relates to how we choose to live alongside these taonga in our cities.

Ecological restoration is a passionate pastime for thousands of kiwis. Wellington alone has approximately 125 community groups which collectively represent thousands of individuals. Many urban Kiwis have made a kaitiaki role a part of their lives: office workers check pest traps on lunchtime bike rides, families plant native trees for future generations on the weekend, schools and communities clean up beaches and streams.

The results of these efforts are becoming clearer as more research unveils the contribution of ecological restoration to urban amenity and biodiversity conservation. In many cities in New Zealand – despite all the pressures – it is entirely possible to live alongside endangered species. These rare birds are not in a cage, not in a zoo … but on your deck and galumphing on your lawn.

In the case of kākā there are less than 5000 birds remaining globally, and a hundred or so call our windy capital home. Two generations ago the North Island saddleback (tīeke) were exiled to a couple of predator-free islands off Northland. Now there are tīeke nesting in Wellington’s Aro Valley, five minutes from The Beehive: their sharp ti-ek-e rings out from the hillsides as a live-broadcast RNZ morning birdcall. Not so long ago the only places the public could experience these wattlebirds was on a ‘lifeboat’ island like Kāpiti or Tiritiri Matangi. Their fragile, but promising presence in urban backyards is astonishing.

Building resilient human and natural communities begs a measure of progressive symbiosis, not a binary separation. Humans in urban areas have much to gain from the presence of native wildlife where they live.

The first benefit of integrated urban ecosystems is increased accessibility to our natural heritage. City dwellers are able to delight in the displays of birds with evolutionary quirks drawn from the imagination of Dr Seuss, and in glistening mosses and scuttling invertebrates in their backyards. In an age of technology, we forget to connect. As New Zealand’s ‘Most Admired Man 2016’ tells us:

Despite assertions to the contrary, several studies have found that the presence of native wildlife attracts a premium both in real estate and tourism. A 2016 VUW and WCC study looking at TradeMe property listings found that the presence of native wildlife was regularly touted to sell real estate. A swathe of earlier studies demonstrated that not only do people love nature in cities, but many would pay for the privilege of having more of itVesely, E., 2007, Green for green: The perceived value of a quantitative change in the urban tree estate of New Zealand, Ecological Economics 63, 605–615.

Home-grown responses to protecting urban biodiversity, like the self-resetting trap technology of Newtown-based Goodnature, are being successfully exported. Increasingly, the natural environment and close proximity of parks and natural areas is rated as a key reason why people value and visit Wellington.

The recent Pure Advantage report, Our Forest Future, also recommended bolstering efforts to increase urban tree cover, in recognition of a range of benefits including enhancing our ability to address climate change.

Urban biodiversity helps a city become a more desirable place to work and play. Urban biodiversity increases quality of life, delivering psychological and physical returns. Urban parks host mountain-biking and running trails alongside habitat for endangered birds like kārearea and tīeke, and the users invest in both. The civic pride is tangible:

“… the renewed presence of tūī, kererū, kākā and other native birds in our suburbs is making Wellington an even more attractive place to live.” Councillor Helen Ritchie, 2016.

But let’s take a moment to remember that it’s not all about us. The human benefits of wildlife are only part of the justification to be a good neighbour to our natives. They have an intrinsic worth quite apart from any value we might ascribe to them. It’s their city too. Before the city, there were trees, clean waterways and an unmodified coastline. That was theirs too.

There is a concentration of acutely threatened environments and their associated biota in cities and their peri-urban zones (Clarkson et al 2006) and cities have a disproportionate ecological footprint (for example, London has an ecological footprint 120 times the area of the city itself). This means that facing our biodiversity crisis in part relies on striking a better balance in our urban areas and reducing their impacts on the wider landscape.

Sometimes the interests of urban dwellers and native wildlife will clash. The catastrophic loss of nature in recent decades is profound testament to just that, and a reminder of exactly which party tends to win the battle. That must change.

The spill-over of natives from the Zealandia mothership comes on the back of evolving attitudes to pest control and pet management. These avian ambassadors show what change might be possible. The residents in Zealandia’s ‘halo’ have made room in their lives for the returning neighbours, and the vast majority are delighted. Whole suburbs have become pest free (Crofton Downs, Highbury) and many more are committed to following suit. This is transformative and reflects outcomes in other cities. 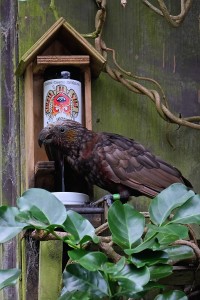 Hamilton Halo and nearby Maungatautari Mainland Island have seen the resurgence of the bellbird to the delight of the riverside populous. Other examples include Ark in Park (West Auckland), Orokonui (Dunedin), Brook Waimarama (Nelson) and a landscape scale pest control programme in the Hunua Ranges (south of Auckland), to name a few.

These community-led efforts are an affirmation of the special identity we draw from the whenua. Our league team is the Kiwis, our unofficial flag is a silver fern, our music awards are the Tūīs, our world-leading FX company is called Weta. NBA star Stephen Adams boasts “I’m just a Kiwi”. Kiwis like kiwis!

Certainly, some have voiced strong opinions about the resulting conflicts; including that community conservation groups should be legally liable for the impacts of returning wildlife. This is absurd selective accounting. If we were to consider recovering the cost of damage to our prosperity, we wouldn’t start with roof nails prised by kākā – we’d might best start with extractive industries and consider giving our cheeky natives a free pass.

“Sydney-siders put up with cockatoos tearing their window sashes to pieces; Brisbanites tolerate rabies-carrying fruit bats trashing their fruit trees. Noosa residents know that human-eating crocodiles lurk in every creek and billabong, Floridians put up with alligators and panthers on their golf courses and Vancouverites have black bears wandering through their backyards.
Twenty years ago they were shooting them all to extinction — now they learn to live together. They do this because they know that the indigenous wildlife is a vital part of their heritage. The scratchings of a few harmless kākā on some foreign plants are nothing.”

Right on, Jim. It’s not just heritage value that makes urban biodiversity crucial. Being neighbourly with our natives is a positive choice for our future. It represents an alternative narrative to extinction and loss. If it means planting more kākā-resilient natives or not feeding the parrots – for the opportunity of having them here ‘in the wild’- then this cost seems minor.

Kererū or rock pigeon? Tīeke or rat? Long may commuters, mountain bikers, families, runners, and ramblers on Wellington’s trails have to dodge a hooning kākā!

The authors would like to thank Professor Bruce Clarkson (University of Waikato) and Tim Park (Wellington City Council) for their insights and assistance.