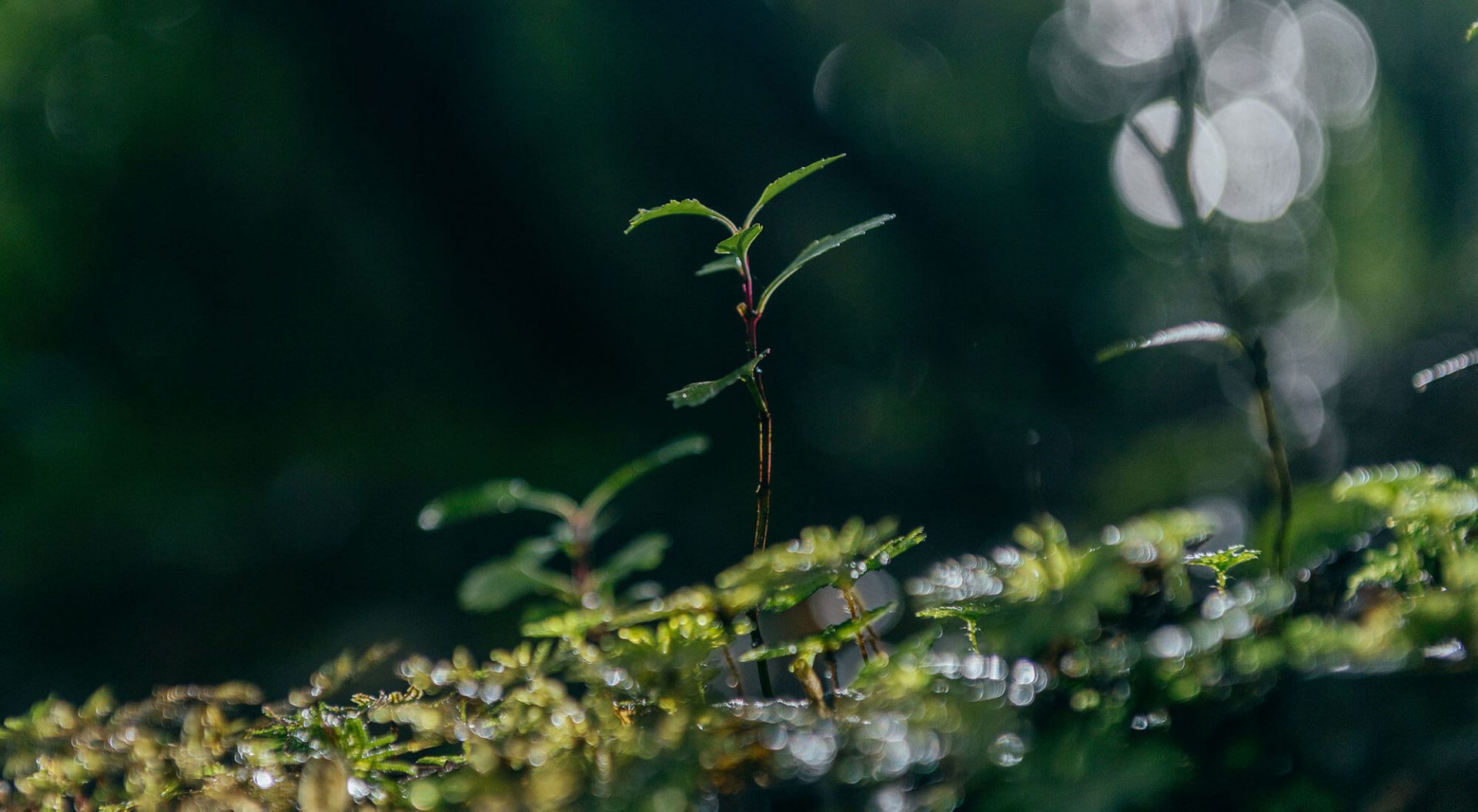 Anyone who believes in indefinite growth on a physically finite planet is either mad, or an economist –  Kenneth Boulding

Repeatedly, it flags population and economic growth as causes of rising greenhouse gas emissions, and as overpowering efforts to reduce emissions. For example, between 1990 and 2015, in spite of reducing per-unit relative emissions (e.g. for dairy, vehicles and electricity), New Zealand’s absolute (total) emissions grew 25% (third worst in the OECD, contrasting with a 15% average drop across OECD countries).

Like Arthur Grimes view (see Rethinking Growth Part One), the report also champions innovation, dedicating an entire chapter to it, and calling it “the closest thing to a silver bullet to enable humanity to meet the challenge of avoiding damaging climate change”.

In signalling the centrality of growth to escalating emissions, and of innovation in reducing them, we might expect the commission itself to think outside the square on growth, but it doesn’t.

Either that seems too sacrilegious, or the report is shackled by its own terms of reference:

Identify options for how New Zealand could reduce its domestic GHG
through a transition to a lower emissions future,
while at the same time continuing to grow incomes and wellbeing…
Once again, innovation is promoted as fantastic, but not in regard to growth.

And, again, we find the questionable bracketing of “grow incomes and wellbeing”, and yet only fleeting mention of inequality, with no discussion that reducing inequality holds more promise at all levels of our society than increasing incomes. This is especially important when increasing incomes generally exacerbates both emissions and inequality, thus propelling both the environment and society and in wrong directions.

The report does, however, highlight New Zealand’s weak R&D, especially in business, and emphasises the massive business potential for innovation for sustainability. It recommends boosting R&D from a feeble 1.2% of GDP to 2%, (still-lame at well below the OECD 2.3% average). In adopting this unchallenged, the government joined the commission in falling short on both ambition and innovation.

This leaves plenty of space for businesses to do better on both counts. Happily, more groups are being proactive, from the Climate Leaders Coalition, to the Chia Sisters Thousand Business carbon assessment (an initiative in association with the Sustainable Business Network and Carbon offsetter Ekos). But it’s a long, tricky road and we must travel at speed, while negotiating the potholes of patch-protection, uncertainty, and growth focus.

It’s a shame the Government and Productivity Commission weren’t eavesdropping on a discussion at the last  Cradle to Cradle Congress (C2C) in Germany. when I was talking with C2C founder Professor Michael Braungart and his colleague and circular economy specialist Doug Mulhall. Doug fixed me with a piercing look. “New Zealand is the perfect place for a world first,” he enthused. “The first complete country to commit to a circular economy.”

But maybe Mulhall is right, maybe we should accept the national challenge of being the first to fly that way. The world desperately needs to navigate away from dependence on damaging growth and consumption, and towards a business-friendly economy that truly sustains our environment and our wellbeing.

Pure Advantage is part of this quest and, hopefully, will review where growth sits in their pursuit of environmental goals. Conversely, if growth is pursued, how can it be reconciled with Pure Advantage’s high aspiration of New Zealand being “more sustainable in every sense”.

The Green Growth Opportunities for New Zealand report funded and produced by Pure Advantage researched and written by the The Auckland University and Vivid Economics is a paper that dips a toe into the same pond, with the other foot planted firmly in the “growth” ocean:

A good quality growth metric has to take into account capital
and contributions to wellbeing that are not traded in markets.

WHAT IS A CIRCULAR ECONOMY?

“Looking beyond the current take-make-waste extractive industrial model, a circular economy aims to redefine growth, focusing on positive society-wide benefits…decoupling economic activity from the consumption of finite resources… Underpinned by a transition to renewable energy, the circular model builds economic, natural, and social capital. It is based on three principles:

“Regeneration” (of society as well as nature) is important. “Not making things worse” is insufficient when planetary limits are so overtaxed (see 5 minutes into Kate Raworth’s easy talk here).

“Imagine a building like a tree,” C2C founder Michael Braungart suggests. “A building that cleans water and the air, makes oxygen, generates soil and nutrients.”

Numerous graphics express the circular concept, all entailing serious disengagement from extraction and waste generation. The one below, reinforces reuse and the ongoing value chain, and avoids reference to “recycling”, which is increasingly described as “waste in drag”.

Info on circular economies is widely available. E.g. a lot at Kate Raworth; the NZ Ministry for the Environment; or, for more product orientation, visit C2C Certified.

While this fits the Pure Advantage prescribed definition of green growth (rising output of environmental goods), caution is needed framing this as overall growth when it is largely substitution of, not addition to, economic activity (refer Rethinking Growth Part One).

So, is New Zealand up for a national circular economy?

Construction is a massive contributor to climate and resource problems…

Globally, we’re building a New York City every month, concrete alone produces up to 10% of all human GHG emissions, and sand is so over-consumed in several countries there are now black markets in it.We have hugely energy-inefficient patterns of subdivision and construction, and build (with the US and Aussie), the world’s largest houses. And the Christchurch earthquake showed how ill-suited our systems are to recovering products, even from new houses.

Although there is a long way to go, there are great initiatives around. E.g. “BAMB” (Buildings as Materials Banks) is a simple conceptual shift with massive implications: once we think of buildings as holding places for materials (not end destinations), the game changes, in design (e.g. standardised components); detailing (simplifying dismantling); construction (different techniques and materials); upstream and downstream value chains; and regulatory compliance. But these are completely doable, and do present marvelous business and sustainability opportunities.

A real join-the-dots opportunity is rushing over our horizon, and NZ is poised for a world-leading response. Our 1990s ETS forests are at milling age (“the wall of wood”). We should store the timber with its precious sequestered carbon, and NZ is a leader in heavy timber construction, with huge multi-faceted benefits:

That’s no small ask for a species that, for 12,000 years, has plundered and exhausted one regional environment after another, to the point Yuval Noah Harari, in his seminal book Sapiens, terms us ‘ecological serial killers’.  Harari doesn’t finish there, though. He makes the case that prehistoric hunter-gatherers likely had more free time, and more fulfilling lives, than at any time since the agricultural revolution. Let’s factor that into our model of life, and see what we end up with!

Which brings us to energy, with the potential to stand our lifestyle on its head regardless, but more rapidly with climate impacts.

We think of economies as monetary processes, with energy on-demand to help economies do their thing. But there’s compelling evidence, such as from visionary power engineer Professor Pat Bodger (now retired from the University of Canterbury), that it’s the other way round: we run energy economies, with economic activity and lifestyle as functions of the abundance and accessibility of energy Researching this back in the 1980s, Bodger showed that economic activity actually trailed energy availability rather than drove it.

Joseph Tainter, US historian, agrees, writing “Diminishing returns of the Energy Returned on Energy Invested (EROEI) is a chief cause of the collapse of complex societies.”

“The Killer Equation”, ECoE and EROEI

We really run an energy economy

“Diminishing returns of the EROEI is a chief cause of the collapse of complex societies”
Joseph Tainter, American historian

It takes energy to make energy available (e.g. to build and operate a dam and distribute its electricity). Our economy is driven by the surplus energy left after accessing and making it available.

The total energy extracted can be considered in two parts: 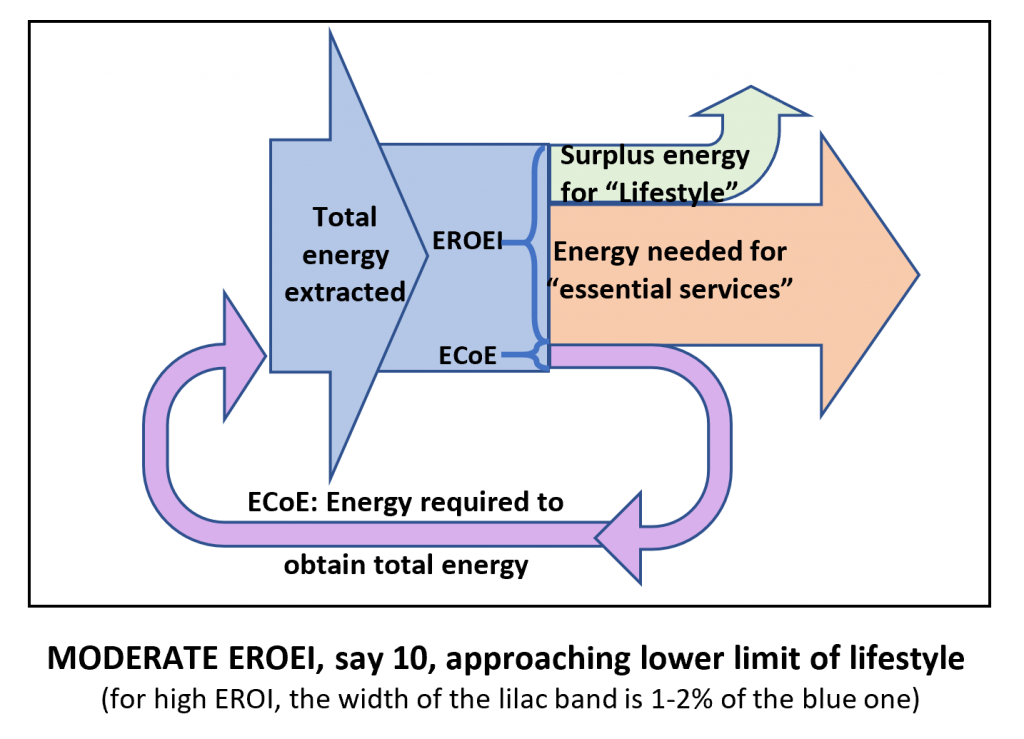 The EROEI of hydro power may be almost 100 (i.e. 1 kW used to generate and distribute creates 100 kW surplus), as were the early oilfields. Progressively, however, EROEI gets lower. (i.e. it takes more energy to get the energy, which leaves less to use. See separate diagram.) For the same essential services, the net effect is less surplus energy available for lifestyle (or vastly expanded energy sources to keep delivering the same energy surplus). 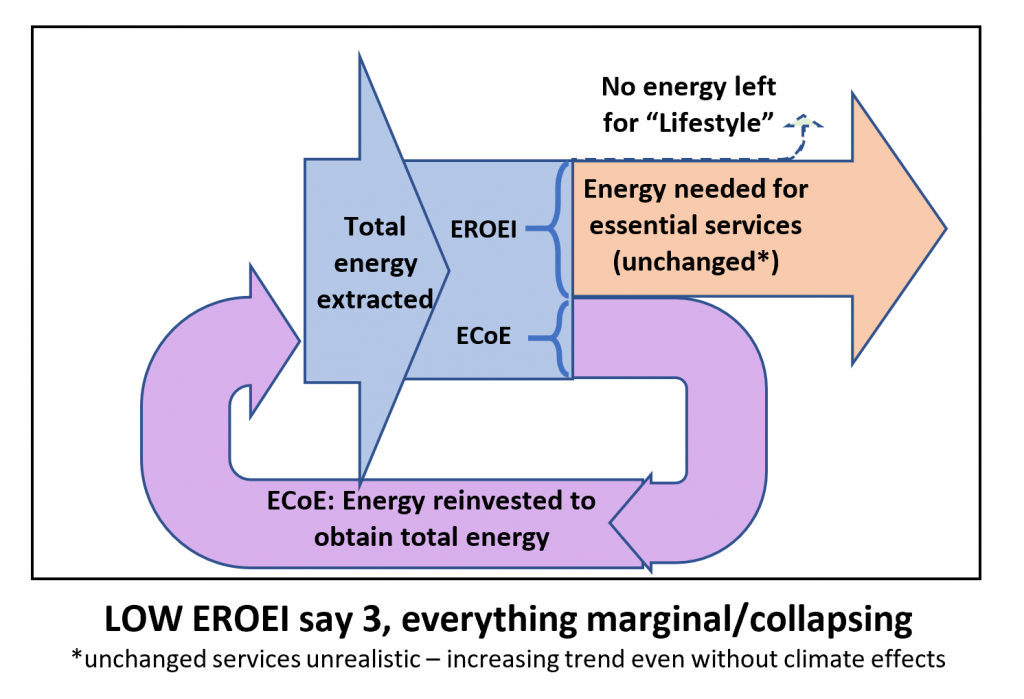 While each acknowledges that other issues, such as human culture, nutrient cycling, and entropy (among many others) can be important, each is of the opinion that it is energy itself,
and especially surplus energy, that is key.
Survival, military efficacy, wealth, art and even civilization itself was believed
by all of the above investigators to be a product of surplus energy.

The historical correlation of economic activity with energy abundance is clear, whether from firewood, horses, or even slavery (that horrendous engine of London’s 18th Century wealth). But the spectacular game-changer was fossil fuel, firstly coal (mercifully helping end slavery), then the astonishing energy density of oil (one litre of petrol providing energy equivalent to a month’s manual labour).

However, we commonly focus on the quantum of energy (e.g. oil reserves), but rarely on how difficult it is to extract. Energy economist and Life After Growth author Dr. Tim Morgan has termed “the killer equation” the relationship between the total energy extracted and the energy used to extract it. Ultimately, EROEI, or net energy gain, controls how much is available for society’s essential services, and then what is left for “lifestyle”

A big catch is that EROEI has been in long decline for traditional sources, and that of renewables (except hydro) is nothing exciting. The diagram shows our inexorable approach to the energy cliff, with potentially crippling constraints on energy, and thus economies.  Even where there are abundant reserves (e.g. oil in Canadian tar sands), low EROEI also means escalating emissions and environmental devastation for every litre reaching consumers. 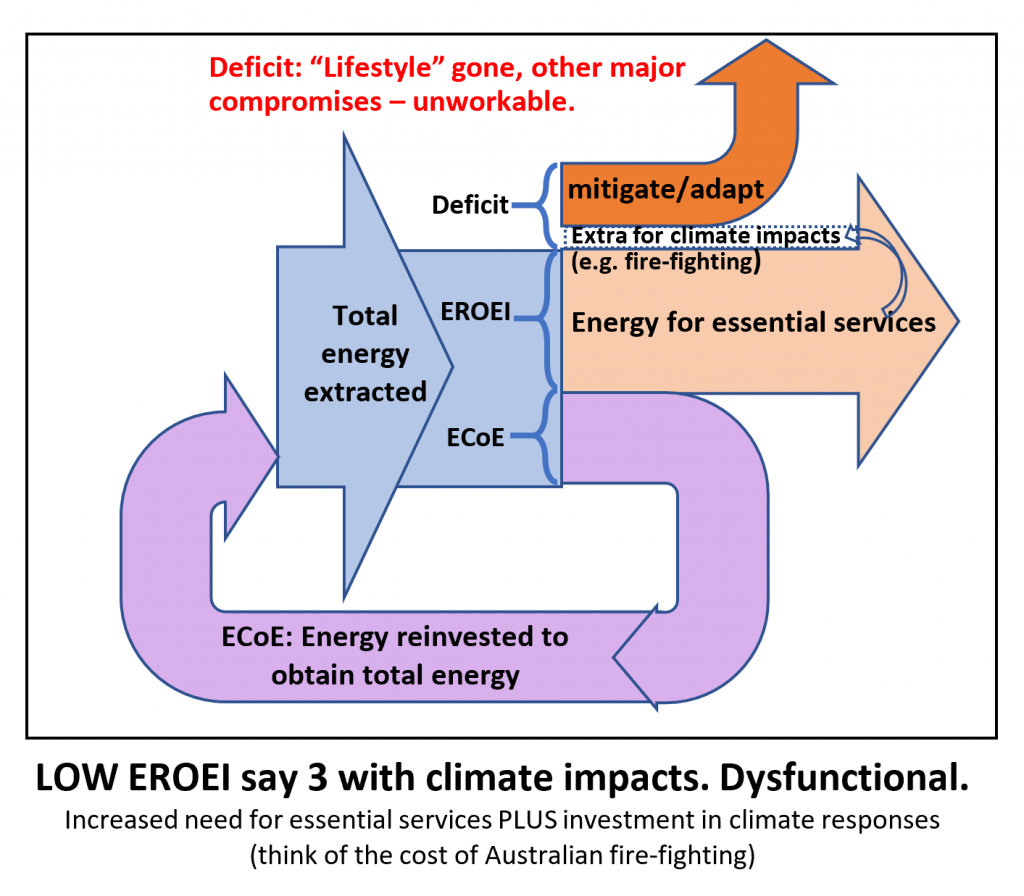 Even without EROEI, these present formidable challenges, but with increasingly marginal EROEI, this potentially leaves societies in energy deficit, with nowhere to turn, unable to complete critical work.

For a species habituated to trashing regional environments and moving on, this is our moment of truth, and it might come with a few surprises.

and rephrasing it as a fitting aspiration:

Let’s work hard at agreeing on relevant facts that will boost chances
of solving the climate crisis.

Lindsay Wood is founding director of Resilienz Ltd., and works full time on climate initiatives, especially on making the science and technology of climate accessible to government, business and the community. He “specialises in being a generalist”, and in connecting the dots between different disciplines and between different climate issues.

The breadth of Lindsay’s engagement is borne out by his frequent participation in climate-related activities, visits and conferences, and he is sought-after as a speaker and workshop facilitator.