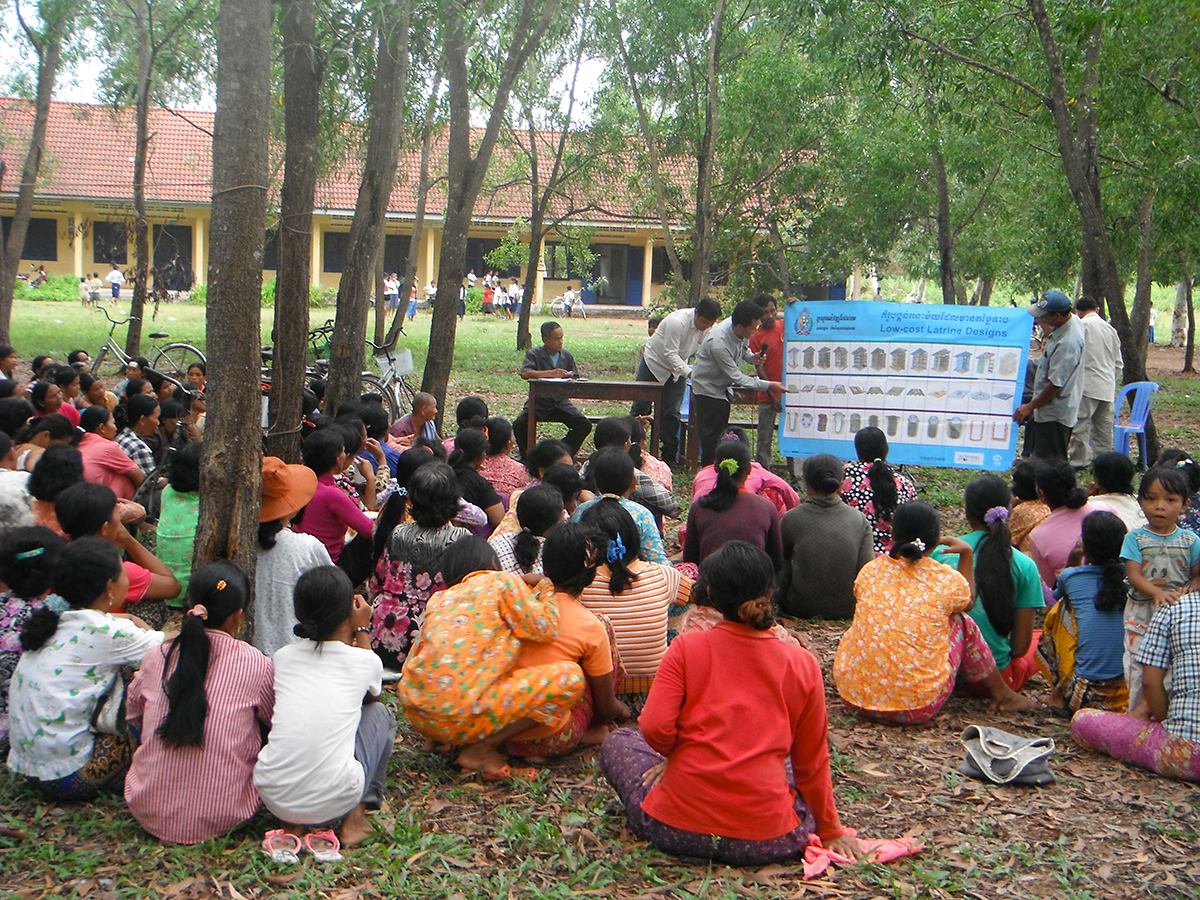 The ‘Sanitation in Challenging Environments’ programme came about from discussions between Engineers Without Borders New Zealand and Engineers Without Borders Australia professionals on placement in Cambodia. They were each working with different local organisations and each organisation was confronted by similar challenges and barriers to their work in increasing access to improved sanitation across a range of situations.

In 2013, with only two years to go, the millennium development goal for sanitation, to reduce by half the proportion of people without sustainable access to basic sanitation, seemed very far off. And the Cambodia National Policy for Water Supply and Sanitation target, that every person in rural communities has access to safe water supply and sanitation services by 2025, seemed very optimistic and quite daunting. With a current level of sanitation coverage in rural areas around 20 percent, the sector needed to construct around 140,000 household toilets every year to reach these goals, 100,000 more than was currently being achieved. A 2007 analysis of sanitation in Cambodia concluded that at current rates and with population growth, it would take about 30 years to reach the 2015 target, and another 150 years to reach universal rural sanitation coverage.

EWB recognised that while there are numerous and complex challenges for improving access to sanitation, the EWB sphere of influence and our skills are best focused in technical aspects. A 2011 study completed by the World Bank Water and Sanitation Program reported that “roughly 6 to 6.8 million people in Cambodia live in the defined challenging areas, some 43 to 49 percent of the population”. These challenging areas are defined as those with high groundwater levels, flood prone areas, stilted or floating households, and areas with sandy unstable soils along beaches and estuaries. In these areas, conventional sanitation solutions are not viable. So, in 2014, EWB began the Sanitation in Challenging Environments programme to tackle the issues of affordable and appropriate sanitation solutions in the many challenging environments and assist the sector increasing sanitation coverage. The programme aims to foster collaboration across the sector by facilitating partnerships, discussion forums and knowledge sharing with NGO’s and government across the sector. It also aims to facilitate innovation in whole-of-life solutions, to develop and trial new technologies, conduct research, and develop educational resources.

After operating successfully for over two years, the programme is making a difference to the lives of people living in challenging environments in Cambodia. “The Sanitation in Challenging Environments project is a good example of advocacy and action as it has raised the issue to national prominence. By bringing the key players together, we’ve raised the profile of Sanitation in Challenging Environments to the point where it has now been placed on the Cambodian Government’s National Action Plan, is recognised as one of the key components for the Cambodian Rural Sanitation and Hygiene Improvement Program and is championed by WatSan, a local forum for the Cambodian Water, Sanitation and Hygiene sector, as a key issue for addressing sanitation in Cambodia,” says Heidi Michael, EWB Australia International Program Coordinator.

With the success of the programme in Cambodia and strong existing partnerships, EWB Australia, EWB New Zealand, and Live and Learn Environmental Education identified the potential and opportunity for the Sanitation in Challenging Environments programme to be expanded into communities within the Pacific.

Vanuatu is an archipelago of 82 volcanic islands stretching over 1300 km and a population of approximately 283,000 people. At least 65 of the islands are inhabited and 80 percent of the population live in small villages that are scattered and separated over large distances. Inter-island and intra-island travel and communication are difficult and expensive. Most of the islands are steep, with rugged terrain, tropical forest, unstable soils and little permanent fresh water.

The challenging environments for sanitation in Vanuatu are similar to those in Cambodia, there are many areas with high groundwater levels, flood prone areas, and also many areas with rocky ground that is difficult to dig. Sanitation solutions must also be adapted for other challenges faced by Vanuatu, a lack of water, the rural and remote nature of communities and a high vulnerability to natural disaster.

According to the 2016 United Nations University World Risk Report, Vanuatu has the highest risk in the world to natural disaster. This means that it has a very high exposure to natural disasters and a high social vulnerability. 64 percent of Vanuatu’s citizens are exposed to natural hazards, including earthquake, volcanic eruption, tsunami, tropical cyclones, flooding, landslides and drought every year. Compounding this risk to the citizens, is the susceptibility due to the poverty level with roughly ten percent of the country living in extreme poverty. In addition, there are the challenges of responding to natural disasters, and the limited ability of Vanuatu to adapt and address the challenge of disaster prevention and relief.

Kicking off the Pacific Sanitation in Challenging Environments programme, EWB field professional Matt King was appointed as the first Sanitation in Challenging Environments project facilitator and technical mentor in Vanuatu. This placement is a partnership between EWB Australia and EWB New Zealand and is funded by the Australian Government Aid Programme. In late 2016, Matt spent two months with the current Cambodian based facilitators to gain an understanding of the programme and lessons learnt from the Cambodian context.

Matt is working within Live & Learn’s Western Pacific Sanitation Marketing and Innovation Programme. The core strategy of this programme is to enable local, community-based sanitation and hygiene entrepreneurism to create sustainable sanitation and hygiene services. This is being achieved by empowering local communities to establish and sustain sanitation enterprises and by creating an enabling environment in which these enterprises can operate and thrive.

Through their market research, the sanitation enterprises identified several sanitation products and services to offer within their communities. One new product they identified is the portable toilet which can be used as an indoor toilet for people living with a disability and is also useful in emergency situations as a temporary toilet. Matt and the construction teams reviewed current designs and identified how they could be modified to create a marketable sanitation solution for people living with a disability. In collaboration with the Vanuatu Society for People with Disabilities, and supported by Engineers Without Borders, the sanitation enterprises built and installed several toilets as part of a pilot study. The sanitation enterprises worked with members of each household to learn about their situation and modified and adapted the portable toilet to meet their particular needs.

For Anik, who is now able to use the toilet without pain and with dignity, the portable toilet has been life-changing. Five years ago, Anik had complications with her diabetes, which resulted in the amputation of both her legs below the knees. Her existing toilet was in a small shelter located about 15m from the house at the end of the section. The rough and uneven terrain meant that she was unable to access this toilet, instead, she used a small bucket in the corner of her bedroom. Anik told the sanitation enterprise that using the bucket caused her pain, discomfort and she didn’t like relying on family members to empty it after every use. When Anik was explaining about her current situation and talking with the sanitation enterprise about the changes that the portable toilet would make to her life, she burst into tears, and there weren’t many dry eyes in the construction team by the end of the visit! The construction team installed the portable toilet in a spare bedroom, complete with handrails and steps so that Anik could access it easily. When the team returned the next week to check in, Anik had made handmade some lovely cushions and asked the construction team to secure them to the steps to reduce the pressure and pain on her stumps. When asked how she felt about the portable toilet, her answer was “I’m so happy”.

The potential for the portable toilets and their importance has been recognised by the Department of Public Health in Vanuatu. During the recent volcanic eruptions of the island of Ambae, the whole population was evacuated, including over 800 people living with a disability. The sanitation enterprises were requested to provide over 65 portable toilets for use in evacuation camps until people are able to return to Ambae. They are now busy mass producing toilets and will be taking them over to Santo to assist the communities to set them up and conduct training on operations, maintenance and hygiene.

The increasing knowledge of the construction teams is helping the sustainability of the sanitation enterprises. They are not only improving their technical and management skills, but consistently applying a human-centred approach to the design. They are considering environmental impacts and risks and are putting the customer needs first to modify designs to ensure a good, safe and appropriate sanitation solutions for everyone, in every situation. Through technical capacity development and partnerships, EWB is strengthening local communities ability to drive their own development, and to build resilient and healthy communities.

Carys Everett is a Chartered Humanitarian Engineer with over 13 years’ experience in civil engineering, specifically water, wastewater and solid waste engineering. She is passionate about humanitarian engineering and community development, and can talk for hours about toilets and community water systems!

Carys grew up in a beautiful valley in North Wales, though thanks to an inherited travel bug and some itchy feet, she has worked on a wide range of projects around the world. Having made New Zealand her home base in 2007, she became the Executive Director for Engineers Without Borders New Zealand in 2014. Engineers Without Borders is a member based not for profit organisation with a vision that everyone has access to the engineering knowledge and resources needed to lead a life of opportunity, free from poverty.