Net Zero in New Zealand? Let’s first sort out what New Zealand should do, and wants to do.

The National Energy Research Institute (NERI) is working on an energy research strategy for New Zealand. This is both narrower than Net Zero in NZ (we exclude non-energy GHGs) and broader (we worry about risks beyond GHGs and include international activity). The comments that follow are limited to energy but could well be more generally applied.

We have approached the research strategy by looking out over time and identifying the significant risks and opportunities in the energy sector that are beyond business-as-usual (BAU) and are unique to New Zealand. We look at significance because most of the effort in this area simply catalogues every GHG source and gets lost in the detail. Looking at beyond BAU and uniqueness to New Zealand get us to the risks that are likely to be difficult to manage. This is where we need to concentrate our research investments.

Taking a risk management approach is basic. One thing about the future is that it is uncertain and in part unknowable. Research can help reduce the uncertainty, stress test alternative actions, and identify the policy levers to pull and the things to look out for as the passage of time brings the future into sharper focus.

Done well risk management will help identify the high gain, low cost activities to give priority to now; identify those activities where the balance of costs and benefits is less clear-cut and that warrant further work; and identify the pathways that are likely to be the most robust when the future is unknown.

I’ve indulged in these introductory remarks because scenario modelling like Net Zero in NZ isn’t the starting point for risk management. It lives in a deterministic world where the future is the product of the assumptions. In particular, it doesn’t start by asking the basic risk management questions: “what are the sources of the risks and what can we do to address them?”

Without this initial step scenario modellers can only do their best, which is what Vivid did. Their technical report of Net Zero in NZ sets out what they assumed, but the question remains: “Is this what New Zealand should and wants to do?”  This is the conversation we need to have.

Identifying the relative risks from GHGs in energy use is relatively straightforward.  We know fossil fuel use generates GHGs so if a sector is reliant on fossil fuels then that is where the most risks lie. 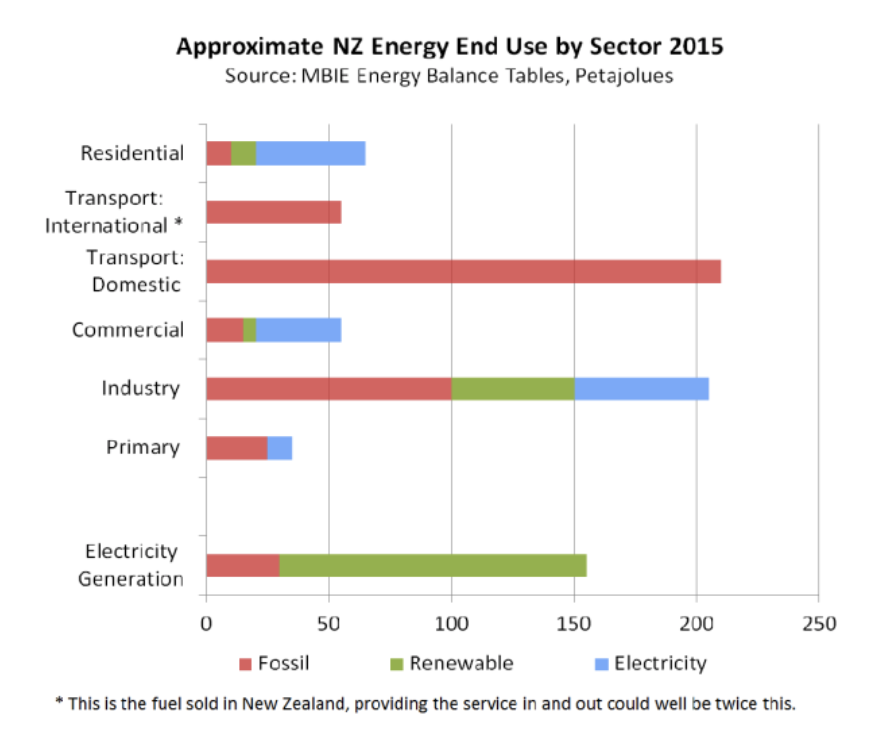 The biggest risk for NZ by far is in transport, with a significant chunk of that coming from international transport. The second largest risk comes from industrial processing (dominated by food and chemical processing), and the third from electricity generation (largely natural gas).  Together these amount to about 80% of emissions from energy. Here is the place to start.

In the case of food and transport, the risks are compounded because we are an island nation, distant from the world, that relies on trade and tourism. Low-cost efficient transport is critical, but so is acceptance by our customers of the quality of our offerings. The negative perceptions of high GHG use could bite well before any treaty obligations and a lot harder.  All these consequences of GHG emissions need to go into the risk assessment mix.

Surprisingly, a limited number of factors influence these areas of fossil fuel use.

We can start by assuming, as Vivid did, that low duty cycle transport in New Zealand will progressively head the electric vehicle (EV) way. This should happen pretty much under BAU even at today’s fuel prices and emissions charges (the Emissions Trading Scheme, ETS). In New Zealand, we are a lucky country in as much as we have prospective geothermal and consented wind generation (balanced with existing hydro) to provide the replacement energy. If we are smart we can deliver much of that electricity using our existing distribution system using spare capacity outside peak hours.

There is local work that needs to be done e.g. improving geothermal; better charging of EVs; the applications of ICT to travel e.g. trip optimisation, telepresence; attitudes to automation and shared vehicles, etc, but we could realistically see reductions of fossil fuel use in the order of 100 PJ p.a. (around 30% of today’s fossil fuel consumer energy use) over the next 20 years without too much trouble.  Because electric motors are much more efficient this energy would be replaced by under half that much electricity generation.

We could sweat the detail on industrial processing but the problem is the high levels of sunk cost by a small number of companies that rely on fossil fuels.  Replacing this capital early will be very wasteful, disruptive and may lead to the premature curtailment of relatively efficient and clean NZ economic activities that could simply lead to higher global GHG emissions.

So the most important thing for New Zealand is to make sure that the next investments use cleaner fuels. For the chemicals industry, this may mean different products from NZ’s resource endowments. While some might regard it as unsatisfactory, accepting a lag in GHG reductions until that happens should be a reasonable compromise. We will be better off using the remaining lifetime to lower the costs and improve the productivity of the next generation processes while investing in lower-hanging fruit elsewhere e.g. accelerating EV uptake.

This is a difficult area simply because as of today there are no obvious solutions that won’t break the bank. This is a problem we share with the rest of the world, although, as I’ve noted, NZ is relatively more exposed than most, so solutions are more pressing. Further, risk management is complicated by most transport technologies being outside our control.

On foreseeable technologies, the current default NZ strategy (drop-in biofuels) would require both significant increases in fuel prices (at a time when global demand for fossil fuels will be dropping and prices likely falling) and major changes in our land-use patterns.  On the other hand, the costs could be very high if our export and tourism markets move against us.

This is difficult. The Business NZ Energy Council scenarios suggest biofuels won’t happen under BAU and instead we will rely on sinks. Vivid very optimistically assumed increased levels of EVs (25-50%) and some shift to rail. Both groups assumed a not unreasonable 1.8% p.a. fuel efficiency improvement.

The obvious question is can we reduce NZ’s high duty cycle transport risks?

It is here that local research effort is needed. The starting point will be to assess the options for NZ, taking into account international trends. This will need to consider the drivers of long-haul transport and how these might change; the alternatives to it; the efficiency gains we can expect on BAU; the motive power technologies available; and the fuels and their supply chains. In scope will be issues such as advanced logistics, 3D printing, telepresence, drones, autonomous trucks and convoys, the complete range of potential motive powers across modes, and the necessary fuels (whether bio-derived or cleaner fossil). The work will need to link to international groups working in these areas.

Large investment in specific solutions (including high emissions charges) would be imprudent until this is done.  We need to better understand the risks and what we can do about them.

“100% renewable electricity” gets a lot of airtime even though fossil fuel electricity generation accounts for under 10% of our total fossil fuel use.  Looking under the bonnet the main reason we use fossil fuels for generation is that they are the cheapest way to service peak and intermittent loads. Renewable systems require valuable storage to meet this demand.

So the place to start reducing this is by flattening the morning and evening peaks in residential loads that drive peak demand. Like low duty cycle transport, there are obvious, low-cost ways to start tackling this, and serendipitously the batteries in EVs should be part of the solution.  Unfortunately Vivid did not get down to the level of looking at the peakiness of electricity demand, so their scenarios do not reflect these opportunities.

The remaining sectors: Primary, Commercial and Residential are much less of an issue.  Primary uses diesel; Commercial, natural gas followed by diesel; and Residential, natural gas and then LPG.  The drivers are low-grade heat loads and motive power, particularly in the primary sector. Over time at low levels of emissions charges substitutes are competitive and Vivid reasonably assumed very high levels of substitution.

Overall then we have only two difficult areas to address if we are to manage the risks of energy GHG emissions: (1) long-haul transport and (2) where-to in future investments in a narrow group of industries.  Both are of strategic importance particularly given that one of the industries is food.

We should focus on these as priorities and only return to scenario once we have a clearer idea of what New Zealand should and wants to do.

As a postscript on the pieces published so far, I’d reassure Barry Barton that doing in-depth analysis of the various emitting sectors is where the value lies and the government has been reasonably active in this area as the references in Net Zero in NZ attest (see also for example the series “Electric cars, solar panels, and batteries in New Zealand” undertaken by Concept Consulting that was co-sponsored by EECA). Rosie Bosworth’s plea for synthetic biology is of interest in liquid biofuels for heavy duty cycle transport. If biofuels are going to be cost competitive at lower levels of emissions charges they will need to be a co-product with high value, high volume products and plant-based protein foods might be a possibility.