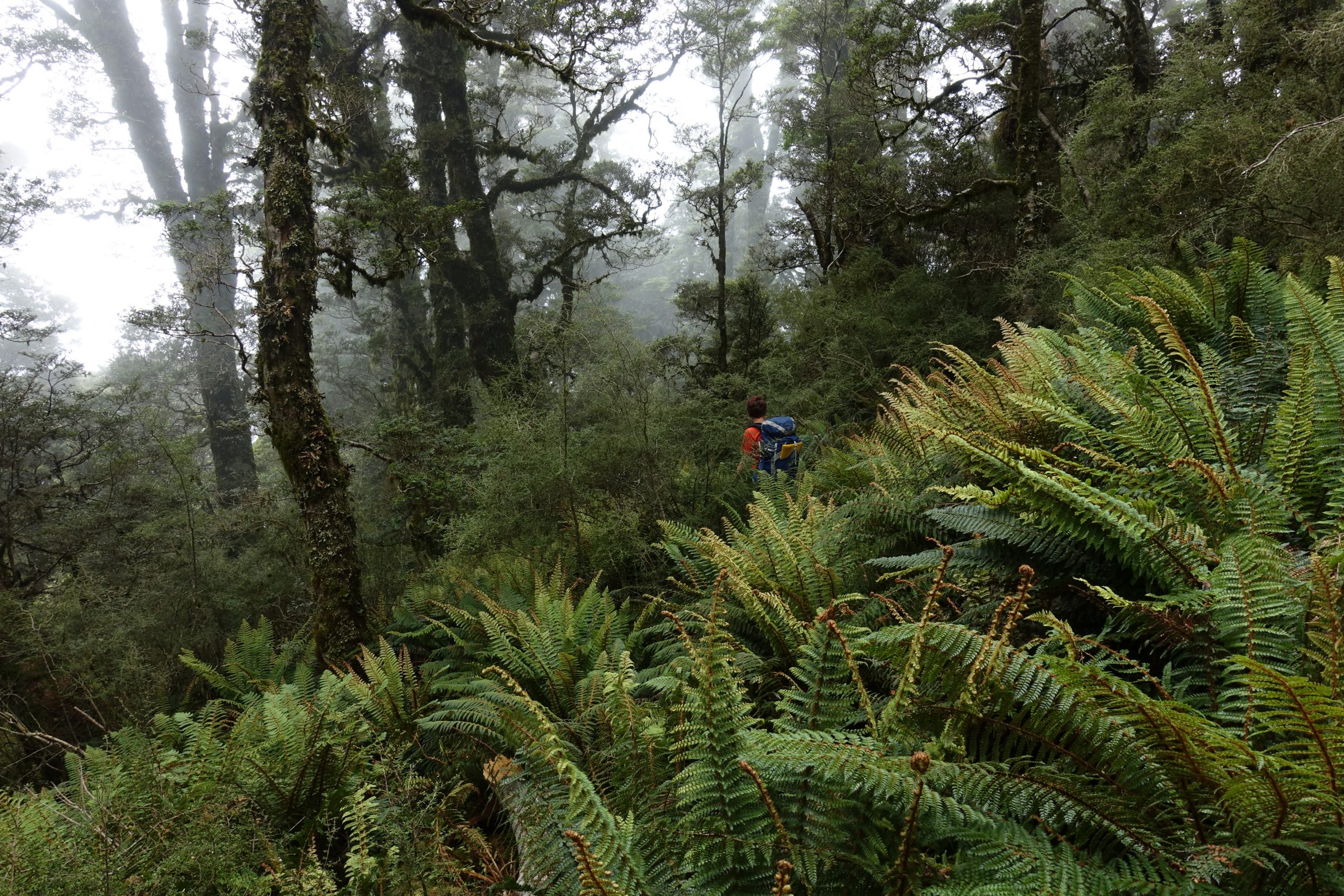 The Pure Advantages of Native Forests

Aotearoa/New Zealand’s native forests are unique and special in terms of their biodiversity and their contribution to all New Zealanders’ cultural identity. Our remaining native forests are still under serious threat; the author argues for nature-based solutions based round long-term, intergenerational thinking and putting people in the centre of the narrative about native forests.

Aotearoa/New Zealand was a predominantly forested country before people arrived. Forests extended to the limits of where trees could grow, and even some of the driest parts of the country, in Central Otago and across the Canterbury Plains, supported woody vegetation, albeit open woodland and shrubland. Non-forest communities were largely restricted to the mountain ranges, especially in Te Waipounamu/South Island, although sites recently disturbed by floods, landslides and volcanic eruptions would have been temporarily free of forest until succession saw forest dominate again.

Aotearoa/New Zealand forests are incredibly diverse in structure and composition, reflecting both our geological history and the climatic and topographical variability of the landscape. While ancestors of some of our forest biota are of Gondwanan origin, for many other species their ancestors reached Aotearoa/New Zealand through long-distance dispersal after the Oligocene marine transgression 25 million years ago. Whatever their origins, the plant, animal and fungal species we see in our forests today are very much the product of the environmental upheavals of the last few million years during which Aotearoa/New Zealand has experienced multiple glacial events and repeated earthquakes and volcanism.

Our forests did not undergo the relatively orderly advances and retreats that occurred in the Northern Hemisphere. Instead, small isolated pockets of forest survived at the height of glacial advances and quickly coalesced as conditions became more equable, before being fragmented again during the next phase of adverse conditions. This together with the incredibly dynamic tectonic environment, and our geographical location between the circumpolar westerly winds and subtropical cyclones, would have driven the evolution of our modern forest biota and the relationships that occur among its  species, collectively shaping forest composition and structure today.

Since humans reached Aotearoa/New Zealand our forests have been decimated, especially by fire and felling. These processes have now largely ceased and the absolute area of native forest is greater today than it has been for many decades. We also have a government agency tasked with specifically managing the majority of our native forests for biodiversity conservation.

But despite these factors, our remaining native forests are still being degraded. The ravages of herbivores (deer, goats, possums etc), predators (mustelids, rodents, possums etc), weeds and increasingly climate change are having massive impacts. While the effect of predators on forest birds are well known, the more subtle but likely more consequential and ongoing impacts of herbivores on forest composition and structure are often underestimated. Many of our smaller forest remnants are being invaded by weeds (e.g. blackberry, old man’s beard, ginger), although more extensive forests are still relatively free of their effects. And we are only now starting to appreciate the potential impacts of climate change – an example is the 2019 drought which left a salt and pepper pattern of dead trees through Nelson beech forests, forests which have existed there for millenia.

Exotic trees and forests have a long history in New Zealand and are important for a wide variety of reasons but they are not and can never be a substitute for native forests. Exotic trees and forests cannot provide the many values that native forests provide, especially cultural values, for biodiversity conservation and as long-term sustainable carbon sinks. The eminent Aotearoa/New Zealand ecological thinker and writer Geoff Park used the term Groves of Life in the title of his 1995 book on the history and ecology of lowland forests and wetlands (Ngā Uruora) to highlight their importance and value to Māori – something that exotic forests can never replace. Native trees and forests offer us, the people of Aotearoa/New Zealand, so many advantages over exotic trees and forests that any temptation to view exotic forests as a sustainable alternative needs to be quickly squashed.

Yes, exotic trees and forests do have important roles, especially as a source of timber for construction and other uses, but they can never replace native forests. Native forests are central to Māori whakapapa:  for Pākeha and New Zealanders of other cultures too, they are a key part of our cultural identity – how many New Zealanders would rank a pine tree ahead of pōhutukawa or tī kōuka as part of our identity?

The importance of exotic forests for long-term carbon sequestration has also been substantially over-stated. Because of faster growth rates, exotics and especially pines do sequester carbon more rapidly than natives in the first few decades after planting, but they mature quickly and their value as a carbon store declines, especially when they are harvested. Native forest is a long-term sustainable carbon sink that provides so many other advantages as well.

”Native forests are central to Māori whakapapa: for Pākeha and New Zealanders of other cultures too, they are a key part of our cultural identity

We urgently need to reframe the forest narrative in New Zealand to one that is focused on nature-based solutions if we are to address the many environmental challenges we are facing. Native forests provide so many advantages over engineered plantations or infestations of weedy exotic trees, and it seems odd that there is still a strong push from some for more exotic forests. But if we are to achieve the pure advantages of native forests for cultural values, for biodiversity conservation and for carbon storage, we need to focus in several areas including the following:

1. Reduce the pressure from herbivores on old growth and regenerating native forests. In landscapes used for pastoral farming, domestic animals can be readily excluded through fencing. In terms of game animals, the issue is more complex and doesn’t need to mean no deer, that would be absurd and would be an immense waste of resources, but instead we should work with hunting groups and mana whenua to find long-term sustainable outcomes that enhance the quality of our forests and provide for a sustainable hunting experience. 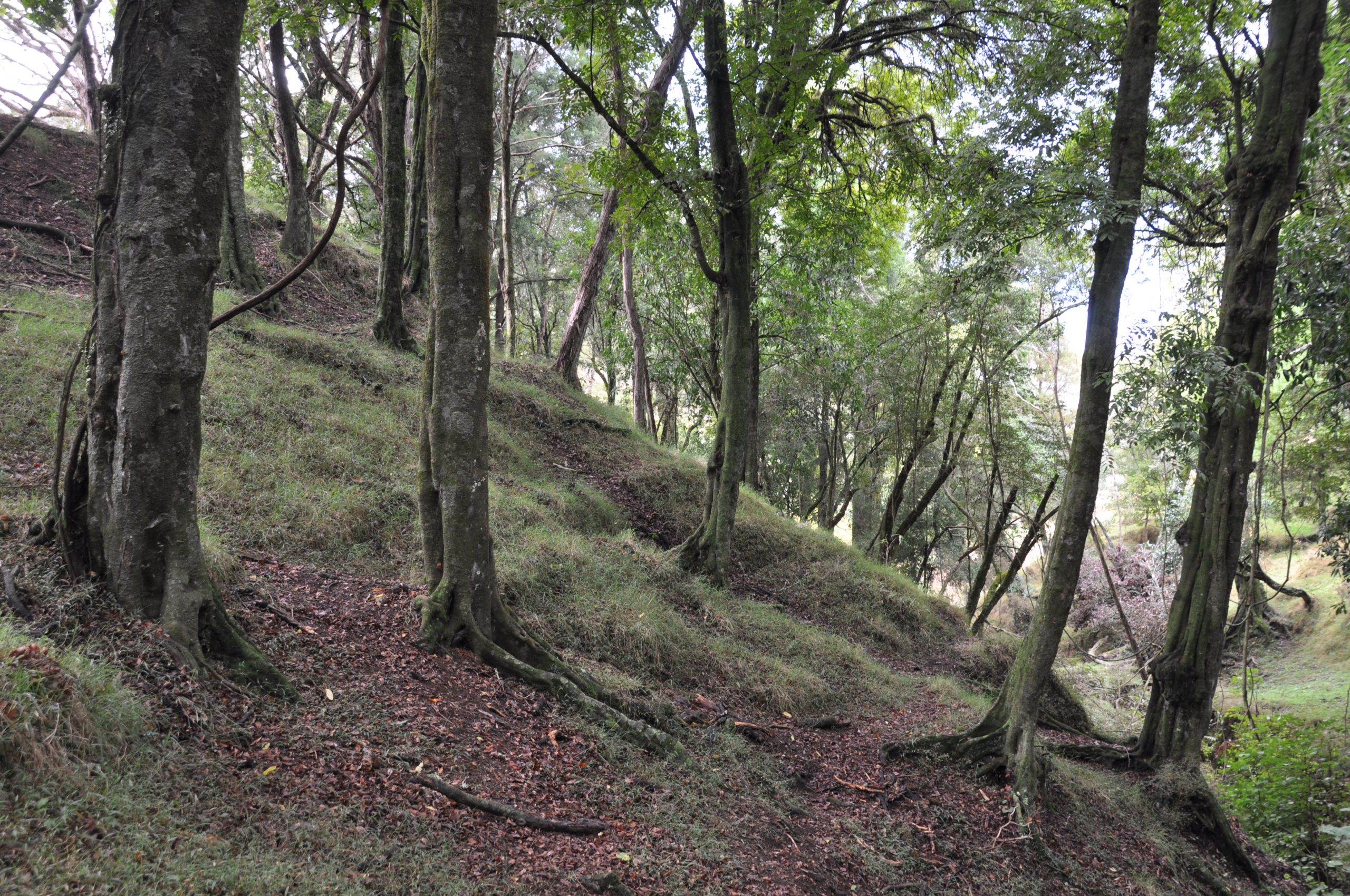 2. Substantially increase the area and quality of native forests through a range of approaches including targeted restoration plantings, enrichment of existing regenerating forests (including those with a strong exotic component) and especially facilitation of natural regeneration of native forests across rural landscapes. Restoration including natural regeneration needs to be undertaken in a coordinated manner that enhances landscape connectivity and if done strategically, can also tackle many of the weed issues native forest remnants are facing. 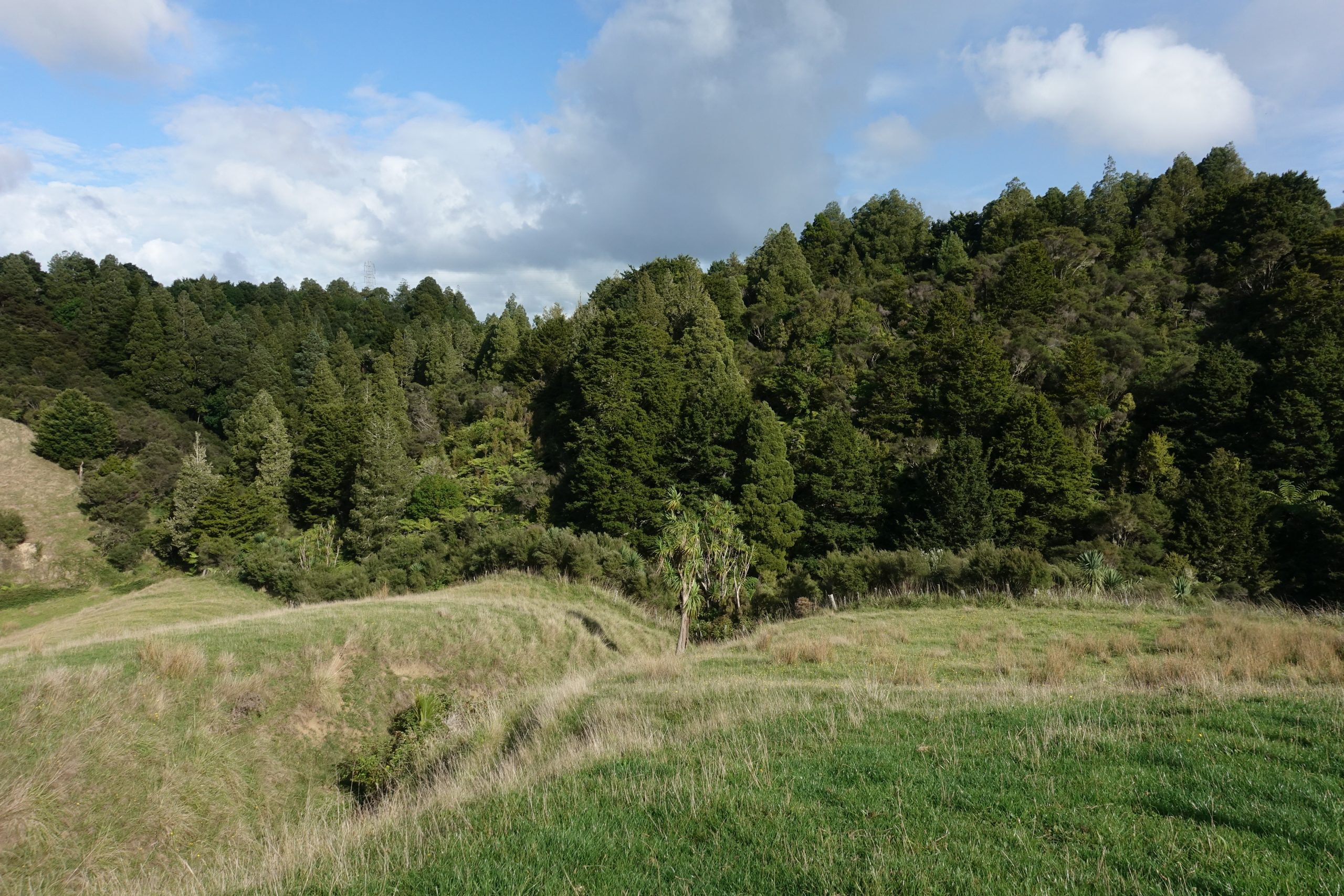 3. Substantially increase the presence of native trees across urban and rural landscapes as feature trees, in roadside plantings, in parks and reserves, for shade and shelter, in woodlots etc. It is Aotearoa/New Zealand where we live, not England or Australia and it is our native trees that are central to who we are as New Zealanders and should be at the centre of where we work and play. Increasing the presence of native trees outside of public conservation lands will help people reconnect with these amazing plants. 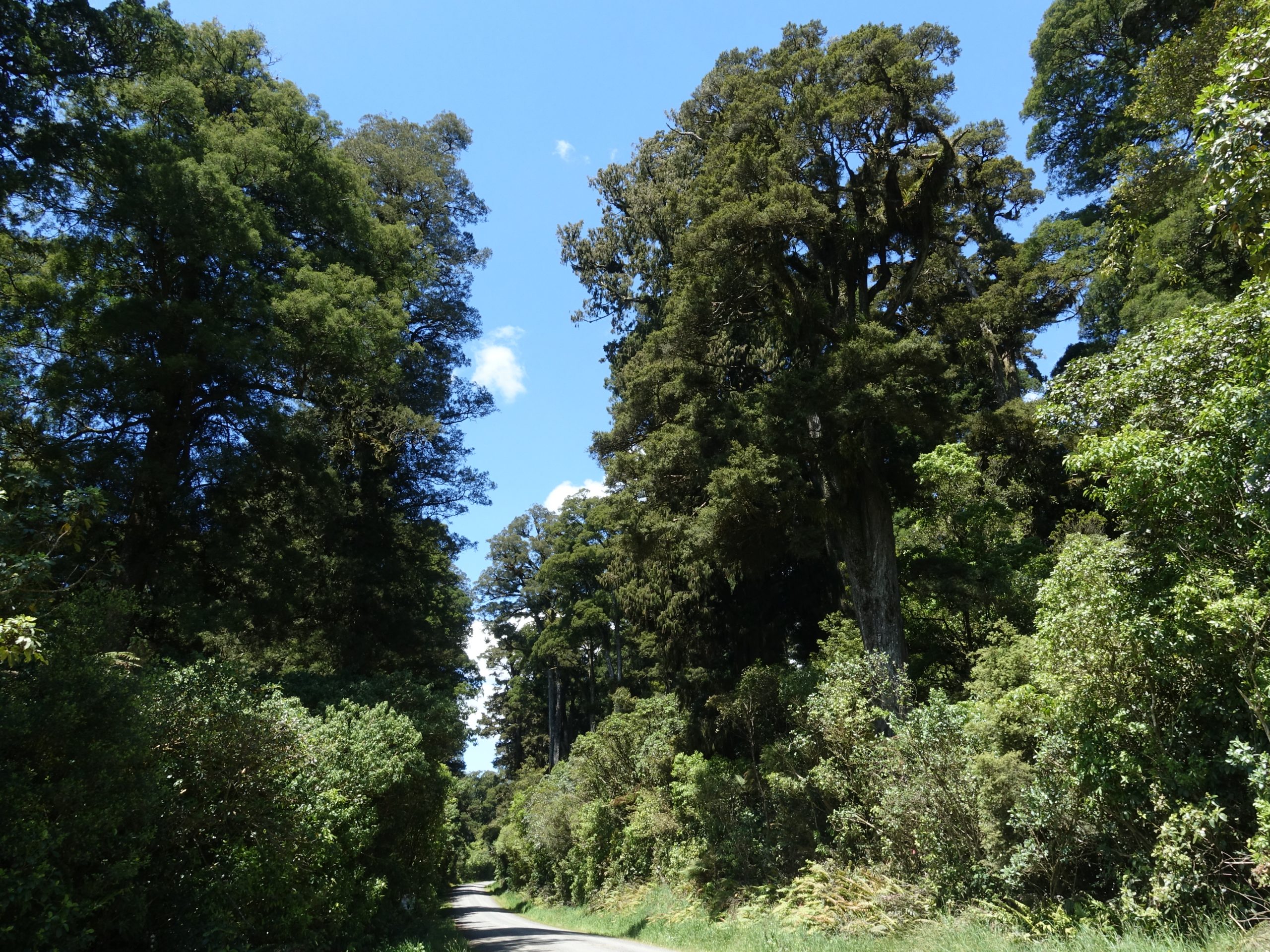 4. Not be afraid to make use of native forests for honey and timber, as a source of medicinal compounds (there is so much we still have to learn from Mātauranga Māori about the role of native plants and animals in rongoā), and for a variety of other uses we have not yet really thought about. And let’s financially incentivise private landowners to look after and expand native forests – it’s in everyone’s interest to do this! 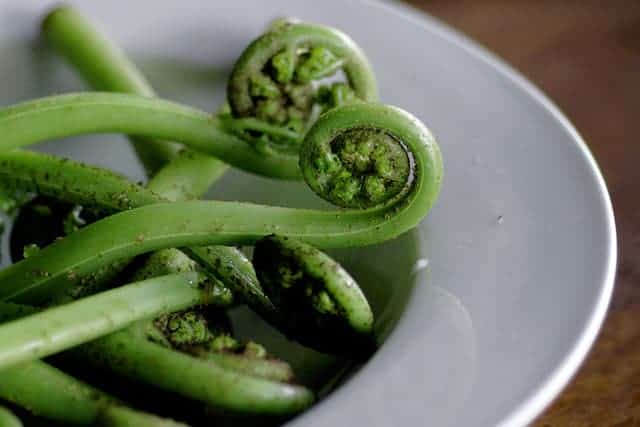 Native forests help define Aotearoa/New Zealand. From the mighty kauri forests of the north, the dense podocarp forests of Whiranaki and Pureora, to the extensive tawhai/beech forests of the south, native forests provide so many values to us, for our cultural identity as Māori and Pākehā, for the conservation of our unique native biodiversity and for carbon storage.

What would Aotearoa/New Zealand be like if these forests were empty, silent, no tui calling during the day or ruru at night?

What would Aotearoa/New Zealand be like if we didn’t have the yellow of kōwhai heralding the start of spring, the red blaze of pōhutukawa and rātā in mid-summer, and kahikatea laden with orange fruit in autumn?

What would Aotearoa/New Zealand be like if kererū did not swoop across our rural landscapes or korimako wake us in the mornings?

I am not advocating for Aotearoa/New Zealand to have just native forests and trees. Exotic trees are also an important part of our country and have much to offer us. But what I am advocating for is a much greater focus on native trees and forests, a recognition that what they offer us is special and unique and can never be replaced by exotic species.

If we are to truly realise the pure advantages of these forests today and in the future, then we need to think differently. We need to shift from short-term economic considerations (whether they be about timber or carbon) to thinking long-term and intergenerationally, we need to think about ecosystems as much as about species, and we need to place people in the middle of the narrative around native forests.

All New Zealanders need to feel connected with our native forests and trees, be involved in their management, and be able to enjoy and appreciate them everywhere in Aotearoa/New Zealand. Without involving all people, especially younger generations, we will never be able to restore the vitality and pure advantages that our native forests offer all of us.