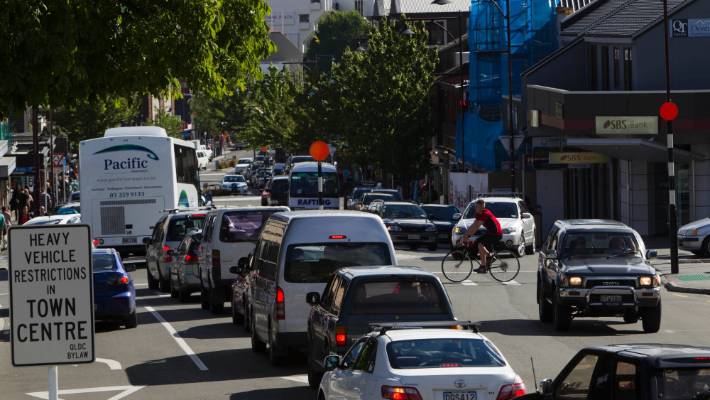 Many in Queenstown envisage a relatively car free town centre – see the Town Centre Master Plan – to allow maximum room for, and better quality experience of interaction, business and recreation. Congestion, lack of parking and general difficulties in getting from A to B are well known in the town and have been a focus of local discussion for many years now. It’s a hot discussion point in regional and national media as traffic on the main roads has increased by 45% over the past 3 years reducing once clear, serviceable roads to a slow, grinding crawl, and funding woes for solutions continue to delay progress agreed and planned by the local and regional councils.

Queenstown doesn’t look like much of a city yet, it’s better known as a tourism resort.  But, if you add permanent residents (about 20,000 in the urban areas) and the daily average visitor total (about 50,000) it is well into both city numbers and characteristics as defined by Statistics NZ.

‘A city is defined in the Local Government Act 1974 as an area that must have a population of at least 50,000 people, have a mostly urban character, be a distinct entity, and be a major centre of activity within the region.’

From a practical viewpoint, the area has a serious traffic issue with all of its major access roads either over, at, or close to capacity. It has a fledgling public transport system – so far only bus, but also some water based potential.  It has highly regarded recreational bike trails, but these fail to connect as commuter trails.  So, young people and old who are no longer driving, are often stranded in suburbs, which, because of a housing crisis, can be far from places of work, study and play.  This makes almost everyone heavily reliant on private cars for transport, whether or not they can drive.

Queenstown has a plan to improve.

The Queenstown Integrated Transport Strategy proposes several moves at a cost of around $500m. Who pays for this remains moot – the town expects the New Zealand Transport Agency to fund 80% of the plan, but so far, the agency hasn’t come to the party.

It’s an ambitious plan. Despite population and visitor number growth averaging probably 2.9% per year, this programme needs to deliver 7% fewer vehicles per hour down the busy SH6A known as Frankton Road by 2025. A road that has all but reached its theoretical capacity and vehicle numbers continue to grow – strategy or not.

The recommended programme is expected to improve the transport system through improved transport choice and level of service for all modes. Key outcomes by 2045 include:

It’s generally accepted that the strategy cannot be achieved without some serious mode shift.

To achieve mode shift we need to create other possible ways of moving about and to nudge people away from private cars with moves such as making it harder to use the car than take a bus or bike.  This is a big system and lots of actions are needed at a variety of intervention points.  One of those intervention points is the creation of pedestrian-dominated town centres.  This begins by firstly nudging people away from parking in town by making parking far more expensive than public transport or cycling.  This is a starting point for Queenstown that needs to be followed by gradually removing almost all private vehicle parking off the inner town streets.   Removing parking has several other benefits to other strategies as well – Town Centre revitalisation and liveability and climate change mitigation are examples.

A progressive political alliance elected in October 2015 promised a greener more liveable environment in the city – it faced massive growth projections and was keen to reduce its carbon footprint. (sound familiar?).  39% of the city’s CO2 emissions came from private cars (61% from all transport).

The government first tried to ban cars from its centre, but the backlash was so strong it did “the next best thing: it banned parking…”

Inner city residents were not happy when they were told their parking would be removed and be replaced with bike lanes. Nor were the conservative politicians – it’s worth hitting the translate button on this story to feel the real anger and concern in this 2015 article.

The conservative right considered the move ‘a declaration of war’ against a planned highway.

The strategy bans private cars but caters for ‘soft’ road users – cyclists, public transport, goods delivery, emergency services, transport for disabled.  It recognises the need to immediately use freed up space so this is turned into cycle ways where there was on-street parking, food courts and theatres where there were parking buildings.

Even electric private vehicles were banned. “The goal is that there should be no more space for cars, and an electric vehicle still takes up space,” – a quote from Lan Marie Nguyen Berg, a Green party politician and the city’s vice mayor for environment and transport in the Guardian story.

Oslo residents had not been known as great cyclists – mode share for bikes was just 8.3% and as the city got busier since 2001, the injury rate for cyclists had drastically increased. Bike paths were not well connected and it basically wasn’t safe to ride unless you were very competent and even then risks were high.

A plan to change that was backed up by incentives to literally, get on your bike:

“For those put off by Oslo’s hills, the council released 5 million Norwegian krone ($NZ860,000) to help citizens purchase electric bikes. This year, they’re targeting families with another money pot for cargo bikes.”

Oslo has had to make this change.  Since the mid 2000s it’s grown faster than other European cities and it largely dodged the financial crisis.  It has little space, and congestion has been increasing at high rates – travel time has increased by 30% across the network since 2008.

So how is it going, how are they tracking towards their goals?

This Fast Company story says it’s been a huge success.

“A few [parking] spots are left, converted into parking for disabled drivers or EV charging, and some streets are open for delivery trucks for a couple of hours in the morning. Emergency vehicles still have access.”

Oslo is not an Amsterdam or a Copenhagen, it’s not flat, its climate is at best, inclement. It was, previous to 2015, a city dominated by the private car and suffering the pollution and disconnection that that brings.  A critical step in their strategy was to upend the transport hierarchy, placing pedestrians at the top, then cyclists and public transport, with private cars right at the bottom. This commitment was backed up with massive improvements to public transport and by making cycling safe and comfortable.

Business concern about drops in patronage have been unsubstantiated with the pedestrianised areas becoming the most popular parts of town.  The city is trying to make it easy for people to live without private cars and this is reflected in new developments – these have little or no car parking on-site.

“I am absolutely certain that in the future, the private car will take up much less space in the cities, I hope that other cities will be inspired by us to create their own car-free city center. I think this will become an increasingly important issue as we see more and more clearly that letting private cars take up so much of a very limited space within city centers is just not very efficient. At the same time, we are learning more about how pollution affects those of us who live in the cities, especially children. A couple of decades ago, it was perfectly normal to smoke cigarettes inside. Today, very few would do that. I think it’s the same with cars in the city center: One day we will look back and ask ourselves why we ever thought that was a good idea.”

But it’s not been easy, and the city has not been able to implement its entire plan; it was just too fast and there was too much opposition.  The car free zone is smaller than envisaged, the bike lanes not as good as hoped, and biking still isn’t as safe as it needs to be.  However, the forward momentum has traction and the doom predicted by the nay-sayers has failed to come to pass.

So, what can Queenstown learn?

And while we’re at it, let’s pop a wee bit of research in here.  A 2017 Norwegian peer-reviewed study showed that “access to private or reserved parking triples the likelihood of car ownership.”

So if we want to reduce cars, reducing parking is a great step.

In Queenstown, we also need to:

Get the Otago Regional Council fully engaged with our direction and, as the agency responsible for public transport, to provide a much, much quicker response to the demand. Unlike Oslo, Queenstown doesn’t have self determination over its transport – it has to work with ORC and NZTA which makes things slower and harder than they need to be.  Some would argue we need those checks and balances – I like checks and balances, but not hindrance of an agreed vision.

Recognise and empower the Queenstown Trails Trust (declaration:  I am the Queenstown Lakes District Council appointed trustee of this organisation) to secure the easements and the funding it needs to build the trails. Funding needs to come from New Zealand Transport Agency as the financier of our national transport (not just roads) network and MBIE as support for visitor impact.

More about Oslo and its suitability as a model:

We have many of the same drivers of change – rapid growth, congestion, deteriorating journey time, deteriorating environment and high levels of polluting, inefficient private car use.

Queenstown is ready and poised to achieve its vision:

So can we please just get on with it?

The barriers as I see them:

Oh, and btw, if we committed to smashing those barriers, we wouldn’t be alone. Lots of cities and towns are emulating Oslo as they work towards car free centres and futures. Here’s a story about 12 of them.