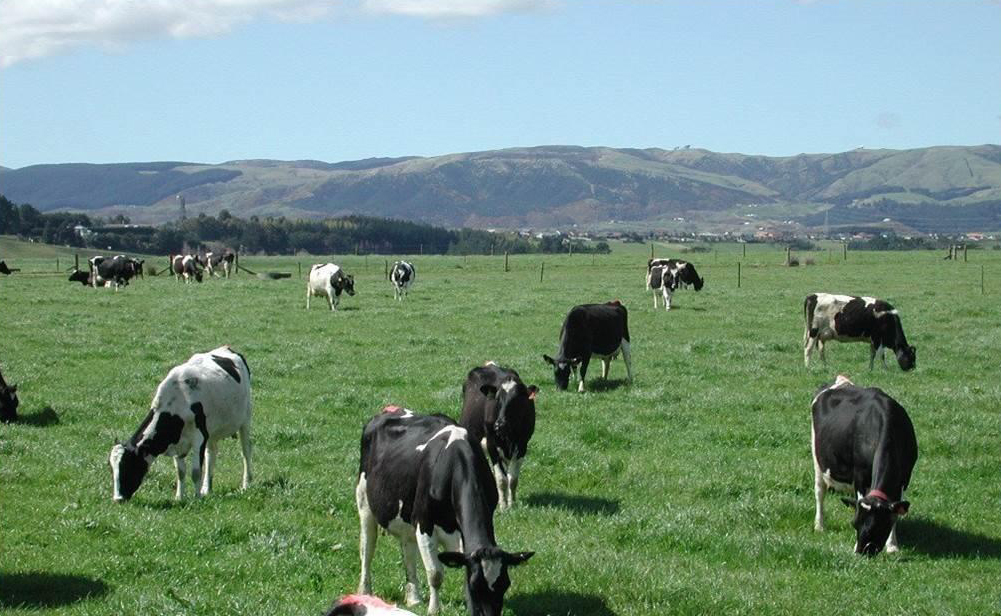 Agriculture accounts for about 18% of global methane emissions, but in New Zealand agricultural methane emissions make up 38% of our total greenhouse gas emissions, mainly from enteric fermentation and manure management, (about 97 and 3% respectively). This is why there is a continuing need here for research to find ways of reducing our agricultural emissions. While good progress is being made, no practical technologies are currently available. As methane is a powerful greenhouse gas that warms the atmosphere at least 30 times more effectively than carbon dioxide, and has a much shorter lifetime in the atmosphere, it is an attractive target for reduction to curb global warming. Globally, there are also natural sinks that destroy methane. Complex chemical processes in the atmosphere provide the main sink, but soils also represent a small but useful biological sink, and this is where my story with methane begins.

In 1995 I made the first measurements of methane consumption by New Zealand soils – initially in the UK at Rothamsted Research, because at the time we lacked a suitable analytical laboratory at Landcare Research to measure it accurately. These first measurements showed that some soils had exceptional appetites for consuming methane. In fact, one beech forest soil in Canterbury was found to be one of the strongest consumers of atmospheric methane in the world. Further research on other New Zealand soils from pastures and forests showed not only that our forest soils gobbled methane more effectively than did pastures, but also that the bacterial communities eating the methane in soils under these two land uses were different.  We also found that these methane-eating bacteria (methanotrophs) were more active in volcanic than in non-volcanic soils, mainly because volcanic soils allow air to flow more freely – this is important because methanotrophs are aerobic bacteria, so they can only function in well-aerated environments.

Soon after the turn of the millennium I began to consider the possibility that picking the right soil might offer a way to intercept on-farm methane emissions. At this point I was joined by a small group of colleagues who were keen to help. This is also when serendipity had a key part to play – a Canadian research group in Vancouver at the University of Victoria learned from a visiting New Zealand colleague what we were planning, and offered us the use of some gas monitoring equipment that had been gathering dust in their laboratory. There would be no charge, provided they could collaborate with us to develop the idea further. We enthusiastically agreed, and one of my electronics-savvy colleagues went up to Vancouver to pack up the equipment and send it to Palmerston North. Over the ensuing weeks we assembled and tested the equipment, and, with modifications, began a series of experiments to test the capacity of selected candidate soils to consume methane.

While volcanic soils from forests did show some promise as methane consumers, the breakthrough came with the realisation that soils exposed to high methane concentrations might harbour very active populations of methanotrophs. We approached the Taupo District Council about testing their landfill, which had been capped for about 8 years by a local volcanic soil, to reduce odours and control rodents. They generously allowed us to take some samples of this soil cap over the decomposing waste, and when this soil was tested in our laboratory in Palmerston North, we found it could consume huge amounts of methane.  What were these super-methanotrophs?  Our Canadian collaborator is a molecular biologist and a methanotroph specialist, so he was able to help us answer this question. While they found that some of the “super” methanotrophs in our volcanic soil were new to science, the main reason the methanotrophs consumed large amounts of methane  was that an enormous population had developed in the soil cap over the decomposing waste in the landfill – a familiar scenario in all ecosystems where food becomes plentiful.

At this point we had to decide whether to focus on trying to reduce emissions from housed animals, where methane from both enteric sources and animal waste was being emitted, or instead focus on stored effluent, which produces large plumes of methane as well as ammonia and odours. For funding reasons we chose the latter, and aided by on-going support from Landcare Research, and some funding from MPI, we built our first prototype methane biofilter beside a Massey University dairy farm effluent pond and tested it at small scale. This comprised a column of our methanotroph-rich volcanic soil, through which methane-enriched air from the effluent pond was passed to allow the methane to be consumed by the methanotrophs. We were able to confirm the concept worked very well, and could easily consume the large methane emissions being produced from the pond. This first biofilter was run continuously for nearly 5 years, consuming methane as well as ammonia emissions and odours. We also found little maintenance was required.

Could this be a viable technology if scaled up to full size? The short answer at that time in 2012 was “no”, mainly because the biofilter would need to be much larger (about 50 cubic metres), and we would also need to cover the whole pond, at considerable expense. 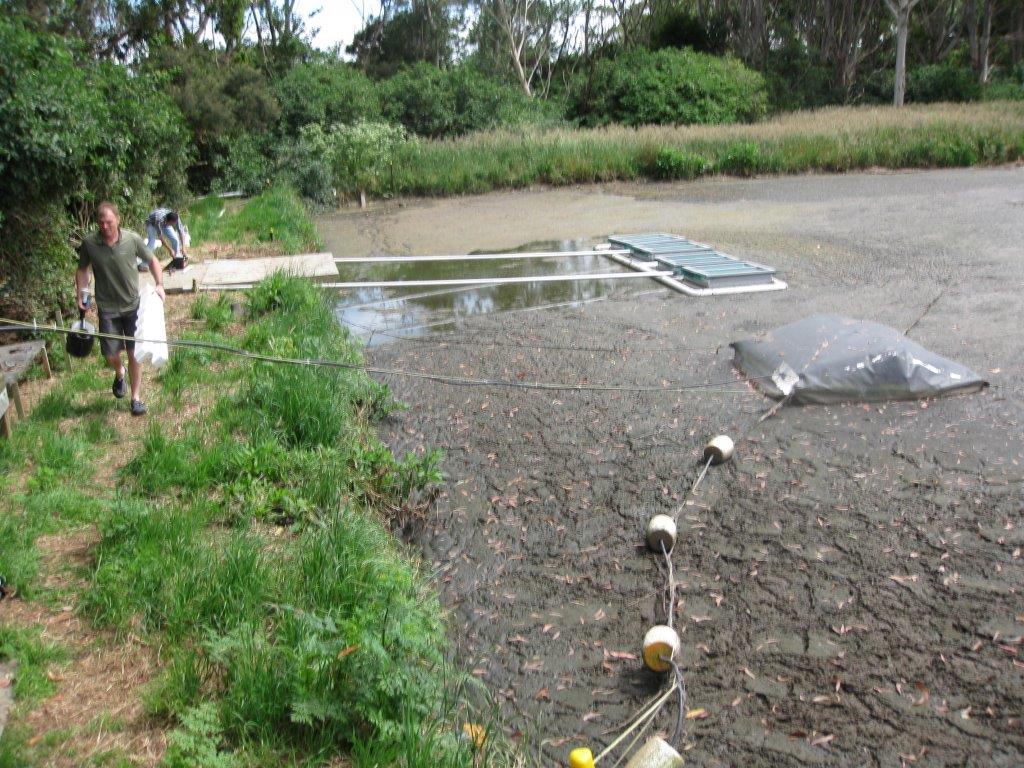 So we began testing the idea of using a biofilter that floated on the effluent pond, comprising a thin layer of methanotroph-rich material suspended above the pond. This type of biofilter needed much less methanotroph-rich soil, and the whole pond did not need covering as the tapered sides of the pond meant methane production did not occur near the pond edges (see schematic diagram ). These attributes would allow the farmer to easily access the pond liquid to irrigate his pastures without disturbing the biofilter. 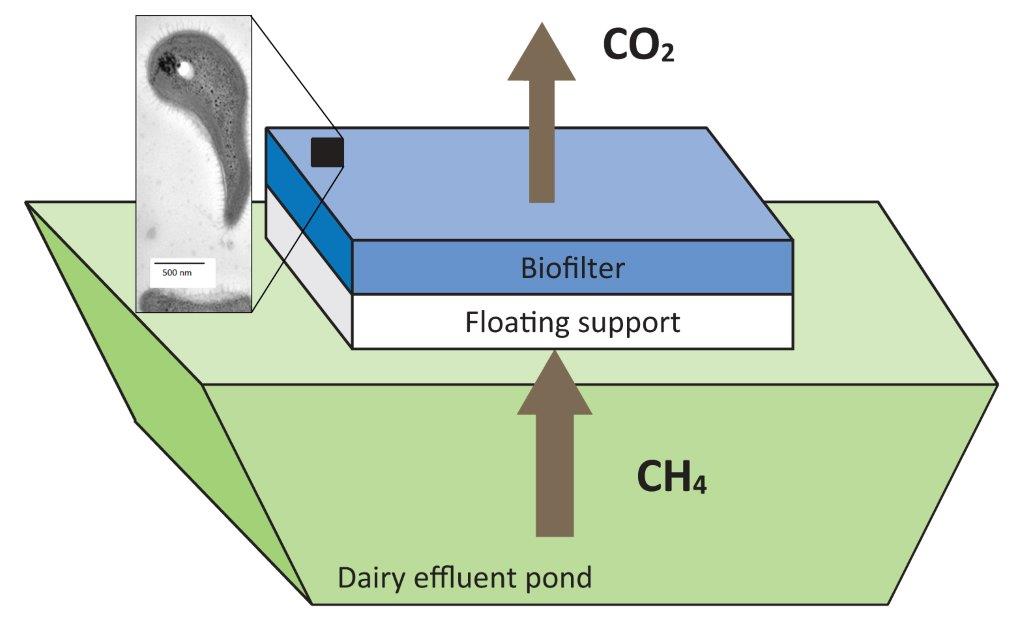 The insert in the schematic (above) shows one of the methanotrophs that consume methane, which is then converted into more methanotrophs, organic matter, and some carbon dioxide; the white spot is a bioplastic (polyhydroxyalkanoate) stored as a food reserve from consuming  the methane -another example of how potentially useful  soil microorganisms can be in a low-carbon world.  Once again, the floating biofilter worked well over one year, consuming 70-80% of the methane entering the biofilter. At the same time as this experiment was being conducted, a PhD student funded by a Landcare Research scholarship was developing a better understanding of the methanotrophs doing most of the work, so their management could be optimised for maximum methane consumption by the biofilter. However, a review of this novel technology in 2014 concluded it was probably not economically viable. This conclusion was predictable, as there are currently no incentives for farmers to do anything to reduce their methane emissions.

A new experiment is currently being run with funding from the NZ Agricultural Greenhouse Gas Research Centre, to test our original idea for capturing both enteric and effluent methane emissions from housed animals. The idea is that with minimal cost a farmer could use a fan in the barn to gently deliver methane and ammonia- enriched air to a network of pipes buried in the soil beside the barn. Over a few weeks the methanotrophs present in this soil would adjust to the higher methane load and consume it. Early results for both gases look promising. If successful, this much simpler technology could be attractive not only to some New Zealand farmers who periodically house their animals, but also internationally, where housing animals for prolonged periods is more common.

The crucial climate change meeting of world leaders in Paris is now behind us with ambitions to keep the increase in global mean temperatures at or below two degrees by 2100. It may not be all some environmentalists, scientists and countries wanted – but it is a deal that opens the door for innovation and investment to reduce emissions and help us move away from carbon based fuels with a roadmap for communities and countries to follow.

However, stronger signals on agricultural emissions by the New Zealand government would be needed in order for methane mitigation technologies like our biofilter to become commercially viable and attractive for farmers to use. Although the biofilter represents only a small step, in the absence of any “magic bullets” for reducing methane emissions from our dairy farms, each small step will be critical in creating a climate-smart agriculture future.