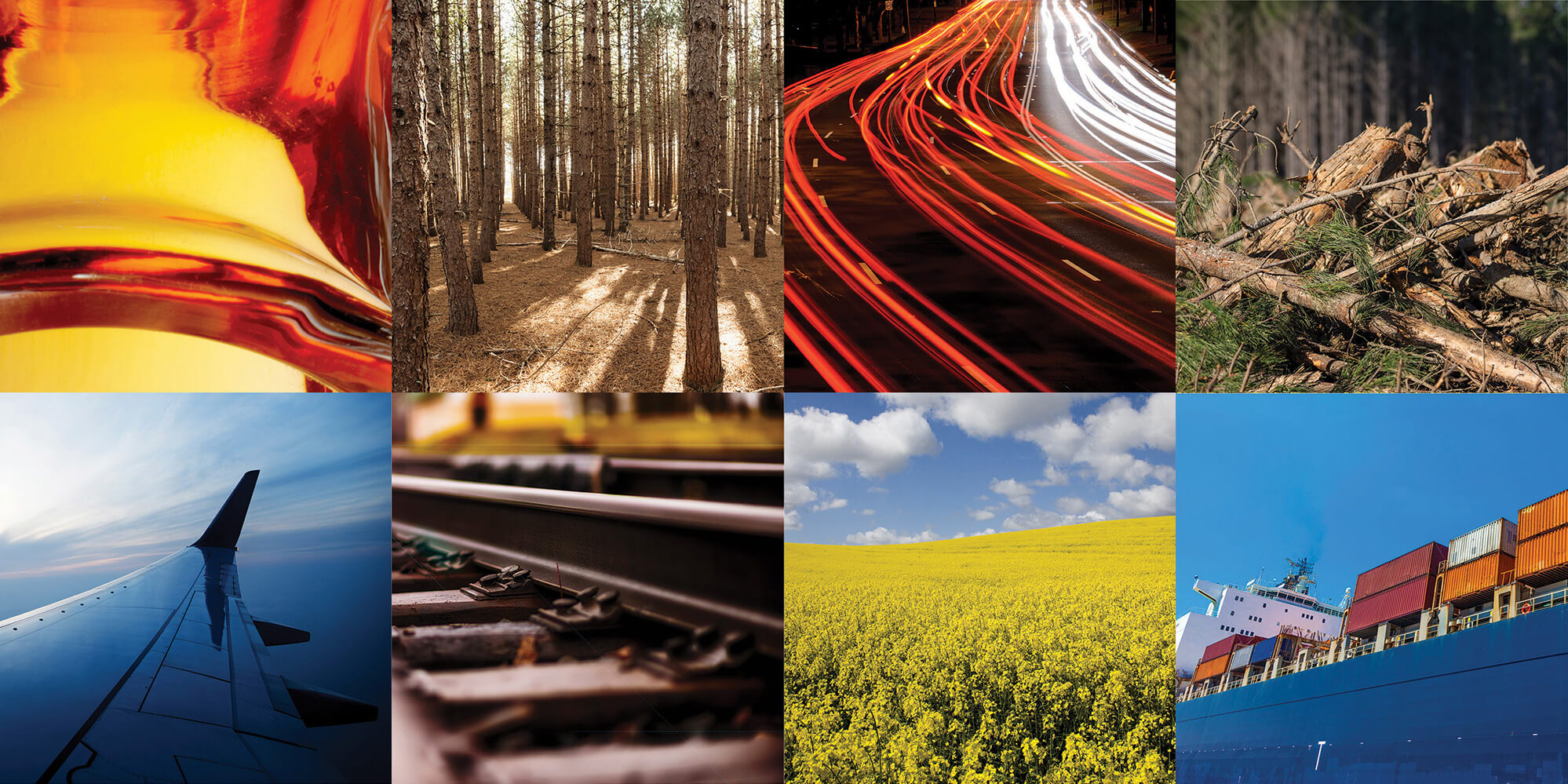 Treesel isn’t a word – yet. But tree diesel powering the country is within our reach according to the New Zealand Biofuels Roadmap, a new study by Scion bioenergy specialists.

Increasing the use of biofuels in New Zealand will bring benefits. Our greenhouse gas (GHG) emissions will be reduced and it will be easier to meet international commitments such as the Paris Agreements, and New Zealand’s Net Zero target by 2050. The growing and processing of feedstocks for biofuels is also expected to boost economic and employment growth in the regions. The country will need to import less fossil oil, making New Zealand more energy independent. And our goods and services will continue to be able to access international markets as ‘green pressure’ (the demand for reduced carbon footprints) grows.

The study builds on earlier work looking at what our options for growing and processing feedstock crops into liquid biofuels on a large scale might look like. Dr Ian Suckling, the study’s technical leader, says the team wanted a way to explore different futures using a wide and unbiased set of variables.

“Our objective was to consider the effects of different combinations of feedstocks, technologies and fuel mixes. Overall, we wanted to come up with multiple possible futures that would inform and stimulate debate around biofuels, rather than make recommendations,” said Ian.

There is no broad consensus on biofuels in New Zealand. This only compounds the difficulties of establishing a brand new, large and complex biofuel value chain that involves considerable technical risk over several decades.

The sheer number of options available meant the Scion team had to carefully consider the scope of the study. After discussion with stakeholders ranging from forest growers to fuel distributors to government departments, they focused on the production of liquid biofuels from sustainable feedstock, excluding fuels that would require new or modified engines. They also decided to focus on large scale deployment and use of biofuels, which excluded one-off opportunities in specific locations.

Conversations with stakeholders, technical knowledge and international trends suggested that ‘drop-in’ fuels that can be used in current engines without modifying them were preferred for ease of distribution and use. Petrol is a possibility in the short term, but the growing use of electric vehicles for personal transport will decrease the demand for it with time. Diesel for heavy transport, marine oil for shipping, and jet fuel for aviation – applications that are energy-intensive and hard to electrify – were thought to have long term potential.

The roadmap team chose the Bioenergy Value Chain Model (BVCM) to visualise alternative biofuelled-futures. The model was developed by the Energy Technologies Institute in the United Kingdom and modified for use in New Zealand. It considers the entire value chain, from where and when to grow a wide range of feedstock options, which processing technologies and where to site them and fuel mix, then balances these variable to find the lowest cost solutions for different scenarios.

Biofuel substitution at the relatively high level of 30% by 2050 is just one possible future. In one scenario, the BVCM model was given the latitude to use any combination of feedstocks, technologies and final product mix to calculate the lowest cost solution to achieve this 30% substitution. 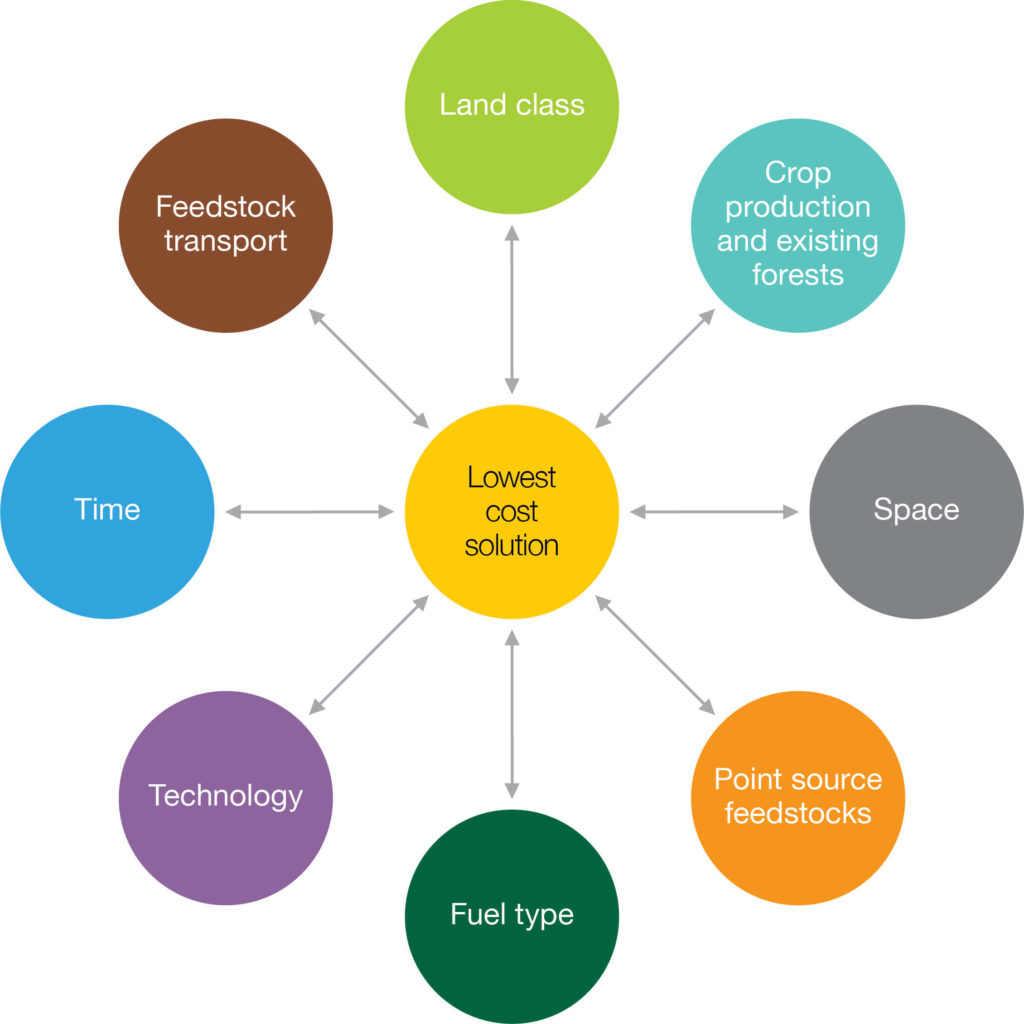 If all land classes can be used to grow feedstock, the model uses canola seed, energy crops such as willow and miscanthus, existing and new forests, and forest residues as the main feedstocks to produce biodiesel and drop-in petrol and diesel. If the land available was restricted to just non-arable land, growing and harvesting canola and energy crops is no longer possible and the feedstocks would need to come from existing and new forests and forest residues. The fuels produced would be drop-in petrol and diesel.

The energy crops and forests would be grown mostly in Northland, the East Coast, the central North Island and Marlborough/Nelson, areas with available, inexpensive land, and climate conducive to fast growth. Processing would take place close to the feedstock sources.

The technology chosen by the model as having the lowest cost is a combination of pyrolysis, where feedstock are broken down by heat to produce a ‘bio-oil’, followed by upgrading the oil to produce drop-in fuels. Pyrolysis is a commercially proven technology but upgrading has only been demonstrated on a pilot scale to date.

Assuming we only use non-arable land to grow energy feedstocks, new energy and conventional forests would need to be planted, increasing the area in planted forests by around 25%. Translating this to an area like the East Coast this would mean planting around 80,000 extra hectares (or a 50% increase in planted forests in the region) and building four pyrolysis plants and four upgraded plants with an input of around $1 billion in capital and the creation of 1000 jobs.

In terms of wider benefits, 30% substitution using non-arable land would reduce New Zealand’s GHG emission by 5 million tonnes a year (compared with 2015 levels) and reduce the amount of fossil fuels we need to import by 30%.

The team have run more than 50 scenarios including looking at the effects of targeting specific fuels like jet fuel, one of the few ways to decarbonise the aviation sector. Specifying jet fuel increases cost as the current technologies are more expensive. However, it is unlikely just one type of biofuel would be produced. Most drop-in in biofuel technologies produce a mixture of petrol, diesel and jet fuel, reducing the overall cost.

How can we make it happen?

As a country, we need to talk! Are we serious about reducing GHG emissions, becoming more energy independent and growing regional economies? And which of the options for a biofuelled economy would suit New Zealand’s needs best? Which biofuels? Is it acceptable to use arable land and/or food crops for producing biofuels? What level of fuel substitution should we target? And when do we want to achieve this by?

A biofuelled future is unlikely to happen by itself. Leadership at a national level is needed. There has to be national commitment to doing things right. The investment needed is large and stakeholder industries will need a degree of certainty when committing to feedstock and processing options, as well as taking ownership of delivering their parts of the value chain.

If conventional forests are identified as the best feedstock option we need to start planting now to supply the feedstock needed for future fuels.

With the right will, Scion’s study and the Bioenergy Value Chain Model, New Zealand can now explore different options and plan the way forward to a sustainable future. 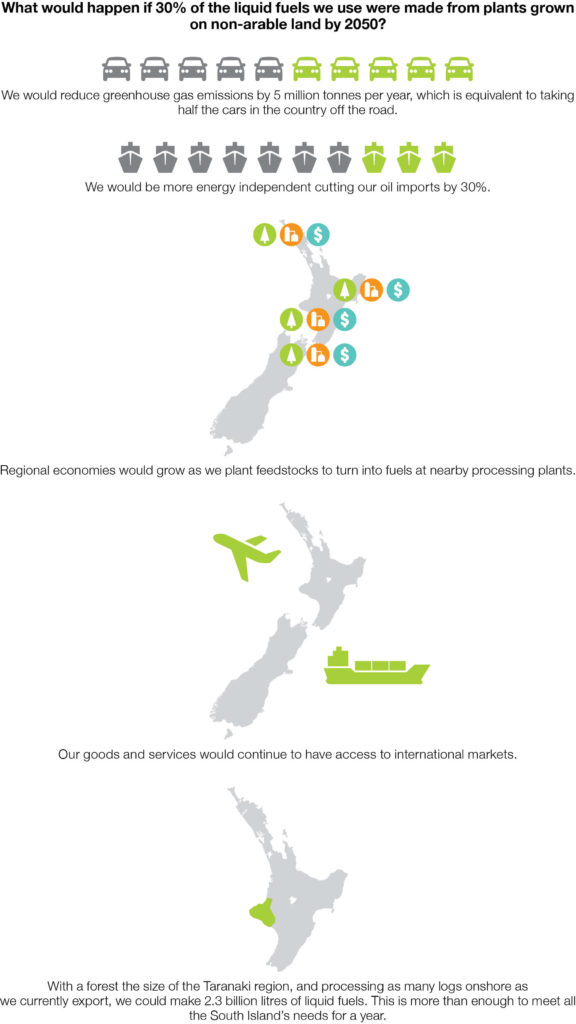