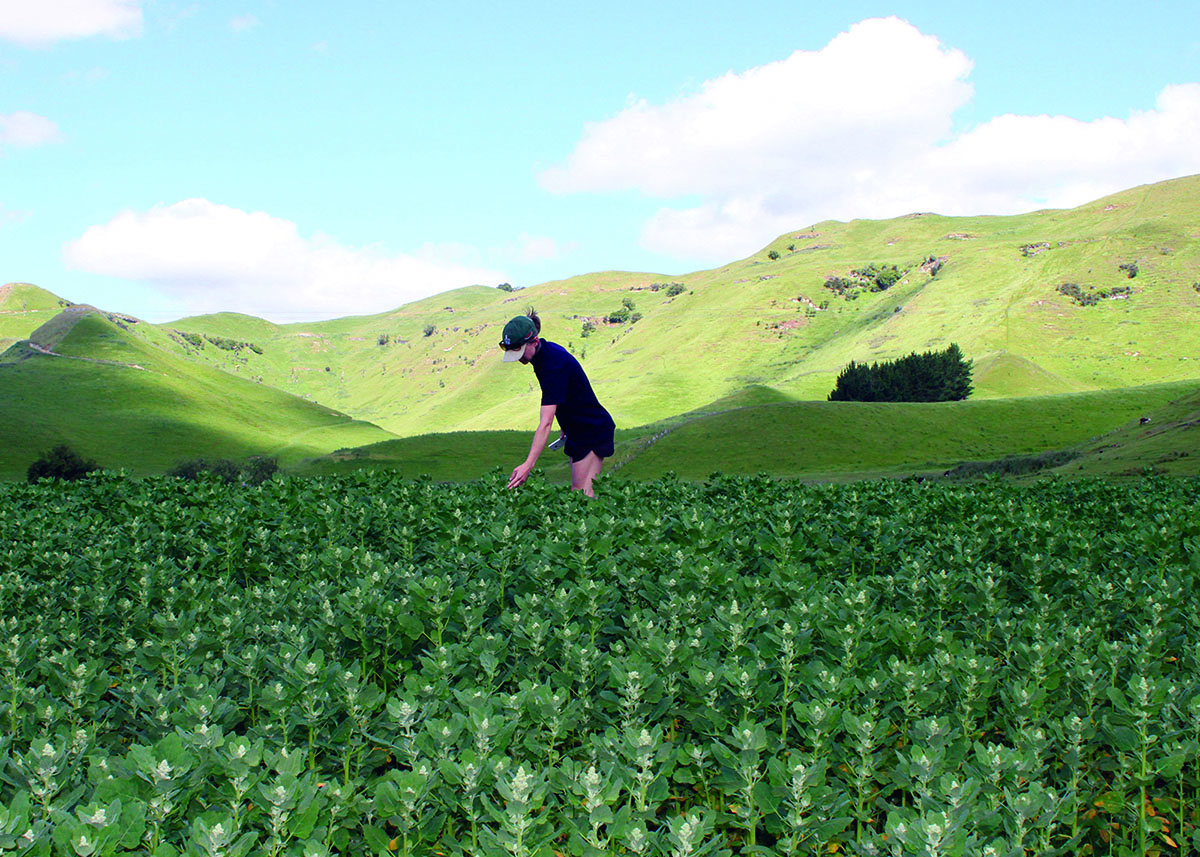 Sheep and beef farmers Dan and Jacqui Cottrell are diversifying the protein portfolio of their Taihape farm, becoming the first New Zealanders to commercially grow the on-trend plant protein quinoa.

Bolivia and Peru are the main global exporters of quinoa, producing more than 80% of the world’s crop, however growing demand over the last ten years has encouraged a massive expansion in the number of countries testing the grain in their home soils. Just 8 countries were growing quinoa in 1980 but by 2015 this had grown to a whopping 95. Despite this huge growth the Food and Agriculture Organisation of the UN still considers quinoa to be a massively underutilised food source. It named 2013 the Year of Quinoa to promote the grain. That was also the year that Dan and Jacqui Cottrell started seriously contemplating the idea of growing quinoa on Dan’s father’s sheep and beef block in Taihape.

“The idea or ‘light bulb’ moment occurred while my wife Jacqui and I were on our OE, traveling through South America,” describes Dan. “We noticed that the quinoa-growing regions of Peru bore quite a resemblance to Taihape. In a wider sense, the idea formed through both of our interests and backgrounds – Jacqui’s career as an agronomist for Abron, a biological fertiliser company, coupled with her passion for nutrition, and my background in rural finance and growing up on high altitude farm.”

“We researched the idea at length over the internet, from agronomy through to the technicalities of post-harvest production and the more we looked at it the more we realized it was such a huge opportunity, especially given that no one was really considering it in New Zealand. We trailed a number of varieties in 2013 with varying success and the following year I travelled to Europe to meet with the plant breeders of the most promising varieties and visit other quinoa producers in the UK. From there we imported an initial seed supply of 45kgs which was the first generation of Kiwi Quinoa.”

Kiwi Quinoa was born when they planted their first crop in the spring of 2015. Weed control quickly emerged as a significant hurdle. 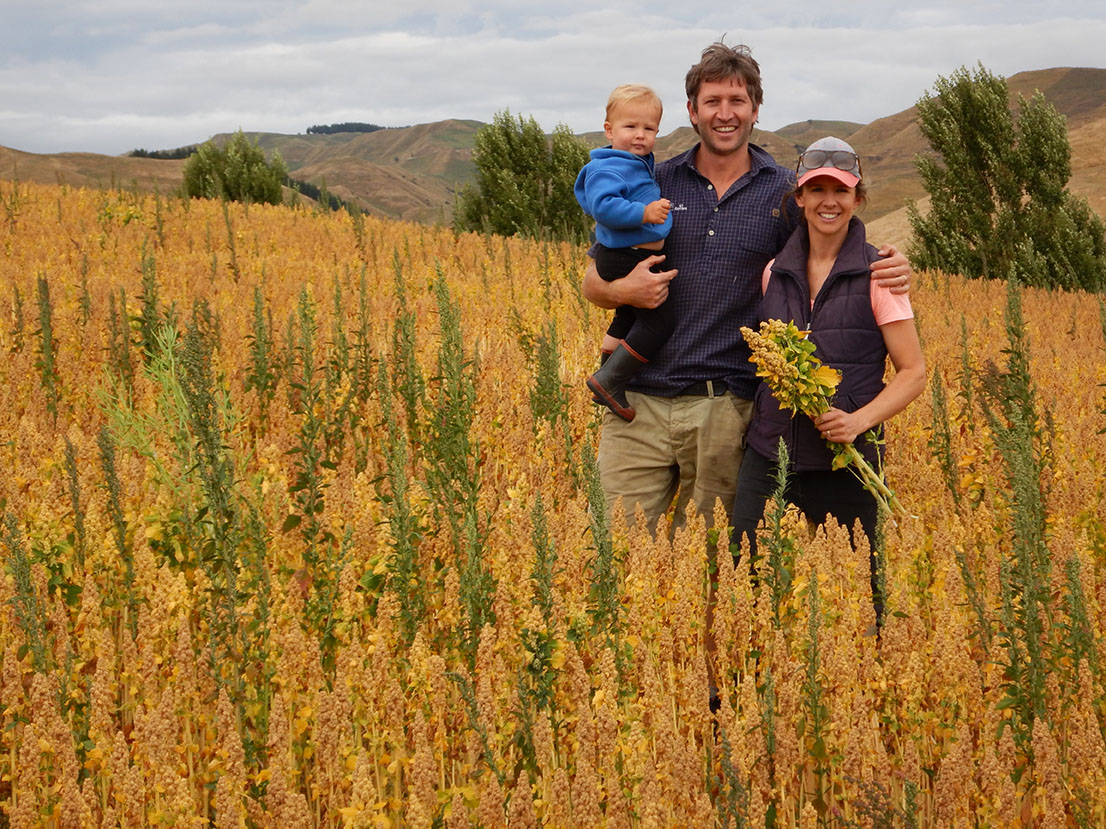 “A majority of our initial trials were overrun with weeds and had to be abandoned. Quinoa is technically a broadleaf weed, closely related to fathen (Chenopodium Album), one of the most prolific weeds on New Zealand farms. We are growing the crop without herbicides, basically because almost everything will kill quinoa. As a result of this, we have had to work out how to grow it fairly organically.

Our farm is not a certified organic operation and we do not have any desire to make it so, being predominantly a hill country sheep and beef operation. In order to go down the organic route, our stock numbers would have to be drastically reduced which I know would not be economic given two generations are living here. Decades of weed control, specifically gorse would also suffer and we would lose a significant area of production to thistles in the summer months. In saying this we do take a very measured approach to chemical sprays, namely the two annual sprays for these weeds and I am a firm believer in what decades of science has achieved in the animal health side of things. Again going organic would rule out a lot of these tools. In saying this we take pride in growing the quinoa without herbicide and pesticide sprays, or irrigation”.

The couple’s instinct that the Taihape altitude and climate would suit quinoa have been well founded, and the crop is now flourishing. Dan and Jacqui were careful about which variety of quinoa to grow, sourcing a variety developed in Europe to enable a shorter growth season.

“Our variety which we are growing on license is a relatively short variety at a four month life cycle, shorter than spring sown wheat or barley for example. As we are largely a pastoral based livestock system, we are using the quinoa crop to renovate pastures, meaning we are ploughing up old pasture in spring, growing and harvesting the crop in summer and re-sowing in new grass and clovers. We have tried minimum tillage but the quinoa did not fare well. The main reason for this is that we mechanically bury the weed seed bank in the soil and this helps us from a weed control perspective and as we are cultivating ‘virgin ground’ we are unlocking a lot of the nutrients in the soil profile. This has resulted in relatively high yields compared to the straight cropping systems in Europe and Australia where quinoa is used as a break crop for cereals.”

“Crop inputs are fairly comparable to cereals from a fertiliser perspective. We add a few extra nutrients and trace minerals that are beneficial for seed production and everything is tailored to the soil test results. We measure nutrient levels, pH, trace elements, CEC, base saturation – basically the industry standards set by Hill Labs. Our organic matter levels are high due to the farm being largely pasture and not annually cropped. A major focus of soil testing is the soil pH which holistically is the best example of overall soil health due to its promotion of bacterial activity, worm life and nutrient availability.”

Dan explains that one of the huge advantages of quinoa as a crop is its ability to grow in dry conditions. 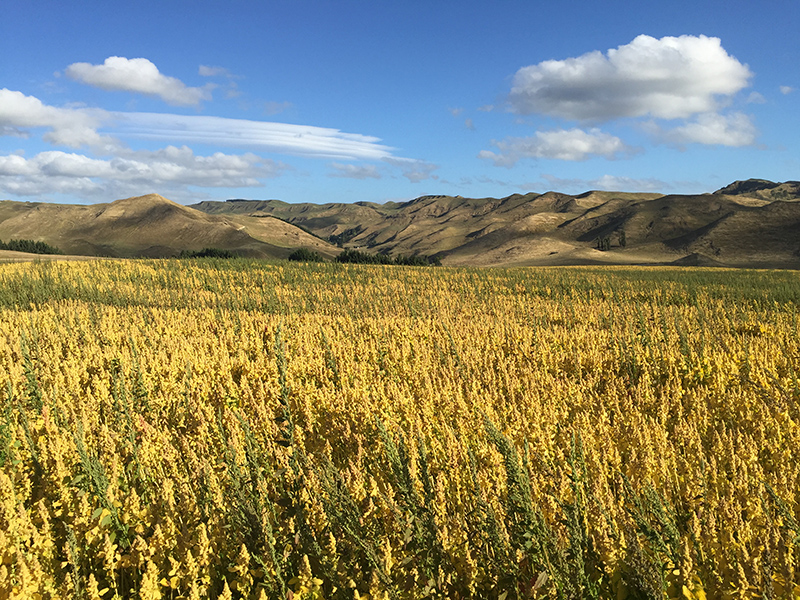 “Importantly the water requirement is less. We are growing this without irrigation and it is thriving here. Quinoa is recognized for its water use efficiency and ability to bounce back after dry periods.”

Working out how to grow the crop on a commercial scale has lead the Cottrell’s towards their next major challenge – working out the supply chain for their product. “It’s an ongoing challenge,” says Dan. “Edible seed production is fairly new to New Zealand and the lion’s share of the seed industry is based in Canterbury. Having said that, uptake has not been a challenge and we can’t supply enough at present!“

Initially restaurateurs snapped up all that the Cottrell’s could supply, however with the expansion of production from the 20016/17 growing season, they have launched retail packs which will soon be available through Sabato, Ooooby, Moore Wilsons and Farro Fresh among others.

“It is still early days,” says Dan. “We have only been growing quinoa for three years including one year of trials. This season we are increasing acreage five-fold and this will be our third year of growing it commercially. We are still finding new markets and are at the stage where customers are coming to us, which is nice. We’re focusing on growing production to meet demand and focusing on being the primary producer. We have been in contact with other businesses who focus on value-added quinoa based products so we’ll see where that takes us.”

Dan and Jacqui say that what makes them most proud about their fledgling business is the product itself.

“This years crop was around 25% higher in protein than imported quinoa and we’ve found it is more user-friendly in the kitchen and doesn’t go gluggy. There is a scientific reason behind this: our quinoa is whole grain. It has not been polished, washed or processed as it does not contain bitter saponins found in a vast majority of other quinoa varieties. This is due to plant breeding programmes dating back to the 1990’s in Europe which have resulted in a number of commercial varieties which are grown on license throughout Europe, the US and now here in New Zealand. The absence of saponin in our quinoa side-steps an expensive step in the supply chain and is a primary reason we have been able to make a business out of this.”

Dan attributes their willingness to take the leap into commercial production with a fundamental belief that the New Zealand agricultural sector needs to diversity from the current high volume/low value business model.

“As red meat producers we know that we produce the best quality meat but we get frustrated by the need to convey this message to the world in a better way. Our beef and lamb are premium grass-fed products desireable around the world but this message isn’t being sold well enough. As farmers, who have traveled and worked throughout the world and had previous careers in both wider agricultural industries and outside of agriculture, we believe we have quite a lateral view of farming. It is clear to us that there is an opportunity to grow a diverse range of both new and existing crops alongside our high quality traditional meat and dairy products.”

There is an evident pragmatism to the Cottrell’s approach – an even-handedness which celebrates the best of NZ’s traditional farming production while at the same time looking forward to meeting the needs of a growing low-methane protein market. 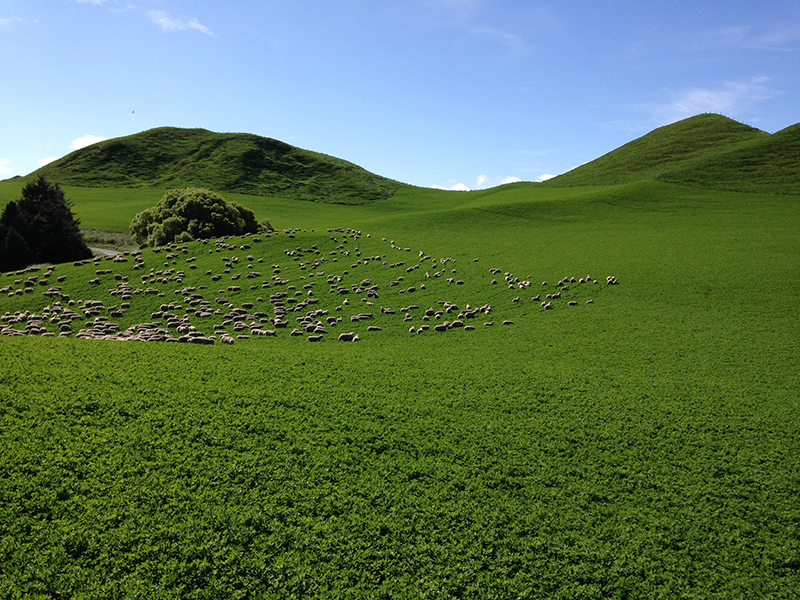 “We believe grass fed beef is the champagne of proteins, but we recognise that society is moving towards more plant based diets and in the longer term, synthetic proteins. This will be driven by environmental awareness rather than as a health choice. We recognize the environmental footprint of agriculture, and as importantly, the growing public perception around this. We agree more needs to be done to help protect what we have and believe sustainability needs to be at the core of New Zealand’s agricultural decisions.  Consumers will, and already are, defining the agricultural products of the future. All of this poses challenges and opportunities. We wholeheartedly believe GM free to be a major asset and differentiation of New Zealand produce, again due to public perception regardless of the conflicting science.

“Looking ahead to the next twenty years we believe that given all of these points, quinoa can play an important role in the New Zealand rural landscape. Long term we have a few ideas around New Zealand supporting an export industry for quinoa.”