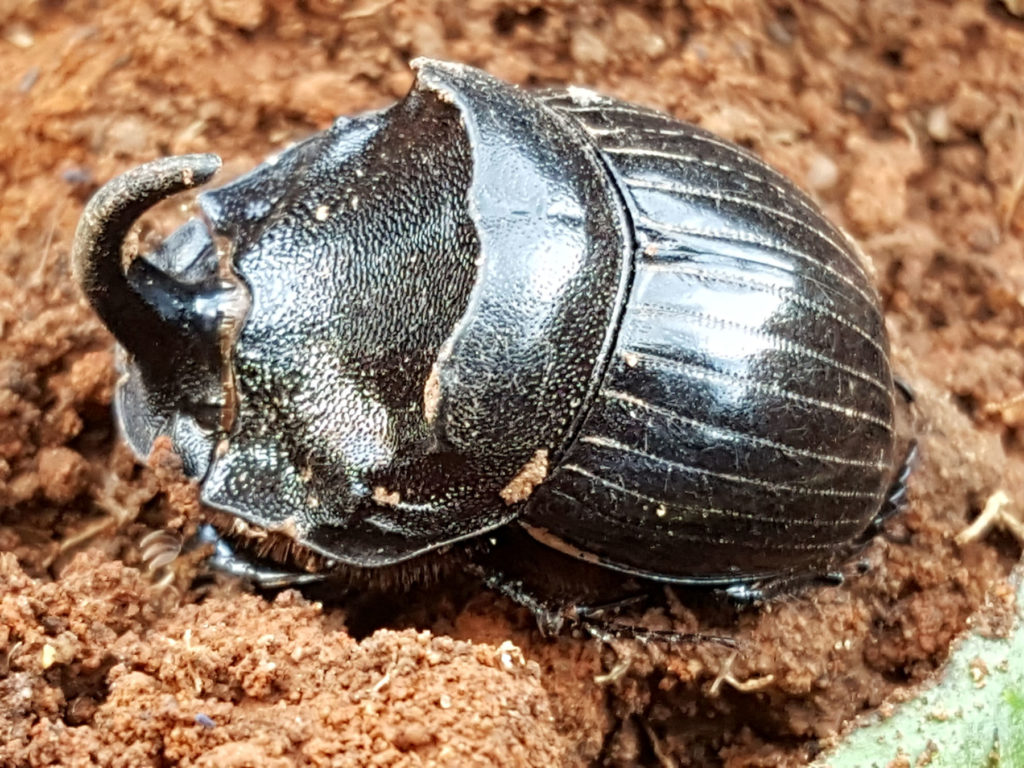 When dung hits the land

New Zealand is recognised as the world’s leading pastoral agricultural producer. Agriculture is the backbone of New Zealand’s economy, with pasture based exports (NZD$22 billion in 2015) representing 47% of New Zealand’s total merchandise exports. Yet transformation of our pastoral production system is essential. New Zealanders are becoming increasingly concerned about the environmental impact of our agricultural industry. As New Zealand has become the world’s largest dairy exporter (9th largest milk producer in the world) we have also become inundated with dung and all its associated environmental problems, such as poor water quality.

There are over 6.7 million dairy cows in New Zealand, each producing on average 27 kilograms of dung a day. That is over 66 million tonnes of dung a year. By the time you add in another 3.7 million cattle and 29.8 million sheep that is over 100,000,000 tonnes of dung a year which can sit around for months at a time. To put that into perspective, that is enough dung to fill 41,000 Olympic sized pools, which if joined end to end would stretch from Cape Reinga to the Bluff. That is one river that would not meet anyone’s swimming standards. 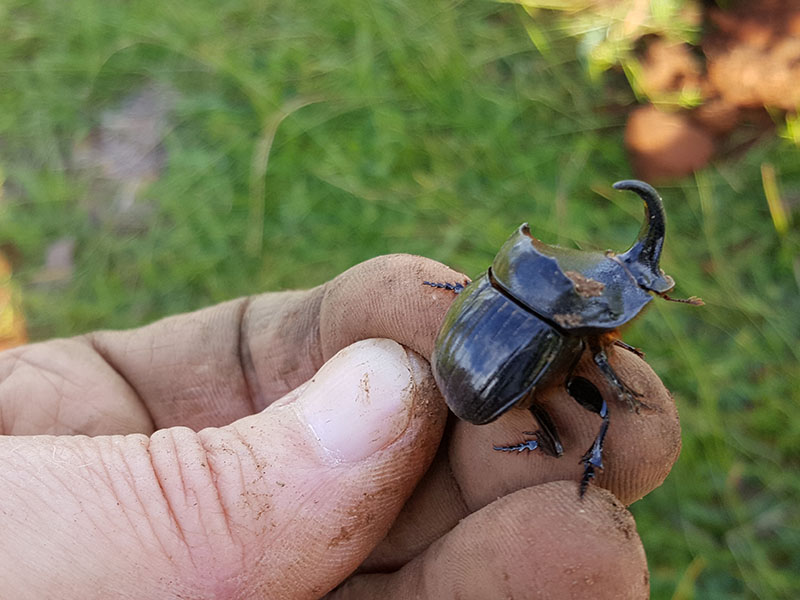 A lot of that dung, with its associated nutrients and E. coli, runs-off or leaches, polluting our rivers, streams and aquifers. Additional problems include forage foul, reducing the amount of clean grass available for the stock to eat (dung covers the equivalent of 14,000 rugby fields per month). Parasites and flies also proliferate in the exposed dung, increasing the need for chemical treatment of livestock.

Why are dung beetles natures solution to sustainable farming?

As with many environmental issues, nature offers a solution. Dung beetles evolved alongside dung producing animals to recycle animal waste and restore the natural balance of the soil.

Dung beetles provide a range of ecosystem services, including;

Unfortunately for New Zealand, when we started importing livestock over 150 years ago, we didn’t think of bringing their janitors with them. New Zealand has no native grass grazing mammals and consequently lacks native dung beetles that are adapted to exploit the dung produced by pastoral livestock. Consequently, we need to begin the process of introducing dung beetles, which can effectively deal with the dung produced by our introduced livestock. 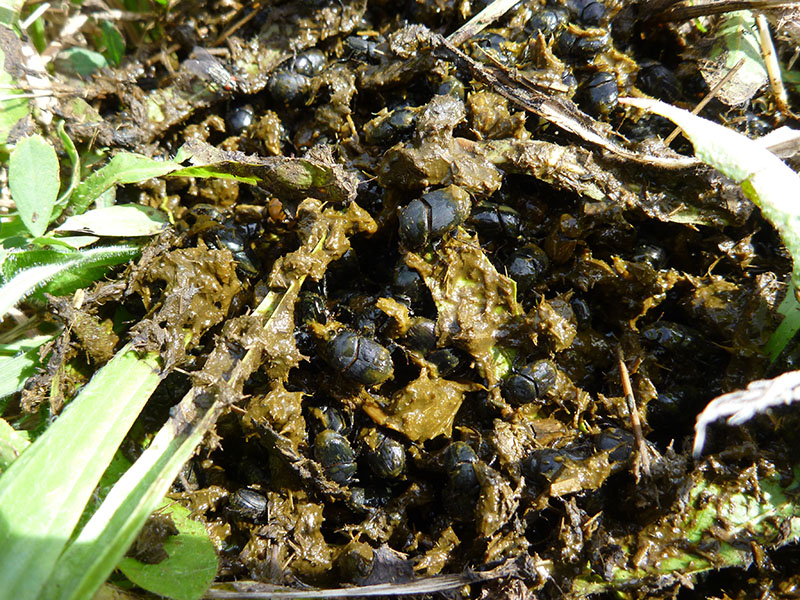 Onthophagus binodis and O. taurus dung beetles en-mass in freshly voided dairy cattle manure in South Australia. This is what you would expect to see after several years of establishment of these beetles on NZ farms.

Exotic pastoral dung beetles have been deliberately introduced into a number of countries where they were previously absent. Australia imported 55 species of dung beetles between 1968 and 1982 and recently started importing new species. Overseas establishment projects show conclusively that introducing dung beetles helps significantly to improve long term sustainability, reduce costs of agricultural inputs, boost productivity and increase profitability. Once established, the system is self-sustaining and will operate without running or maintenance costs. 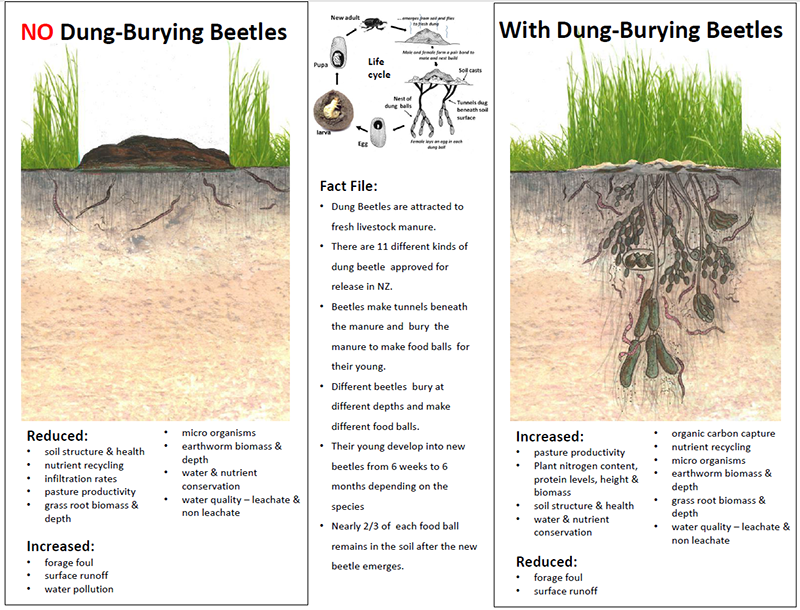 A typical view through the soil profile beneath dung pats, and an overview of the consequences of having or not having dung beetles. Soil structure, chemistry and biological activity beneath manure piles are elevated for up to 3 years following dung beetle activity. Without dung beetles manure can sit around from 3 weeks to more than 3 months depending on the season, with forage avoidance ensues owing to the repugnance of the manure to grazing livestock.

The introduction of exotic dung beetles has the potential to greatly improve the sustainability of livestock production in New Zealand. An application lodged by a group of farmers and councils to release  11 species of exotic dung-burying beetles into New Zealand was approved in 2011 by the Environmental Risk Management Authority (ERMA) which, like its successor, the Environmental Protection Authority (EPA), makes decisions by evaluating the risks, costs, and benefits of introducing ‘new organisms’. Several species have been imported and mass reared with a subsequent number of limited releases.

Dung Beetle Innovations (DBI) was founded off the back of the initial release project with the objective to import and commercially rear all 11 species. DBI currently has 6 dung beetle species that are available on a commercial scale for sale to livestock farmers throughout New Zealand. Two winter-active species currently in a Landcare Research (LCR) containment facility will be available for sale in 2018 once they have been disease tested and permitted to leave quarantine. Additional species are to be imported into New Zealand over the next few years. 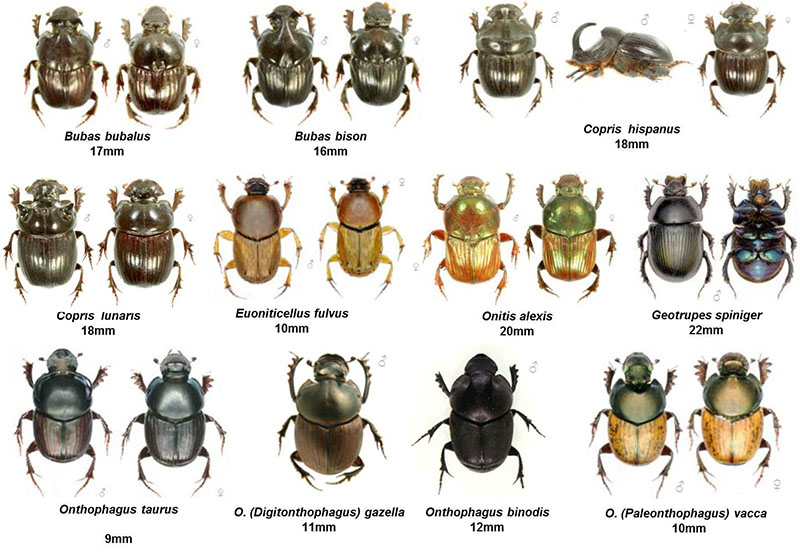 An array of exotic dung beetles available for sale by Dung Beetle Innovations. The beetles approved for release in New Zealand are suitable for most if not all pastures throughout the country.

A number of post release research projects have been undertaken to replicate key benefits reported overseas. These assessed the impact of dung beetle activity on surface water run-off and sediment load, and survivorship of cattle helminthes. Results from these studies show significant reductions comparable to those published overseas findings. DBI (in collaboration with MPI, Beef + Lamb NZ, and LCR) are currently conducting research projects; (1)  investigating the relationship between dung beetle activity and the percolation of E. coli, nitrogen, and phosphate, and (2) investigating the relationship between dung beetle activity and soil physics and chemistry.

Last year was the first commercial release of beetles, with 30 packages sold between Starter Packs (1 species) through to Whole Farm Packages (4 species). While paying between $6,000 to $10,000 to seed a farm with beetles may be minimal compared to other farm purchases, without an established track record in NZ, purchasing beetles requires a leap of faith. Most of these farmers did not purchase based on the prospect of future economic gains, but rather that dung beetles aligned with their own philosophy about sustainable farming.

What needs to be done now?

To work at the scale and speed demanded this solution can’t be left to a few progressive farmers. The current situation of individual farmers purchasing beetles is simply not going to work quickly enough. To make a real difference beetles need to be seeded in a co-ordinated catchment or regional scale. It is only then that the beetles can be seeded in large enough numbers that they can multiply rapidly and their activity will result in detectable improvements to our waterways. This can only happen in partnership between farmers and the wider community (primary industry organisations, iwi, councils and government).

New Zealand cannot wait another 50 years before dung beetles organically establish in enough numbers to make a detectable difference at a catchment scale. Just like riparian planting and biological control organisms for weeds, dung beetles must be funded using a mixture of private (farmer) and public money or it simply will not happen quickly enough to make a difference to the increasingly polluted country we live in.