A natural source of energy that is not depleted by use. Examples include water, wind, geothermal or solar power.

As the countries of the world map out strategies to bend their fossil fuel emissions curves down to tackle climate change and air pollution, New Zealand’s renewables advantage shines bright. Our ability to generate clean, renewable electricity is perhaps our greatest international advantage. And by 2035, that advantage could be running at 100 percent. But for New Zealand to secure a smooth transition to a truly renewable electricity system — and realise its economic and environmental benefits — a multifaceted focus is required: on supply and demand side aspects of the electricity system, on specific drivers and on system resilience. 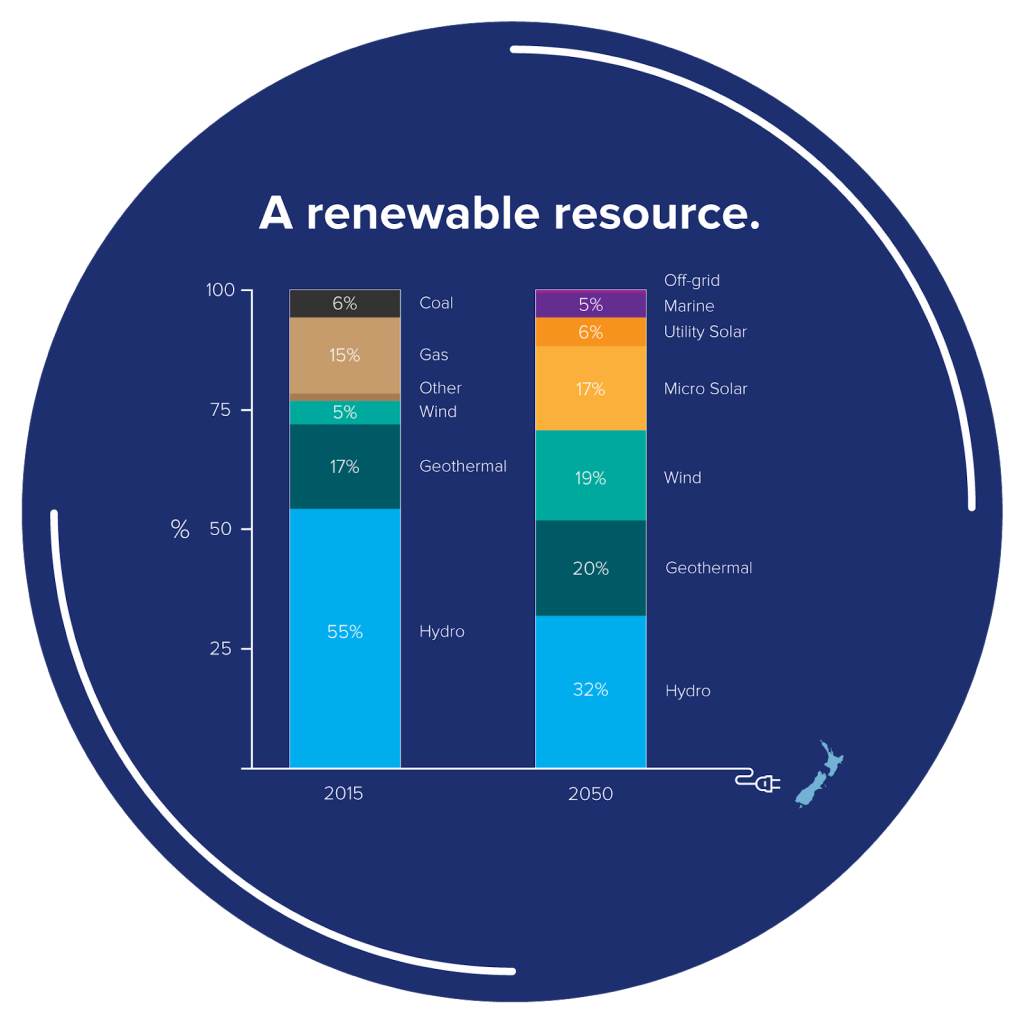 Transitioning from an 82 to 100 percent renewable electricity profile is harder said than done: ensuring the grid is reliable and affordable without the safety net of traditional fuels is New Zealand’s chief challenge, especially with electricity demand set to double by 2050. Because of our heavy reliance on hydroelectricity (which is susceptible to dry years), ensuring baseload generation will require significant investments in intermittency-mitigating technologies including distributed generation, industrial demand side response and battery storage. The Productivity Commission’s report on pathways to a low-emissions future provides additional incentives for these technologies. It identified that one of the three key drivers to a low-emissions economy will be replacing combustible fossil fuels with electricity in the transport sector, principally through the rapid uptake of electric vehicles. Of course, for that transport transition to be remotely effective, an electricity grid that is free of fossil fuels is a prerequisite.

New Zealand’s transition to 100 percent renewables will also drive job creation and create new opportunities. The International Labour Organisation’s flagship 2018 report estimates 24 million new jobs will be created globally by 2030 as a result of transitioning to the low-carbon economy, substantially offsetting losses in traditional industries. Already in the US, solar accounts for the largest share of workers in the Electric Power Generation sector — almost double that of fossil fuels. Advantages will not simply be drawn by eliminating fossil fuels from our energy mix, but by shifting from them today. A 2018 Westpac Climate Change Impact Report found that by weaning ourselves off coal and gas and taking climate change action seriously now, we could be $30 billion better off by 2050.


A deeply important benefit in the shift to a low-carbon economy also lies in our geothermal energy advantage. Offering distinct environmental and economic advantages, geothermal energy emits 18 percent the CO2 a similar sized coal-fired power station does; it has a load factor of 95 percent (compared to 30-50 percent for the average hydro or wind power plant) and it can produce three times the energy of a wind farm of a similar size. It is also one of New Zealand’s cheapest energy sources. Between 2008 and 2014, half of all geothermal energy installed around the world took place in New Zealand, leading to a doubling of our geothermal electricity capacity. Given the importance geothermal could have in the future for our Ring of Fire neighbours — such as Indonesia, Vietnam and the Philippines — we’re well-placed to increase the export of our expertise.