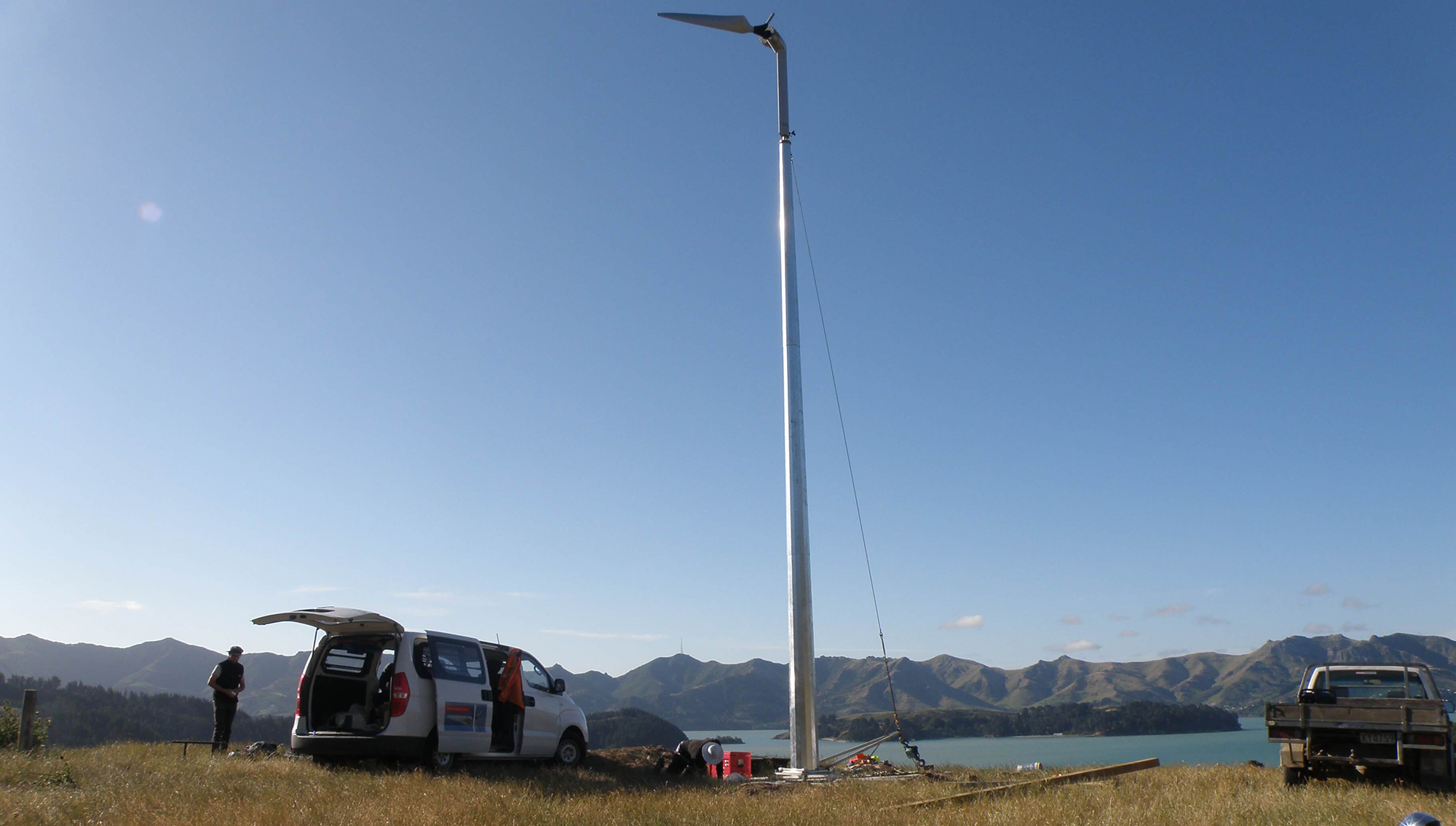 Wind is the world’s second most universal renewable energy resource. With New Zealand’s long coastline and Roaring Forties latitude, it’s no surprise that wind is one of the fastest growing generation options in New Zealand.

However, up until now, wind power technology has focused on large scale commercial generation, leaving people who want to use this renewable resource for their own power generation with some big challenges.

The question is, how can we realise this huge opportunity to harness wind power at a diversified level? How can we cost-effectively and efficiently scale down technology that has been built to scale up?

The answer, we think, isn’t about scale at all. It’s about completely new technology, new turbine design, and a new wind power paradigm that at Powerhouse Wind we see as a breakthrough for micro wind generation.

How do we use our wind resource now?

Commercial scale wind turbines are widespread in New Zealand. The country’s 19 wind farms operating or currently under construction have capacity to supply around 690 megawatts annually. While significant, this is only 5% of New Zealand’s grid generation, allowing big room for growth as demand increases. This is reflected in consents, with 2500 MW currently consented and developers are looking for new commercial sites.

At the same time, we see that distributed generation opportunities for domestic and small scale windpower remain untapped. Commercial and technology development has focused on large scale generation, while household wind power generation has mostly been limited to dedicated enthusiasts.

With the progress that photovoltaic (PV) technology is making to utilise our sun resource, there is an open window to get small scale wind power onto a similar development path and provide another distributed generation opportunity for New Zealanders aiming to power houses and other systems in all weathers and seasons.

Where are we on this path?

Historically, wind power has developed from windmills using many low efficiency blades turning slowly to directly drive loads like pumps and grindstones. Technical evolution has given us today’s giant wind turbines with fewer blades of higher efficiency driving electrical generators. In the past two decades alone, advances in wind turbine technology have resulted in turbines that are more than twice as tall, and with bladed lengths twice as long as those of the 1990s, abetted by improvements in materials technology.

On the flip side, as commercial scale generation is increasing in size and generating capacity, wind power is often considered too expensive for small scale user-generators. The internal technology that allows maximum efficiency in changing wind conditions has been expensive and challenging to scale down. The larger blades generate significant noise and visual impact, reducing their domestic appeal, neighbourhood goodwill and councils’ willingness to allow them. The result is that wind is a significant renewable energy option with a huge amount of unrealised potential for New Zealanders.

How can we make small scale wind power work?

Investment in new technology has been the key driver in this breakthrough in micro wind power generation.

Working with three other design engineers who share a passion for developing sustainable energy we founded Powerhouse Wind to try and solve this problem. We started with a history of successful product development, engineering design and a pie-in-the-sky idea for a wind turbine that could be as user friendly as the best domestic appliance. Since developing a concept product as a small team, we have worked with a network of forward thinking supporters to develop this completely new wind turbine for domestic use.

Our turbines are unusual and beautiful. We’ve refined the design with prototypes and pilot production machines installed with some very open minded lead users across the South Island.

The first thing that highlights this new direction in generation technology is that our Thinair turbine only has only one blade.
This takes a little getting used to, but the rationale behind it holds both intuitive and technical appeal when you consider the physics of wind power.

A wind turbine is there to slow the wind down by two-thirds and convert as much of that energy into excited electrons as possible. The goal is precise, as attempting to slow the wind more or less results in lower efficiency. As turbine designers, we have at our disposal the number of blades, the speed of the rotor, the width or chord of the blade and the performance of the airfoil to achieve the ideal result.

At Powerhouse Wind, we have gone to the top of that table and designed around just one blade. There are some challenges involved in making it work, but the benefits are a superb minimal design where the least possible materials sweep the most possible area, with just one smoother flowing tip and trailing edge to stir up the vortices that cause rotor noise. The concept also allows the blade to fold downwind when the machine is stopped to present the lowest possible profile to storm winds.

The upshot is that we’ve developed a wind turbine that has improved domestic efficiency, while reducing the visual and noise impact that has on occasion led to ‘not in my back yard‘ attitudes towards wind power generation. At the same time that noise levels and height of the structure have been minimised, we’ve also seen a shift with councils, with a number now recognising the role of windpower and increasingly making allowances for generation on rural residential sites more possible in their district plans.

A team approach to the development path

This technology is just the first step towards our vision of setting New Zealand on a path to making better local use of our national wind resource.

Once the concept was proven, in order to make the technology available, we faced a huge challenge in developing a sophisticated product for the needs of those who might use it, for manufacture and servicing and a long sustainable life.

If the blade design was project one, the less-visible but just as significant electronics and software components of Thinair are projects two and three. Refining every part and system for performance, manufacture and reliability was greatly accelerated by support from Callaghan Innovation through Technology Transfer funding which matched investment from Powerhouse Wind’s shareholders to enable us to collaborate with Workspace at Otago Polytech.

Through this phase, we had the support of New Zealand’s world class suppliers. Electronic boards, power conditioning and inversion, plastics manufacturing, and tower systems were all reviewed and refined. Kamahi Electronics and J-Tech Plastics in Dunedin and Enasolar and Spunlite in Christchurch, stepped up to the challenging demands of the project, buying into the vision of the Thinair and its potential impact for power generation.

Another group of innovators we owe much gratitude to are our lead users. These are customers who have their own stories as to how they came to choose a wind turbine, but all share the characteristic of being willing to work with well-intentioned enthusiasts in bringing Thinair to the real world of storms and sun, wild electrical events and the many lessons along the way to having machines running or being available to run 24 hours a day, 365 days per year.

Finally and hugely importantly, it takes a stream of investment to provide the life blood for a project like this. The first trickle comes of course from the founders, and then a rivulet from friends and family, and for us the stream has come from crowdfunding. We have PledgeMe to thank for their charisma, expertise and enthusiasm in helping us find 120 investors to take us through the first stage of market building and reaching out to wider opportunities overseas. Maybe we will need a river at some stage to reach the market potential, but at this stage Powerhouse Wind Ltd is floating with nose above water exploring that opportunity.

So it might take a village to raise a child, but it takes contributions from all over a nation to allow us to take such significant steps on the path to using our wind resource. 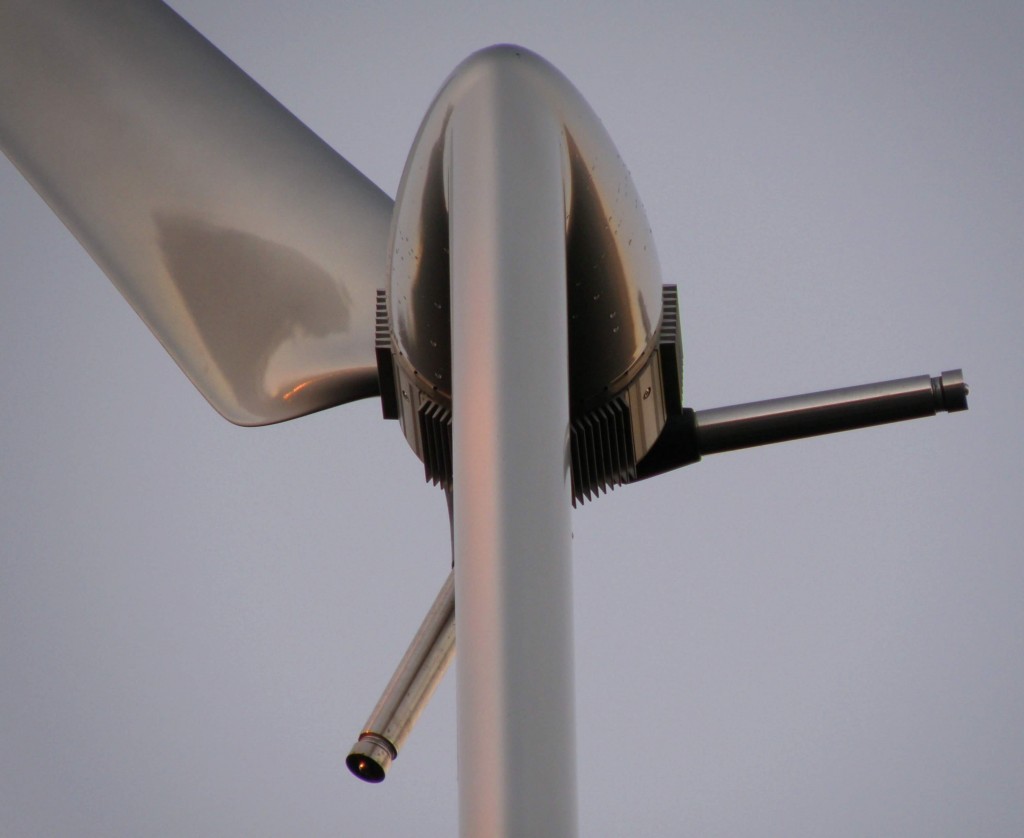 What are the next steps?

Generating energy from a renewable resource close to the point of use and close to the scale of the application is such a compelling idea that we believe it should have universal appeal.

The technology we have created in the development of Thinair has significantly reduced the cost, noise, and negative visual impact of domestic wind turbines, while increasing their efficiency, reliability, and appeal for rural residential and small scale generation. For many rural property owners, the Thinair means that it is now cheaper to install a domestic off- grid renewable energy system than it is to connect to the national electricity grid.

New Zealand has experienced phenomenal growth in uptake of solar PV as the cost has come down. This is predicted to continue as innovative developers turn their eyes to battery technology.

At the same time, perceptions of off-grid living are undergoing a reversal, as homeowners demand more energy conscious home designs and we work to change the perception of off-grid living as being one of sacrifice. Coupled with the ongoing growth in lifestyle block or rural residential developments in New Zealand, domestic wind power generation has potential to make a significant contribution to New Zealand’s distributed electricity generation in the immediate and long term.

We hope that Thinair demonstrates that harnessing New Zealand’s wind is an exciting generation option, either as stand-alone generation or to support PV in all seasons and conditions.

More, we hope that our ongoing story can inspire other pie-in-the-sky dreamers, that game changing technology can have small beginnings, as long as enough people share a vision and a desire to see things change.

Bill has a strong personal interest in a great wind turbine solution, he lives in an off-grid house and has a long standing interest and belief in local energy solutions. After mechanical engineering training, Bill worked for New Zealand Electricity for 4 years. Following some time working overseas, Bill did an MBA at Otago University, including a project for Fisher & Paykel Appliances which evolved into 18 years of employment with the company. He worked on a number of roles starting with design engineering on the DishDrawer team, and concluding with responsibility for Engineering Services for all sites.