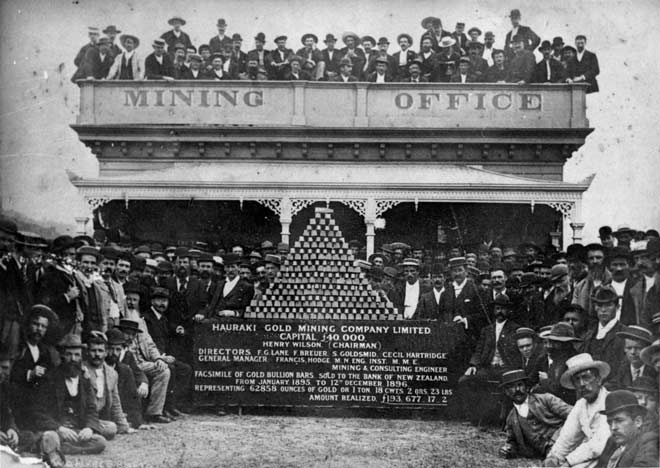 The fact is that the “new climate economy” will demand more mining, because many of the technologies on which the future depends are based on minerals. The problem, if there is one, is finding new economic deposits, and then figuring out how to mine them safely and responsibly; that’s what the mining industry means by sustainable mining. In this, New Zealand can be a world leader.

Consider electric vehicles. Plug-in cars were much talked about at the climate change and business conference run by the Environmental Defence Society in Auckland in October 2015. That excellent two-day event was the impetus for this contribution. A Nissan Leaf would have 60kg of copper in it, three times more than in a conventional car. To say nothing of the lithium, cobalt, vanadium, phosphate and other metals and minerals that go into the batteries.

A single wind turbine contains on average around 4 tonnes of copper, 300t of steel (made of iron and coal), 3t of aluminium, 500kg of rare earth elements, and 1100t of concrete.  These figures are sourced from the Northwest Mining Association in the US, and are likely to be an under-estimate, with the size of the turbines continuing to increase.

French academics Olivier Vidal, Bruno Goffé and Nicholas Arndt reported in Nature Geoscience in 2013 that for an equivalent installed capacity, solar and wind facilities require up to 15 times more concrete, 90 times more aluminium, and 50 times more iron, copper and glass than is the case for fossil fuels or nuclear energy.

Vidal, Goffe and Arndt say that for solar and wind, based on WWF International projections, the world will need an extra 3200 million tonnes of steel, 310 Mt of aluminium, 40 Mt of copper, 800 Mt of glass, and 20 billion tonnes of concrete – as well as rare earth elements, and many other metals, including gold, silver and platinum group metals. These are extra-ordinary figures, even accepting that they are no more than indicative.

To produce this amount of material will require a 5-18% annual increase in global mining production, for this purpose alone, over the next 40 years. New Zealand already produces, or has minerals potential in the minerals mentioned, including aggregates for roading, construction, and/or other infrastructure.

So, the drive to the “new climate economy” will require more mining (even with recycling where economic, and 30% of steel and more than 30% of copper are recycled), and New Zealand could be part of that future.

Metals that New Zealand produces today or could supply in the future, onshore or offshore, include: iron ore and coal (for steel and steel alloys); copper (electricity); titanium (pigments and alloys); vanadium and tungsten (specialty steels). Steel is made at Glenbrook, and aluminium (based on Australian ore) at Tiwai Pt, the only aluminium smelter in the world using renewable electricity.

There has been some discussion on prospectivity (but not mining as yet) in New Zealand for rare earth elements, e.g., yttrium, cerium and neodymium, and a similar metal, tantalum These metals are, among other things, technology performance improvers where space is at a premium – in computer hard drives, mobile phones, superconductors, capacitors, hearing aids, pacemakers, lasers, optics, GPS systems, electromagnets. They also find uses in high-performance ceramics, in electronics, and as catalysts in some industrial processes. Mining in this area, if it ever occurred, would attract overseas interest because a significant part of Rare Earth Elements and tantalum mining is in the category of “conflict minerals”  (such as the Democratic Republic of Congo) or is done in parts of the world where environmental regulation is limited or non-existent (China).

And let’s not forget gold. While this metal is most thought of for its use in investment and jewellery, in 2014 technology accounted for 8% of global demand, or 347 tonnes, of which 80% is used in electronics. For an idea of scale, it would take 30 years for New Zealand to produce that much gold.

Nonetheless, mining does have environmental impacts, as do all natural resource-based activities, including food production and renewable energy schemes, on land and in the oceans. At issue is how these impacts are managed to meet the requirements of the Resource Management Act (RMA) system, and society’s growing expectations. There are trade-offs in this area, that need to be made in a way that meet the “sustainable management” tests of the RMA, and are consistent with the concept of clean and green New Zealand. In mining’s favour in this area is the high wealth earned off a relatively small footprint. OceanaGold has estimated that it would take nearly 700 years of farming on the footprint of the Macraes gold mine in East Otago to earn the same wealth as that expected over the life of the mine. And much of that land is being, and will be returned into farmland once mining is completed. Not all of it will, however. Any open pit remaining will likely be turned into a lake as part of the mine’s closure plan.

The science and practice of predicting and managing the environment impacts of mining have evolved apace since the Resource Management Act was passed in 1991. The next stage of this work will be a life cycle guide on mining due to be published in 2016 by Landcare Research, the Universities of Canterbury and Otago, and CRL Energy. Landcare has already placed a mine site restoration guide on the West Coast Regional Council web site.

Mining is a temporary use of land, between a few years and, in extreme cases, as much as 100 years, depending on the type of mine and nature of the minerals and the geology. After mine closure, the land is returned to a former use, a new use or an enhanced use, depending on resource consent conditions. Farmland used for mining is typically returned into more productive farmland, with an investment made in soil, its fertility, and quality seed. Examples abound on the West Coast after alluvial gold mining, and at Macraes.

Mining and quarrying on conservation land entail compensation payments to the Department of Conservation, which are then spent on native species protection and other initiatives. That can include species recovery work, e.g., whio/blue duck, kiwi species, NZ dotterel, as well as pest control over targeted areas, and acquisition of private land for conservation.

Looking ahead, managing the environmental impacts of mining today is increasingly done by using best-practice methods that will become off-the-shelf tools over time, meeting international and New Zealand standards. Research on mine site rehabilitation with native plant species at OceanaGold’s Globe Progress gold mine near Reefton has been published in peer-reviewed journals.

The direct vegetation transfer method pioneered in New Zealand at the Solid Energy Stockton mine, by Landcare Research, provides for habitat to be removed with part of the soil profile, stored during mining, and returned, with some dieback of larger shrubs though otherwise intact, including with soil and invertebrate communities. At this stage the application of this technique is boutique because it is very expensive.

These examples have been provided to show that environmental management at mine sites in New Zealand has to be as much about “doing the right thing” as about compliance. The mining life cycle guide goes directly to this point.

As New Zealand transitions into the new climate economy, we will need minerals. Some of them will be sourced locally, for example, aggregates. New Zealand-made steel will compete with imported steel in meeting the wide range of infrastructural needs. While some cement is still made domestically, imports are becoming more important. The silver and gold that New Zealand exports are international commodities – they enter the global market for these metals, and we are, of course, part of that market.

As to new opportunities, New Zealand tungsten or vanadium – as export products – could be the next cabs off the rank. Tungsten has the highest melting point of any metal and is highly resistant to wear, and is used in, e.g., lighting filaments, electrodes and tool-making. Aside from lithium batteries, vanadium is used in light, tough, strong and heat resistant steel alloys – the aerospace metal par excellence.

As a general rule, it is not possible to gain a price premium for environmentally-responsible metals because these are commodity markets. A more useful way to look at this aspect is that the trend in global minerals investment is increasingly towards parts of the world where there is the rule of law, systems for managing natural resources, and innovation in environmental management. That is a point on which New Zealand can draw when attracting investment into our country for exploration and mining.

Copper is a longer shot for New Zealand, it is fair to say. There is prospectivity offshore in the Kermadec volcanic arc (southwest of where the new sanctuary is planned), associated with hydrothermal vents on the seafloor. Many other metals are deposited in high grades in these systems as well, such as gold, platinum and zinc. At issue is the challenge of proving up resources and mining them at depths exceeding 1km of water, while assessing and managing the environmental impacts. This last aspect is controversial, with some scientists saying these undersea environments are among the most resilient on the planet, accustomed as they are to volcanism and tectonics, and others saying too little is known about the biodiversity in these regions. On the other hand, global copper production is projected to peak in 2040 at 27 million tonnes. Seabed mining for copper will become more attractive with time; it is a question of when and where in the world, not if. It is also likely that more recycling of copper will occur, e.g., from electronics.

To conclude, minerals have a role in the debate on how to build a better future for New Zealand and the world. Finding and mining minerals, safely and environmentally responsibly, are no trivial matter, and the technologies for doing so are having to improve, as the easier-to-find deposits are depleted. Certainly, mining presents legitimate issues of concern to New Zealanders. Here, New Zealand is a technology taker, by and large, although the application in our country relies on local innovation for local conditions. The environment is disturbed, as is the case with many land-uses, and even with site restoration, residual effects will need to be managed via offsets or compensation, each presenting their own issues. The question here is where to mine and under what conditions, to ensure that we have both mining  and the environment.

On that note, mining and quarrying occupy around 0.05% of New Zealand’s land area, and contribute 0.9% of GDP, or $2 billion worth of minerals every year, half of which are exported, and the other half used in New Zealand. The sector employs directly and indirectly around 8000 people, who earn on average more than double the national average wage.

As a postscript, surely, it is more sustainable to mine in New Zealand, if we can, than in many other parts of the world. New Zealand today has the laws and the knowhow to do the job properly, and a business and regulatory culture that places mining under high scrutiny, as should be the case.

Bernie Napp has held the role of policy manager at Straterra for the last five years. Previously he has worked as a NZ diplomat, newspaper reporter, and at the Department of Conservation, in communications, and later, policy. Conservation and resource management policy and regulatory reform has been a focus, as well as climate change. Bernie holds tertiary qualifications in geology and journalism. In his spare time he enjoys writing, music, painting, food and wine, mountainbiking, camping, gardening and planting trees. His daughter, Olivia, 8, is a member of her school’s eco-club.