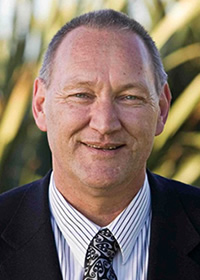 “Ngāi Tahu has a whakatauki (proverb) that says ‘Mō tātou, ā, mō kā uri ā muri ake nei’ – which means ‘For us, and our children after us’. These resonate with the principles of Pure Advantage – creating a better future for those generations yet to come,”

Mark Solomon is of Ngai Tahu and Ngāti Kuri descent, and is from Kaikoura on the east coast of Te Waipounamu. He is the elected Kaiwhakahaere (chair) of Te Runanga o Ngai Tahu, a position he has held since 1998. Mark has represented his Kaikoura Runanga since 1988 and has contributed to his community in many capacities, ranging from roles as a trustee of Takahanga Marae, the local school board and on the board of the Museum of New Zealand Te Papa Tongarewa, a position he held from 2001-07. Mark currently holds directorships with Te Hapai Mauri Ltd, Te Pataka o Tangaroa and Te Pataka o Rauru. He is also a Summit Member of the Hillary Institute and a member of Te Kawai Taumata. Mark believes a true rangatira is a servant of the people and reflects this in his role in helping establish the Iwi Chairs Forum and his ambition of kotahitanga for Māori.