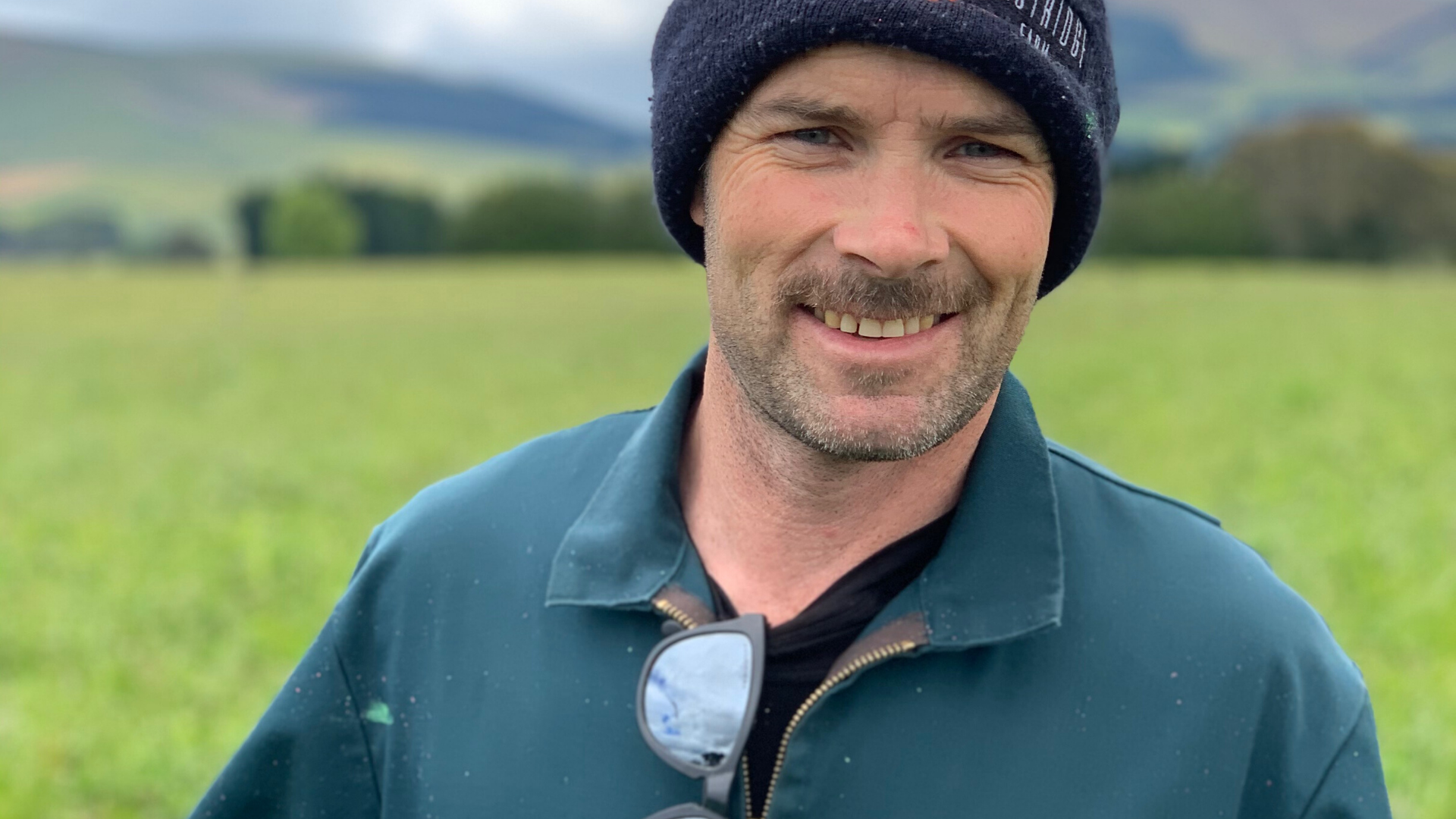 How a South Otago dairy farmer learned to trust his instincts

In mid 2017, dairy farmer Mark Anderson sat down at his South Otago kitchen table with a rep from a chemical fertiliser company for a regular scheduled catch up, as he did every month or so. But this time the conversation went a little different than usual.

Mark had been experiencing a growing discomfort with the ways in which he had been taught to farm his whole life. Being diagnosed with an auto-immune disease had led him to start reading up on healthy living, and what sort of agricultural systems produced the best foods. The inquiry took him down a path of learning about how food could be produced with greater nutritional integrity. This led him to organics, and then onto the next level being organic regenerative agriculture (regen ag).

Around the same time, he had been starting to question the highly extractive system of conventional dairy farming, watching staff get burned out from the long hours, seeing marriages breaking up, and constantly needing to put more and more synthetic inputs onto his land.

Mark had grown up on the 5th generation sheep and beef farm, and started working in dairy since leaving high school. He had been farming his whole life. As a trusted source of information about how to run his farm, he asked the rep about how chemical fertilisers interact with the healthy biological functioning of soils, and what he thought about those interactions.

After that conversation Mark never heard from the fertiliser rep again.

From that day onwards, Mark began to trust his own instincts and learn widely from others who had been embracing regenerative principles1 of land management. He took the recommendations of his friend and neighbour Hamish Bielski who had begun practicing the five soil health principles and sent him YouTube videos on regenerative agriculture and holistic grazing. He read books written by agroecologist Nicole Masters and microbiologist David Montgomery and Soil Food Web founder Elaine Ingham. He started following the research of highly influential regenerative farmer Gabe Brown in North Dakota, attended a seminar with soil ecologist and soil carbon expert Dr Christine Jones, and went to a woolshed session with humble Australian regenerative sheep and cropping extraordinaire Colin Seis. He has learned a lot from his mentor Siobhan Griffin – an American dairy farmer who successfully transitioned her dairy farm in New York state from being one of the first certified organic dairy farms in the state in 1997, to using regenerative grazing to sequester carbon. She has since moved to South Otago to become a regenerative farming coach.

After learning about the role of plant biodiversity providing a mix of different soil nutrients, Mark started planting companion plants and winter crops such as beans, vetch, kale, ryecorn, buckwheat, linseed, and oats to help reinstate the nitrogen and mineral cycles. The flowers helped to bring in predator species of insects that ate pests, and biodiversity increased. Crop yields were slightly down, but he was able to cut chemical inputs right out.

Mark has split his herd of 750 dairy cows in two, and cut down to once a day milking in order to focus on regenerative grazing techniques. He has put in place a longer grazing rotation on his paddocks to maximise solar energy harvesting (photosynthesis), moving the herd up to 5 times a day. The cows eat the top third or so of the plants, which contain the highest levels of energy, they trample about another third of the pasture into the ground which helps feed the soil biology and create a circular system, and they leave about one third which may be soiled to rapidly regrow.

Mark explains that his approach aims to mimic the grazing patterns of large herds of ruminant animals across the pre-colonial American prairies and Eastern European and Mongolian steppes, ecosystems renowned for their rich fertile soils. When he hosted South African holistic grazing coach Ian Mitchell-Innes in 2019, 75-100 farmers and industry reps turned up to listen and learn from someone in tune with animal performance and the land.

This quick-fire method of grazing allows for pasture recovery within 30-35 days. Dung pats disappear much faster as well within a couple of weeks, which indicates that the soil biology is working effectively to recycle the trampled plant litter and compost the dung and urine into valuable natural minerals. Once the system has fully recovered, the pasture is again full of the essential nutrients and minerals Mark’s animals need, with considerably less fertiliser inputs than they have needed in the past. He is still using fertiliser, though he’s switched to natural alternatives.

While Mark thinks it will take another five years of transition to have a truly regenerative system, early results are promising within a short space of time. Recent soil tests taken to 15cm have seen levels of both potassium and mineralisable nitrogen double. Other soil nutrients such as calcium, magnesium, sodium and organic sulphur have increased between 5-10%, a consequence of improved plant diversity and grazing management alone.

Within the past year, organic matter in the soil has increased by 1%. Given that a 1% increase in organic matter can boost the soil’s water holding capacity by anywhere from 144,000 to upwards of 180,000 litres of water per hectare, Mark’s farm is now becoming considerably more resistant to periods of drought. Consequently he thinks that widespread adoption of regen ag could be a gamechanger for New Zealand’s agricultural regions that rely on irrigation, and presents an opportunity to help clean up our rivers, with improved infiltration and less run-off from bare soil.

Mark believes that land stewards will need to run agricultural models in the future which align with nature and rely considerably less on fossil fuel derived products. As with many others that I have interviewed for the Our Regenerative Future series, Mark thinks the biggest barrier to the widespread adoption of regen ag across NZ is one of mindset.

“We need to move our mechanistic mindsets and egos from domination and manipulation of nature to life affirming living system processes.”

He’s seeing promising moves from large international corporations, pointing to the example of dairy giant Danone, which in 2018 announced that they were aiming to source 100% of their ingredients produced in France from regenerative agriculture by 2025. Patagonia founder Yvon Chouinard is a vocal proponent of regen ag, and the company has been running pilot programmes in sourcing both food and apparel fibres from certified regenerative organic farms. With these kinds of leading examples, Mark hopes more multi-nationals will begin to nurture the ‘whole’ through regenerative agriculture.

“It’s not comfort, but adversity that stimulates innovation.The challenge here is to undo the 80 years of learning from the green revolution. From universities to fertiliser companies, we’re coaxed down this path that relies heavily on outside inputs, and regenerative agriculture goes against all of that.” 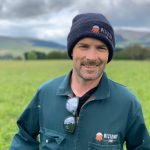 Fourth generation farmer Mark Anderson, wife Madeline and their three children farm in partnership with Marks parents on a 580ha dairy farm in Waiwera South, South Otago. It is our fourth year into our journey of re-aligning our farm operations to work alongside nature. We farm in the Waiwera catchment and boundary 6km of the Waiwera river on rolling to flat country.We milk 750 cows once-a-day holistically grazed on taller diverse pastures and mixed species forage crops. The farm also winters the cows in a way in which enhance and accelerate soil health and ecological services. Our vision is to repair the broken biological cycles industrial agriculture has set upon us, returning the health of the land, animals and the people. 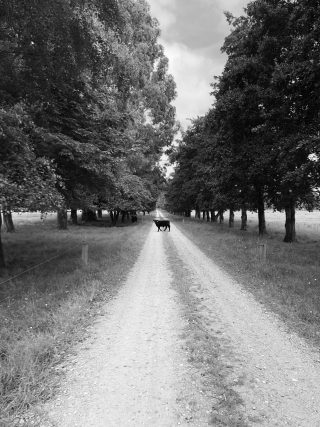 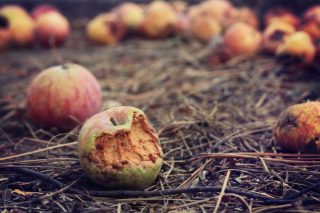 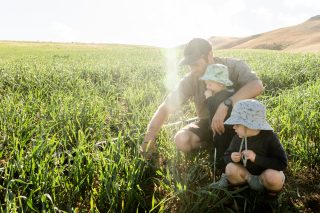