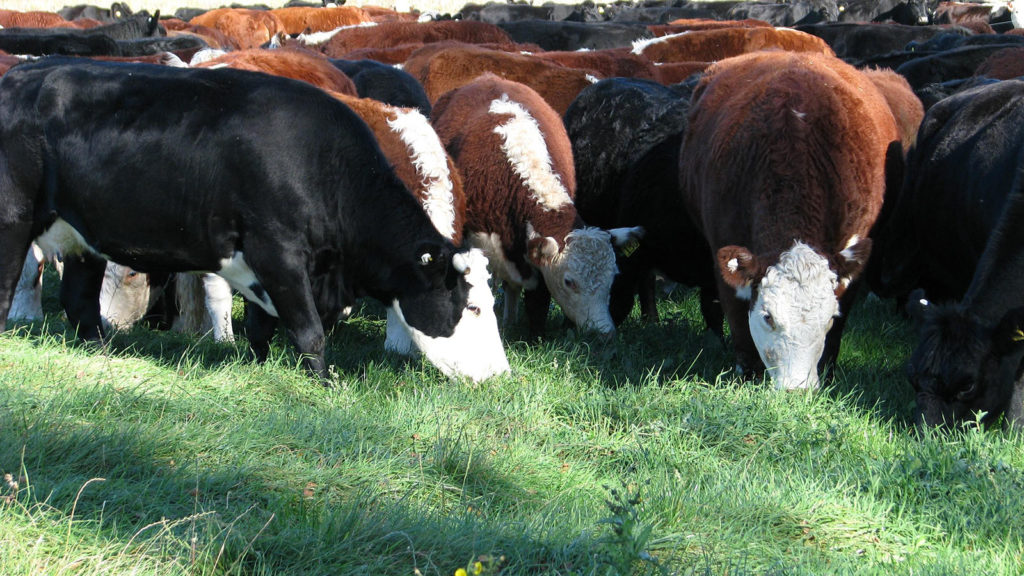 North American couple Tony and Jerrie Tipton do something really amazing. Mining companies call them as a last resort after substantial spending on seed and fertiliser to rejuvenate mining sites. They spread hay and straw around, graze their animals, and are gone in a matter of days. (Tipton & Heroism). These soils have a pH as low as 2 and yet six months later this biologically dead site is alive with germinating grasses and shrubs.

You would think the world would be banging down the Tipton’s door regarding this environmental miracle but they are ignored by governments, industry, and sadly the public.  The public see environment from absolute integrity; the only way it can heal itself is to be left alone because humans (as we are constantly reminded) can only abuse and destroy it. Whereas rural people see environment as a work in progress, they build up biological capital and use it in times of crisis or opportunity. It is these deep beliefs that makes recognition of valuable roles livestock can play near impossible.

Wildlife ecologist Allan Savory has battled this divide his entire career. Despite scientific and photographic evidence of his claim that properly managed livestock can be substituted for wildlife to regenerate grasslands, the environmental movement state it’s impossible and a fallacy. Vegetarian/vegan networks zealously chastise any form of livestock production while ignoring contributions of annual cropping to environmental pollution. Furthermore, the agricultural community dismisses his attempts as nothing more than rotational grazing and yet this unwillingness to explore livestock’s potential to enhance landscape function highlights a deep mistrust of anything ecological.

Savory argues management and science readily accept only three tools for managing land and have done throughout civilisation; Technology, anything made by human hand, Fire lit by human hand, and Rest which is removing any significant disturbance from managed land. The world of sustainable agriculture (organics/permaculture) etc has highlighted a fourth tool, Living Organisms and it is within that tool livestock reside. As a tool, Technology often directly challenges Living Organisms because its application frequently reduces biodiversity by destroying soil life.

According to Savory, grazing is the most abused environmental tool. When combined with brittleness; the degree of atmospheric moisture at soil surface, we understand how overgrazing in a highly seasonal or erratic rainfall environment (brittle) creates bare soil surfaces which often erode (photo 1). Bare soil reduces production capacity of any environment and reflects lower biodiversity.

Bringing ecology to grazing Savory highlights how unobservant agricultural training has become. For example, there is not a single textbook which describes what overgrazing is (Figure 1) and what an overgrazed plant looks like (Photo 1& 2). This is astonishing considering how much investment pastures require. Because agricultural trainers have no idea how to identify overgrazing farmers cannot learn that skill and therefore remain blind of early tell-tale signs pasture and livestock performance are in decline. The lack of ecology in agriculture means farmers have no idea what are the root causes of many pastoral problems and therefore are railroaded into options that are expensive and risky.

The greatest overgrazing myth has to do with animal numbers. Plant physiologists have long shown overgrazing is due to short recovery periods between grazing events which do not allow plants to regrow their roots and root hairs. Check out paddocks with a horse on outskirts of any town; one animal will overgraze one side and leave tall pasture on other side for the simple reason no animal grazes over its own dung (with exception of dairy cows). It’s not the animal, it’s how its managed which is key. 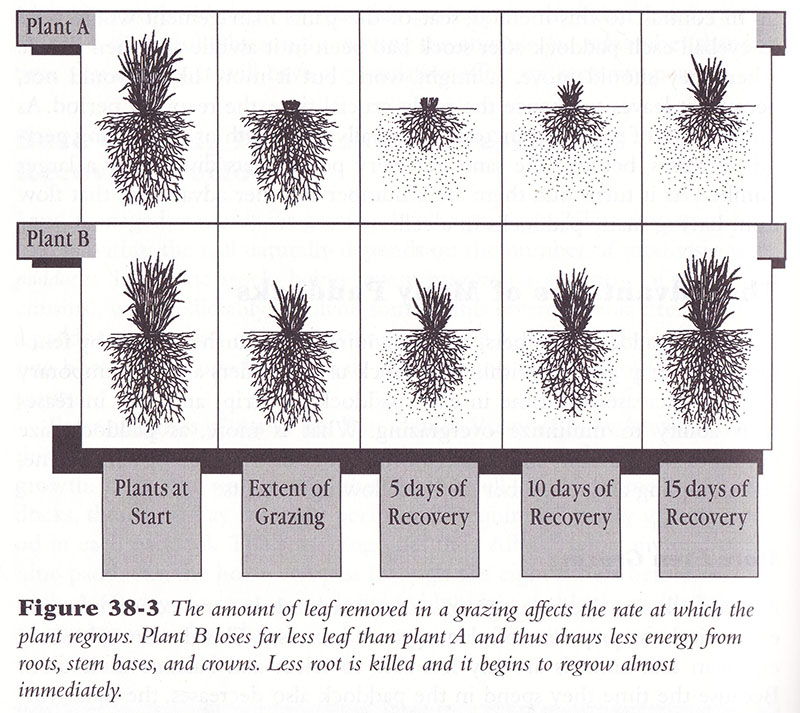 The point can be illustrated with this diagram (Photo 3) which farmers can also find in New Zealand Sheep Council’s 400 Plus: Improved Lamb Growth (2000 edition) guide on page 58) which states amount of leaf removed in a grazing affects rate at which plants regrow. The impact of this diagram linking production and ecology is missing.

The assumption shown here is leaf and root biomass reflect each other but that seldom happens. For example, Plant A (second frame from left) shows what happens when a plant is grazed; while leaf area disappears, root mass remains same as before. When grazed this way plants push out exudates (sugars and fats) to feed soil biology and they begin to regrow almost immediately.

When plants are overgrazed (because livestock have come back for a second graze) they do not have enough energy reserves to generate exudates so they slough root hairs and thinner roots to provide energy to grow leaf. That is shown with middle frame of Plant A. Done repeatedly this practice eventually kills Plant A, paddock burnout occurs and pasture will need renovating.

Its industry advice to monitor Plant B that gets farmers into trouble. These plants do not deliver better livestock performance because they are inferior (livestock only take top third) and monitoring them results in recovery periods that are too short. Reality is best plants (most nutritious and palatable) are going to be grazed like plant A and it’s those plants which need looking after.  Farmers monitoring Plant B compromise livestock performance, pasture productivity, soil function, soil fertility, and farm profitability; all based on best practice

Savory states grazing should occur when grazed plants look at least similar to ungrazed plants nearby. Today we are realising that means some grass leaves need to be very mature to contribute as litter to soil surface. This is how farmers can build soils very quickly by pumping more carbon into and on top of soil profiles.

There are two ways overgrazing occurs; firstly by bringing livestock back too soon when plants are growing slow. This practice is most common in New Zealand pastoral farming through rotational grazing. Secondly, having livestock stay too long among rapidly growing plants and practice of set stocking does this.

All these circumstances allow a second bite of a growing plant before it has replaced root reserves. Done often enough it results in best plants disappearing and being replaced by those of lower quality. This leads to pasture burnout and expensive practice of pasture renovation.

However, it’s the other tool livestock bring which causes most controversy, what Savory calls the most misunderstood tool; Animal Impact. This is all physical disturbance livestock create other than grazing including; dunging, urinating, rubbing, salivating, and trampling. This is done by changing behaviour through either Stock Density or Herd Effect. The public’s perception of this tool is confined to livestock up to their knees in mud in winter crops.

Stock Density is simply number of animals per hectare (Photo 4).  As that increases mob behaviour changes, grazing of plants becomes more even as does distribution of dung and urine.  NZ dairy and other farmers do this well but not for planned ecological reasons.
Whereas Herd Effect is changing livestock behaviour so they are no longer conscious of where they put their feet so soil surfaces are scuffed similar to surface cultivation. Droving is a classic example (Photo 5) but any stimulant that localises changes in behaviour can also be effective including erecting shade, spraying areas with saline or molasses, placement of hay, salt blocks, mineral trailers, or other supplements, or scratching posts.

The 365 buffalo would create a huge mess the day they went to the river and back. Environmentalists would ignore this mess because it occurs to them as natural but when cattle do this its splashed all over social media emphasising its unnaturalness. In either case imagine what that same path would look like 364 days later? Would you even know where a herd of buffalo had been?

And yet a single buffalo trekking daily to a river creates a bare trail devoid of vegetation (Photo 6), easily erodible by wind and rain is completely ignored. After all it’s just a benign trail right? And yet this ongoing gentle and seemingly benign activity is more ecologically damaging over time because environment doesn’t get time to recover from constant disturbance. Both situations are exposed to same number of buffalo days but outcomes are completely different. It’s not numbers but how livestock are managed which counts, a point that seems lost on policy makers while allowing opportunities to slip from farmers.

Overseas farmers are grazing 5,000 cattle per hectare, numbers that make any NZ dairy farmer’s eyes water and bring environmentalists to tears. Yet soil function improves, rainfall absorption increases because those animals will be on that hectare for 15 minutes and not return for 6 months or longer. This practice is done to regenerate soil health, mimicking what wild grazing animals did naturally before being managed by humans. The world’s great grasslands which were rich in fertility and biodiversity as a result of this. Instead environmentalists scream about immediate mess rather than longer term unseen benefits.