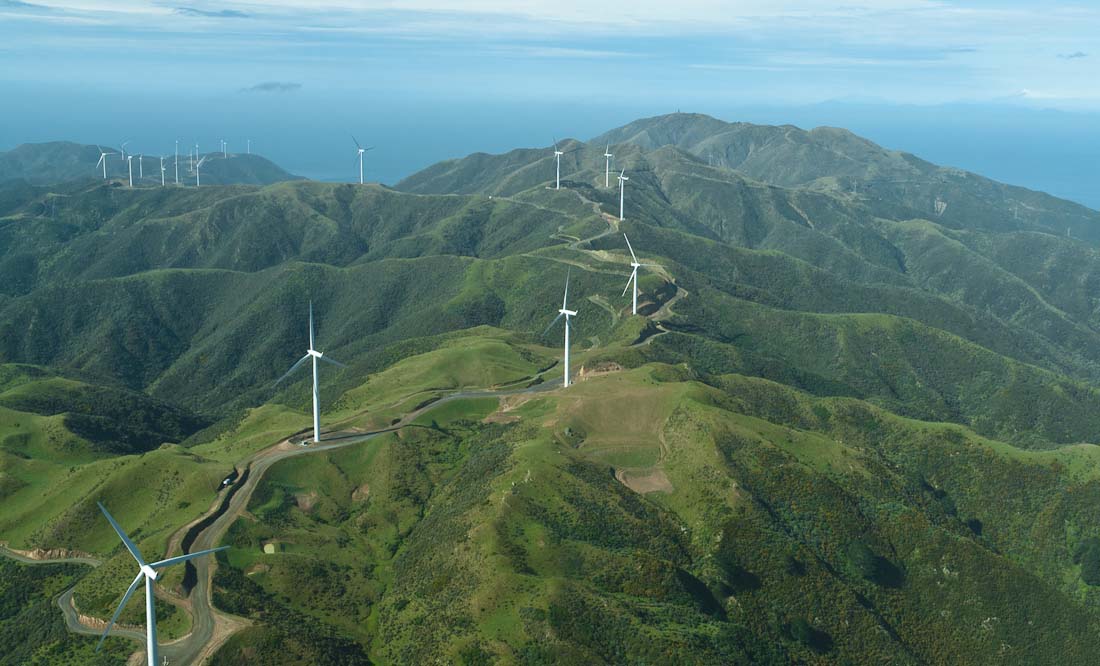 Some energy analysts will tell you achieving 100% renewable electricity in New Zealand by 2050 is an aspirational goal. This is a cynical example of greenwash – designed to delay any meaningful action.

We can achieve 100% renewable electricity in less than a decade.

Hydro power has long been our cheapest source of electricity, however solar and wind energy are fast become cheaper than fossil fuel in many international markets. In 2013, commercial solar power reached grid parity in Italy, Germany, and Spain. Denmark estimates that new wind plants coming online in 2016 will supply electricity at half the cost of new coal and natural gas plants.

The key measure of the price competitiveness of different electricity generation options is the ‘levelised cost of electricity’ (LCOE). LCOE measures the per kilowatt hour cost of constructing and operating a power plant over its full lifespan. Key inputs to the LCOE include financing costs, construction costs, fuel costs, management costs plus the assumed utilization rate of the plant . Renewable energy power plants have high up front costs and low operating costs. Unlike thermal power plants that are subject to exchange rate and commodity market risks throughout their operation, solar and wind power plants have no fuel costs.

New Zealand’s LCOE assessment assumes zero cost for pollution. In other words, the LCOE of fossil fuel generation excludes any compensation to society for the 5 million tonnes of carbon dioxide emitted in New Zealand each year by thermal power plants.

Despite enjoying this subsidy-by-omission, Bloomberg New Energy Finance’s global analysis found that the LCOE of fossil fuels are increasing just as the LCOE of renewables are decreasing. Investments by Germany, China, Italy, the United Kingdom, and others have massively expanded worldwide manufacturing capacity thereby driving down our costs of installing wind turbines and solar panels. The global LCOE for on-shore wind is now $US83 per megawatt hours while the LCOE for combined cycle natural gas generation is now $US93 in the Asia Pacific Region. This means that renewable energy is already competitive with fossil fuel generation, even if you ignore the cost of greenhouse gas pollution.

Energy security is a core driver of US military strategy. That is why over the past five years, the US Navy has consistently exceeded its renewable energy targets and is now building the largest solar farm in the world to provide power to fourteen of its US bases in the Southwest.

At the United Nations Rio Conference in 1992, New Zealand acknowledged our role in mitigating climate change and committed to reducing our greenhouse gas emissions by 2020 to 5% less than our emissions in 1990. Instead, New Zealand’s net emissions have increased by over 40%. Those who would prefer to retain the status quo argue that New Zealand shouldn’t act until larger countries, such as China, make significant moves to reduce their carbon missions.

Let’s take a closer look at this comparison. Research by the London School of Economics predicts that China’s carbon emissions will peak by 2025. For example, this year China will add more solar power generation than New Zealand’s entire installed capacity (from all energy sources). Conversely, independent research firm, Climate Action Tracker, estimates that if all countries were to apply New Zealand’s lackluster emission reductions the world would quickly blow past its agreed limit of 2 degrees warming.

Analysis by Nouveau Eco estimates that Australian mining giant Rio Tinto, the parent company majority owner of the Tiwai Smelter receives a combined annual price discount of over $100 million from Meridian Energy, Contact Energy and Genesis Energy. This is in addition to the $30 million direct subsidy provided by the New Zealand government in 2013. The aluminum smelter at Tiwai Point uses 13% of New Zealand’s total electricity supply. Requiring Rio Tinto to pay competitive wholesale prices for its electricity would lower electricity prices for all New Zealanders and would expose the high cost structure of our thermal power plants. Closure of the Tiwai smelter would also remove the demand uncertainty overshadowing investments in renewable energy. While uncertainty over the Tiwai smelter remains, electricity companies have delayed investments in wind, solar, and geothermal energy.

Wind energy currently delivers just 5% of our total electricity supply but has the potential to replace all of our existing fossil fuel generation. New Zealand’s major power generators have ten new – fully consented – projects that would collectively deliver 2852 megawatts of wind capacity.

This additional wind capacity alone would generate almost 10,000 gigawatts of energy each year, one quarter of our current electricity needs or all of the additional demand the Ministry of Business, Innovation and Employment forecasts New Zealand will need by 2040.

Meridian Energy’s 2012 study showed that investment in a national smart grid would save New Zealand billions of dollars. Furthermore, renewable energy technologies are increasingly able to generate power even in suboptimal conditions such as low wind speeds and low solar radiation. Recent upgrades to the national grid have enhanced our ability to match hydro generation to energy supply from other renewables and a smart grid would further enhance our national flexibility. Germany has demonstrated that staggering growth in renewable energy can be matched with an extraordinarily reliable electricity supply. Germany experiences just 15 minutes of outages a year, compared to 68 minutes in nuclear powered France, and four hours in coal powered Poland.

New Zealand could further enhance our grid’s ability to respond to fluctuations in supply and demand by expanding our geothermal generation and exploring sites for pumped-storage hydropower. Able to operate completely independent of the weather, geothermal has the potential to produce auxiliary power generation when all other renewable sources are not available. When grid scale storage is needed, surplus energy could be stored by pumping water uphill into a reservoir that is later released to deliver hydro energy.

Meaningful investment in renewable energy would drive economic growth, create high tech jobs, improve our balance of trade, all with the upside of permanently reduce our carbon emissions. Let’s stop relying on fossil fuel advocates to frame the vision of our energy future.