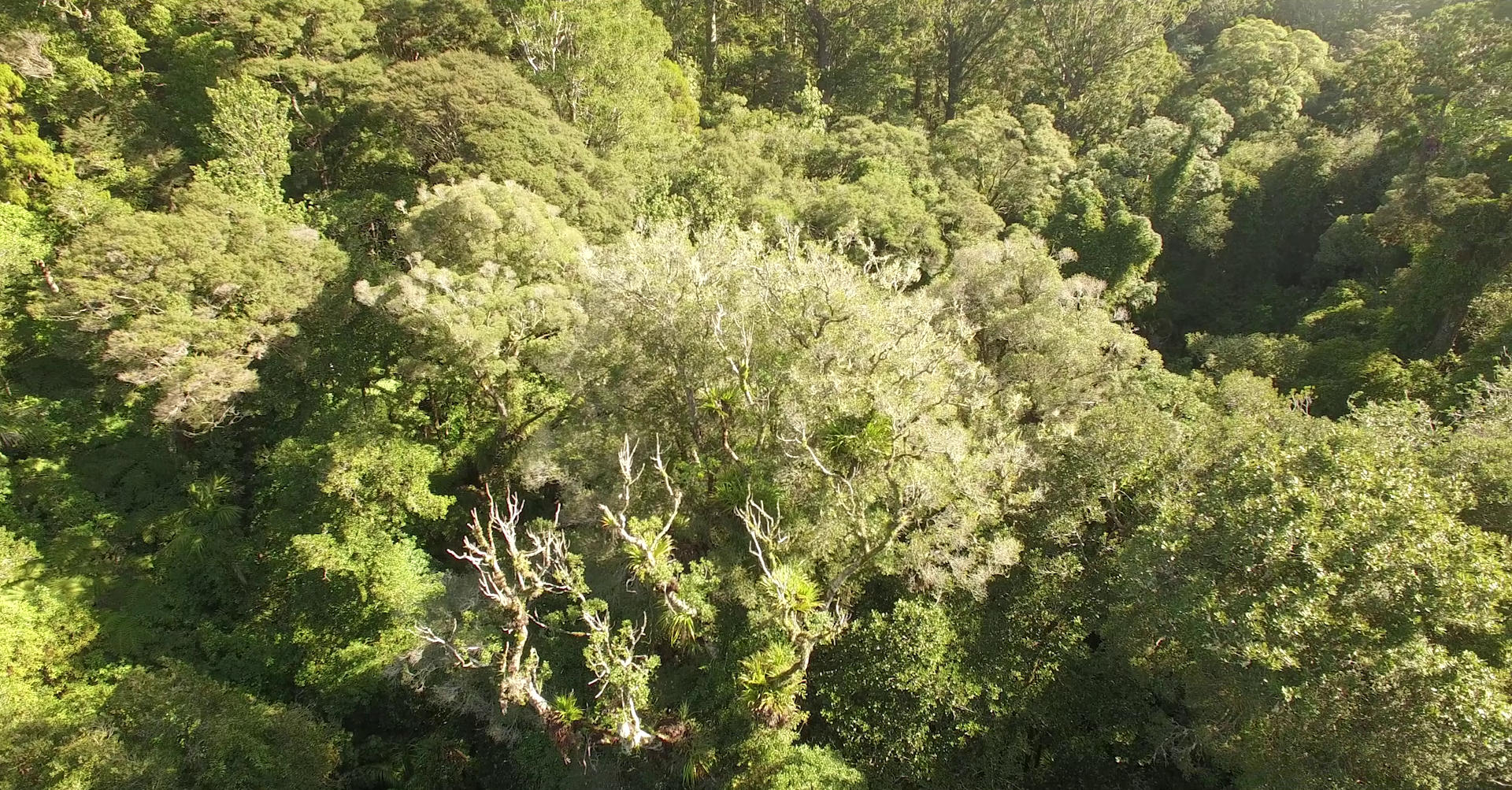 Let’s join the dots between collapsing native forests, possum density, thinning leaf litter, topsoil loss, dehydrated kiwi, and what this means in the context of the climate emergency.

The release of Forest & Bird’s drone footage shot above some of Northland’s native forests shows a tui eye view of the skeletal limbs of dead and dying pōhutukawa, rātā, tōtara and pūriri. This is intended as a wakeup call to all.

I would like to take you further, into the big picture repercussions of our collapsing native forests.

Northland’s summer of 2010 was a scorcher. A cruel drought that saw strange news articles warning about skinny kiwi staggering around Northland during the daytime suffering from severe dehydration. Explanations that the ground had become so dry that kiwi couldn’t poke their beaks beneath surface to feed. There were suggestions of putting out bowls of milk, water and even pet food on back doorsteps to keep our national icon alive.

It was the summer friends and I started to see a change. We saw different species of native trees in the bush, in paddocks and on stream sides pass a tipping point and die.

Initially I thought it was the drought only, but there was far more to it than that.

100 years ago possums were encouraged to invade lower North Island native forests to create jobs in a fur trade. But possums have only spread to Northland since the start of the 1960s. Many older people living north of Kawakawa can tell you when they saw their first possum and of pre-possum times when fruit trees were common on roadsides and gardens. Times when there were flocks of kākāriki, kākā and kūkupa. This is no longer the case. This is the toll of possums on top of introduced stoats, weasels, rats and cats.

Today’s great native forests north of Auckland survived waves of human colonisation. They survived native logging and being burnt for farmland or bowled for conversion into pine plantations. But now their greatest threat is introduced pests, namely possums and climate impacts. In much of Northland native forest pest control stopped 20 years ago or didn’t even start.

Trees that have had their leaves repeatedly scoffed by possums are under severe stress. They often have some leaf buds in reserve beneath the bark (epicormic shoots, they’re called) but after these are eaten there are not a lot of options. As the canopy gets thinner, branches die and the whole tree’s health goes downhill. Throw in a drought and some gales and down they come.

Let’s call it Native Forest Collapse. You can watch the result in the drone footage.

Leaf litter is an insulating layer of the forest floor with a massive surface area that holds moisture. It’s a habitat full of bugs, fungi, seed and much more. High possum densities mean that the marsupials turn canopy trees leaves into poo instead of leaves naturally falling to the ground to form leaf litter. Over many decades in areas of little or no consistent pest control, leaf litter has become thinner and thinner. Over time forest top soils are more exposed and prone to erosion, compacting and washing away.

Ultimately more sunlight hits the forest floor and dries it out, and hits weakened trees hard. But it was within this rotting detritus that the many species that wriggle and crawl make up the diet of kiwi.

It doesn’t matter how many dogs we have restrained, or stoats or feral cats killed, or incubated chicks are released after one year to help kiwi survive: when we have severe droughts, kiwi feeding habitat shrinks and makes them vulnerable. And this is much more extreme in areas where there is little pest control.

In the Northland summer of 2010, those who were looking saw many māmaku tree ferns die along with swathes of taraire and other native trees. The most obvious die-offs were trees in areas of high possum density and without sustained long term pest control.

We need living native forests as carbon sinks for survival. On the surface of the land, what else can lock up carbon with so many interlocking layers of forest giants, vines, ferns, epiphytes and sub-canopy shrubs? All with their equal balance of roots below the earth locking up carbon.

As Northland’s native forests have been falling apart, what impact has this had on the climate? The Washington Post recently reported these words following a study of climate change impacts on the Amazon Rainforest that neatly sums it up:

Trees store large amounts of carbon while they’re alive — but when they die, they release all that carbon back into the atmosphere… The release of carbon from forests has the potential to contribute to a kind of climate feedback loop: Warming temperatures cause drought, which kills trees and releases carbon into the atmosphere, which contributes to greater warming, which brings about more drought — and so on.

My alarm bells are ringing.

Demoralising restructures, underfunding and institutional paralysis within the Department of Conservation have played their part. Governments have fiddled while our native forests have fallen apart and all the while feeding the climate catastrophe.

There are all sorts of measures we need to take to urgently reign in greenhouse gas emissions. Sure we can plant trees, but we need our greatest living carbon sinks on land to be as healthy as possible to retain carbon and survive the turbulent times ahead.

The Government bringing five million hectares of public conservation land under sustained multi-species pest control would be a commitment in the right direction. And Northland itself needs a ten year financial commitment from the Government to bring these native forests back.

We need our native forests in a healthy state more than we probably realised.

Dean Baigent-Mercer has often invisibly been involved with the key environmental campaigns within Aotearoa over the past twenty years. Sometimes writer/researcher, sometimes activist, sometimes pest controller or mead maker, he has worked nationally and internationally with Greenpeace and across these islands with Forest & Bird and other NGOs.