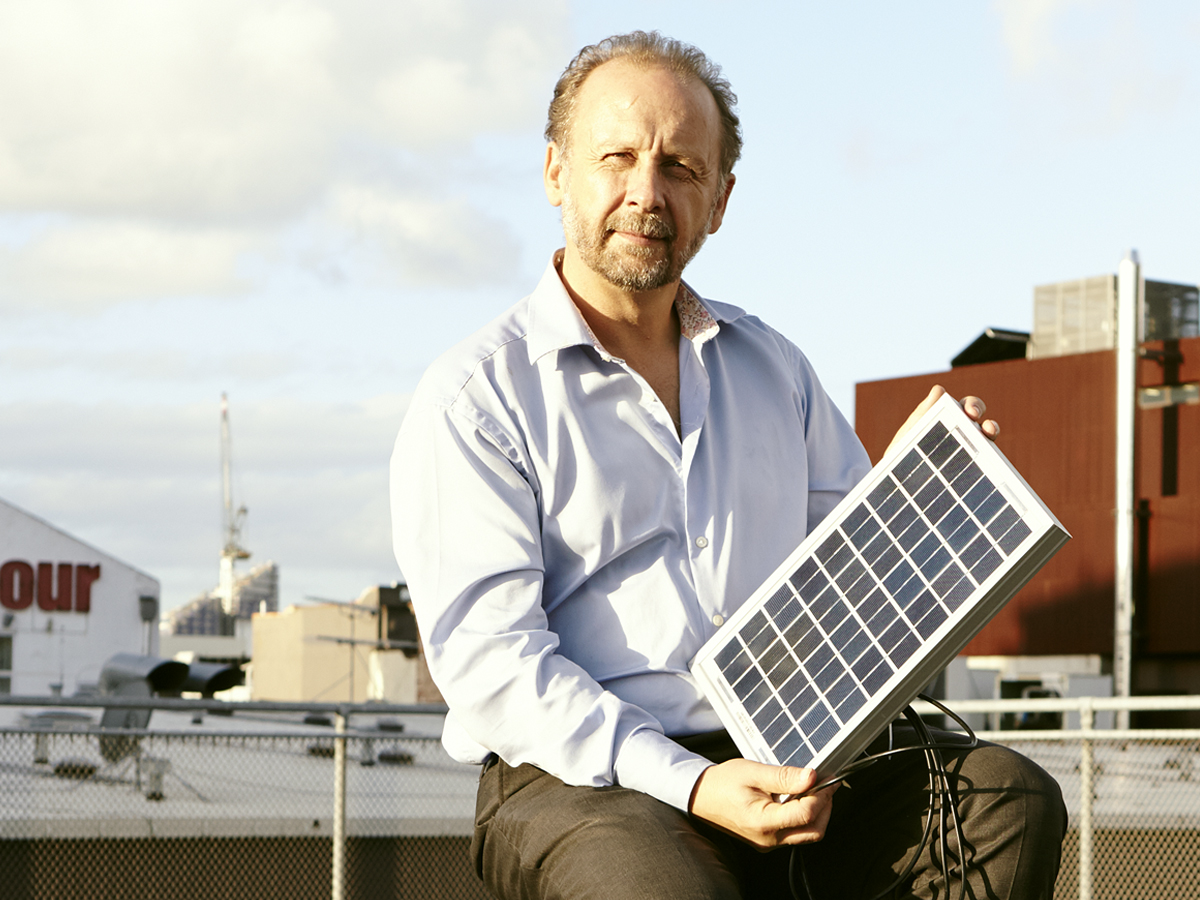 Eco warrior turned solar energy innovator Andy Booth has a vision for New Zealand. The former Greenpeace director would like us to win the global race to become the first country to be 100% powered by renewable energy.

“Most New Zealanders want to do right by the environment, and we have a history of leading the way on environmental issues – just look at our decision to ban nuclear-powered ships,” says Andy.

“We already pay among the highest prices for power in the OECD, so switching to cleaner, cheaper energy sources makes economic and environmental sense.”

Renewable energy comes from sources that are replenished as fast as they are used, such as sunshine, wind, water and geothermal heat.

About three-quarters of New Zealand’s electricity generation is from renewable resources, which is the fourth-highest in the OECD.

But only about 38% of our primary energy supply – the energy sources that occur naturally, like fossil fuels, wind and sunlight, before they are used to make secondary energy sources such as electricity – come from renewable resources.

As CEO of solar power company SolarCity, Andy believes clean energy from the sun is the key to our future energy independence.

He says solar energy is rapidly becoming the cheapest unsubsidised form of energy in the world, with the potential to create jobs and economic growth for Kiwis while providing a cheaper, more stable and more secure energy system.

Renewable energy is one of seven key areas identified by Pure Advantage as having the potential to grow New Zealand’s economy without damaging our natural environment.

Pure Advantage, which was set up by business leaders to challenge Kiwis to build businesses that use natural resources in a sustainable way, believes renewable energy will help New Zealand to reduce its reliance on polluting hydrocarbons, develop more green industries and radically improve the country’s balance of payments.

Andy has a long history of fighting climate change. He started working on Greenpeace’s first-ever climate change campaign when his daughter was born, and she’s now 27.

He was living in Nelson – one of New Zealand’s sunniest cities – when he sold the global video communications company he’d co-founded and began investigating why solar power hadn’t been as widely adopted in New Zealand as it had been elsewhere.

The US solar industry now provides 209,000 jobs, far outstripping the 67,929 jobs left in the coalmining industry.

But here in New Zealand, many Kiwis simply didn’t have the cash to pay the $10,000 needed on average per household to install solar panels.

So Andy and his business partners set up SolarCity in 2009 to try to revolutionise the energy market by taking away the upfront charge.

SolarCity installs solar panels, provides insurance, monitors performance and replaces aged and faulty equipment for the next 20 years. After the term is up, customers can extend their service agreement, upgrade to the latest tech, or return to grid power.

Homeowners and businesses pay a fixed monthly fee that is less than the average rate if they were buying power from the national grid. If they move, they can take their panels with them or transfer their service agreement to the new owners.

“We give people the ability to buy power from their roof at a price that is cheaper than the current price, and to fix the price for 20 years. As well as slashing their power bills, they are cutting carbon emissions and helping to protect the environment for the future,” Andy says.

Andy says SolarCity has now put more Kiwi-made solar panels on homes and businesses than anyone else.

The company is also installing large solar power systems across the Pacific. In the tiny island nation of Nauru, SolarCity installed a solar generation system and seawater desalination plant to provide local people with fresh drinking water and reduce their dependence on diesel.

“It has been bloody hard work, and we’ve faced massive political challenges from people who don’t think solar is the right way to go,” says Andy.

“But I’m convinced that solar power is the best way to reduce the carbon emissions that drive climate change. New Zealand has a long history of leading the way, and if we get renewable energy right we could protect the environment and become an economic powerhouse in the future.”